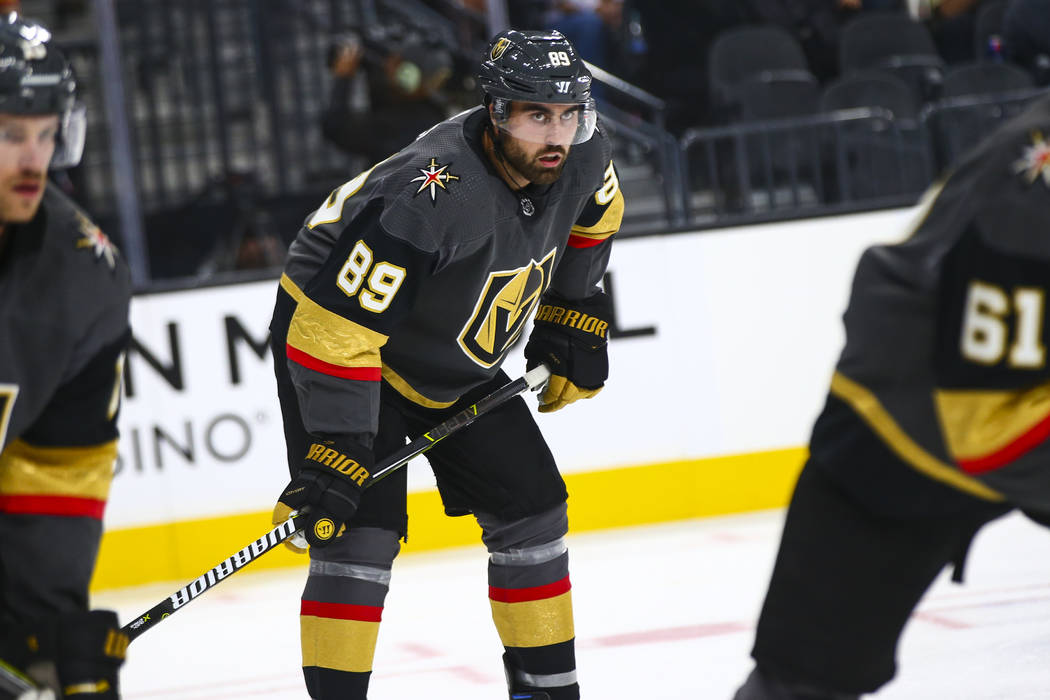 The Golden Knights will be without right wing Alex Tuch for their season opener Wednesday against the San Jose Sharks. They might be without center Cody Eakin, too.

That opens the door for top prospect Cody Glass to stick around.

Tuch is week to week with an upper-body injury, coach Gerard Gallant said Saturday, after crashing into the end boards with 11:23 left in the second period of Friday’s preseason game against the Los Angeles Kings at T-Mobile Arena.

Eakin, who left in the third period, is day to day with an upper-body injury, and Gallant said the team will “wait and see” if he can play against the Sharks. If he can’t, the future may be now for Glass.

“It’s a great opportunity for him,” Gallant said of the 20-year-old center. “He’s had a great camp.”

Glass, the No. 6 overall pick in the 2017 NHL draft, centered the Knights’ second line at practice Saturday with Eakin injured. Center Paul Stastny moved to the third line.

Playing between left wing Max Pacioretty and right wing Mark Stone should be a good test for Glass. He’s been decent five-on-five in the preseason (his lines have created 25 scoring chances and allowed 22), but he’s looked dynamic on the power play.

“It was a lot of fun, actually,” Glass said of playing with his new linemates. “They make it a lot easier on yourself. It’s going to take some time to get used to. It’s just one practice together. We’ll see if I’m playing in the game tomorrow or not. Hopefully, I can gain some chemistry with them.”

To adjust for Tuch’s absence, the Knights moved Valentin Zykov to third line right wing and inserted Brandon Pirri at left wing. Tuch, 23, has yet to appear in a season opener after starting 2017-18 in the minors and last year on injured reserve for eight games.

Center William Karlsson notably didn’t take a single draw in Friday’s game. Gallant said new rules, which allow an offensive team to pick the faceoff location in four scenarios, caused the team to give Jonathan Marchessault and Reilly Smith a look on draws.

Marchessault, who has a career 42.9 winning percentage on faceoffs, won five of his 11 draws. Smith (also 42.9 percent) won one of three.

“We’re switching sides all the time, and we know what Karlsson can do in the faceoff circle,” Gallant said. “Marchessault is pretty good, too. Just ask him.”

Thanks to the @GoldenKnights for a great time! Excited to get things going with the @FWKomets ☄️

The Knights have two goaltenders on their roster: starter Marc-Andre Fleury and backup Malcolm Subban.