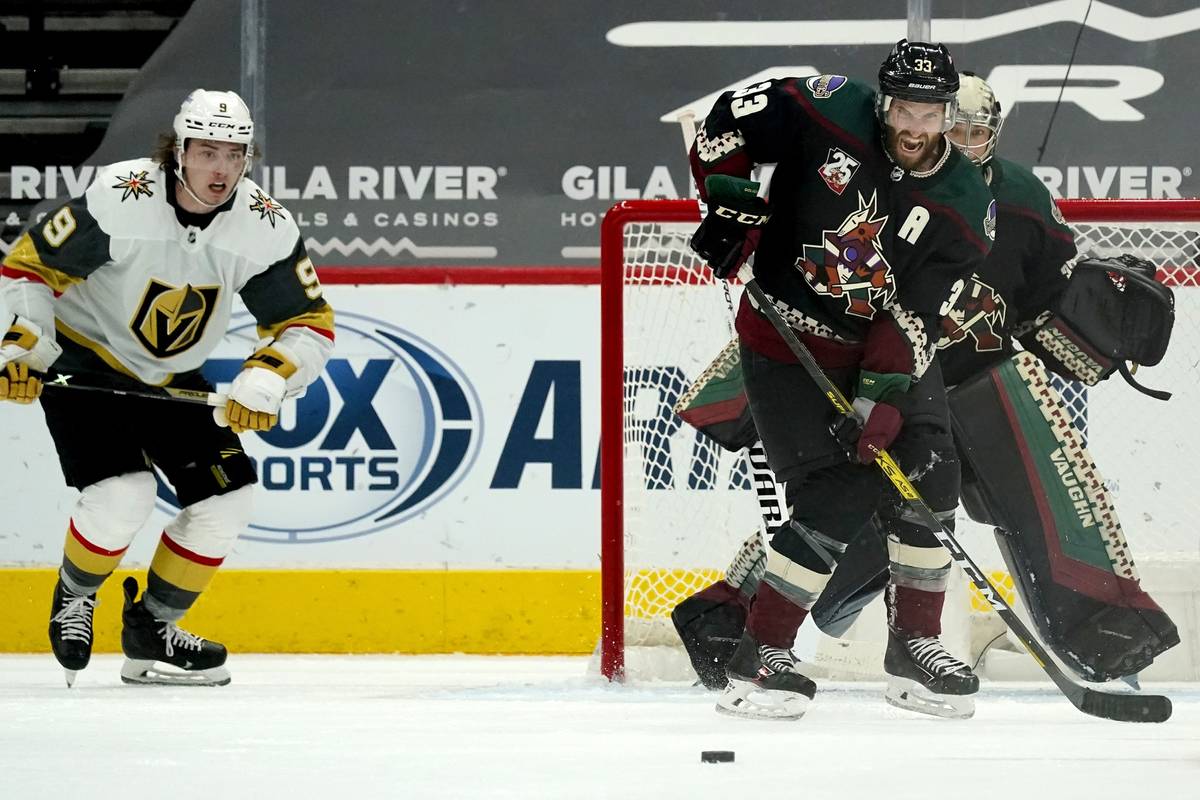 Arizona Coyotes defenseman Alex Goligoski (33) reacts as he watches the puck in front of Coyotes goaltender Darcy Kuemper, right, as Vegas Golden Knights center Cody Glass (9) moves in just prior to his shot for a goal during the third period of an NHL hockey game Friday, Jan. 22, 2021, in Glendale, Ariz. (AP Photo/Ross D. Franklin)

But coach Pete DeBoer sounded as if he was talking about an ex-wife when he insinuated the struggles on the power play Friday sucked the life out of the Knights in their first loss of the season.

Those units were the focus of practice Saturday before the Knights wrap up their four-game series against the Arizona Coyotes with a Sunday matinee at Gila River Arena.

“We’re five games in with some new concepts, some new units,” DeBoer cautioned. “We’re just not connected as a group out there yet. But I believe it’s coming.”

The Knights went 1-for-4 with the man advantage in Friday’s 5-2 setback and are 2-for-18 overall, though they’ve scored a power-play goal in two straight games, to be fair.

Part of the reason for their slow start goes to Arizona — DeBoer slipped and called them Phoenix during his news conference — which is ranked third in the NHL on the penalty kill since Rick Tocchet took over as coach in 2017.

But, as DeBoer noted, the Knights aren’t generating enough momentum with their power plays regardless of whether they score, and Arizona has in turn fed off its penalty kill.

The Knights had three shots on goal during their four power plays Friday, the same number they generated short-handed.

“I’m very confident in the personnel and in the plan. I know we’re going to get it together.”

The Knights spent time before practice Saturday drilling power-play zone entries with assistant coach Steve Spott, who is running the units after assistant Ryan Craig was in charge the past three seasons. They also spent a significant portion of time working on the power play once the full practice began.

That group was on the ice together in the third period when Glass deflected in Stone’s pass to cut the Coyotes’ lead to 4-2 with about nine minutes remaining.

Pietrangelo, who was signed to a seven-year, $61.6 million contract in part to upgrade the special teams, has one secondary assist on the power play. His 8.7 shots per 60 minutes on the power play, according to HockeyReference.com, is the second-lowest of his career.

“A power play, or special teams specifically, you get that comfort, you get that kind of smoothness of play, knowing where guys are at, you get that through reps and experience and just playing the game,” defenseman Alec Martinez said. “Without the preseason, that wasn’t really an option, so I think that’s kind of why you see, I wouldn’t necessarily call it struggling, but just, you know, timing’s a little bit off, things like that.”