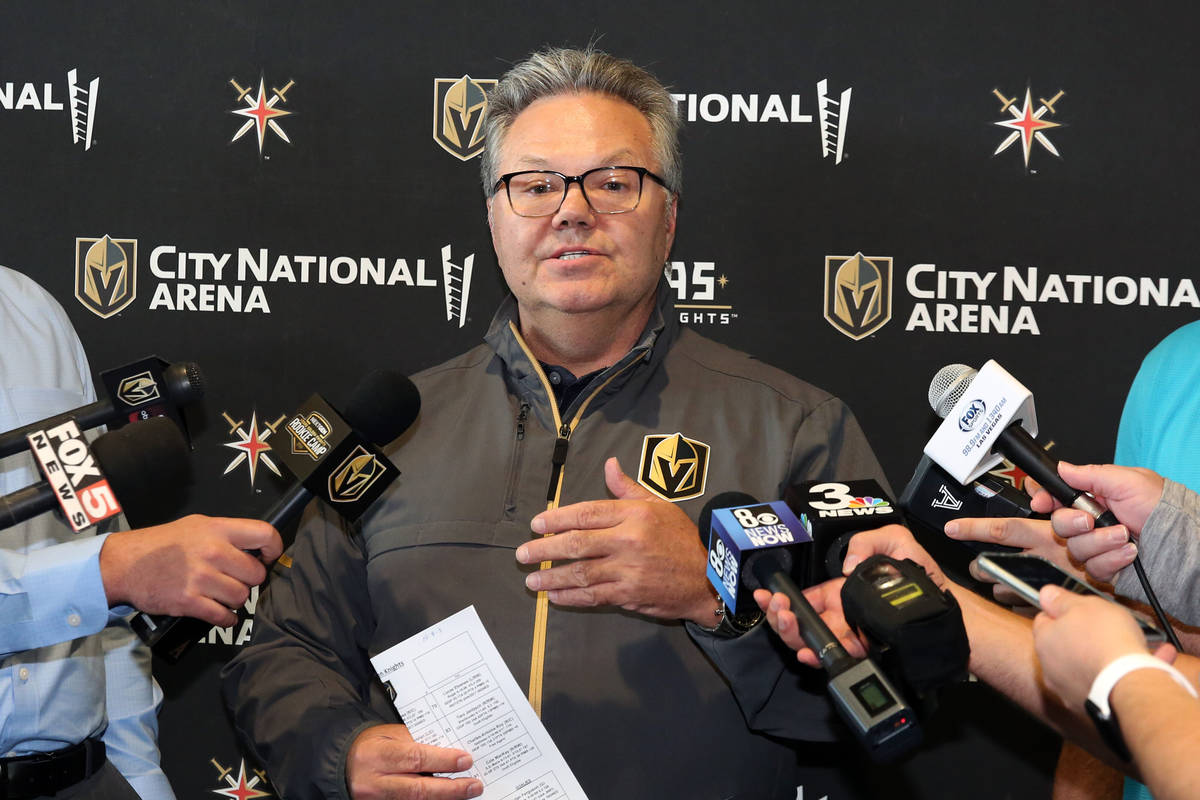 Here is an edited transcript of his introductory statement and the question-and-answer session that followed:

McCrimmon: “Today, we completed a trade with the Chicago Blackhawks for Marc-Andre Fleury and just to give people on the call some background on two things — the rationale behind it as well as the process that we used throughout. These were conversations that began that began between Marc-Andre and myself at our exit meetings on June 29. At that time, I told Marc that I couldn’t say for sure what we would do with our goaltending for the upcoming year. I said to him I wanted to treat him professionally, to treat him with respect, and I wanted to have open lines of communication. I wanted him to be fully aware of any discussions that I might have with teams. I wanted him to be completely comfortable if he heard rumors or saw things out there that made him uncomfortable or made him curious that he should feel free to call me. We spoke many times from that day up until as recently as Saturday for (when) I spoke with his representatives for the final time.

“On July 12, we spoke three times. I made Flower aware of Chicago’s interest. We had an open discussion about that. Any other team that I spoke to or any other team that contacted me from the time that I met with Marc-Andre on June 29 up to and including a new team that contacted me for the first time on Saturday, of which I made them aware. So I think the communication throughout this process was very good. I told Marc at the exit meeting I want to be able to look him in the eye … and make him feel that he’s been treated professionally throughout this time frame.

“We’ve been really fortunate we have two great goaltenders in our organization in Marc-Andre and Robin Lehner. I give both players a lot of credit. We made the decision to go with that tandem last year based on a number of factors. We collectively won the Jennings Trophy. Marc-Andre individually won the Vezina Trophy. We had 40 wins, which was tops in the NHL. We tied for the Presidents Trophy. We had a successful playoff. We definitely benefited from both of those goaltenders. I think that when you looked forward to this year, I think that same scenario might have a little harder to manage. I mentioned just a minute ago that I give both Marc-Andre and Robin a great deal of credit for how they handled it, but I also know also that these are two goalies that are both starters and I don’t know that it would’ve been the same appetite to do it the same way from those players. Neither goaltender to their credit expressed any concern or any issue. It was, I guess, more my own observations with respect to that. My job is to try to make our team better, and to do that you need cap space to improve.

“I would like to thank Marc-Andre Fleury for his time in Vegas. It’s incredible the moments that we shared with him as part of our organization. He was the most popular player I’ve ever seen in sports. He was the face of the franchise. If you think back to how it all began, the storybook first season, the passion that he has for the game as both a teammate and a player that’s connected to the fanbase. I want to recognize his great accomplishments for his time here. He’s had a tremendous impact on our organization. He’s had a tremendous impact on our city. So I know for a lot of people, this is a day that is definitely filled with sadness. Certainly, I share all those same emotions that you do, and yet I do feel I’m responsible to try to do everything I can to put the best team on the ice. That’s what I’m going to keep on doing along with the other people in our hockey operations.”

Question: Can you speak to the control you don’t have in situations like this, whether it be agents, the other team? You can’t really tell them what to do, I would assume, in terms of releasing stuff and how difficult it is to get through times like this when you’re not really in control other than what you guys do. The second part of that, in relation to past announcements, do you feel like you guys have always done your best to make sure (players) are aware of it before it would hit social media?

McCrimmon: “I think with respect to the first part of your question, one of things you open yourself up to when you share information is that information might go elsewhere, might be used differently. I think as time went on, we felt that was happening, so we tightened up our circle a little bit at the end. But at the same time, I knew all of that going into it, and it was more important to me to be open and transparent with Marc-Andre than any potential risks there might be by making that circle bigger than what you might ordinarily. So I’m really comfortable with the way we chose to do it.

“With respect to how things get out, you guys are in the business. There’s rarely any news a team announces — and I don’t just mean our team, I mean in sports — that it isn’t out there in advance. Of course, if you’re the team, you can’t speak to things or announce moves that your team has made until they’re final.”

McCrimmon: “Marc-Andre wanted to play in Vegas. That never changed. I don’t think that’s a surprise to anyone on the call. That was his No. 1 preference. With decisions that he might make moving forward, this is a player that is at the very top of his game, I believe will be a candidate to play on the Canadian Olympic team. So I sure think he would play this year, but those are things I would leave he or others to speak about.”

Question: Did you consider moving Robin Lehner as well, or was your sole focus on moving Marc-Andre Fleury?

McCrimmon: “I think that any of those types of discussions stay internal.”

Question: With the salary cap space available, how does this set up Vegas for another move, whether it’s in free agency or a trade?

McCrimmon: “We’ll use our resources to work to make the team as strong and competitive as possible. There’s never any guarantee you’re going to be able to do the things that you’d like to do. There are a lot of players in play, obviously, as you get to free agency if that’s the route that we go.”

McCrimmon: “Bill had a really special relationship with Marc-Andre. I do not suspect that’s going to change moving forward. I know they were very close. Bill thinks the world of Flower, and I know that Flower has a great deal of respect for Bill. But, again, for me, I try to do what I believe is in the best interest of the Vegas Golden Knights. Every decision that we make is based on the same thing.”

Question: Do you anticipate adding another goalie or promoting Logan Thompson from the Silver Knights?

McCrimmon: “We’ll look to add a backup goaltender here. In the next couple of weeks, I’m sure we’ll be able to add to that position.”

Question: Will be a tandem style or will Lehner be expected to carry more of a traditional game load in the upcoming season?

McCrimmon: “The days of a goaltender playing 60 to 65 games, I think we’re moving away from that. … We are quite comfortable that Robin is a real good starter. His workload will reflect that, but at the same time, we want Robin to be at his very best. I feel strongly for your starter to be at his very best, you have to have a backup you can trust, that can get you wins, that can allow you to use your starter to the best of his ability.”