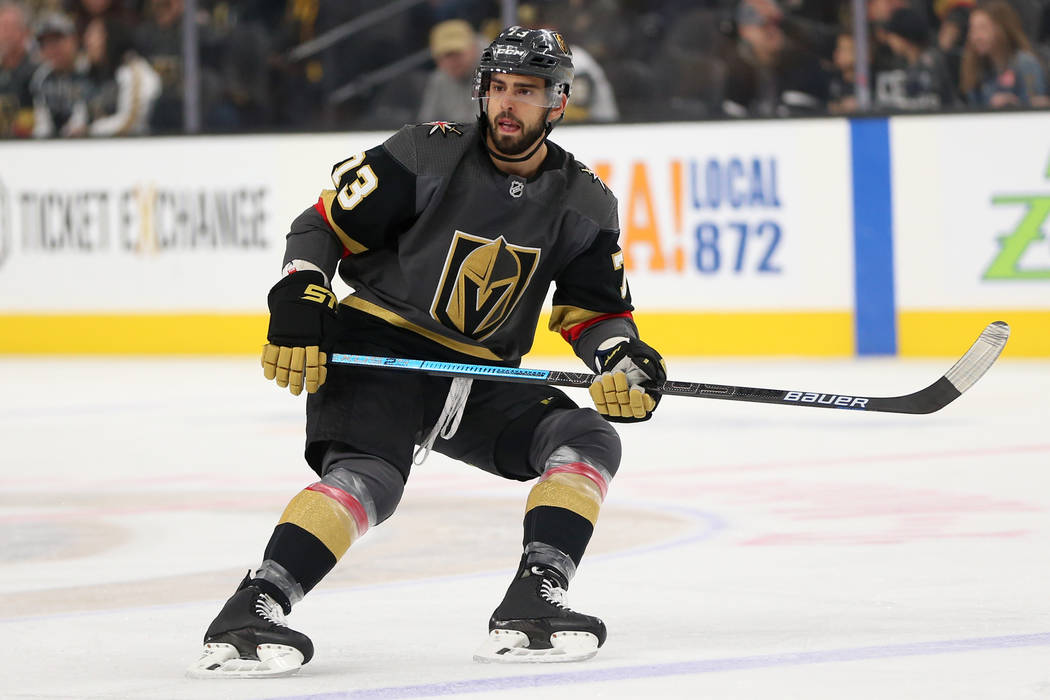 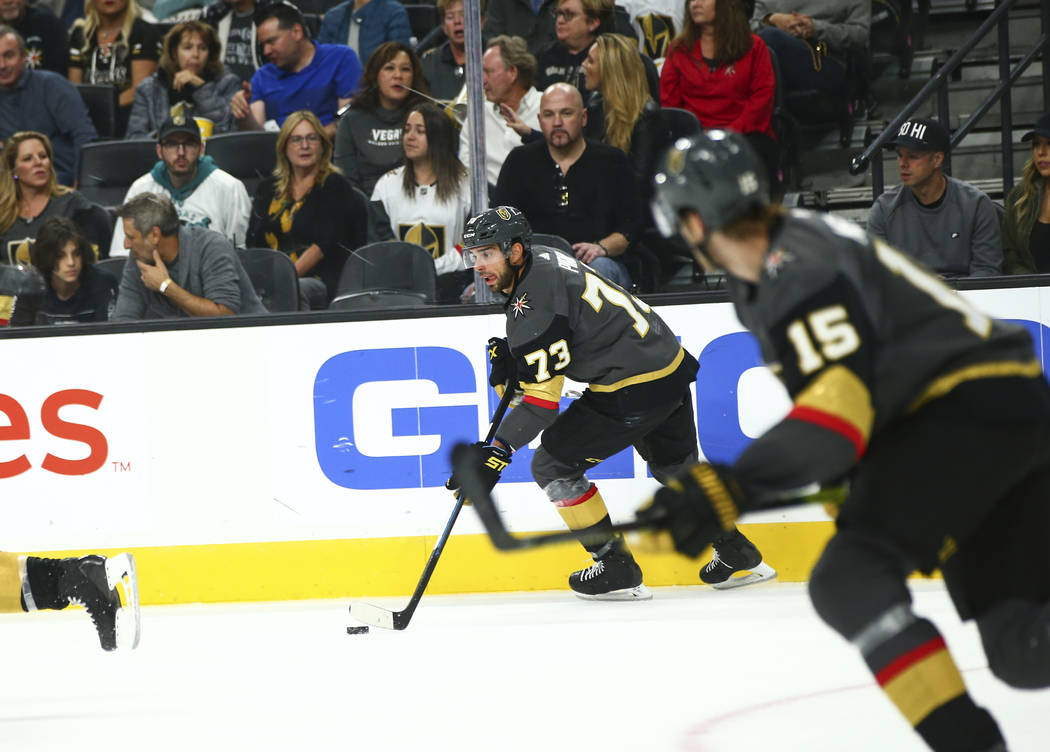 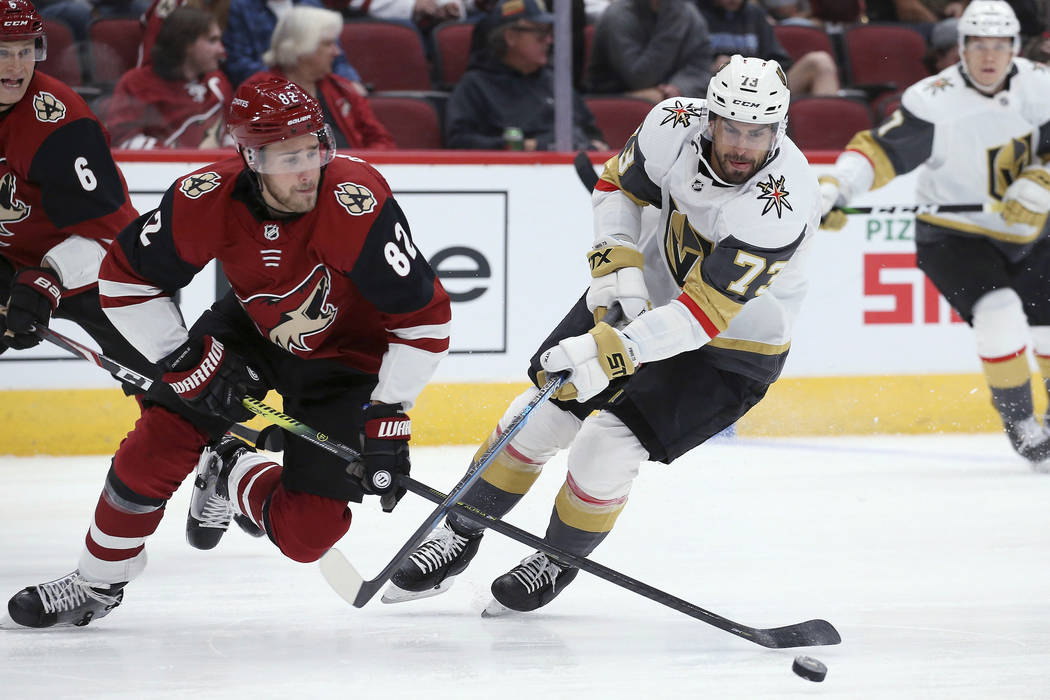 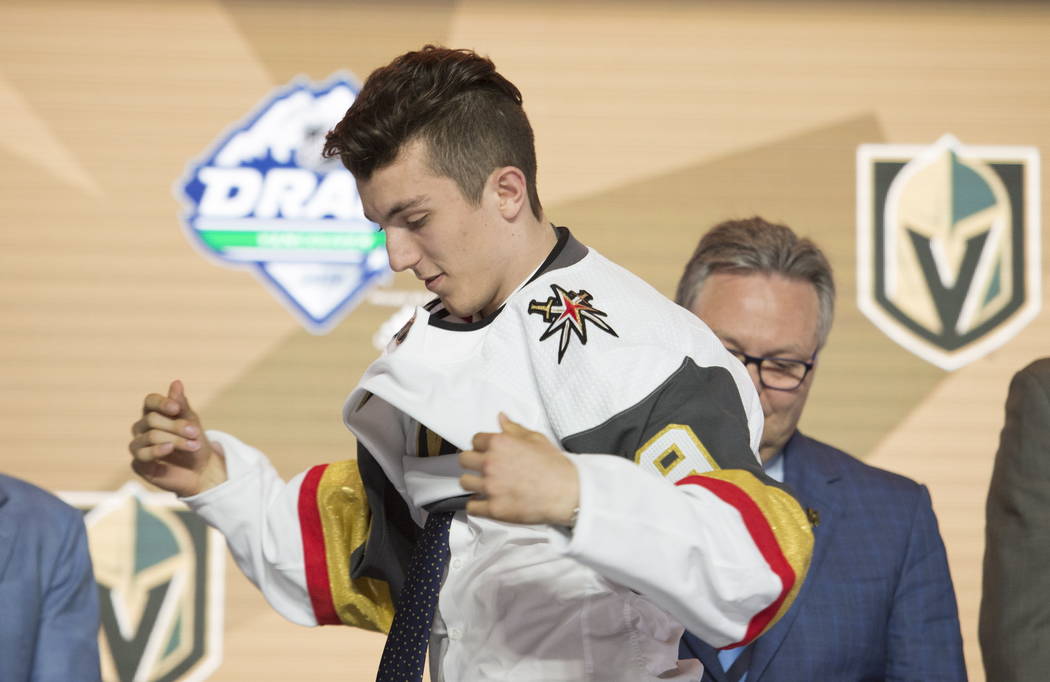 Peyton Krebs puts on a Vegas Golden Knights jersey during the first round of the NHL hockey draft Friday, June 21, 2019, in Vancouver, British Columbia. (Jonathan Hayward/The Canadian Press via AP)

Golden Knights left wing Brandon Pirri was called up from the American Hockey League in December and went on a scoring tear.

Less than a year later, he’s on waivers. The Knights exposed him Saturday after a rough start to his season that featured no goals and one assist in 11 games. The other 30 NHL teams have the chance to add Pirri to their roster before he clears waivers at 9 a.m. Sunday. He could be sent to the Knights’ AHL affiliate, the Chicago Wolves, if he clears.

When asked why Pirri had yet to produce, coach Gerard Gallant said: “I don’t know, talk to him.”

Pirri, 28, scored seven goals in his first eight games for the Knights last season. He finished with 18 points (12 goals, six assists) in 31 games.

That production hasn’t continued this season after he signed a two-year contract worth $775,000 annually in the offseason. Pirri was a healthy scratch in six of the Knights’ previous eight games entering Saturday. Right wing Alex Tuch’s return from injury and rookie Cody Glass’ emergence left no room for him in the lineup.

Now Pirri gets the chance to see whether any other team has room for him.

The Knights signed 2019 first-round pick Peyton Krebs to a three-year, entry-level contract Saturday, a day before he is expected to play his first game since suffering a partially torn Achilles tendon before the NHL draft.

Krebs spent most of his time rehabbing after becoming the 17th overall pick in June. He recovered under the Knights’ supervision in Las Vegas and practiced with the team Tuesday.

But Friday, the 5-foot-11-inch center was reassigned to his major junior team, the Western Hockey League’s Winnipeg Ice. He’s expected to play his first game Sunday.

“He’s battled really hard to get back,” defenseman Nate Schmidt said Tuesday. “He’s got a lot of skill. Shifty little player. I’m excited to see what he can do.”

Saturday’s 1 p.m. puck drop was the Knights’ earliest of the season.

Tuch said it reminded him of youth hockey, when he played in tournaments with multiple games in one day.

“I love it. You don’t think too much,” Tuch said. “You roll out of bed and play some hockey.”