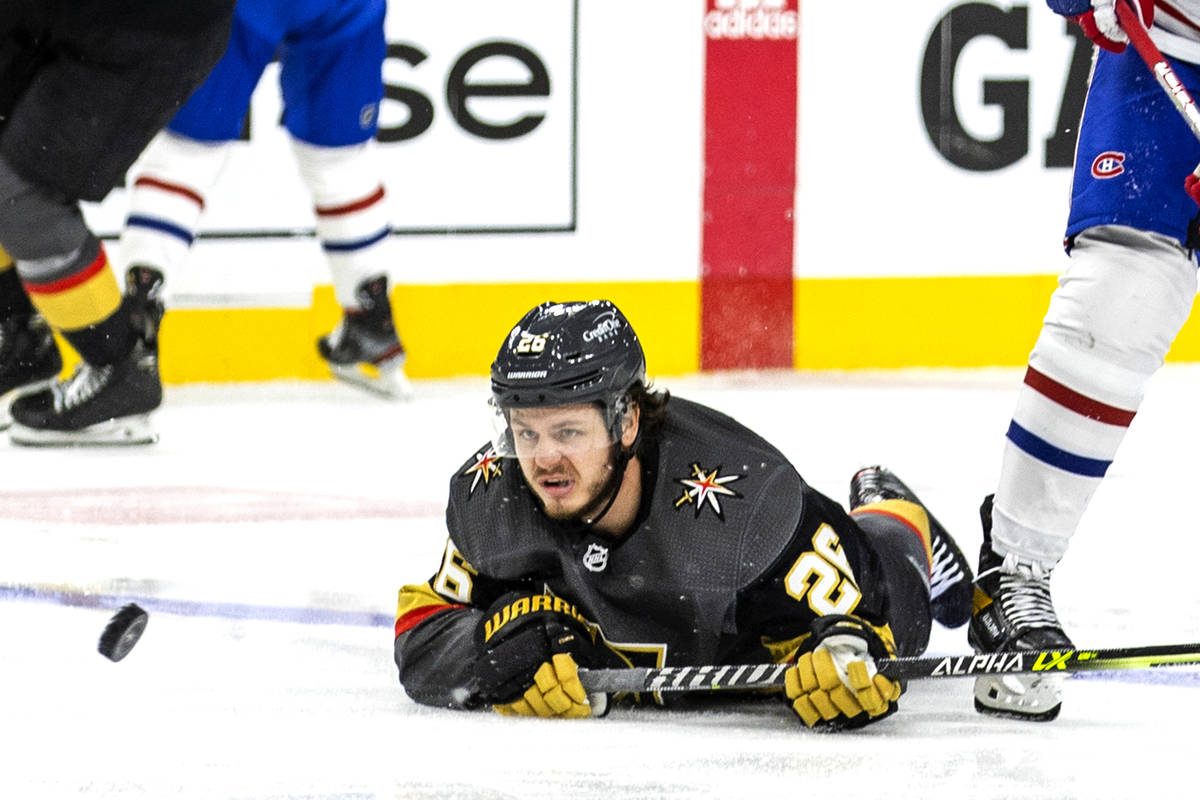 Golden Knights center Mattias Janmark (26) looks to a puck that just gets away on a drive to the goal versus the Montreal Canadiens during the third period of Game 2 of an NHL hockey Stanley Cup semifinal playoff series against the Montreal Canadiens at T-Mobile Arena on Wednesday, June 16, 2021, in Las Vegas. (L.E. Baskow/Las Vegas Review-Journal) @Left_Eye_Images

Mattias Janmark described himself as a “short-term add” in his exit interview following the Golden Knights’ season.

Turns out, he was wrong.

The left wing signed a one-year, $2 million contract to stay in Las Vegas on Wednesday after NHL free agency began. It represents a slight pay cut for Janmark, who played on a one-year, $2.25 million deal last season.

The 28-year-old fit in well with the Knights after being acquired April 12 from Chicago for a second- and third-round pick ahead of the NHL’s trade deadline. The team also sent a fifth-round pick to San Jose to retain part of Janmark’s salary.

Janmark played mainly on the Knights’ third line and became a speedy partner for right wing Alex Tuch. He had five points in 15 regular-season games before becoming a key playoff contributor. Janmark had eight points in 16 games in the postseason, including a Game 7 hat trick in the first round against Minnesota.

Janmark said he hoped to stay in Las Vegas after the Knights lost in the NHL semifinals but thought the team’s salary cap restraints would make it difficult.

“It’s a place that I want to be in, for sure, but I know what the situation is, and I just try to play my hockey and we’ll see where it goes from there,” Janmark said in June. “I loved every minute of it here, and, for sure, I can see myself playing here longer, but it’s a little more complex than that.”

The Knights still have to find a way to make the money work after retaining Janmark. They are approximately $1.8 million over the salary cap after their moves Wednesday and need to sign restricted free agent Nolan Patrick.