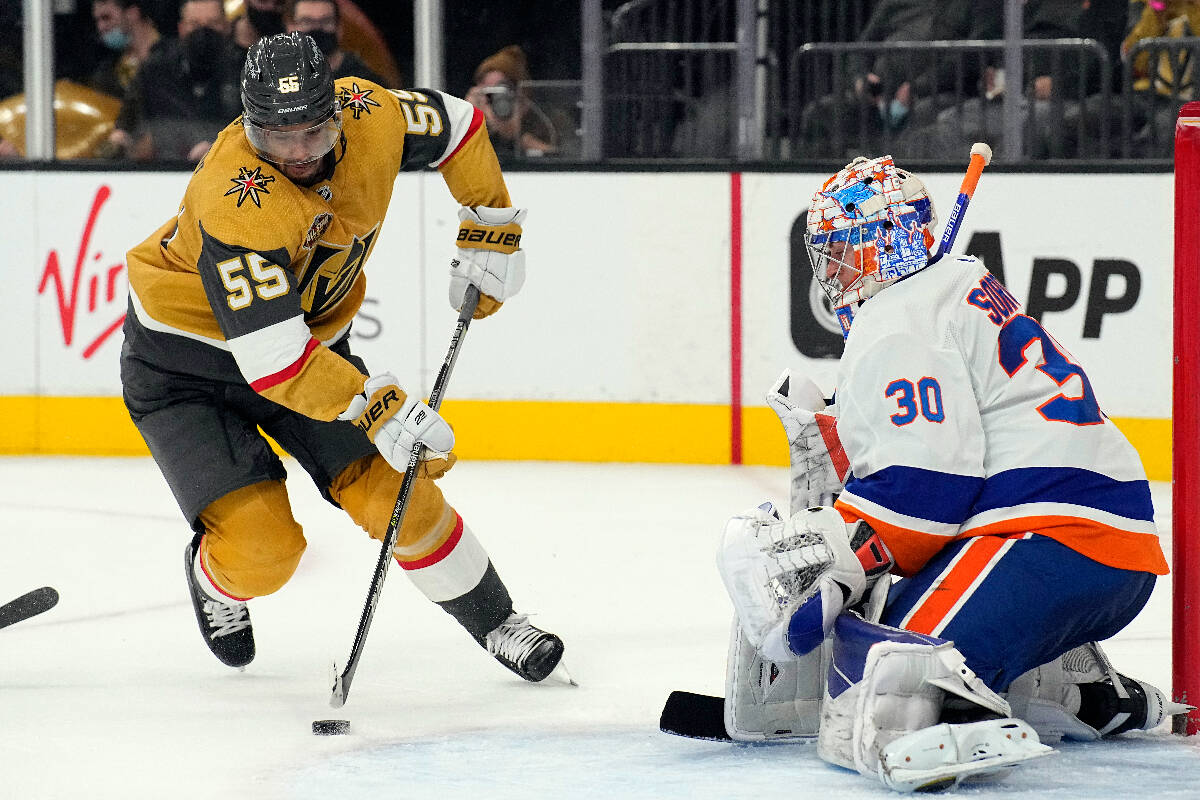 ■ 3. Knights goaltender Robin Lehner — He gave his team a fighting chance despite facing a barrage of scoring chances in the first period and a third-period penalty kill. He finished with 24 saves.

■ 2. Islanders center Mathew Barzal — He was dazzling with the puck on his stick and scored a highlight-reel goal in the third period. He was at the bottom of the right faceoff circle but still elevated the puck past Lehner and into the net.

■ 1. Islanders goaltender Ilya Sorokin — The 26-year-old was excellent playing for the second time in two nights. He made 42 saves, including two outstanding stops on Knights right wing Keegan Kolesar in the second period.

The play itself wasn’t spectacular. A rebound bounced to Bailey by the left post and he scored. But it was important because of the hole it put the Knights in.

The Islanders are a spectacular defensive team and don’t give up leads easily. They were 48-11-9 entering Sunday’s game when scoring first over the last three seasons. They were also 41-2-4 when leading after two periods, and Bailey’s goal was the only score through 40 minutes.

5 — The number of four-game losing streaks the Knights have had in their history after Sunday’s loss. It was also the fourth time they lost four games in a row in regulation.

The last time that happened, from Jan. 7-14, 2020, the team fired coach Gerard Gallant and hired Pete DeBoer. The Knights had never lost three straight in regulation under DeBoer entering this season.

Sunday was the third time coach Barry Trotz appeared at T-Mobile Arena since winning the Stanley Cup at the rink with the Washington Capitals.

He joined the Islanders in the 2018 offseason and has since led the team to three playoff berths and two appearances in the NHL semifinals.

“I think that his teams just respect him,” said Knights center Chandler Stephenson, who made his NHL debut under Trotz and was part of Washington’s Cup-winning team. “Not many mistakes in their game.”

COVID-19 restrictions meant his parents couldn’t travel to see his first four games in person. This season, however, his mom came for the Knights’ home opener and his dad arrived this week to see him play at T-Mobile Arena.

“It’s been awesome having them here,” Krebs said. “It’s been special.”