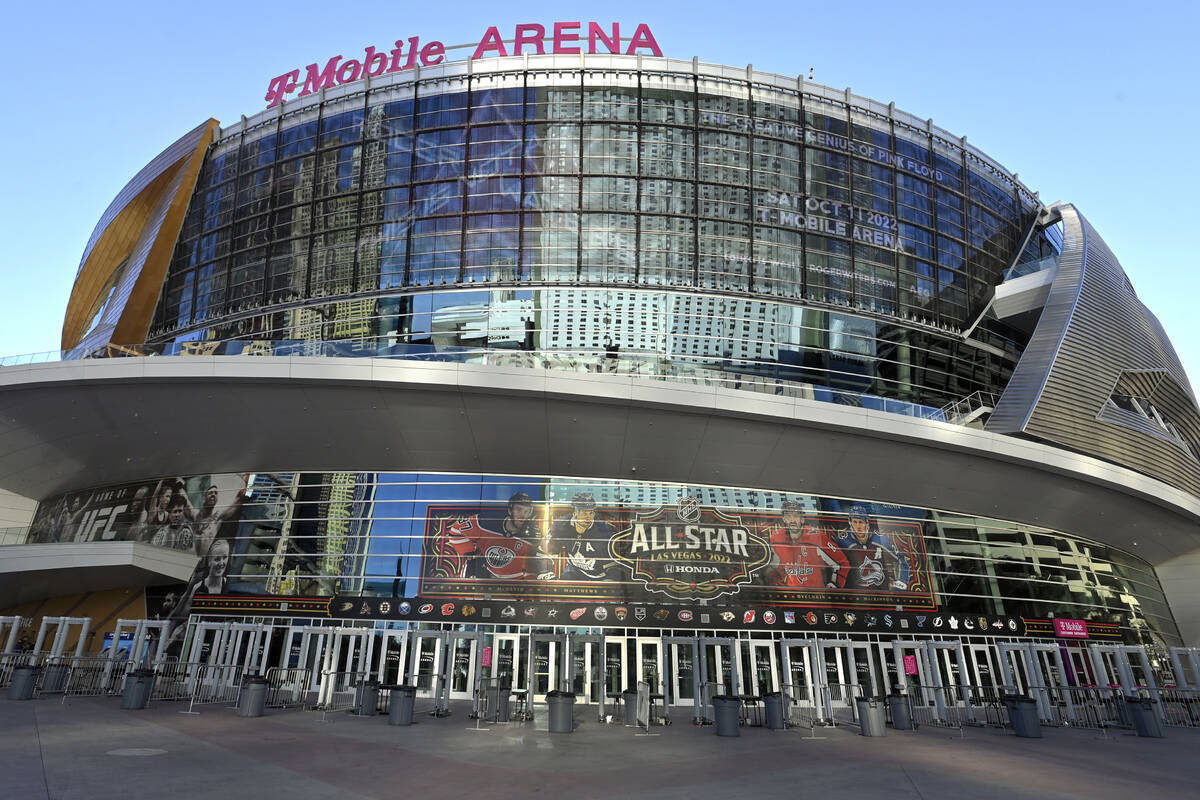 T-Mobile Arena stands in Las Vegas before an NHL hockey game between the Vegas Golden Knights and the Buffalo Sabres on Tuesday, Feb. 1, 2022, in Las Vegas. The arena is the site for this year's NHL All-Star game. (AP Photo/David Becker) 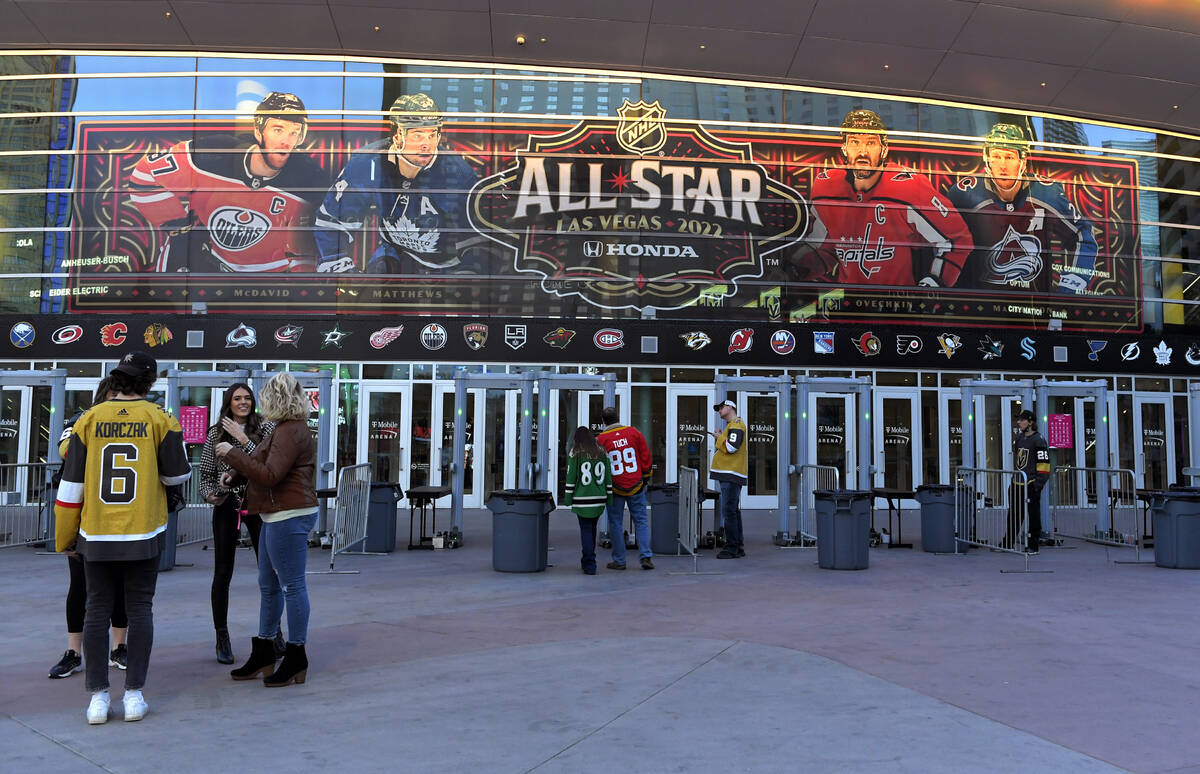 Fans line up before an NHL hockey game between the Vegas Golden Knights and the Buffalo Sabres at T-Moblie Arena Tuesday, Feb. 1, 2022, in Las Vegas. The arena is the site for this year's NHL All-Star game. (AP Photo/David Becker)

NHL All-Star Weekend in Las Vegas owes a debt to the Golden Knights’ trip to the 2018 Stanley Cup Final.

The league’s creative team knew it had to be bold, audacious and daring to stand out during a tremendous sports weekend in one of the entertainment capitals of the world. So the group, led by NHL chief content officer Steve Mayer, flashed back to something it had pulled off June 7, 2018, before the Knights lost to the Washington Capitals in the decisive Game 5 of the finals.

The pregame entertainment before puck drop featured lights, instruments and the Las Vegas band Panic! at the Disco singing their song “High Hopes.” It all just happened to be on a floating stage in the middle of the Bellagio fountains.

“We as event producers do this all the time,” Mayer said. “You hope nothing goes wrong, but you really hope you can do something that you’ll remember for a lifetime. That was one of those events like ‘Wow, that was so cool.’”

That inspiration pushed the team to create events as memorable as possible for the skills competition Friday and the All-Star Game on Saturday at T-Mobile Arena. Pucks are going to fly into the fountain and a giant deck of cards is going to hang from Las Vegas Boulevard.

The NHL knows the bar for a memorable event in Las Vegas is high, and the league has put a lot of effort in attempting to clear it.

“How do you do something in this town that actually gets people to talk a little bit?” Mayer asked. “And when you leave town, gets them to remember what you did? That’s not easy to do. And I hope that we accomplish that.”

Knights owner Bill Foley said “100 percent” he always wanted to have an All-Star Game in Las Vegas. Team president Kerry Bubolz said the club first had conversations about hosting All-Star Weekend in its inaugural season of 2017-18.

The Knights knew they weren’t likely to host anytime soon. But they did want the possibility on the NHL’s radar. The league went to Tampa, Florida, in 2018, San Jose, California, in 2019 and St. Louis in 2020 before skipping the event during its pandemic-shortened 2021 season.

The two sides decided Las Vegas would be the place to bring it back in 2022. The unique aspect of it was the Knights didn’t have to do much selling to make it happen.

“After last year, we were just monitoring, what are we going to do, where can we go?” Mayer said. “It just made all the sense in the world that this would be a choice.”

Bubolz spent 13 years with the Cleveland Cavaliers before coming to Las Vegas in 2016. His final three years involved trying to get the NBA All-Star Game to Cleveland, a bidding process that required things such as having a hotel with 600 rooms close to the venue. The city is finally hosting this year.

Those questions aren’t an issue in Las Vegas. There are more than enough hotel rooms to accommodate everyone. There is also plenty of nearby space for secondary events such as the NHL’s Fan Fair, which started Thursday and ends Sunday at the Las Vegas Convention Center West Hall.

“Normally those are bigger parts of the process,” Bubolz said. “That part of the conversation, we didn’t spend a lot of time (on it). It’s more, ‘We’re thinking Vegas, we’re thinking this time, are you guys ready to go?’ And, of course, we said yes.”

The Knights needed T-Mobile Arena for Tuesday’s game against the Buffalo Sabres, but Mayer and his team arrived late last week to begin preparations.

There are always a huge number of moving parts for an event of this size. Fifty to 60 cameras need to be set up for the NHL’s two national TV partners — ESPN (U.S.) and Sportsnet (Canada). Lights and pyrotechnics need to be brought in. Sound equipment for the musical acts — Zedd during the pregame introductions for the All-Star Game and Machine Gun Kelly during the second intermission — must be tested.

Besides putting everything in place, Mayer and his team need to rehearse, rehearse, rehearse. In parking lots. Outside T-Mobile Arena. Inside the building. Everything needs to be rehearsed so the first time it’s happening doesn’t take place in front of a live audience.

Mayer and his team will even practice the check presentation to the winning team of the All-Star Game. Stand-ins will go through many of the skills events because the NHL schedule went through Wednesday.

“These events don’t just magically at the snap of a finger happen,” Mayer said. “We’ve got the best team in the world at producing events. And we roll with the punches.”

Given the Knights’ reputation for in-arena presentation — they have already projected a giant squid and a flying jet onto the ice this season — anticipation is high.

“Our city is pretty electric,” said Knights captain Mark Stone, who is appearing in his first All-Star Weekend. “Our building is the best in the NHL at atmosphere and production. I’m excited to see what they put together for the All-Star Game. I’m sure our fans will appreciate it.”

Mayer knows he’s competing with star performers on the Strip for entertainment dollars during All-Star Weekend.

There’s also the matter of hosting a sporting event the same week that the East-West Shrine Bowl (Thursday) and the NFL’s Pro Bowl (Sunday) take place at Allegiant Stadium. It’s going to be hard to stand out.

Luckily for him, the surroundings and local team sparked the NHL’s creativity. Mayer said the theme of the event will be “old Vegas to new Vegas” using the Knights as a transition. He is going to take advantage of the location to create experiences worthy of the reputation the team has earned as one of the greatest shows on ice.

“Our event and our game presentation, we tried to make it Vegas five years ago,” Bubolz said. “Make it unique and different. We had a lot of intention about that. The league loves that. They want to bring that to life in the All-Star festivities.”

Panic! at the Disco’s performance led to the creation of the “NHL Fountain Face-Off” for Friday’s skills competition during which eight players will travel by boat to a “rink” at the Bellagio fountains. They will try to shoot pucks into five targets in the least amount of time while water and wind try to throw them off.

The league also created the “NHL 21 in ’22” event in which five players shoot at an oversized deck of cards on Las Vegas Boulevard and try to create a hand of 21 without going bust.

The goal was to create events that could only happen in Las Vegas, would get players excited to participate and would be talked about for years.

“The one thing about Vegas is they’ve never been shy about exposing those unique opportunities and showing what we’re all about,” said Knights coach Pete DeBoer, who will lead the Pacific Division in the All-Star Game. “I think guys will enjoy it. I know guys are looking forward to coming into town.”

Las Vegas hosting NHL All-Star Weekend further cements the ties between the league and the city.

The NHL’s awards show was a fixture in town before the COVID-19 pandemic. The Knights’ 2017 expansion draft took place at T-Mobile Arena. The team took part in an outdoor game in Stateline at Lake Tahoe last season.

It’s fair to wonder what’s next. Foley said he hopes the event will lead to another outdoor game or a draft.

Mayer said Las Vegas would be a great place for a draft, but a location for an outdoor game would have to be worked out. Plus, he added, the NHL wants to “share some of that love around the league.”

Still, there’s no question All-Star Weekend has a chance to further what has been a surprising yet undeniably effective partnership between the league and Las Vegas. Hockey in the desert. Turns out it works.

“We’re extremely fortunate in only our fifth season to have the opportunity,” Bubolz said. “It’s a great, tremendous showcase not only of the best players in the world in our game, but it’s a tremendous showcase of the city of Las Vegas and the surrounding valley.”