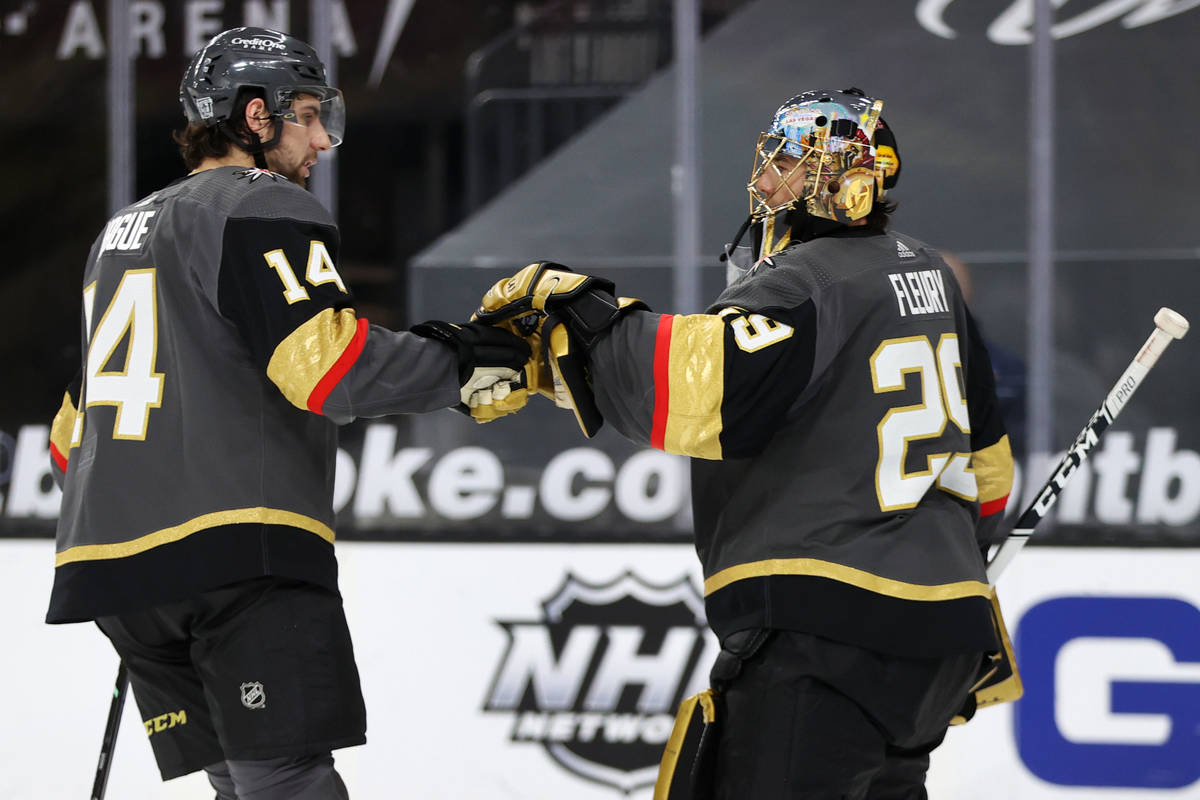 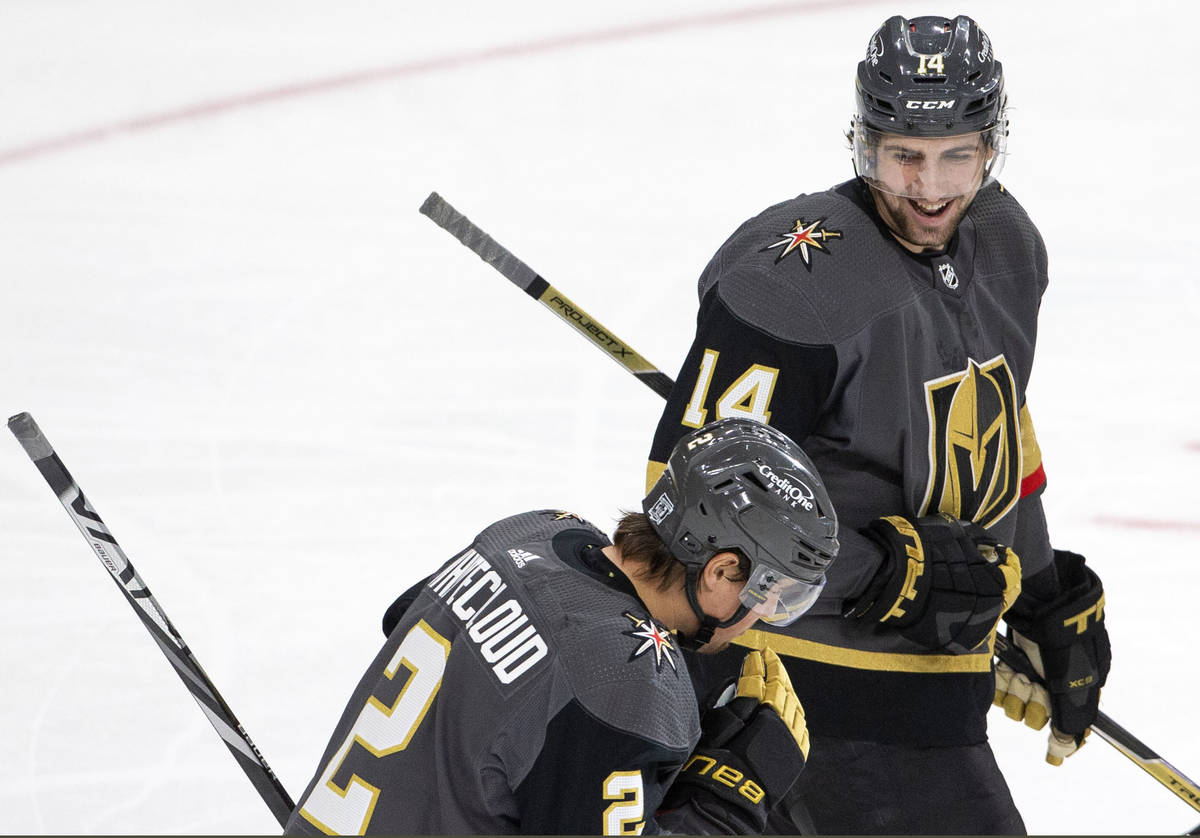 In this Jan. 18, 2021 file photo,Golden Knights' defenseman Nicolas Hague (14) celebrates with defenseman Zach Whitecloud (2) after their team scored a goal against the Arizona Coyotes during the third period of their NHL hockey game at T-Mobile Arena in Las Vegas. (Ellen Schmidt/Las Vegas Review-Journal) @ellenschmidttt 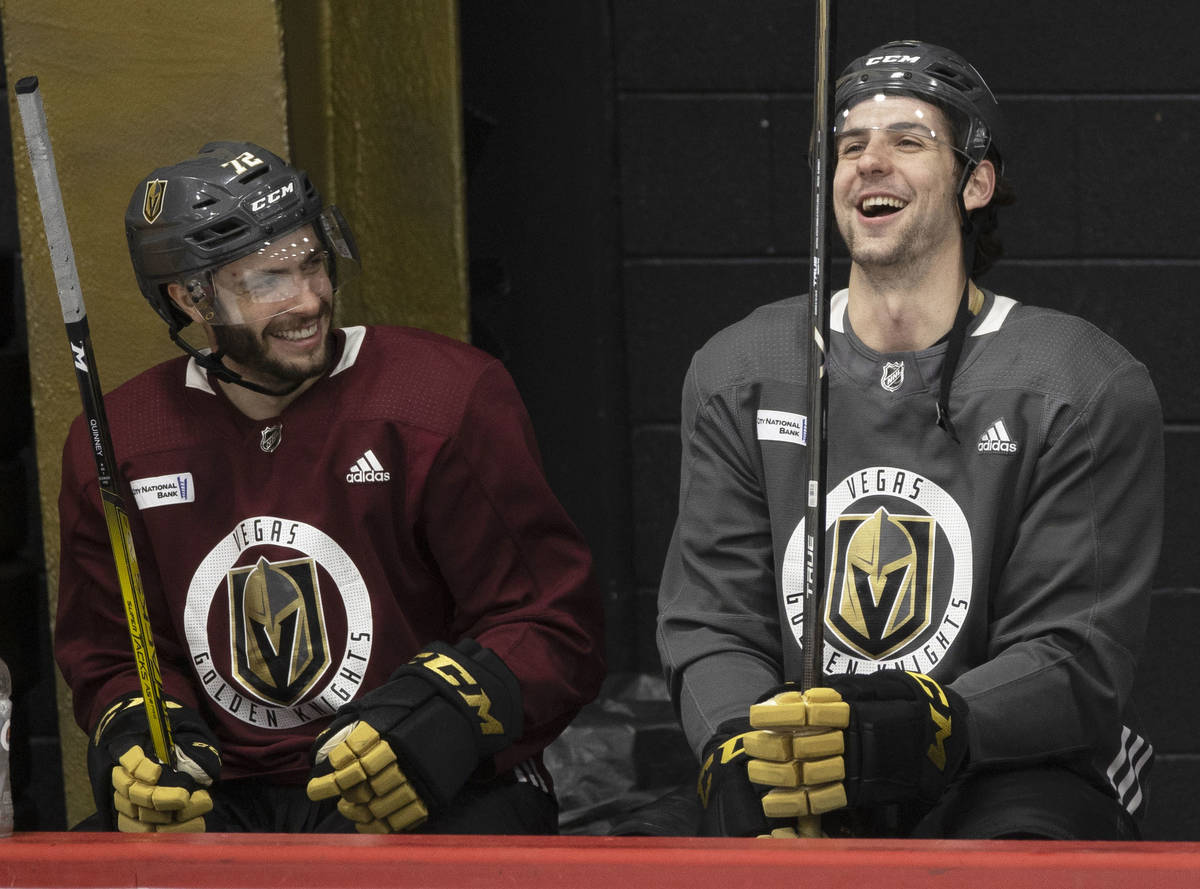 Nic Hague is 6 feet 6 inches tall and still growing. At least in a hockey sense.

The Golden Knights defenseman appears to be skating a little taller on the ice as a sophomore. He’s been aggressive. He’s been decisive.

And it’s getting results. He has four points in five games after recording the first three-point night of his career in Friday’s 5-2 win over the Los Angeles Kings at T-Mobile Arena.

It took him 20 games to reach four points as a rookie. Hague doesn’t think offense has been the biggest difference in his game, however. It’s his defense that’s fueling his rise, he said.

“It’s about getting (more confident) with defending,” Hague said. “I don’t ever feel intimidated or in awe, I’ll say, with other teams’ top lines. I feel I can defend a lot better this year, which has been something I’d tried to work on and an area of my game I thought needed improvement after last year.”

Hague knows it’s a cliche, but every coach he’s played for has told him good defense leads to offense. His start shows he’s taken that maxim to heart.

The 22-year-old has always had the ability to be a good defender. He’s the tallest player on the Knights’ roster by 2 inches and one of the largest in the NHL. Only four skaters in the league are listed taller than 6-6.

That size gives Hague reach and length his teammates can only dream of.

“He’s got a fishing rod for a stick there,” defensive partner Zach Whitecloud said. “For him to have that and have good feet and a good mind, the way he defends is quick and hard, and he’s physical and he’s big. That’s scary for a lot of forwards.”

Hague is putting those tools to good use this season. He’s using his size to close down shooters and take away passing lanes in the defensive zone. He’s also using it to win puck battles in the corners.

That stout defensive effort is leading to chances the other way. His three assists have come in transition when he’s moved the puck to his forwards with speed.

“That’s what we’re trying to do,” Hague said. “Get involved and move pucks quickly.”

That level of strong two-way play was why Hague was always a touted prospect after being selected 34th overall in the 2017 draft. He got his feet wet in the NHL last season by playing 38 games, but didn’t appear after the All-Star break.

Coach Pete DeBoer said that wasn’t an indictment on Hague. Whitecloud was called up one game after the Knights reconvened and played too well to be taken out of the lineup.

“I felt he (Hague) was a good player last year, but he was a victim of a little bit of circumstance,” DeBoer said. “We talked all offseason about our confidence in him and his ability to come in and play this year.”