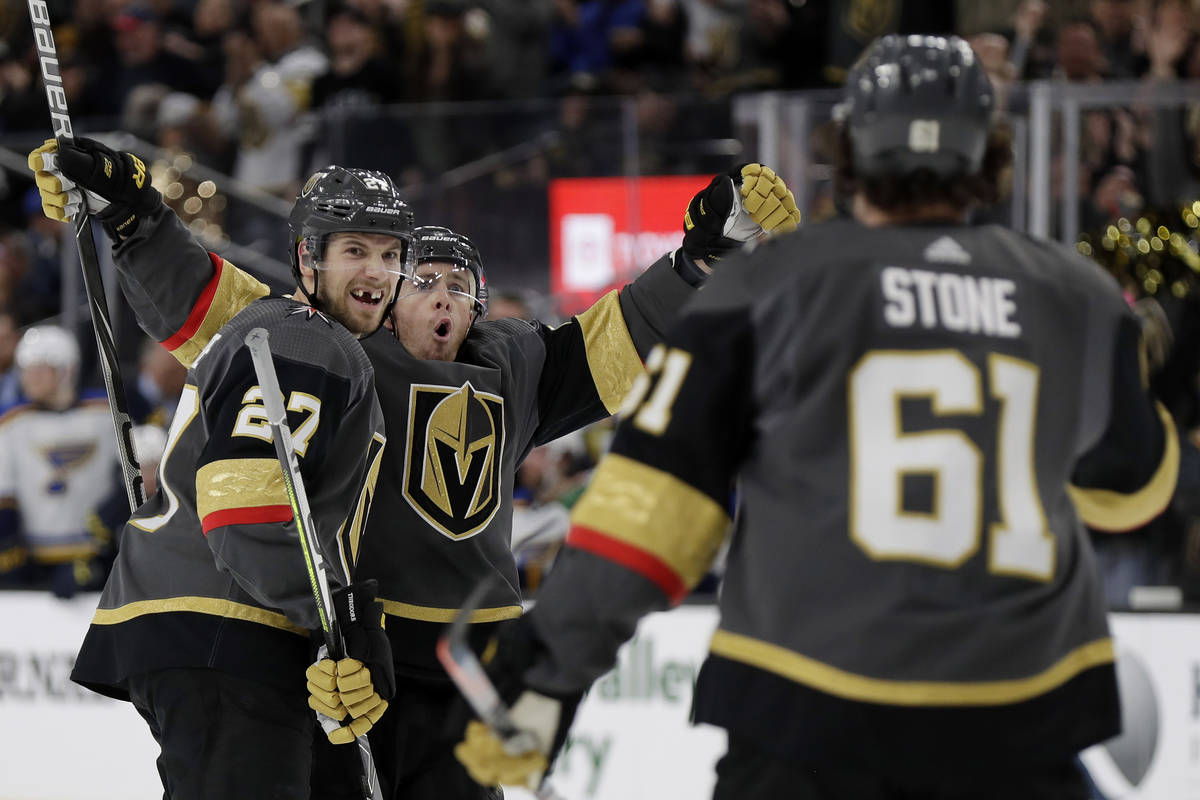 The plan for an expanded 24-team postseason that was approved by the NHL Players’ Association executive committee Friday means the end of the 2019-20 regular season.

Any way you look at the standings, whether it’s points or points percentage, the Golden Knights unofficially are the Pacific Division champions.

Twice in the last three years.

The NHL has more pressing matters now that the framework for a return to play is in place, not the least of which is establishing coronavirus testing procedures and health protocols.

An announcement could come early next week, but before that can happen, here are some of the other details the NHL still must sort through:

1. What format will be used for the 24-team tournament?

According to a report from TSN, the NHL is trying to decide whether it will go with a traditional bracket or reseed the playoffs.

Why does this matter? Let’s say No. 12 seed Chicago takes out fifth-seeded Edmonton during the best-of-five play-in round.

In a bracket format, the Blackhawks would advance to play the fourth seed, while the top seed draws the winner of the No. 8-9 matchup between Calgary and Winnipeg. That doesn’t seem fair.

If the league reseeds after the play-in round, the top seed (likely St. Louis) would be rewarded by facing the lowest remaining seed in the field, which would be the Blackhawks, a team that was a seller at the trade deadline.

The NHL also reportedly has to work out whether the conference quarterfinals will feature best-of-five or best-of-seven series.

2. How will the round robin affect seeding?

The top four teams from each conference will receive a bye to the quarterfinals. That much is clear.

The Knights will start as the No. 3 seed in the Western Conference behind St. Louis and Colorado, but the NHL must establish how all this is going to work.

And what would it take for the Knights to jump from the third seed to No. 1, or is that not possible?

3. When will the NHL resume playing?

The league has yet to announce when Phase Two of its restart plan, which would unlock team practice facilities and allow for small, group skates, begins. That’s the first step.

In the meantime, there’s issues to sort through with the U.S.-Canadian border, which is closed to nonessential travel through June 21.

But a best-case scenario could see training camps in July with the first set of games two to three weeks after that if everything with the coronavirus continues to trend in a positive direction.

4. Where will all this take place?

The NHL is in no rush to announce its hub sites, as it closely monitors the pandemic and spread of the coronavirus.

The NBA released a statement Saturday confirming discussions to use Disney’s ESPN Wide World of Sports Complex in Orlando, Florida, as the location for its restart in late July. That seemingly clears the way for Las Vegas to be used as one of the NHL’s hubs.

Columbus (Ohio), Edmonton (Alberta), Dallas, Nashville, St. Paul (Minnesota), Toronto, Vancouver (British Columbia) are all reportedly in the mix, as the league continues to weigh whether it needs two hubs or four.

5. What’s happening with the draft?

There was a push from the league office to hold a virtual draft in June, but that lost steam.

Now it appears the event, which was originally scheduled for June 26 and 27 in Montreal, will take place after the season is completed.

The seven teams that are not included in the 24-team postseason format will participate in some form of lottery to determine the No. 1 pick, which is expected to be used on Canadian winger Alexis Lafreniere.

The league must determine the rules for the lottery, and it remains to be seen how the outcome of the 24-team tournament will affect the selection order. 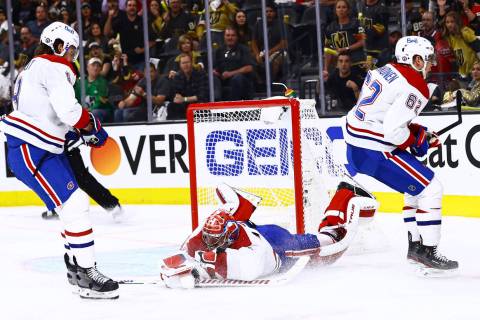 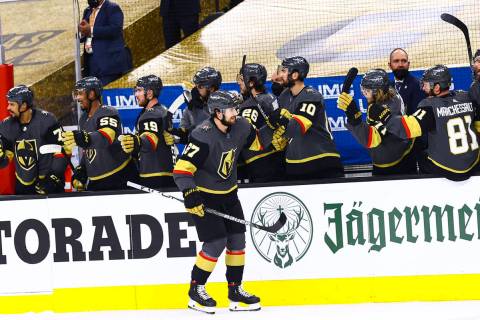 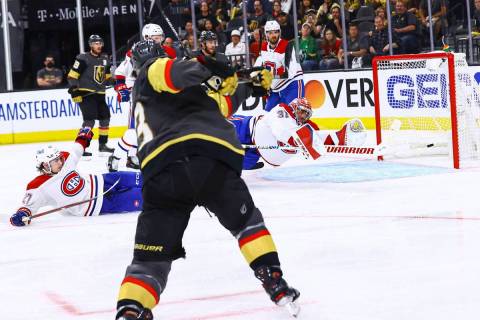 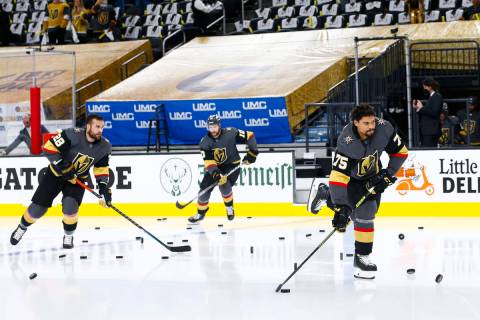 Here are the players the Golden Knights and Montreal Canadiens are going with for Game 1 of their NHL semifinal. 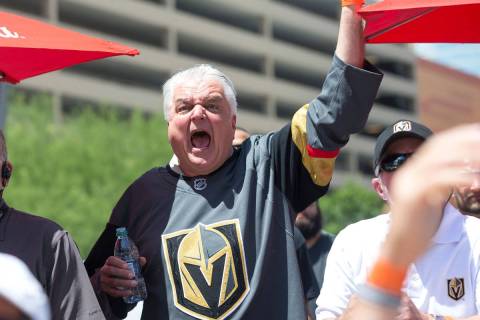 Spirits on the line between Nevada governor, Quebec premier
By Mark Anderson / RJ

Nevada Gov. Steve Sisolak and Quebec Premier Francois Legault have placed a wager on the outcome of the Golden Knights-Montreal Canadiens series. 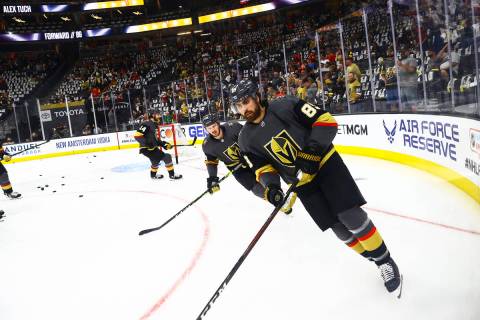 Alex Tuch had a big hit in the Golden Knights’ series-clinching victory over Colorado and expects to play a heavy game against Montreal in the Stanley Cup semifinals. 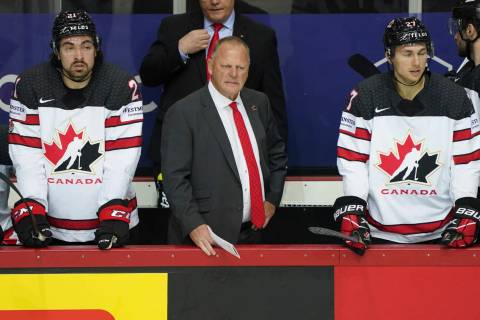 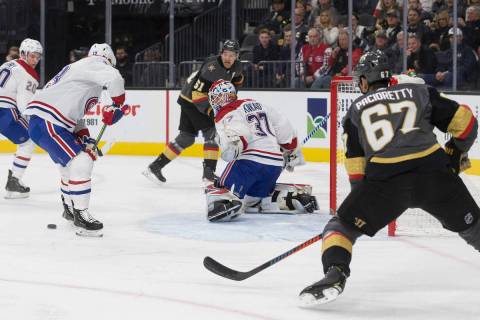 The Golden Knights open up the Stanley Cup semifinals on Monday against the Montreal Canadiens at T-Mobile Arena. 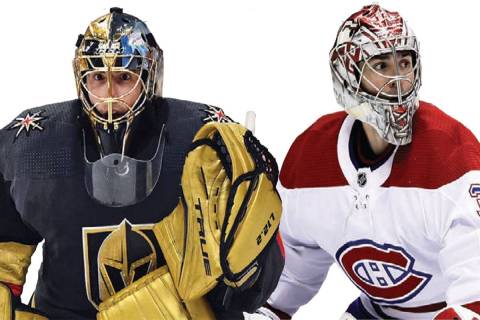 Marc-Andre Fleury vs. Carey Price: Who has the edge?
RJ

The matchup between the Golden Knights and the Canadiens will be a faceoff between two premier goalies of the last decade, as Marc-Andre Fleury and Carey Price compete with a shot at the Stanley Cup at stake.