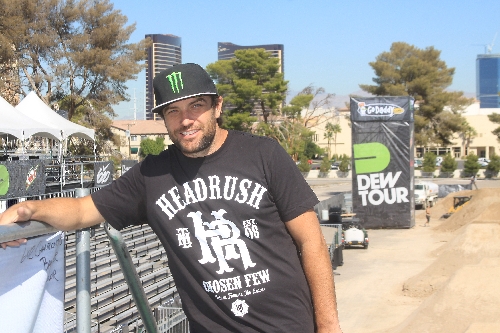 A year ago today, T.J. Lavin went to UMC to visit his friend Ty Pinney, who was in a medically induced coma after suffering a serious brain injury in a bike crash on the BMX course behind Lavin’s Las Vegas home.

Less than 24 hours later, Lavin was in a hospital bed next to Pinney, in the same condition, after crashing his bike at the Dew Tour Championships at the Hard Rock Hotel.

"The last thing I remember (before the crash) was seeing him in the hospital," Lavin, 34, said. "It’s pretty crazy."

When the former X Games champion emerged from his coma two weeks later — squeezing his girlfriend’s hand and hearing his mother tell him he wasn’t paralyzed — he assumed it was still the day of the crash.

After a trying year of recovery from a broken wrist, broken eye socket and serious head injury that caused major swelling and bleeding on his brain, Lavin still isn’t back to 100 percent.

"I’m probably 80 percent back to normal," he said. "I still can’t do anything exciting. I can’t ride or do anything action-wise. I just bought a trampoline to try to get my equilibrium back.

"My balance and equilibrium and agility are still pretty off. But everything else is going really well."

Early in his recovery, which included a month in the hospital, a month in a rehabilitation facility and three months of physical therapy that he continues to do, Lavin was unable to walk, could barely see or talk, and struggled to complete simple cognitive tasks.

"I didn’t know what animals were or how to count money. A lot of things, like feeding myself, it was just crazy how hard it was," he said. "For a while there, every day was like ‘Groundhog Day’ for me. I had no idea what was going on.

"I can’t really remember too much of this whole entire year. It just went by in the blink of an eye."

Lavin, who in February was able to resume his role as host of MTV’s "Real World/Road Rules Challenge," said he still struggles with short-term memory loss. But he hasn’t forgotten how much his priorities changed after the crash.

"The smallest things really meant a lot to me at that time," he said. "Friends and family matter the most and things are just things. When you die, you can’t take nothing with you.

"You’re remembered for how you act and who you are way more than for what kind of car you drive."

While Lavin has heeded the advice of doctors who told him to refrain from riding bikes for 12 to 18 months, he remains passionate about his sport and relishes his role as the Dew Tour’s dirt course designer.

"I love this stuff," Lavin said while standing on the course he built for this week’s event at the Hard Rock. "It’s crazy because people wonder what the heck you’re doing building jumps, but this is my passion.

"Everything else is cool, but I love building jumps. I love riding them more, but since I can’t ride them, this is the second-best thing."

Lavin, who turns 35 in December, said he hopes to ride again soon, but won’t return to competitive racing.

"I’ll never compete again, I don’t think. Those days are over for me," he said. "But shooting videos and ads, I could see myself riding again.

"As soon as I feel at one with my bike again, I’ll ride it and see how it feels, but I’m not feeling it yet."