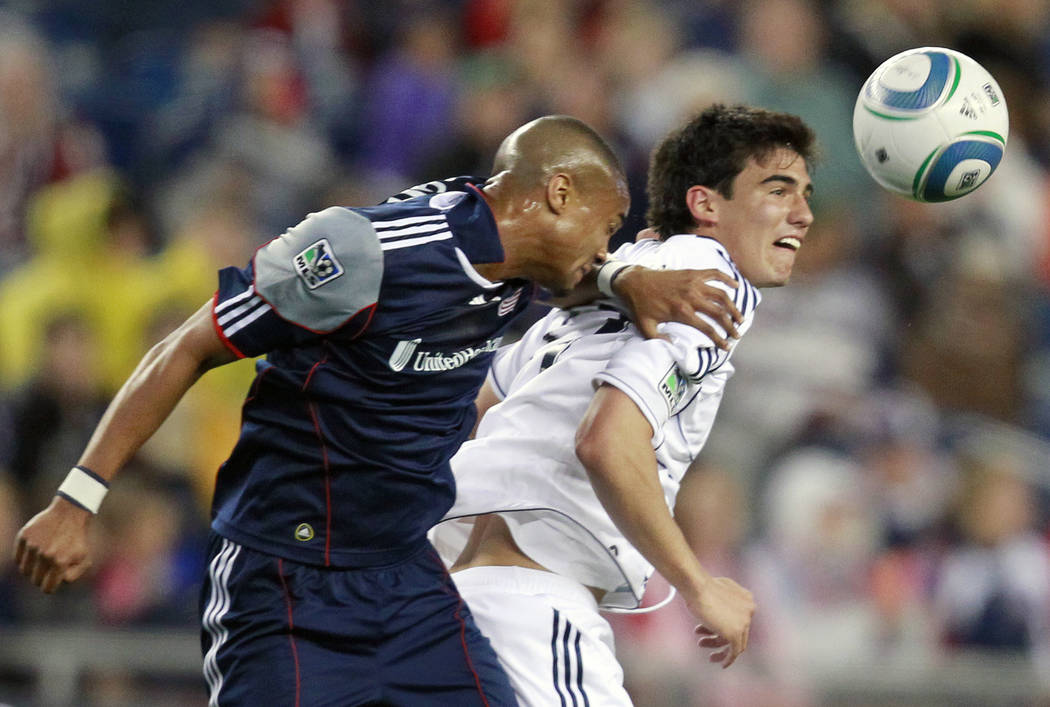 New England Revolutions' Darrius Barnes, left, and Vancouver Whitecaps' Omar Salgado try to get a head on the ball in the first half of an MLS soccer game, Saturday, May 14, 2011, in Foxborough, Mass. The Revolution won 1-0. (AP Photo/Michael Dwyer)

Omar Salgado’s first goal with the Lights FC was a thing of beauty.

The 24-year-old forward sent a free kick 27 yards into the net in the 74th minute for the game-winning goal in the Lights’ 2-1 win at Portland Timbers 2 on Sunday. The left-footed finish displayed the skill the No. 1 overall pick in the 2011 Major League Soccer SuperDraft carries, enough to tip the scales of a close game.

“It feels awesome. I’m really happy about the three points, happy for the team; hopefully we can keep getting more wins,” Salgado said. “It felt great to get that first goal, and hopefully I get rolling now.”

Salgado’s strike carried the Lights (6-8-5) to their first road win since their season opener at Fresno FC on March 17, ending an 0-6-2 stretch. The loanee from El Paso USL made his second appearance as a substitute in the 61st minute and was given free-kick duties after midfielder Raul Mendiola was fouled in the middle of the field.

From there, Salgado lined up his shot and bent it through the Timbers 2 (9-9-2) wall and past diving goalkeeper Kendall McIntosh. It was his first professional goal since May 5, 2014, according to the website Soccerway, which tracks statistics worldwide.

“The strategy was going to be just to put it into the wall,” Salgado said. “We decided pretty much to just bang it in. I knew they were going to move; I knew that was the perfect spot to put it in. I was just glad it went in.”

The Lights then closed out a game in which they had possession only 33.4 percent of the time and allowed six corner kicks while taking one. They’ve only held the ball less in one game this year: a 0-0 draw at Real Monarchs SLC on April 30, when defender Marcelo Alatorre was given a red card in the 18th minute.

The Lights were still the first to score, with forward Samuel Ochoa getting his fifth goal of the season in the 53rd minute. Midfielder Carlos Alvarez hit the crossbar with a shot from the top of the box, and Ochoa corralled the rebound before kicking it into the top corner.

The Timbers 2 answered 10 minutes later, with Jack Barmby tipping in a crossing pass. But that was all the home team could muster on a hot and humid day in Portland as the Lights ended a two-game losing streak.

“Tactically, game plan vs. game plan, this game was very close,” coach Isidro Sanchez said. “It was about winning the individual challenges and the effort.”