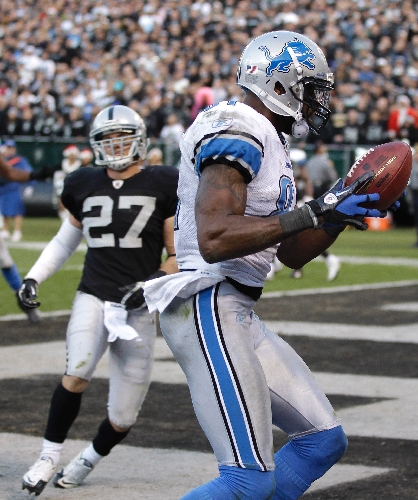 ■ RECAP: Lions defensive tackle Ndamukong Suh reached out his right arm to block a winning field-goal attempt, hurled his helmet about 20 yards and let out a loud scream in celebration.

Suh provided the perfect exclamation point in his return from a two-game suspension, sealing a thrilling comeback by Matthew Stafford and the Detroit Lions, who rallied to beat the Oakland Raiders 28-27 Sunday.

Stafford threw a 6-yard touchdown to Calvin Johnson with 39 seconds left to cap a 98-yard drive that helped the Lions (9-5) take a two-game lead in the NFC wild-card race.

The Raiders (7-7) appeared in control when Aaron Curry returned a Stafford fumble 6 yards for a TD to make it 27-14 with 7:47 remaining.

But Stafford engineered two long scoring drives. He completed 29 of 52 passes for 391 yards and four touchdowns, two by Johnson, who made nine catches for 214 yards.

Stafford and Johnson connected for 21 and 48 yards on the winning drive, which started at the Detroit 2 with 2:14 to play and the Lions out of timeouts.

Carson Palmer got the Raiders to the Detroit 47 with four seconds left, but Suh got his right thumb on Sebastian Janikowski’s 65-yard field-goal attempt.

■ QUOTEABLE: “I’m just proud of our team. We stuck together. … Guys rallied around each other, and we went down and put the dagger in there.”