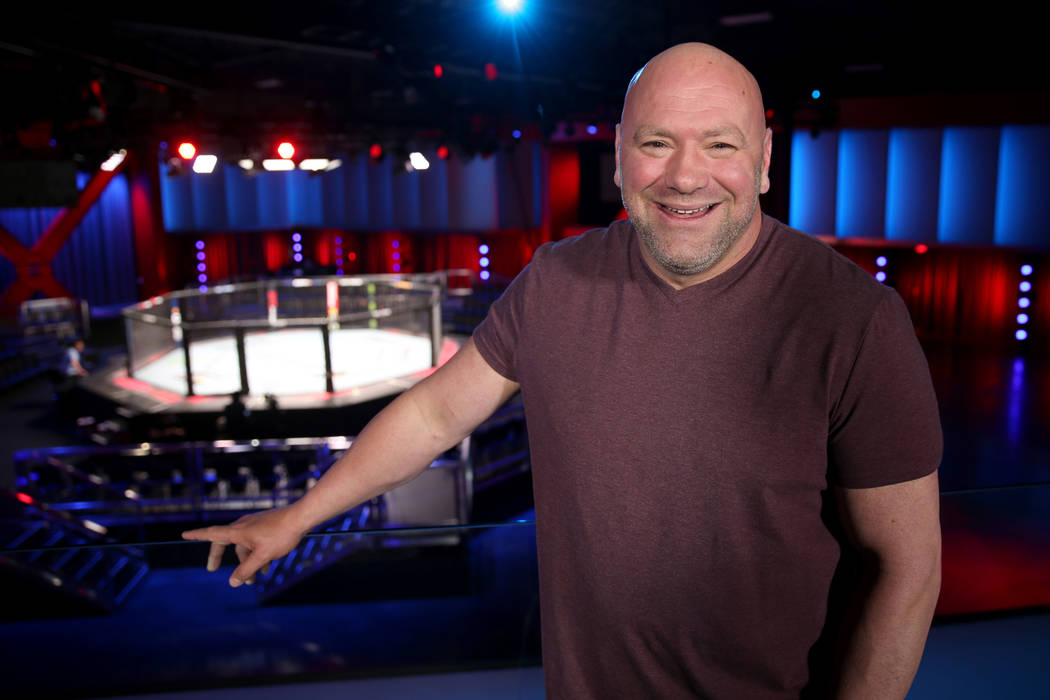 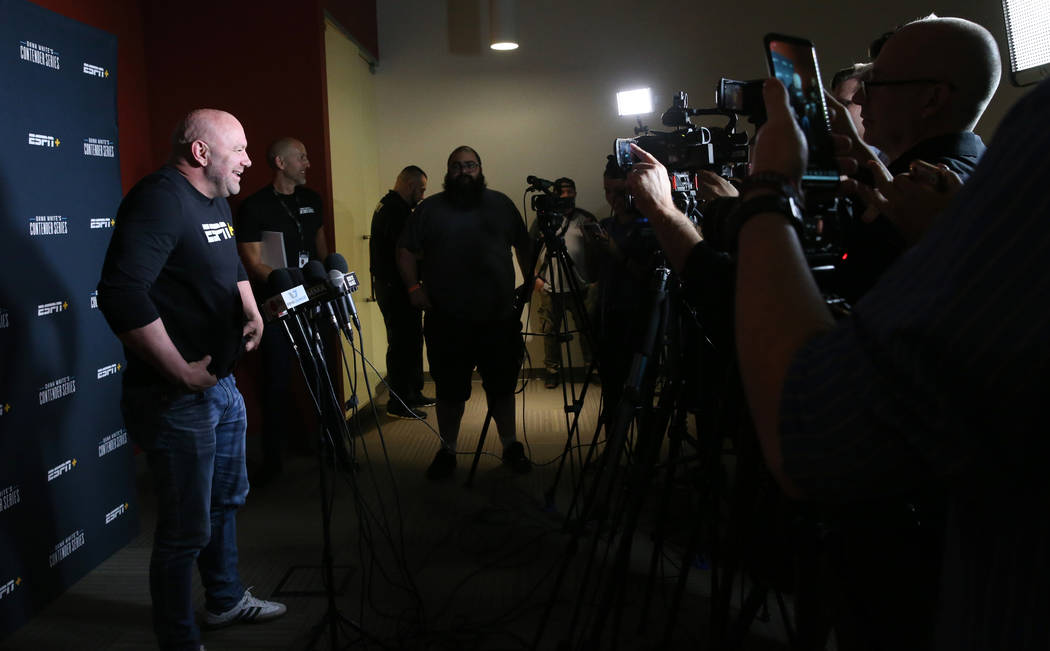 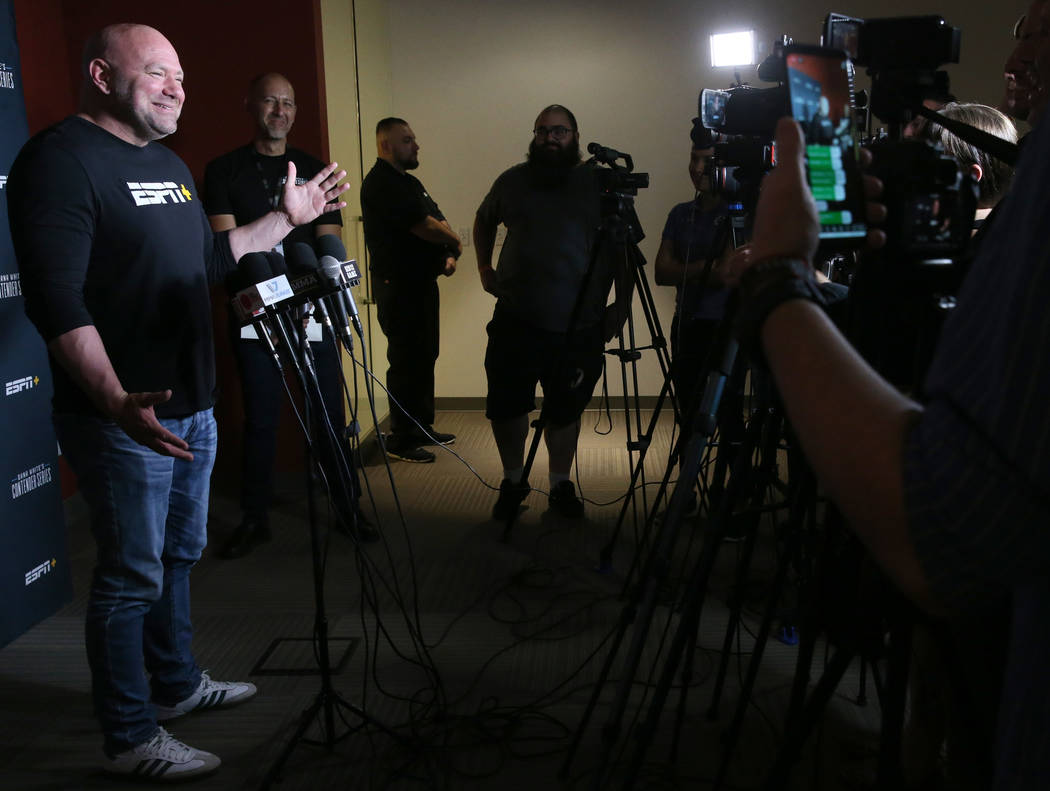 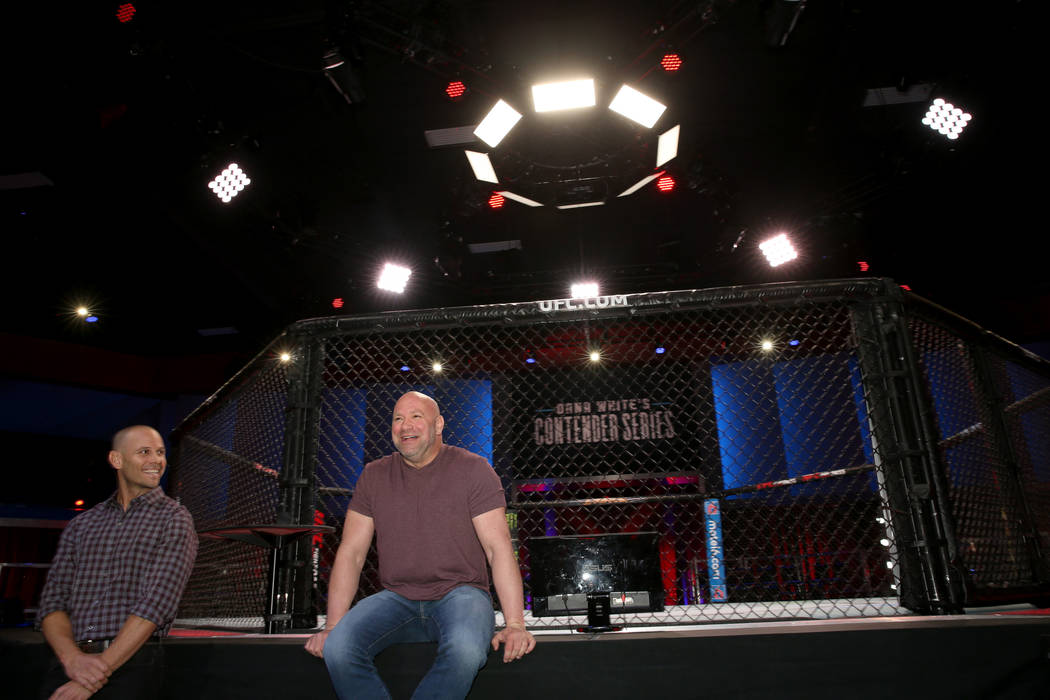 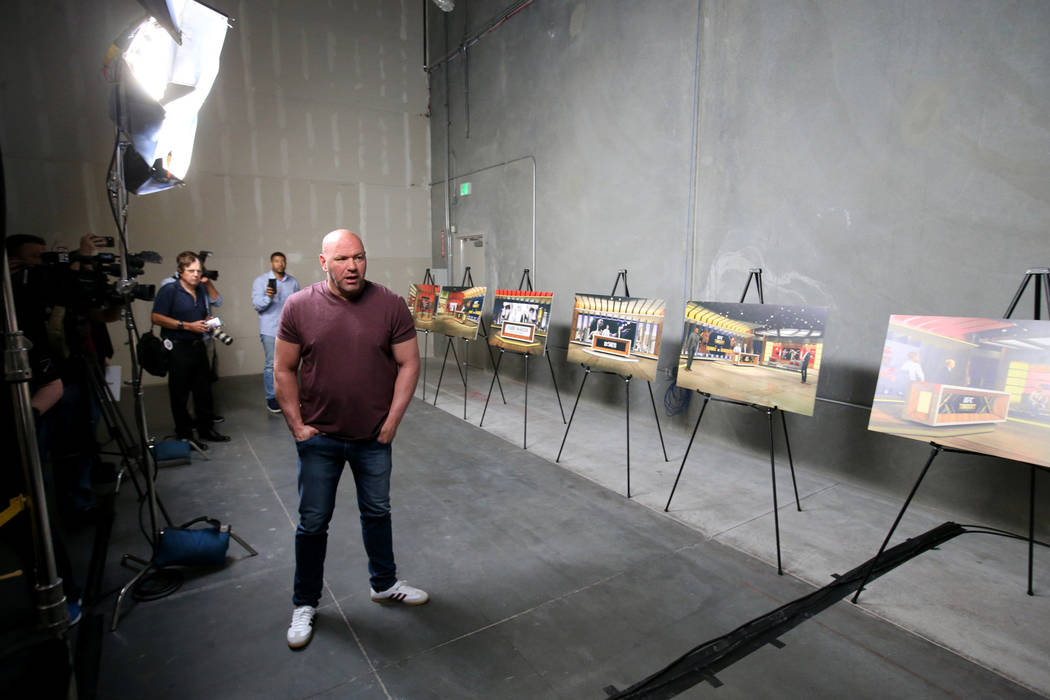 UFC president Dana White has guided the world’s largest MMA organization from a one-room operation that was acquired for $2 million in 2001 to a global juggernaut that sold for more than $4 billion in 2016.

The 49-year-old Las Vegan recently signed a seven-year contract extension to remain in his current role in a year that has seen the UFC begin its lucrative TV deal with ESPN and open a new production center complete with a 1,500-seat arena to put on live events across the street from its global headquarters.

White sat down with the Review-Journal on Monday after a tour of the new UFC Apex facility to address a variety of topics.

Q: Do you get sentimental about things like this?

White: I think you saw my sentimental side when we sold. I was pretty messed up for a while after that. It took me a couple of months to get back on track. But now I love it here. I love what we do here. I love the vision here right now. The great thing about Ari (Emanuel, of UFC owner William Morris Endeavor) is if we need money to do something, he’ll come up with it. I’ve got a lot of ideas, so this is going to be fun.

Q: You just signed a new extension with WME to run the UFC for another seven years. What continues to drive you?

White: It’s all about the vision. I have plans. I have ideas for the sport and for the brand. Being able to implement them at any level is fun. No matter what I want to try or get into, they’re 100 percent behind. Before, my motivation in building this was just working with my best friends, and we were having a blast. Every day was fun. Lorenzo (former owner Fertitta) used to say, ‘Even the bad days are pretty good around here.’ Then when that all went away, my motivation is to be focused on building this thing as big as I always dreamed it could be. Ari is down with that and ready to roll.

Q: Do you have to continually change the vision?

White: When you have a concept and a sport like this, you have to have a vision. A lot of different people have different opinions of me, but I’ve been the vision since the day I said to the Fertittas, ‘You should buy this thing.’ I’m not saying they didn’t have part of the vision, but I’m the vision guy when it comes to the UFC and the fight game.

The vision never changed. Since day one, you’ve always heard me say, ‘This will be global, and this will work anywhere.’ … Now with streaming, with ESPN Plus and UFC Fight Pass, we can do fights all over the world.

Q: That includes putting on some non-MMA fights. You talk often about getting into boxing, and there are rumors of WME buying Premier Boxing Champions.

White: I’d say the rumors you’re hearing are not true. What is true is we’re talking to everybody and looking at everything. We’re considering everything. There could be a situation where we do fights like we do on Fight Pass from other promotions but doing that with boxing, too, maybe acquiring other companies, maybe bidding on the right big fights to air on Fight Pass. We’re looking at all the options, not just one or two. What you’re hearing right now, though, is (nonsense) as usual.

White: Whether boxing is fixable or not remains to be seen. I’m going to give it a shot. But I’ll tell you this, there’s four big heavyweights out there that people want to see, and if sold and done the right way could be even bigger. They’re not as big as they should be. They should be much bigger. The gates should be bigger. The pay-per-views should be bigger. I believe I could add value to those fights. Some people might agree; some won’t. So we’ll see how this whole thing plays out.

Q: What about the NFL? You’ve talked about it for a long time, but it seems more serious now.

White: It’s not about me being serious about it. It’s about the Fertitta brothers being serious about it. I’ve said many times I would get back in business with a coffee shop with these guys. I would do anything with them. I think they feel the same way about me. We’ve always talked about if this ever happened that we would do it together. But make no mistake: It won’t divert any attention away from what I’m doing. I would just be partners with these guys. The Fertittas are the football guys. They would run this thing.

Q: You don’t want to be like general manager or call plays or anything?

White: I’m all-in on fighting. Any opportunity I could have to be back in business with the Fertitta brothers, I would be in in a minute. And we are invested in a lot of different things together. But I would have to say if they do a football team, I’m in.

Q: What about doing business with Conor McGregor again soon?

White: Conor and I are in a really good place. When he’s ready to come back, we’re ready to have him.

Q: Do you have any indication of when that might be?

White: I don’t. We talked a couple of days ago about things, but it wasn’t fighting. Our relationship is good. It’s always been good. The Cowboy (Donald Cerrone) fight just happened with Tony (Ferguson). (Expletive) great fight. Tony looked incredible. Now Khabib (Nurmagomedov) is fighting (Dustin) Poirier, and we’ll see how this thing plays out and where Conor fits in. He’s one of these guys where he’s been so successful and made so much money and now his whiskey company is killing it. It’s actually good whiskey, and I don’t even like whiskey. That’s not a plug, that’s the truth. He’s making a ton of money with that. He’s in a position to either never fight again or sit back and call his shots and do whatever he wants to do.

Q: Has the ESPN deal changed anything about what you do?

White: You always think as an organization, obviously if you’re in sports, you want to be with ESPN. ESPN is it. But you don’t really realize how good ESPN is and how big their platform really is until you’re in it. I’ve said this a lot over the past couple of weeks, we’ve been in business with these guys for six months now and our business has gone (through the roof). It’s insane. It’s unbelievable, and it’s incredible how good they really are. You have to be in it like I’m in it to really understand. This has been bigger and better than I even imagined.

Q: But Twitter says the UFC has plateaued and is in trouble?

White: Nonstop for 20 years. Including the sale. ‘They overpaid. These guys are dead. Nobody wants to put them on television now. They’re not going to get a deal.’ The list goes on and on. The amount of negativity I hear on a daily basis is unbelievable. But that’s the kind of stuff you have to tune out, focus, stick with your vision and keep plugging every day.

You’ve heard me say this a million times, and I’ll tell you again: ‘Wait till you see what we do in the next two years.’