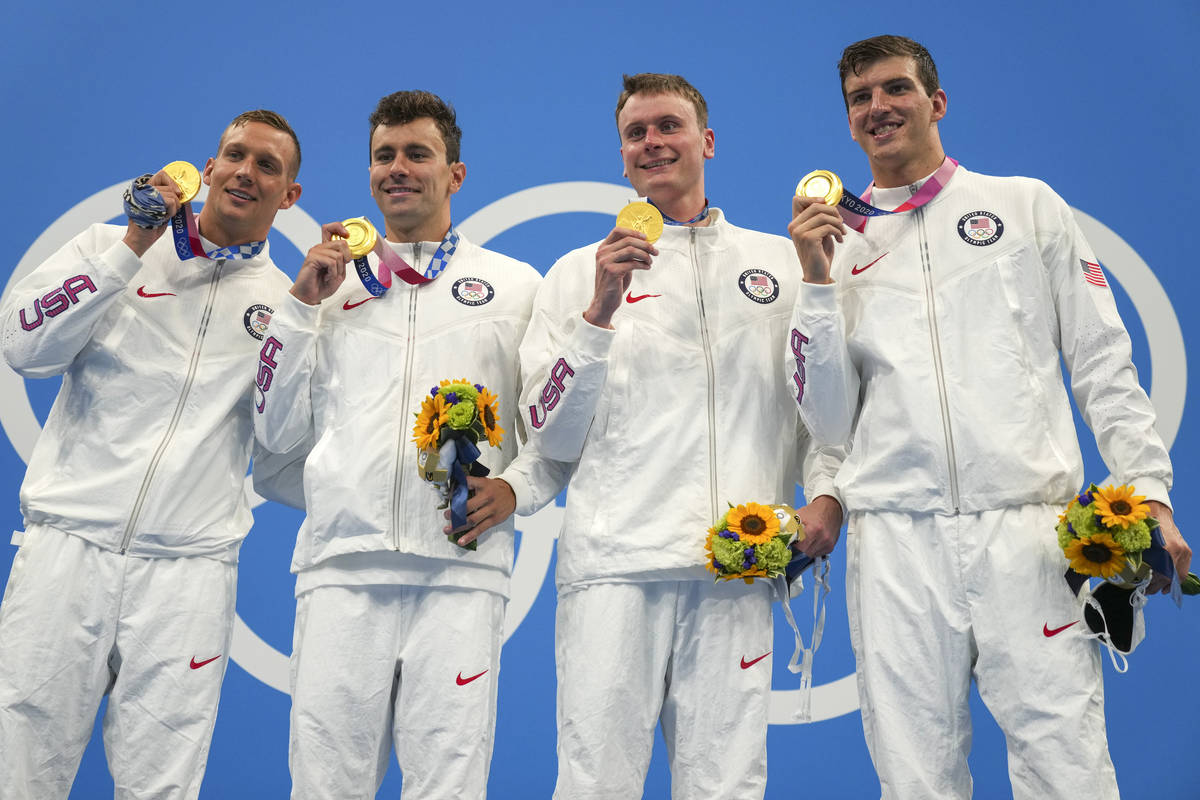 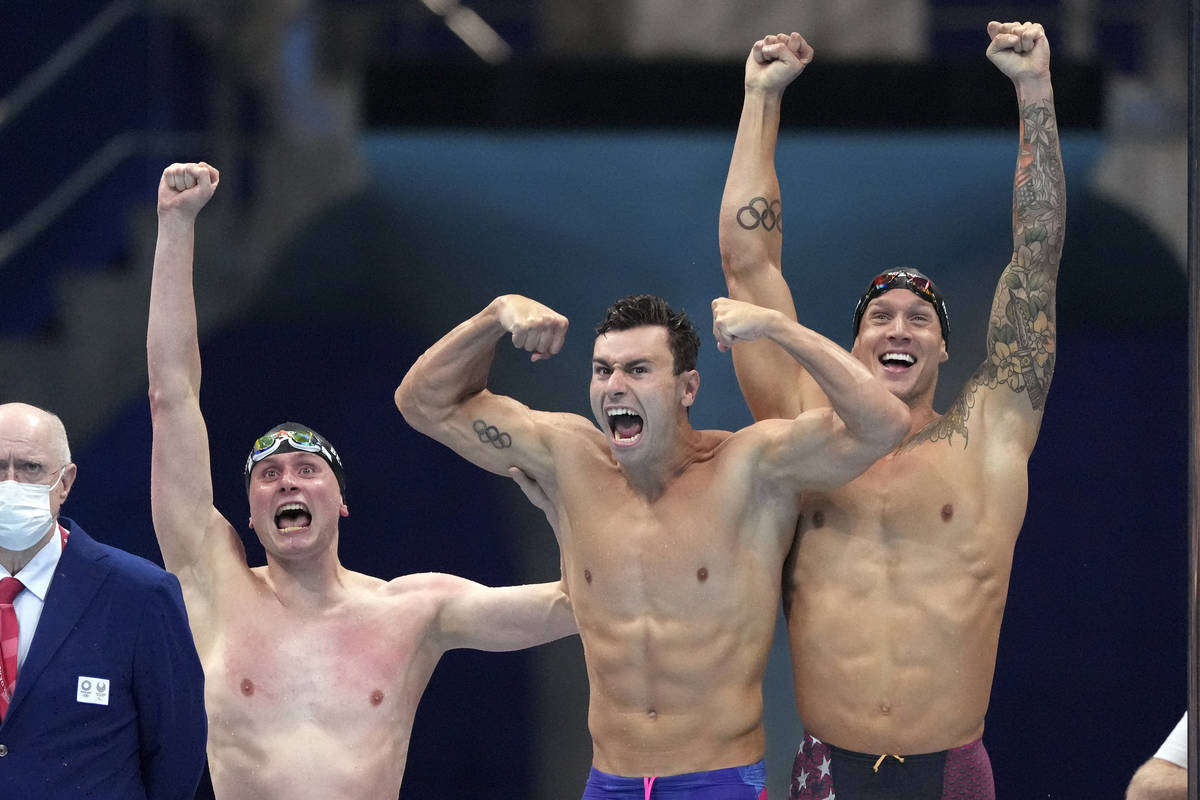 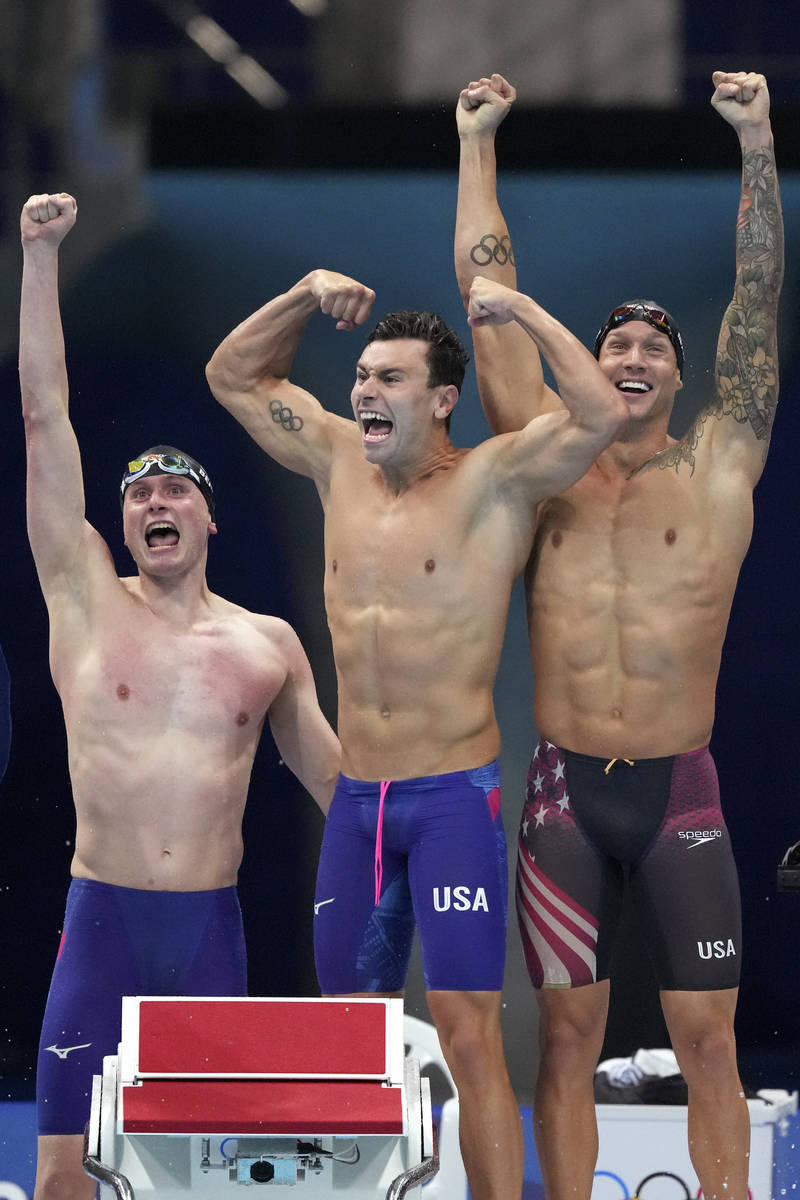 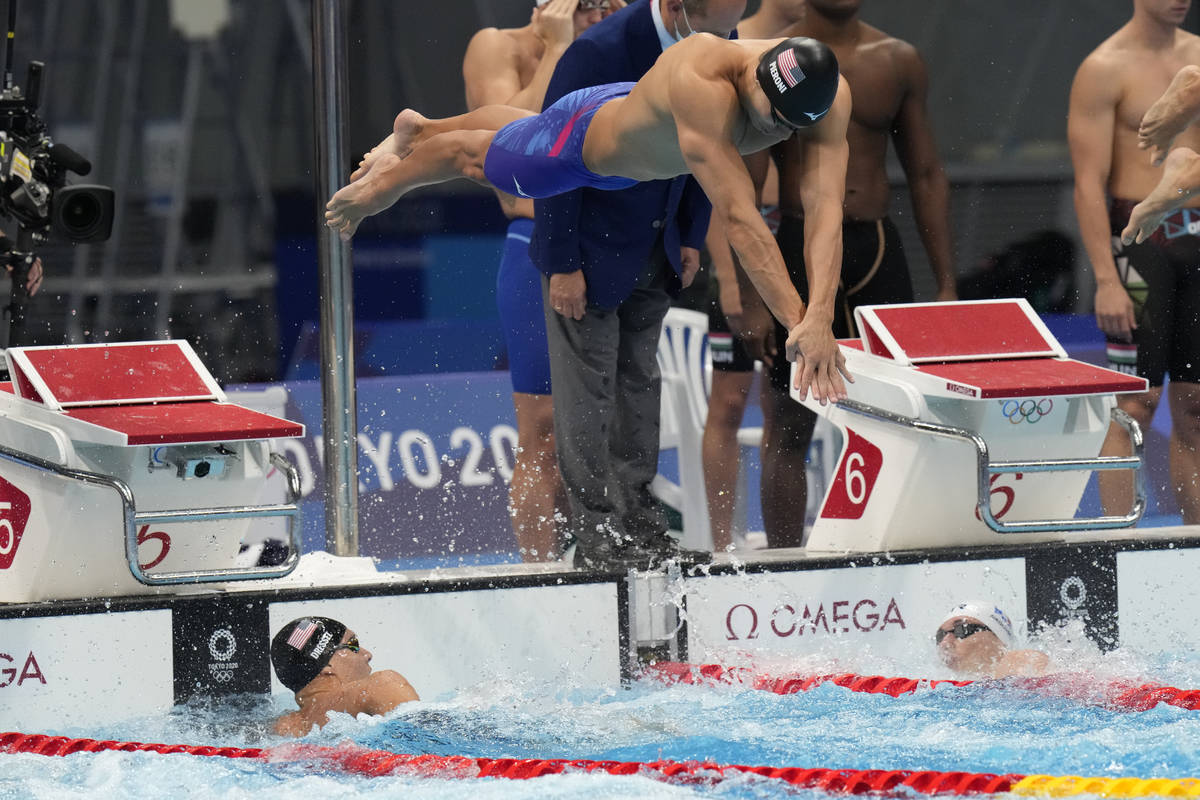 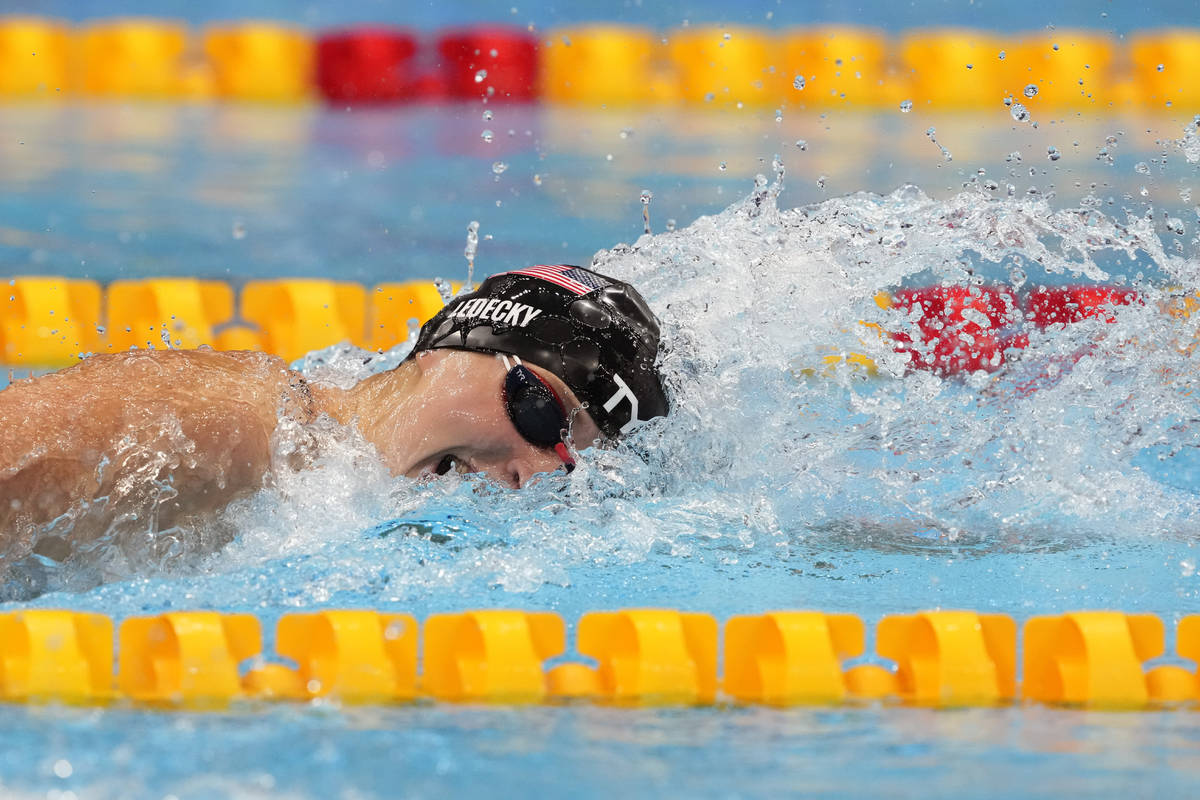 Katie Ledecky, of the United States, swims in the final of the women's 400-meters freestyle at the 2020 Summer Olympics, Monday, July 26, 2021, in Tokyo, Japan. (AP Photo/Petr David Josek) 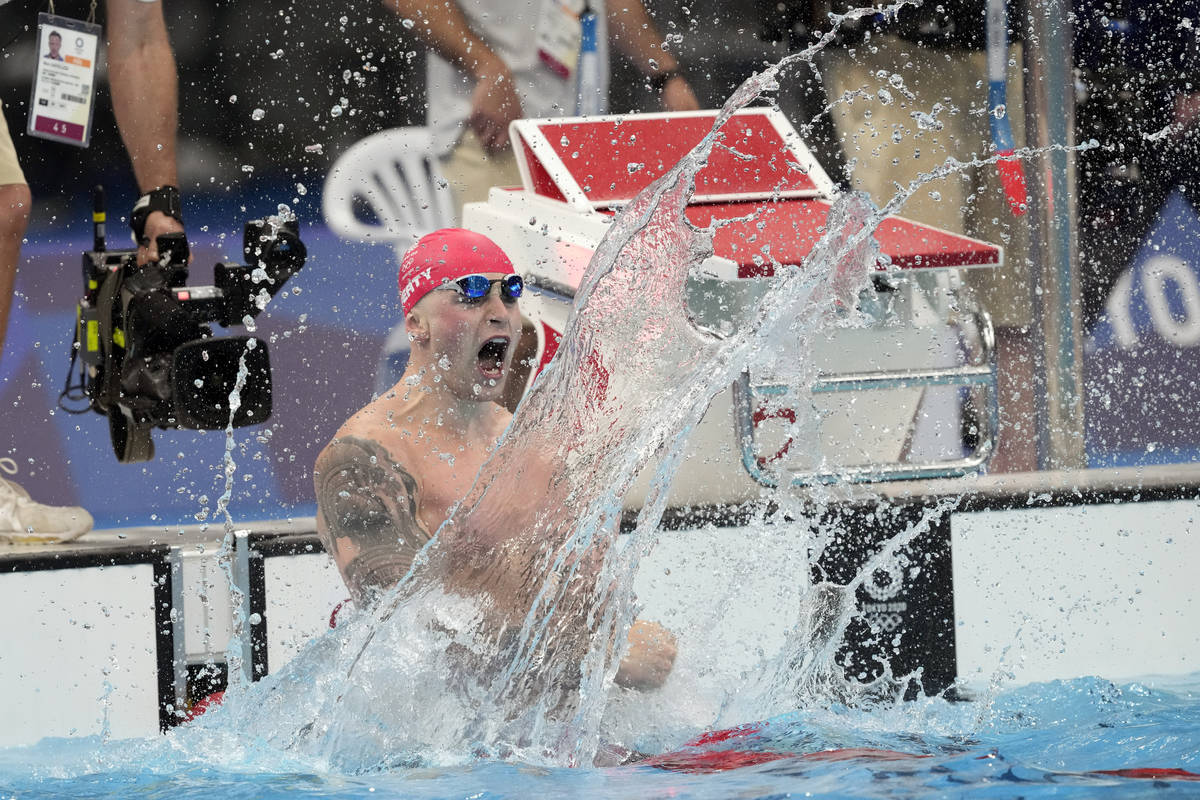 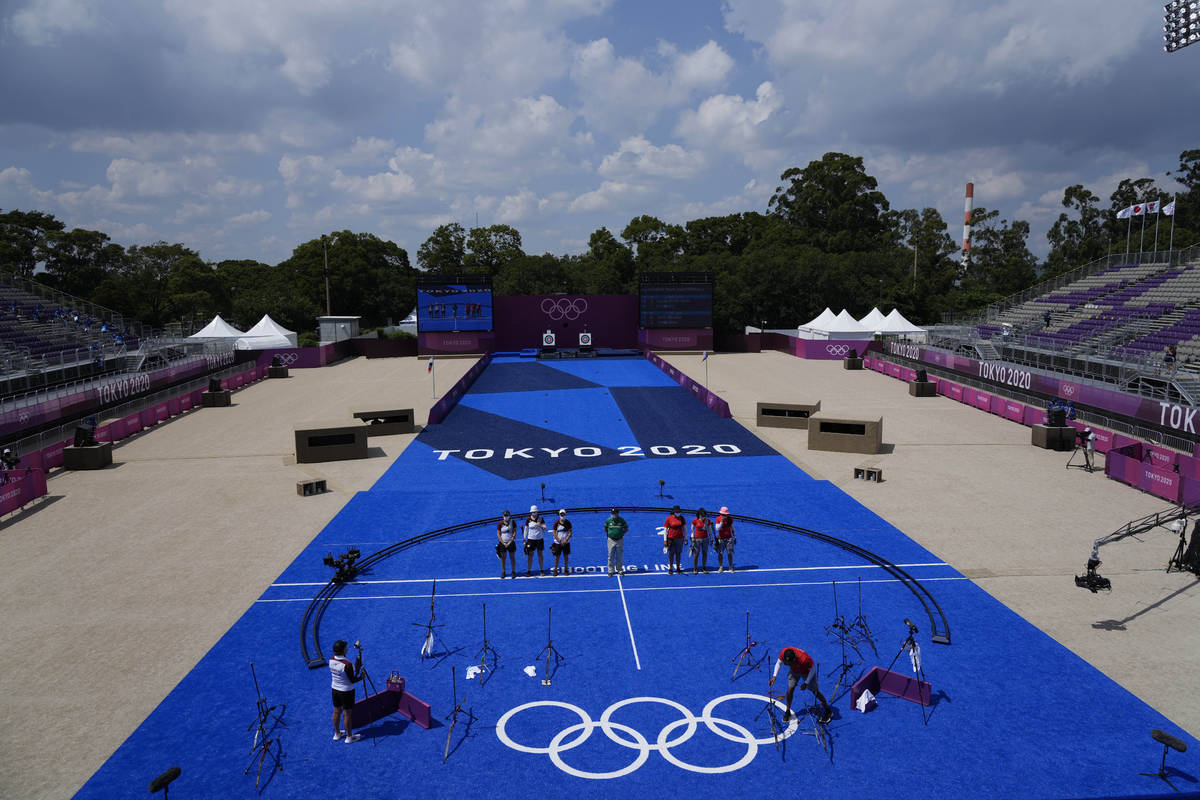 A view of the Yumenoshima Park Archery Field before the women's team competition between Germany and Mexico at the 2020 Summer Olympics, Sunday, July 25, 2021, in Tokyo, Japan. (AP Photo/Alessandra Tarantino) 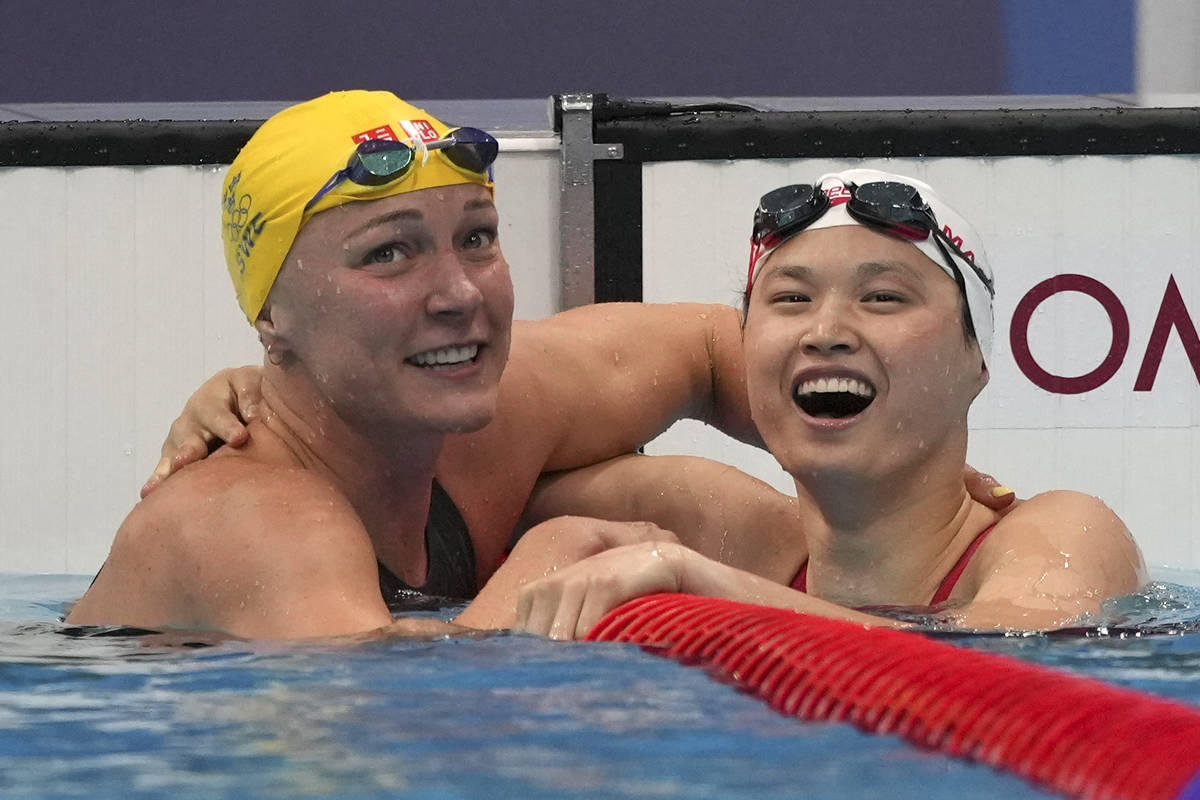 Margaret MacNeil, right, of Canada, is congratulated by Sarah Sjoestroem of Sweden103 after winning the final of the women's 100-meter butterfly at the 2020 Summer Olympics, Monday, July 26, 2021, in Tokyo, Japan. (AP Photo/Matthias Schrader)

Bowe Becker already was struggling in the pool when the COVID-19 pandemic hit last year and postponed the Olympic Games.

He seriously considered giving up swimming, but his support system of coaches, family and friends encouraged him to keep going.

Becker did, and in the winter his focus began to return. Suddenly, he had real hope of making the U.S. Olympic team. Not only did he make it, the product of Faith Lutheran High School and the Las Vegas-based Sandpipers of Nevada swim club won a gold medal Monday in the 4×100-meter relay in Tokyo.

“If the Olympics were in 2020, Bowe probably wouldn’t have made the Olympic team,” said Jake Des Roches, a coach for the Sandpipers. “The timing worked out for him. He went through a rough patch and had the strength and juice to go through that. Because of that, he was able to fight through that to now become an Olympic champion.”

The U.S. had just reclaimed the lead in the relay Monday when Becker dived into the pool to swim the third leg.

No way he was giving it up. Becker even extended the advantage for the Americans to help them repeat after also winning in 2016 at Rio de Janeiro.

Caeleb Dressel, who is seeking six gold medals in the Games, led off the American victory at the Toyota Aquatic Center with a first lap of 47.26 seconds.

The U.S. relinquished the lead to France in the second leg, but Blake Pieroni got it back just before Becker dived in for his relay leg. He gave the U.S. a .20-second lead, and Zach Apple was never challenged in the final 100 meters.

This was the first time since 2000 the U.S. team didn’t have Michael Phelps in an Olympic relay final. Three members of this team, including Becker, had never competed in an Olympic final.

Including women’s events, this was the eighth swimming medal for the U.S. at the Olympics.

This is the first Olympics for Becker, who turned 24 on July 7. It’s quite possible it’s his only Olympics, and, if so, quite a memorable experience.

“A pretty exciting night,” Des Roches said. “Bowe’s story is a unique experience in the swimming world and the success he had growing up and getting better and better and then through COVID and thinking about quitting swimming. … For Bowe to do that in a sprint freestyle, the Sandpipers have been labeled a distance (specialist team).”

The Sandpipers aren’t done. They have three female Olympic swimmers in different events.

Becker made the Olympic relay team after finishing fifth in the 100-meter freestyle at last month’s U.S. Olympic Trials in Omaha, Nebraska. He now gets to return to the U.S. a winner in the only event in which he qualified.

Becker earned All-America honors at Minnesota in the 50- and 100-meter freestyle, finishing second in the 100 free and fourth in the 50 free at the 2019 NCAA Championships. 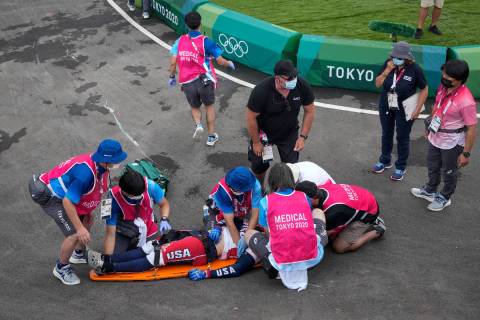