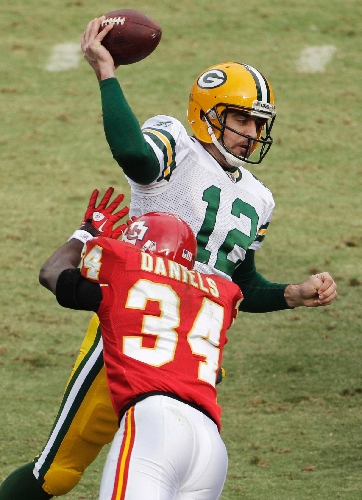 KANSAS CITY, Mo. — Mike McCarthy never put a whole lot of stock in a perfect season, except as a means of gaining home-field advantage and setting the Green Bay Packers up for another Super Bowl run.

Well, they still have a chance to earn home-field advantage.

Kyle Orton threw for 299 yards to outduel Aaron Rodgers, and the Kansas City Chiefs rallied behind interim coach Romeo Crennel for a shocking 19-14 victory on Sunday that ended the Packers’ 19-game winning streak. It was their first loss since Dec. 19, 2010, at New England.

“I personally always viewed the undefeated season as, really, just gravy,” McCarthy said. “The goal was to get home-field advantage and win the Super Bowl. That’s what we discussed.

“We were fortunate enough to be in the position to possibly achieve the undefeated season,” he added, “but we still have the primary goal in front of us, and that’s to get home-field advantage.”

Green Bay, playing without leading receiver Greg Jennings and top rusher James Starks because of injuries, can wrap up the No. 1 seed in its final two games against Chicago and Detroit. But the Packers no longer have the pressure of becoming the second team in NFL history to win a Super Bowl with a perfect record, or extending the second-longest winning streak in league history.

“I think our ultimate goal is to win a Super Bowl. The next step is getting that number one seed in the playoffs,” Rodgers said. “We’ve got a home playoff game — we’ve got a bye secured.”

Rodgers was 17 of 35 for 235 yards and a touchdown, and he also scampered 8 yards for another touchdown with 2:12 left in the game. But the Packers (13-1) were unable to recover the onside kick, and Kansas City picked up a couple of first downs to secure the victory.

“They had a good game plan,” Rodgers said. “You have to give them credit.”

Ryan Succop kicked four field goals for Kansas City (6-8), which had lost five of its last six games and fired coach Todd Haley on Dec. 12. Jackie Battle added a short touchdown plunge with 4:53 left in the game, points that came in handy when Rodgers led one last scoring drive.

Neither team looked all that tremendous in the first half.

One of them came when Kansas City’s Jeremy Horne ran into Packers punter Tim Masthay, giving them 15 free yards. The Chiefs tried to give Green Bay another gift later on the drive when Mason Crosby missed a 59-yard field-goal attempt, but Kansas City had 12 men on the field.

With another chance from 54 yards, the normally reliable Crosby still pushed the kick right.

Rodgers finished the half 6 of 17 for 59 yards, with a handful of drops between wide receiver Donald Driver and tight end Jermichael Finley.

The Chiefs were still clinging to a 6-0 lead when Rodgers finally hit downfield, finding Finley over the top of the coverage for a 41-yard gain. Three plays later, the Packers’ star quarterback hit Driver in the corner of the end zone for a 7-6 lead with 8:04 left in the third quarter.

The Packers moved into field-goal range on their ensuing drive, but rather than have Crosby attempt a 56-yard kick in the same direction he had already missed, McCarthy elected to go for it on fourth-and-9. Rodgers’ pass fell incomplete, and the Chiefs took over.

They needed seven plays to cover 59 yards, but had to settle for another field goal and a 12-7 lead. It was the third time the Chiefs drove inside the 5 and had six total points to show for it.

They got seven on their next trip, though.

With first-and-goal at the 5, Thomas Jones managed to gain a yard and Le’Ron McClain bulled ahead for three more, setting up third down from just outside the goal line. Battle took the carry over the right side and powered into the end zone, giving the woeful Kansas City offense its highest-scoring game since the Chiefs beat San Diego in overtime in late October.