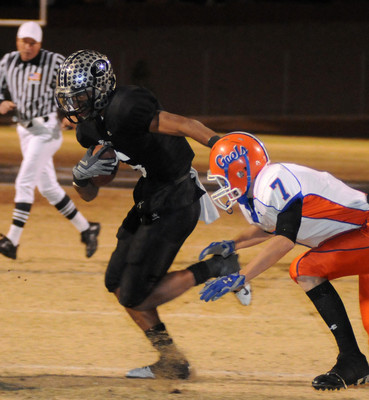 Palo Verde still uses the double wing as its base set, but the Panthers have added various shotgun formations and at times even spread receivers wide. All of those options have Faircloth nervous.

“They’re a lot to prepare for,” he said. “They show you a lot of different looks and formations. I think we’ve counted 12 of them right now. They make it a lot tougher to prepare for.”

Faircloth soon will learn how well prepared his team is — or isn’t. The Wildcats (12-1) play the Panthers (13-0) in the Class 4A state semifinals at 1 p.m. Saturday at Arbor View.

Palo Verde coach Darwin Rost said he has broadened his offense largely because other teams have begun running the double wing.

“You can credit a lot of that to Cheyenne and Arbor View,” Rost said. “With everybody starting to run a version of the double wing, people are starting to see it a little more. We were the only team running it for a while.”

Another reason the Panthers’ offense has evolved is tremendous athletes such as senior Torin Harris. He has committed to Southern California as a defensive back but also is a versatile offensive star.

Harris will see time at both running back spots and has been taking shotgun snaps at quarterback.

“You put one of the fastest kids in the nation at quarterback taking direct snaps, it kind of changes everything,” Faircloth noted. “And they’re spreading kids out. They never used to spread out receivers. They’re putting just phenomenal athletes out there and getting them the ball.”

Rost said his team had to devise ways to get the ball in Harris’ hands more often. The senior has rushed for 426 yards and eight touchdowns on 43 carries and has six catches for 152 yards and four TDs. Harris also has returned two interceptions for scores and has an 85-yard kickoff return for a TD.

“I’m not the smartest coach, but if a guy like (USC coach) Pete Carroll is going to offer him a full ride, I’ve got to look at him,” Rost said. “You definitely want to get the ball in his hands.”

Harris even has become a passing threat, completing 8 of 9 for 63 yards and a touchdown. He completed all three attempts — all shovel passes — during the Panthers’ 50-14 win over Bishop Gorman in the Sunset Region championship game.

“He can do so much,” Rost said. “Now he’s throwing the ball a little bit. We added a lot of wrinkles for him.”

“They absolutely riddled Gorman, and Gorman was known to be a very good defensive team,” Faircloth said. “They bring a lot to the table. With all they’re doing and the talent they have to do it with, it’s going to be very difficult.”