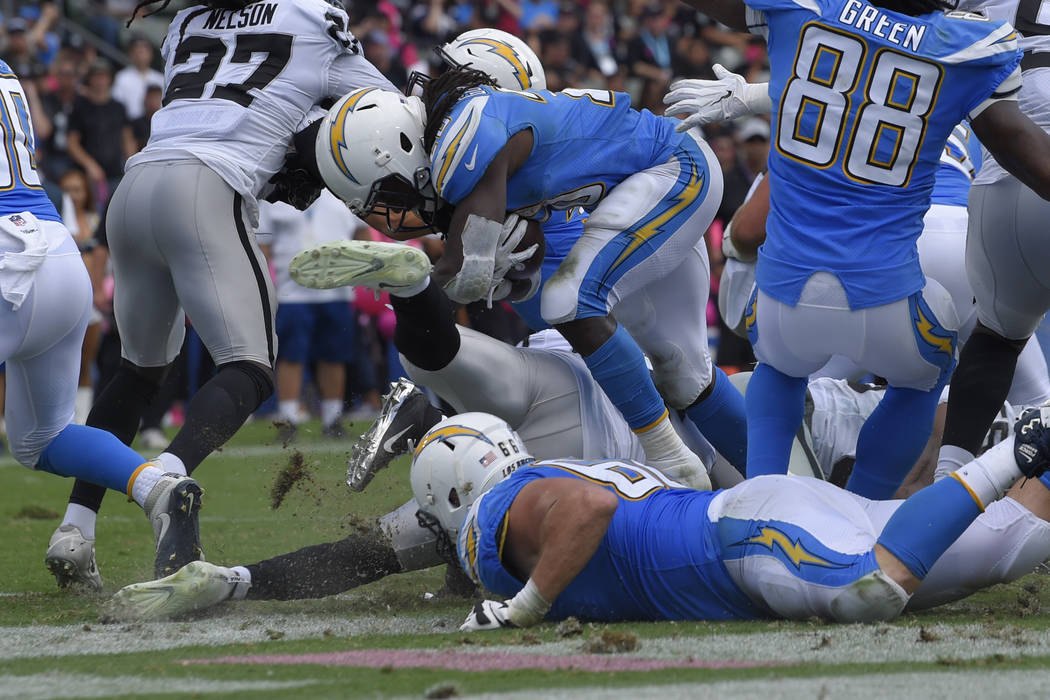 Los Angeles Chargers running back Melvin Gordon, center, scores a touchdown during the first half of an NFL football game against the Oakland Raiders Sunday, Oct. 7, 2018, in Carson, Calif. (AP Photo/Mark J. Terrill)

Oakland was embarrassed by its crosstown rival 34-3. It doesn’t get easier for the Raiders (1-7), who host the Los Angeles Chargers (6-2) on Sunday in an AFC West matchup.

The Raiders fell to the Chargers 26-10 on Oct. 7 at the StubHub Center in Carson, California. The Chargers are coming off a 25-17 victory over the Seattle Seahawks in Week 9.

Here are five things you need to know about the Raiders’ Week 10 opponent:

Chargers quarterback Philip Rivers is on pace to throw for more than 4,000 yards for the sixth consecutive season and is showing no signs of slowing down in his 15th NFL season. Rivers is known for being aggressive down the field, but this season he’s protecting the ball. He has three interceptions with 19 touchdown passes and is completing 67.1 percent. Rivers has the Chargers’ offense averaging 27.5 points. Rivers has had many memorable seasons in his decorated career, but this might be his best one in a few years.

Against the Seahawks last week, Pro Bowl wideout Keenan Allen broke one of his two season-long droughts. Allen had six catches for 124 yards, the first time he surpassed 100 yards receiving in a game since Week 1 against the Chiefs. But he didn’t find the end zone. He has only one touchdown this season, also on opening day. Allen had a similar start a year ago before catching fire in the final two months. The Raiders’ poor secondary could have a long day trying to keep up with Allen.

Running back Melvin Gordon didn’t miss a beat in his return to the Chargers’ lineup after being sidelined against the Tennessee Titans in Week 7 because of a hamstring injury. The bye week came at the right time for Gordon, as he rushed for 113 yards on 16 carries and a touchdown versus the Seahawks. Gordon’s numbers this season compare to standout running backs Todd Gurley and Alvin Kamara. Gordon has 579 rushing yards and is averaging 5.4 yards per rush and has found the end zone seven times.

For the second time this season, the Raiders might not face Pro Bowl defensive end Joey Bosa, who’s missed the first eight games with a foot injury. That’s good news for a Raiders’ offensive line that gave up seven sacks against the 49ers last week. The Raiders still will have to deal with standout edge rusher Melvin Ingram. The Chargers have recorded 22 sacks, tied for 14th best in the league heading into Thursday. The Raiders’ defense is ranked last in sacks recorded with seven.

Raiders quarterback Derek Carr will be looking to bounce back after a dreadful performance versus the 49ers. Carr will face a secondary that features rookie of the year candidate Derwin James at safety. Casey Hayward is one of the best cornerbacks in the league.