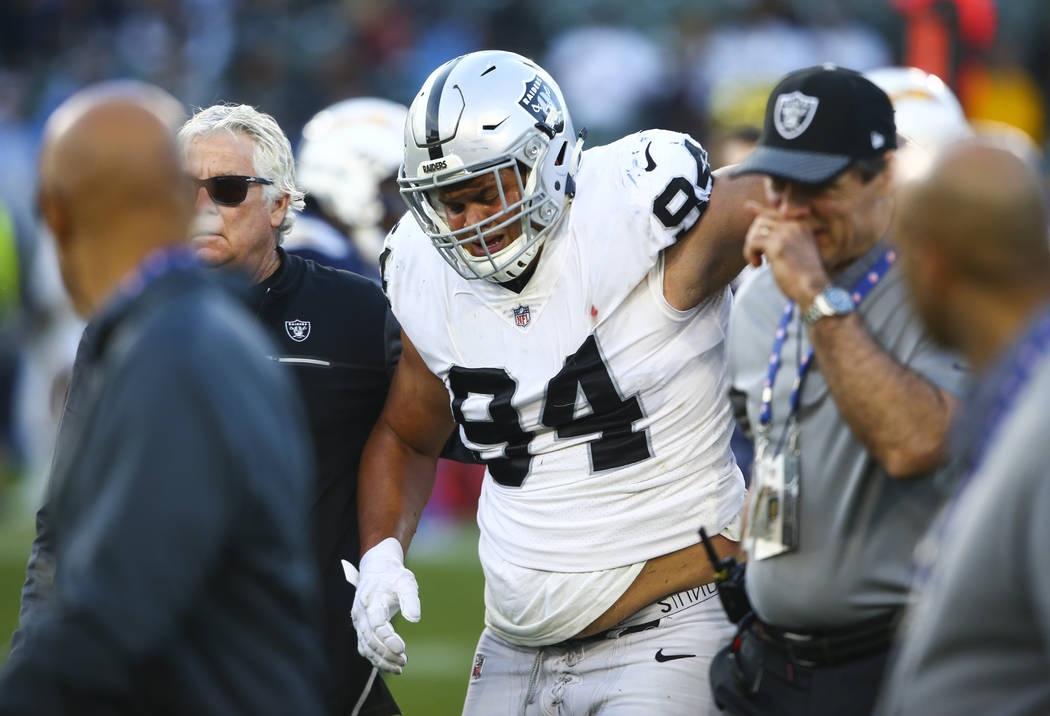 The Raiders defensive tackle mapped out his entire offseason, starting at Proactive Sports Performance in Thousand Oaks, California. He’d then shift his training to Arizona, uniting with a coach who trained him before the 2017 NFL scouting combine.

On his personal time, he planned to rewatch all 464 of his defensive snaps.

Vanderdoes is expected to rejoin the Raiders’ 53-man roster this weekend. It is unclear if he will be active Sunday against the Los Angeles Chargers, given he has practiced three weeks all year. The former third-round pick suffered a torn ACL on Dec. 31 during the fourth quarter of the 2017 season finale against the Chargers.

On Friday, coach Jon Gruden is expected to clarify whether Vanderdoes will return on Sunday or the following weekend against the Arizona Cardinals.

In either event, he is close.

“I think Eddie Vanderdoes is doing very well,” Gruden said Wednesday. “I don’t know that he’ll be up this week, but Arizona is a legitimate target for him.”

The 24-year-old was robbed the opportunity to make a significant jump between his first and second NFL season.

Coaches often considered that post-rookie offseason as the largest leap in a player’s development. Because of reconstructive knee surgery, he was stripped of those training gains in Los Angeles and Arizona before the Raiders reconvened in April for their workout program.

Even his 2017 film wasn’t available for review, Vanderdoes said. It was off his iPad.

Vanderdoes was expected to return during the second week of training camp.

He suffered a setback, however, while working to the side with tackle Donald Penn, who was coming off foot surgery.

Vanderdoes thus began the regular season on the physically unable to perform list.

Guenther said Thursday that he was counting on having Vanderdoes all season. For that matter, the same goes for other players such as defensive end Khalil Mack, who was traded nine days before the season opener, and nose tackle Justin Ellis, who suffered a foot injury in the first week.

Defensive end Bruce Irvin and linebacker Derrick Johnson opened the year as co-captains and starters. By midseason, both were released. Cornerback Rashaan Melvin was a Week 1 starter. In the past two games, he’s been a healthy scratch. Like Vanderdoes, Guenther has adjusted.

“When I took the job, there were a lot of guys that were either up for free agency or that I thought were going to be on the roster,” Guenther said. “Obviously, there were a lot of changes. Guys got signed to other teams, and we had to fill in those spots with some veterans with the cap money that we had. It’s been a challenge. …

“(Vanderdoes) is another guy we spoke about. Before I took the job, I saw (Ellis), I saw Vanderdoes, Mack and the linebacker (NaVorro Bowman). I had all those guys out there, so I watched Vanderdoes closely last year, and he did some good things. He’s a natural fit for our system. It’s just that we got to get him up to speed to make sure that he is ready to go, and we will see by the end of the week how we feel about that.”

Vanderdoes soon will make his 2018 debut.

This one should stick.