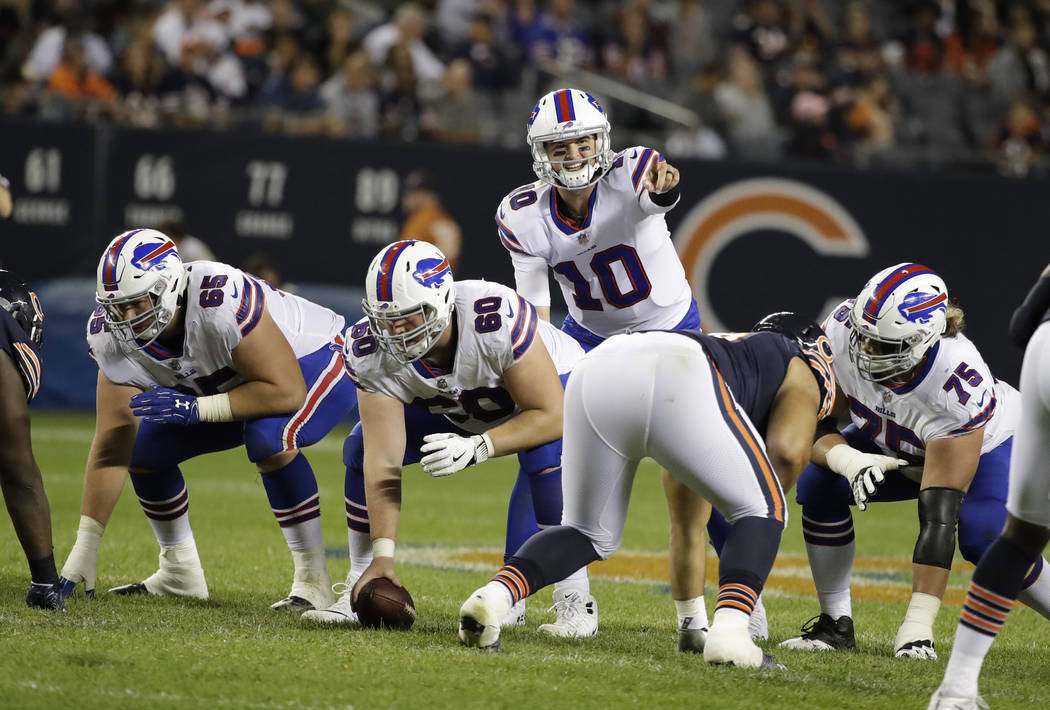 Buffalo Bills quarterback AJ McCarron (10) calls a play against the Chicago Bears during the second half of an NFL preseason football game in Chicago, Thursday, Aug. 30, 2018. (AP Photo/Nam Y. Huh)

On that, they and McCarron agree.

“God forbid I get out there, it’s not going to be perfect,” McCarron said Thursday. “But I know how to battle and keep trying.”

EJ Manuel and Connor Cook competed this offseason for the Raiders’ backup quarterback job. Today, neither remains. Manuel won the spot but was released Saturday after the club traded for McCarron. The move gave McCarron nine days to leave upstate New York, where he owned a house, and learn an offense before the season opener against the Los Angeles Rams.

Aside from garbage time in a blowout victory, the Raiders hope not to need McCarron in 2018.

They sent a 2019 fifth-round pick to the Buffalo Bills for his services. Although he signed a two-year, $10 million contract with Buffalo this March, he comes at an affordable price. Of that contract, $4 million stems to a signing bonus the Bills already paid. Most of the rest is tied up in incentives that don’t currently impact the Raiders’ salary cap.

Still, McCarron must prepare as if he’ll be called upon.

His work hours more or less can be summarized as “daylight.” On Thursday, offensive coordinator Greg Olson said that McCarron and quarterbacks coach Brian Callahan have been working from dusk to dawn when teaching him the playbook. Quarterback Derek Carr had a whole offseason to learn coach Jon Gruden’s offense before his first game appearance. Conceivably, McCarron could have a week.

“I do a pretty good job of managing all of that,” McCarron said. “When it comes to knowing football, I like to think I’m pretty smart. You can only play so many defenses. It’s just being real familiar and knowing really the ins and outs of the offense. … I enjoyed my time (in Buffalo), even though it was for a cup of coffee and maybe a doughnut. The people there are great. The fans are really awesome. We lived in a great neighborhood. It was an awesome city, and we enjoyed our time there. If anybody is looking, we have a house for sale in Buffalo.”

■ Defensive coordinator Paul Guenther joked Thursday that his reaction to Saturday’s trade of Khalil Mack was “Are you kidding me?” He quickly added that he understands and supports the organization’s attempt to build its roster “the right way. We made the decision to go in that direction because if you keep one player around, you are going to lose seven others.” Guenther was unable to coach Mack. The two randomly did happen to meet, though, at a restaurant in March.

■ Running back DeAndre Washington (knee) was the only player not to practice.