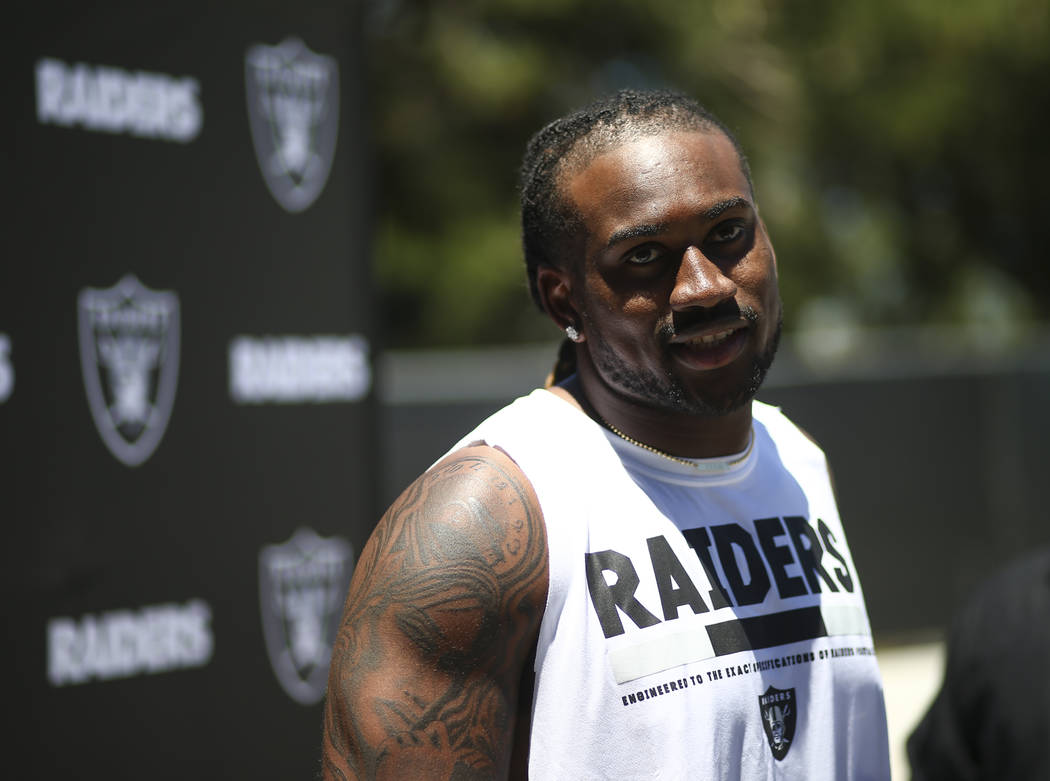 ALAMEDA, Calif. — Cordarrelle Patterson caught as many touchdowns during Wednesday’s practice as he did during his past three seasons with the Vikings. The last of the three came on a back-shoulder E.J. Manuel pass for which he scaled into the air, high-pointing the ball over cornerback Dexter McDonald.

Teammates were sent into a tizzy.

Several rushed over and congratulated him.

A fresh start sure looks good on the new Raiders wide receiver.

Patterson arrived to the Bay Area in March following a four-year stint in Minnesota. He largely was used on special teams with the Vikings, and that could be the case again here. But Patterson also has shown this spring he could handle a more meaningful role on offense.

To date, he’s yet to surpass 500 receiving yards in a season. He logged 453 on 52 catches last year, which followed a 2015 campaign in which he was buried on the offensive depth chart, being targeted on just two passes over 57 snaps.

“He’s a fun tool,” offensive coordinator Todd Downing said recently. “I won’t speak too much about how he was used in the past; that’s somebody else’s job. But I can tell you that we’re going to have fun looking for ways to get him involved in the offense. He’s a big, strong, physical, dynamic-with-the-ball-in-his-hands type player, and we’re excited to see what he can do for us.”

Of course, that includes special teams, too.

Patterson is slated to be the Raiders’ primary kickoff returner. In 2016, his 31.7 average yards per kickoff return led the league. His 104-yard return last November against the Cardinals was the longest in the NFL all year.

“We’re excited about him,” special-teams coordinator Brad Seely said. “We’re really happy he’s on our roster. Obviously, in Minnesota, he was an outstanding returner. We feel like he can bring that to our table. He also can be a coverage guy for us on punt team. And it always comes down to how much offense is he going to play. We want to keep our guys as fresh as possible and balance with getting as many reps out of them as we can.”

The Raiders are keeping a work-life balance.

Cornerback Gareon Conley was a spectator Wednesday, being held out of practice for undisclosed reasons. The first-round pick is considered to be having a strong spring. …The Raiders drafted safety Shalom Luani in the seventh round for his ball skills. Those were on display Wednesday with an interception returned for a touchdown and a deflection on a deep Derek Carr pass intended for Amari Cooper. …Manuel predominantly has worked as the Raiders’ No. 3 quarterback this spring. A day after the third-team offense struggled noticeably, he handled second-team quarterback reps and found a better rhythm. Connor Cook worked with the third team.