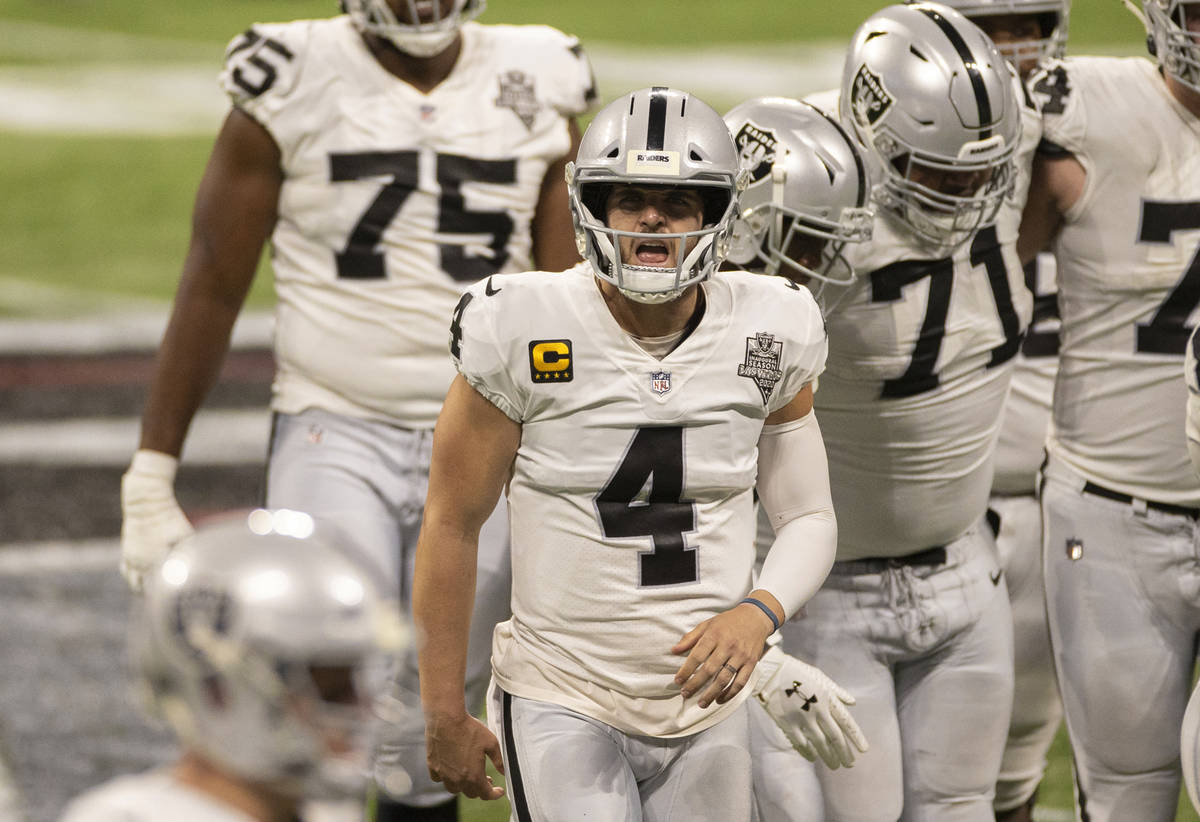 Las Vegas Raiders quarterback Derek Carr (4) jogs off the field dejected after a three-and-out in the third quarter during an NFL football game against the Atlanta Falcons on Sunday, Nov. 29, 2020, at Mercedes-Benz Stadium, in Atlanta, Ga. (Benjamin Hager/Las Vegas Review-Journal) @benjaminhphoto

As the Raiders gathered Wednesday for their first workout since Sunday’s embarrassing loss to the Falcons, quarterback Derek Carr wanted to make one thing clear.

His comments expressing disappointment about the Raiders’ work week leading up to that game should not be construed as criticism of Jon Gruden and the coaching staff.

In fact, Gruden and Carr later talked through Carr’s postgame comments, at which point Carr made sure his coach understood this was not about the game plan or preparation from the coaching staff. “I said, ‘You know Coach, we were prepared.’ It wasn’t that,” Carr said.

Carr said his frustration was directed at himself and his teammates.

“I think just the execution that I demand on myself and sometimes some things people don’t see,” Carr said, referring to his not doing a good enough job looking off primary receivers, handling his footwork, maintaining ball security and making the right protection calls. “I just thought maybe a couple of those things should’ve been better, and they should’ve been.”

As a team leader, Carr said he felt something needed to be said. But he said preparation begins with the individual player.

“We try our best as a team and as leaders to make sure we’re always bringing the juice personally first,” Carr said. “And secondly, everyone in our position group around us is bringing it so that we feel the effort at practice. Even when you don’t get the ball, are you finishing your block? Or when your buddy runs a route and you didn’t think it was his best route, he didn’t get the ball, are you correcting him? Are you still staying on him because there’s a standard and ultimate success that we want. From the team, inside out, you have to be able to hold each other to that standard.”

Upon regathering as a team on Wednesday, Carr felt the message was heeded.

“I think today was a great day,” he said.

After losing to the Falcons to fall to 6-5 and on the outside edge of the playoff race, the Raiders understand the importance of bouncing back against the New York Jets on Sunday to either make up ground in the postseason chase or keep pace.

A loss, on the other hand, could have a profound impact. Does that make this week a must-win situation?

“My whole life, I feel like it’s a single-elimination day,” Gruden said smiling, before getting serious. “We have a sense of urgency every day. We got to get everybody together. We have a good mindset here. We didn’t lose last week because we were distracted but … we realize what’s at stake and we got to just play a lot better than we did a week ago. If we do, we will have a chance to survive.”

There is no getting around the ball-security issues of Carr, whose three fumbles on Sunday against the Falcons increases his total to 11 on the season and 63 for his career. His career total ranks 13th among active quarterbacks.

“It’s not a stat I’m proud of, it’s not something that I love,” Carr said “Honestly, there’s nothing that makes me more sick after a game is if I threw an interception or fumbled the football, no matter the reason.”

The turnovers are the result of a variety of issues ranging from Carr not having two hands on the ball to taking a blindside hit to getting the ball dislodged as he was winding up to throw. It is also fair to point out a banged-up offensive line has sometimes had difficulty keeping Carr’s pocket clean.

Whatever the case, Carr is determined to get it corrected.

“When something like that happens, I just try my best to look at the film and see what could I have done better in that play,” Carr said. “And sometimes I have to take a deep breath and realize sometimes there is nothing you could do about it.”