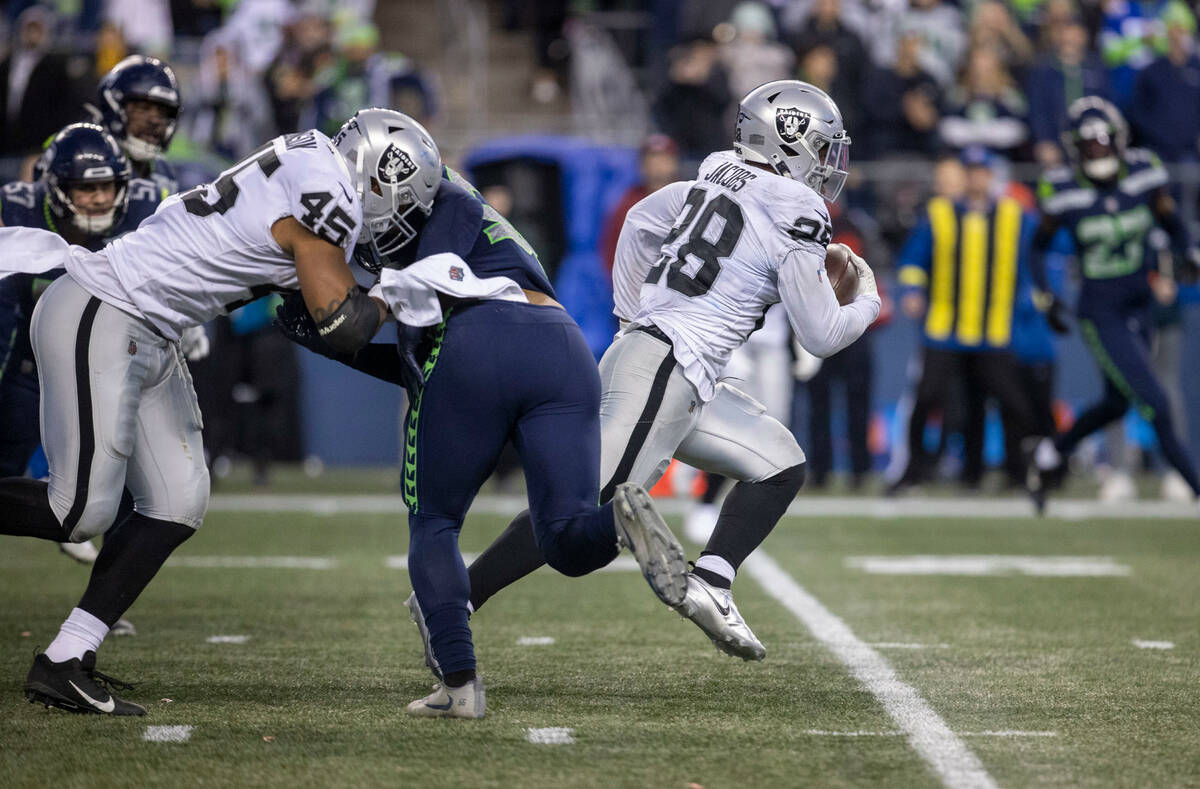 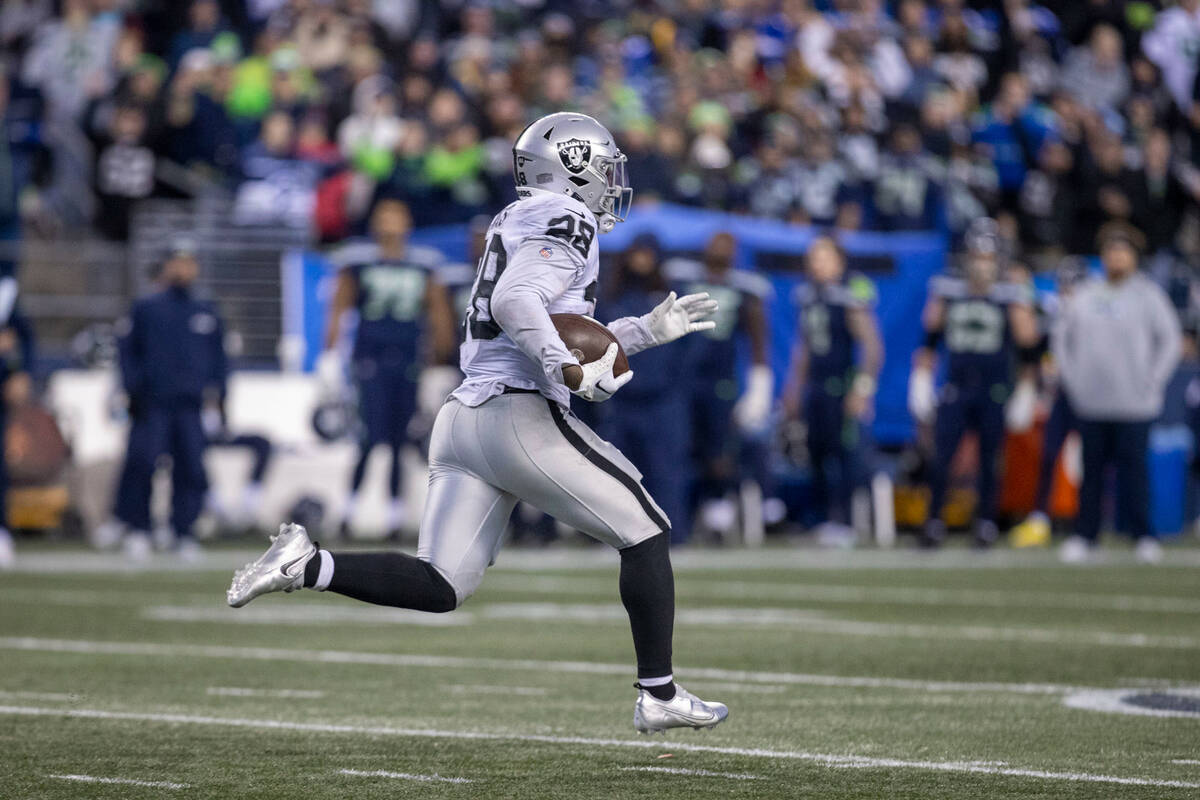 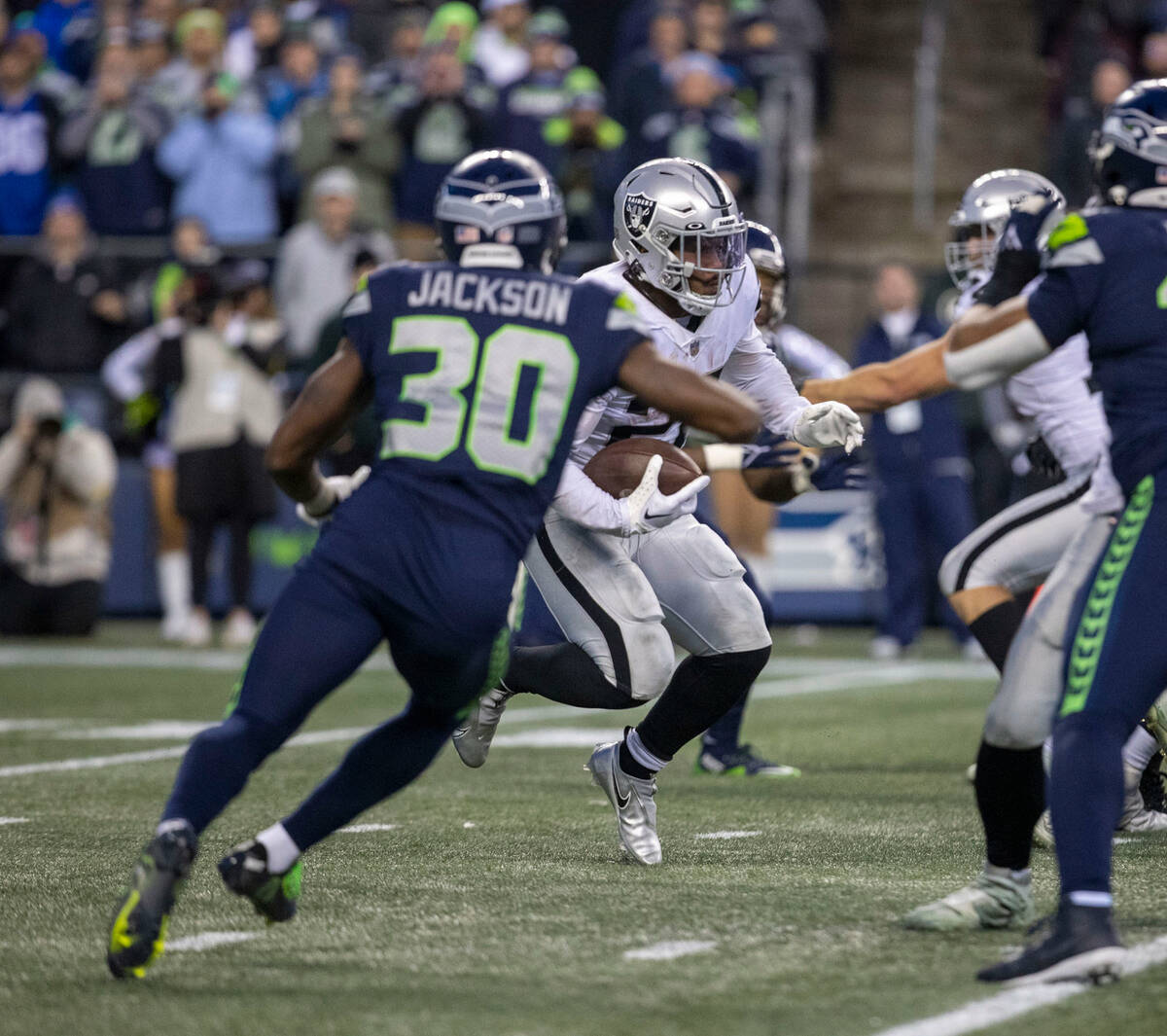 Raiders running back Josh Jacobs (28) looks for room as Seattle Seahawks cornerback Mike Jackson (30) attempts to close in before Jacobs broke free on a 86-yard touchdown run during overtime of an NFL game at Lumen Field on Sunday, Nov. 27, 2022, in Seattle. (Heidi Fang/Las Vegas Review-Journal) @HeidiFang 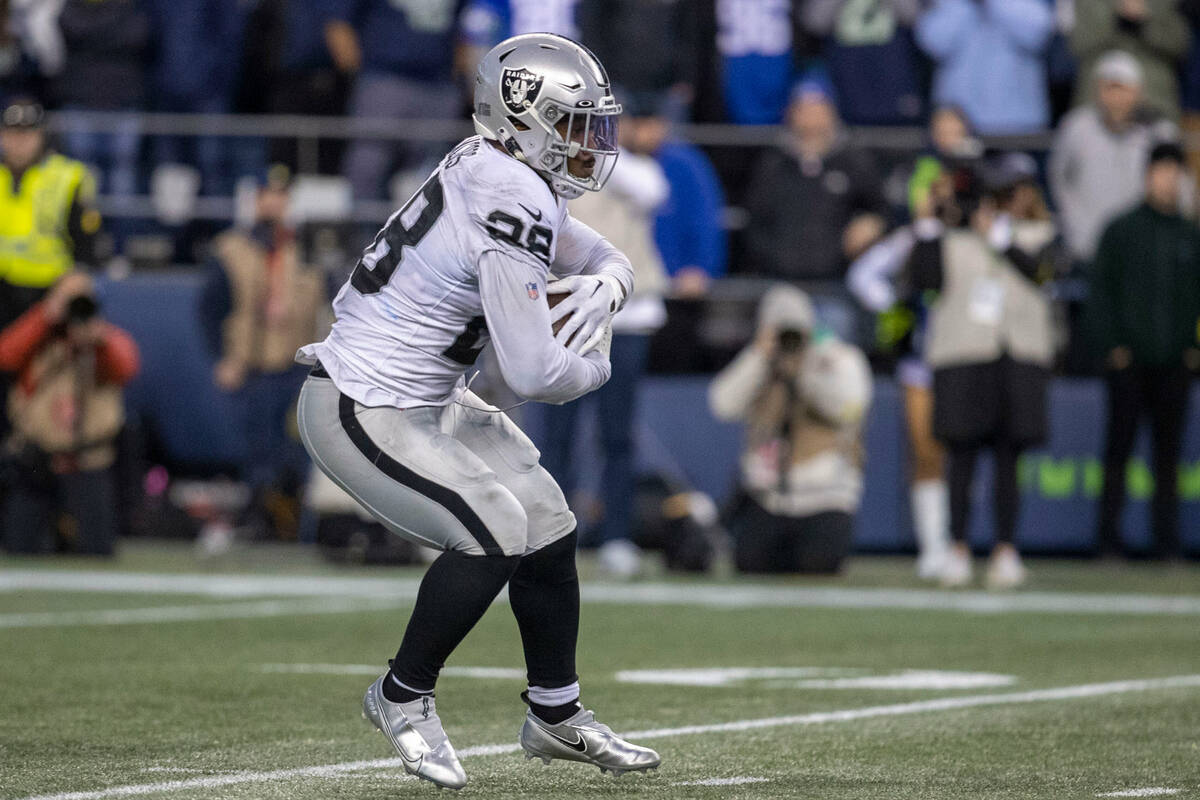 Raiders running back Josh Jacobs (28) looks for room to run before breaking free on a 86-yard touchdown run during overtime of an NFL game at Lumen Field against the Seattle Seahawks on Sunday, Nov. 27, 2022, in Seattle. (Heidi Fang/Las Vegas Review-Journal) @HeidiFang

Josh Jacobs’ 86-yard touchdown run that beat the Seahawks in overtime Sunday was one of the most basic, mundane plays in the Raiders’ playbook.

The isolation lead (ISO), after all, is a call every coach from pee-wee football to the NFL has tucked away somewhere and one that thousands of teams over the years have turned to when needing a couple of yards.

In a larger sense, though, what unfolded Sunday during Jacobs’ long run is the poster example for the foundation coach Josh McDaniels and general manager Dave Ziegler have been trying to lay since they were hired.

Just do your job, and good things will happen.

“It’s what we’ve been talking about all camp, all season,” fullback Jakob Johnson said. “Everybody doing what they have to do, on every play, consistently.”

Said wide receiver Mack Hollins: “A great example of what that means, everybody do their job. Because every block mattered. It wasn’t like one block sprung him. It was every guy had to do something to make it happen.”

That left the Raiders — with Johnson at fullback, Jacobs behind him at halfback and tight end Foster Moreau lined up next to right tackle Jermaine Eluemunor — in a favorable seven-on-seven blocking position at the point of attack.

Carr immediately checked the Raiders from a pass play to a run play. At that point, it came down to execution.

Hollins, lined up to Carr’s right, heard the play-call change and moved two steps to his left. His job was to block Diggs for Jacobs.

To the left of Hollins, Moreau tapped Eluemunor on the leg, getting confirmation on their blocking assignment. Moreau then took out outside linebacker Uchenna Nwosu and Eluemunor took on defensive tackle Poona Ford. As a result, a hole opened for Jacobs.

That’s where Johnson came in as the lead blocker for Jacobs. Johnson was on a collision course with linebacker Jordyn Brooks. The winner of the battle will determine whether Jacobs got to the second level, and with Johnson turning Brooks to his right and Jacobs making a perfect read, Jacobs shot between Johnson and Eluemunor.

“We know we have special players with the ball in their hands,” Johnson said. “We just have to work hard to put them in position to do that.”

At that point, it’s already a successful play. But turning it into something special required two more steps. First, Hollins had to stay engaged with Jones downfield, and Jacobs had to shake Diggs, the lone unblocked player who is now headed toward Jacobs.

Hollins shielded Jones from Jacobs, and Jacobs saw Diggs flying toward him from his left. Jacobs used a slight lean and subtle foot jab to give the impression he was cutting left, forcing Diggs to hesitate just long enough for Jacobs to take off to the right and swoosh past a diving Diggs.

Game over. But as Carr pointed out, none of it would have happened without everyone doing their homework.

“If everyone’s doing that, then our team will do better down the road,” Carr said. “And we can have plays like Josh’s long run.”