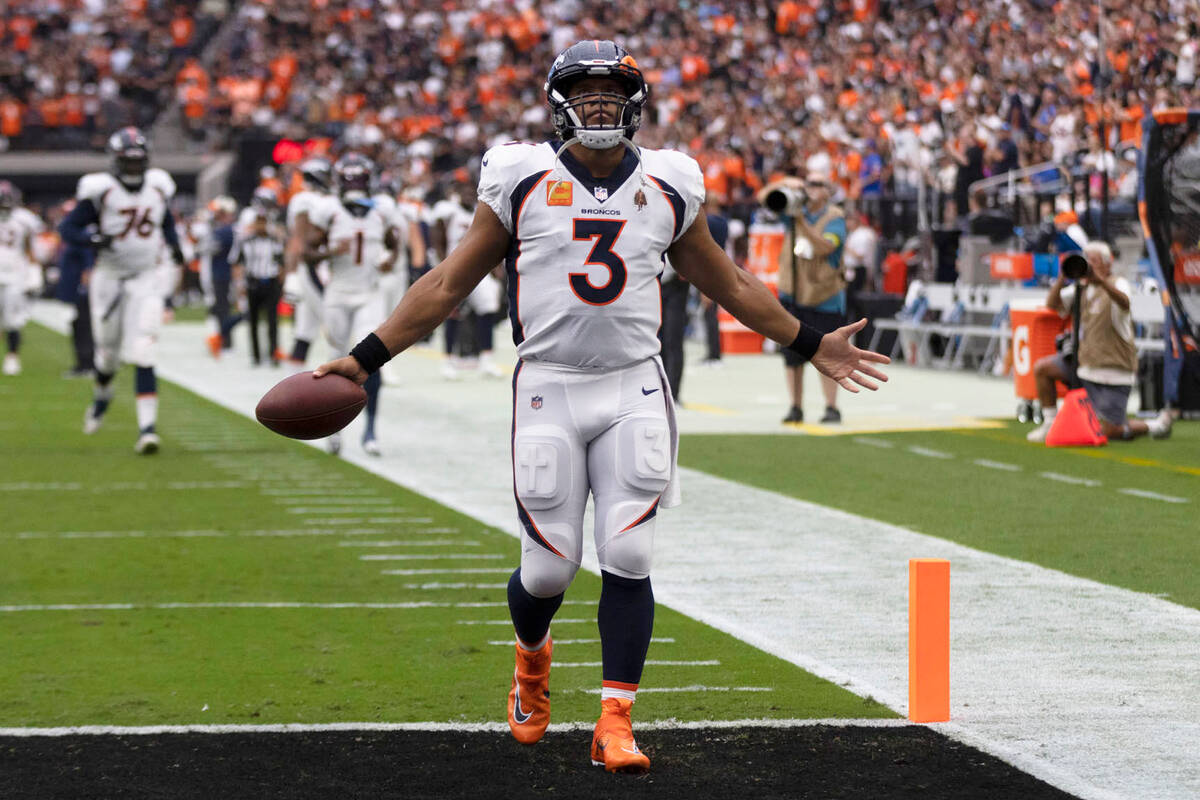 Denver Broncos quarterback Russell Wilson (3) gestures as he comes to the end zone before an NFL game against the Raiders at Allegiant Stadium on Sunday, Oct. 2, 2022, in Las Vegas. (Heidi Fang/Las Vegas Review-Journal) @HeidiFang 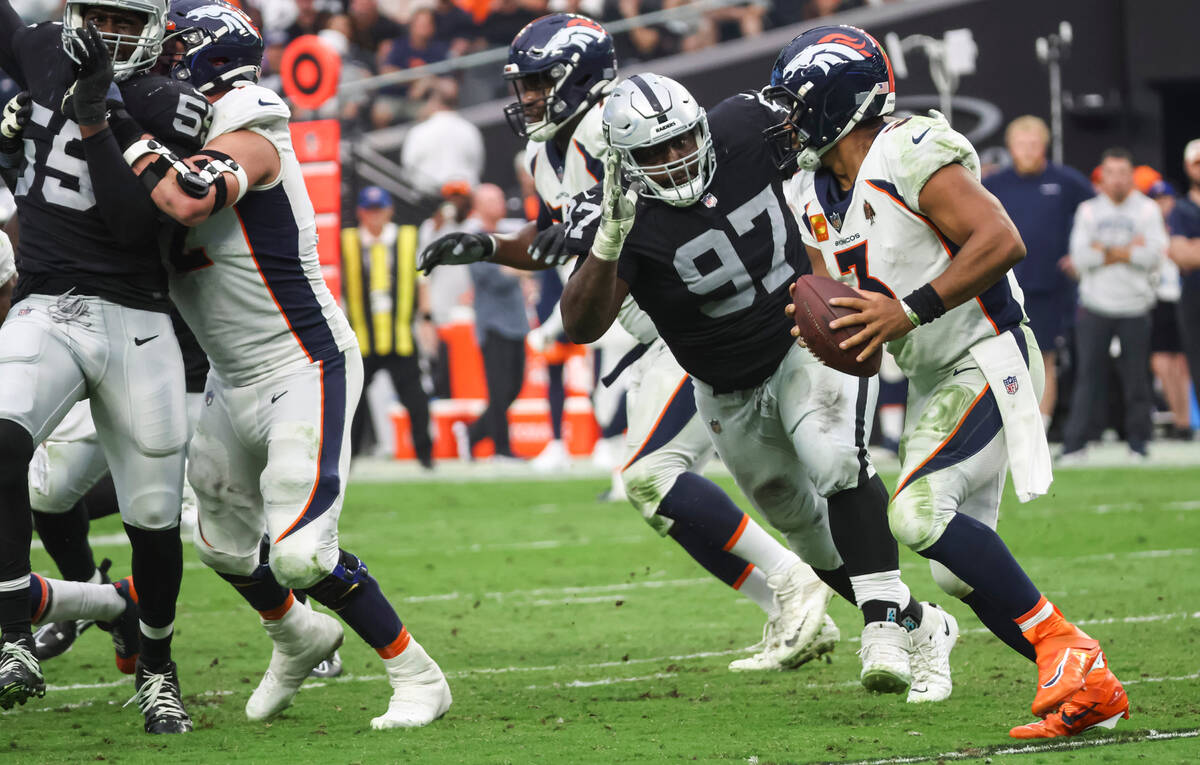 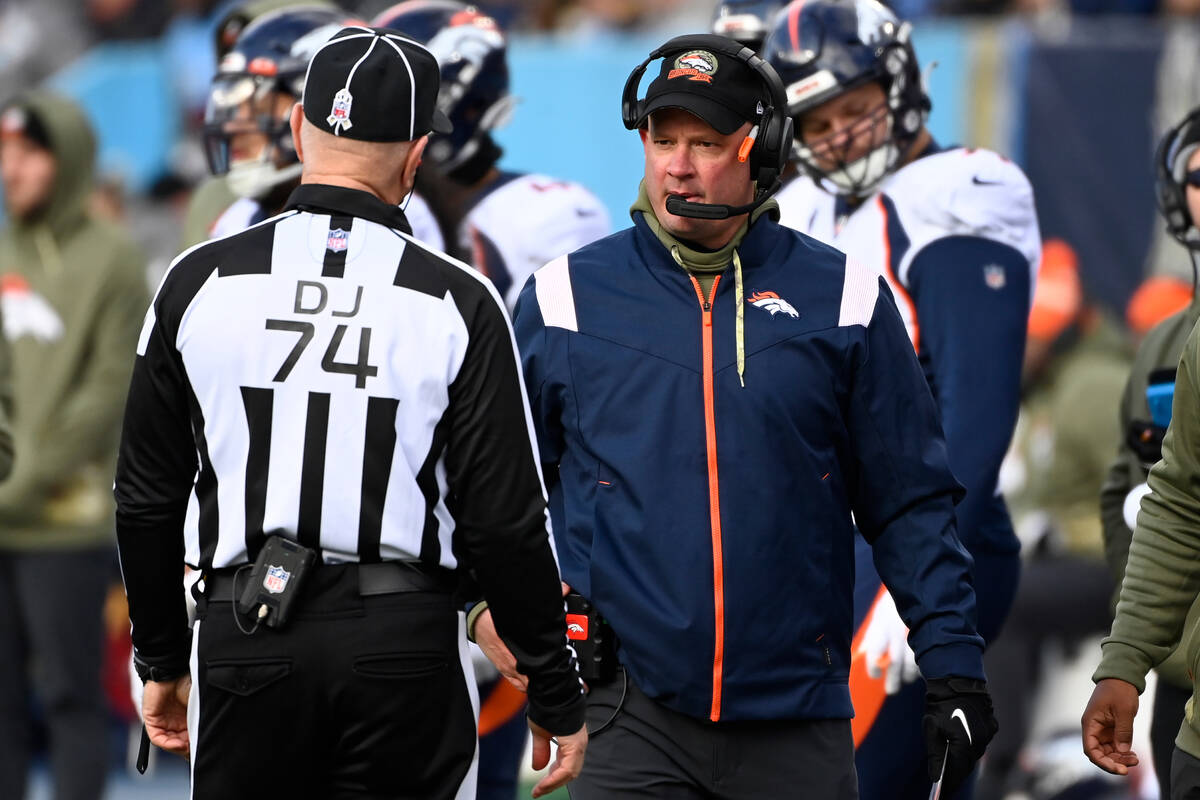 Denver Broncos head coach Nathaniel Hackett talks with an official during the first half of an NFL football game against the Tennessee Titans Sunday, Nov. 13, 2022, in Nashville, Tenn. (AP Photo/Mark Zaleski)

Right around the same time the Raiders were being crowned the offseason champions, so, too, were the Broncos after they traded for star quarterback Russell Wilson.

Finally, a talent-laden roster was being crowned with the missing jewel. Wilson would be the quarterback to push the Broncos back to Super Bowl contention.

Then the games began, and — much like the Raiders — what looked so promising on paper quickly turned to fool’s dust.

The positive effect Wilson was expected to have, in conjunction with offensive-minded first-year coach Nathaniel Hackett, turned negative from the jump. The Broncos are last in offense in the NFL, averaging 14.6 points per game, and have a 3-6 record entering Sunday’s game against the Raiders (2-7) at Empower Field at Mile High.

Hackett’s game plans have been questionable. Wilson appears to be a bad fit in the scheme and plays as if his best years are behind him.

He ranks 27th in the NFL in total quarterback rating at 33.0. The Broncos can’t run the ball and have trouble passing it. The defense is more than adequate, but can only do so much.

There’s not much the Broncos can do with Wilson, either. His contract has a $165 million guarantee and runs through at least the 2025 season.

Wilson, who won a Super Bowl with the Seahawks, accepts the blame for the team’s dismal record.

“I have to play better. It starts with me,” said Wilson, who turns 34 on Nov. 29. “I have to find ways to make some more plays out there for us, more touchdowns.”

He still believes in himself.

“I’ve been down before. It doesn’t mean that we can’t come out on the other end of it all,” Wilson said. “It takes a lot of work ethic and a lot of appreciation to continue to give everything you have every day. That’s not going to change, no matter our record.”

He hopes the turnaround begins Sunday.

“We have a great rivalry, obviously,” Wilson said. “An AFC matchup against the Raiders. There’s a lot of history there. We have to make sure that we step up to the plate and play our best football.”

That won’t happen unless Hackett, who has been criticized since Week 1, gets the offense on track.

“It hasn’t been a very successful offense, and we have a lot of things that we want to get better at,” he said.