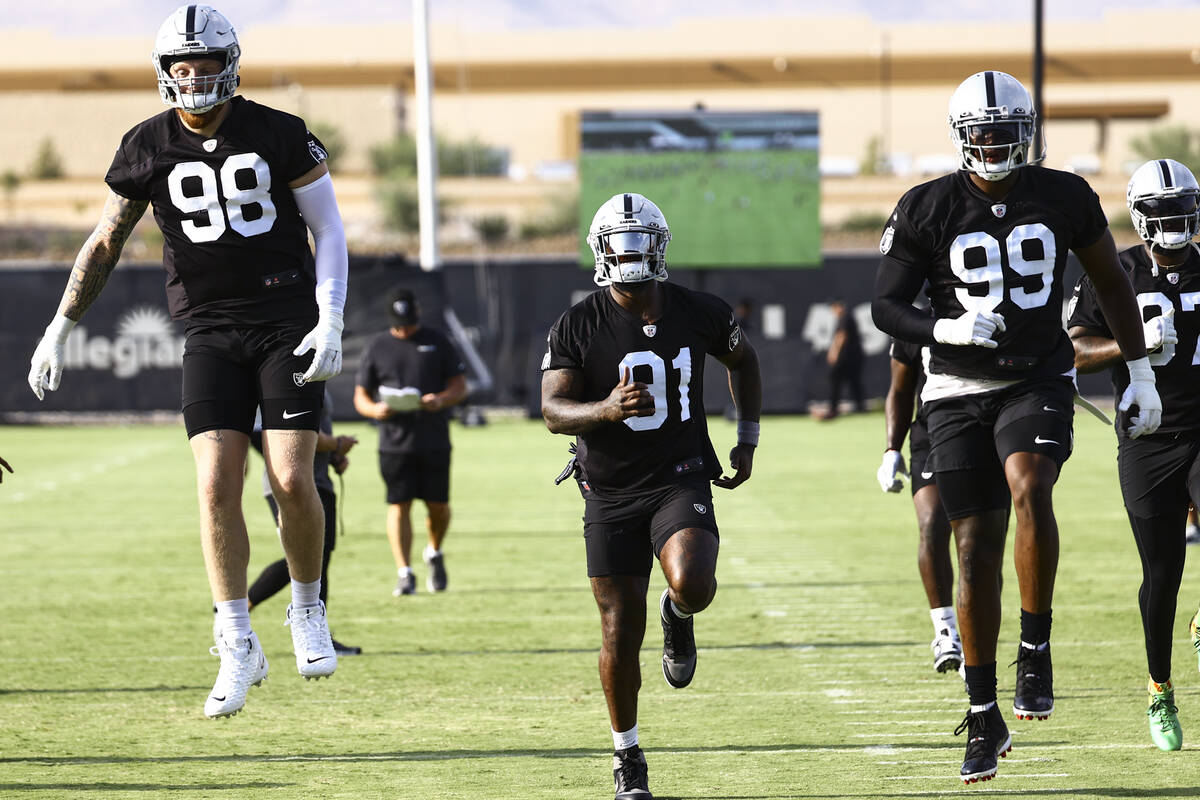 Editor’s note: This is the second of two parts grading the Raiders’ roster entering the season. Today: the defense.

The Raiders desperately need their defense to begin holding up its end of the bargain after surrendering 29.9 points per game last year, third worst in the NFL.

The hiring of defensive coordinator Gus Bradley, the improvement of several first-, second- and third-year players and the addition of key newcomers at all three levels is designed to accomplish that.

But it is all talk until it shows up on the field.

Here is a breakdown of the Raiders’ defense. ( * — injured reserve; + — suspended list.)

■ What’s new? Ngakoue was the Raiders’ big-ticket free agent. He instantly adds an established pass rusher. Since 2016, Ngakoue has 45.5 sacks and 18 forced fumbles. Koonce, a rookie from Buffalo, also has impressed with his pass-rush instincts.

■ Bottom line: The Raiders want to create a four-man defensive end rotation headed by Ngakoue and Crosby and backed up by Ferrell and Nassib. The goal is to come at opposing offenses in waves while ensuring this group can finish games and seasons strong. Koonce is expected to work his way into a situational role as a rookie. On paper, this group looks very good. But Crosby, Ferrell and Nassib need to take big steps forward for the potential to become reality.

■ What’s new? The Raiders invested heavily in this position with the additions of Jefferson, McCoy, Thomas and Philon. In a matter of months, this group turned from average to highly intriguing.

■ Bottom line: The Raiders have built a deep, versatile, experienced rotation at defensive tackle, and it doesn’t even account for Ferrell, who will kick inside in certain situations. It’s hard to fathom this group not measuring up and delivering the necessary production.

■ What’s new?: The Raiders got to work at the end of training camp by trading for Perryman and adding Wright in free agency. Part of it was out of necessity after Morrow went down with an injury. But the reality is the Raiders could not afford to go into the season with so little experience behind the starters.

■ Bottom line: Wright and Perryman were valuable additions, not just in terms of talent but also scheme knowledge, thanks to their experience playing for Bradley. They take a ton of pressure off Littleton, who can now settle in in his second season in Las Vegas, and Kwiatkoski, who played well in his first season with the Raiders in 2020. Once Morrow comes back, this group will look even better.

■ What’s new? Hayward was brought in from Los Angeles, where he spent four seasons playing under Bradley with the Chargers. The Raiders are keeping their fingers crossed that Hobbs is everything he appeared to be as a training camp and preseason sensation.

■ Bottom line: It’s hard to argue the Raiders won’t be better off at this position compared to last year, maybe even much so. For that to happen, however, Mullen must be better in Year Three, Arnette and Robertson must rebound from shaky rookie seasons and Hobbs must be as good as advertised. All of that is within the realm of possibility, but until it happens, it’s more hope than certainty.

■ What’s new? Abram will play a new role as the box safety, the hope being his skill set as a punishing tackler and pass rusher is a better fit lining up closer to the line of scrimmage. It also mitigates his weakness in pass coverage, allowing him to defend a more condensed area of the field. Moehrig, who the Raiders drafted in the second round out of TCU, will be a Day One starter and bring a new level of poise and talent to the free safety position. Rookie Gillespie and young prospect Teamer were both training camp standouts.

■ Bottom line: Much like so many positional groups, the safeties look much better on paper but are still a question mark given the reliance on young players and Abram’s ability to make a successful transition to a new role. If it works out, the Raiders will be in great shape on the back end. If not, they will continue to struggle