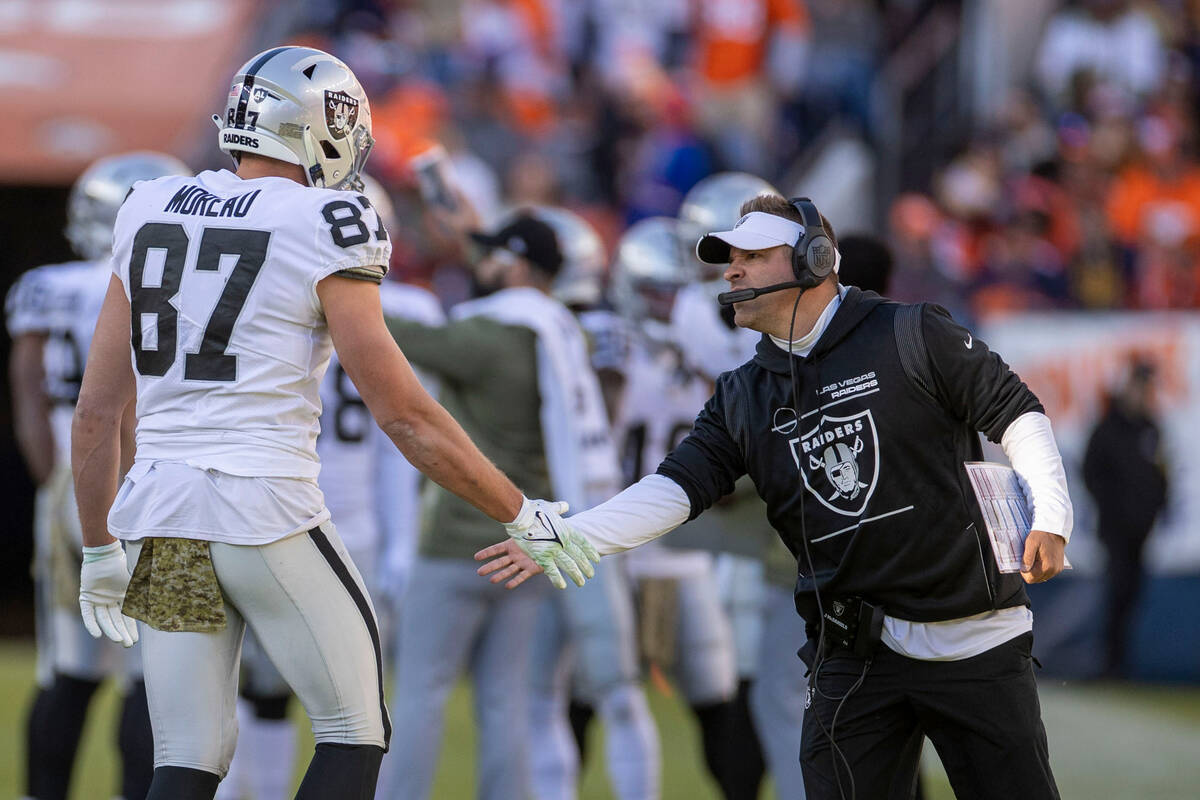 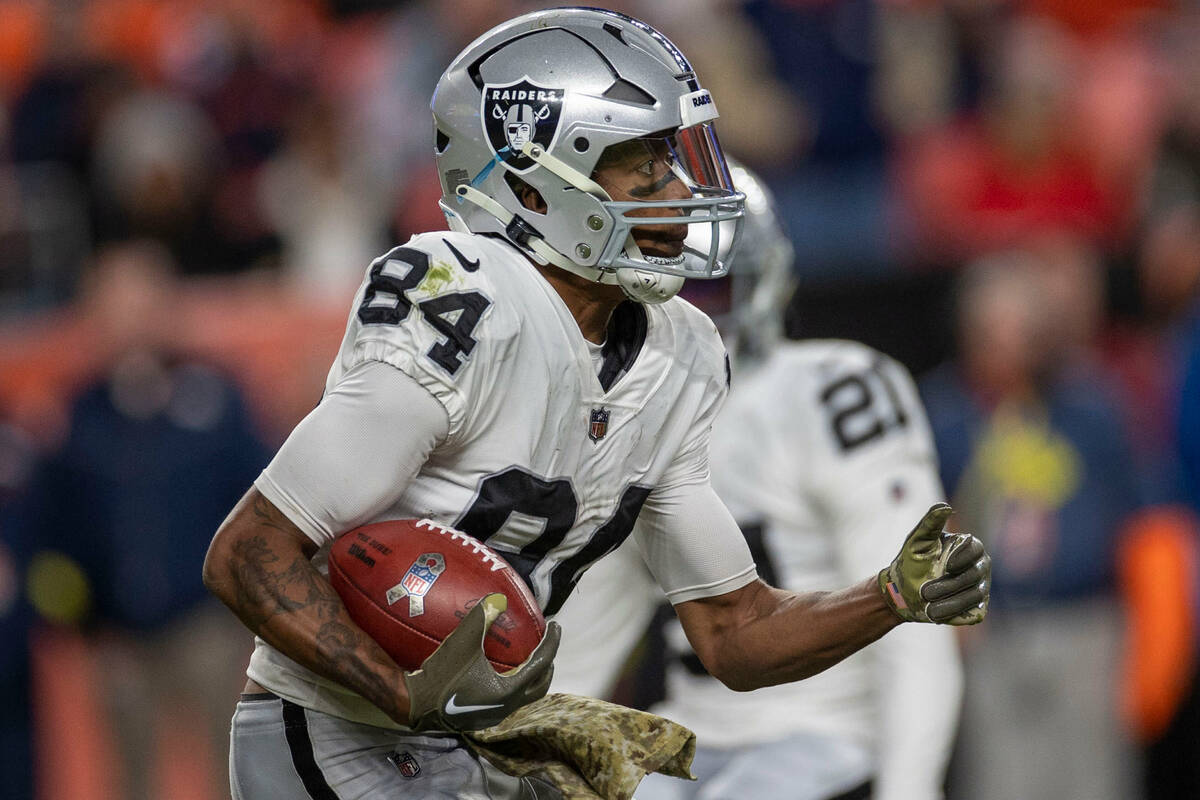 Raiders wide receiver Keelan Cole (84) runs for more yards on a return during the second half of an NFL game against the Denver Broncos at Empower Field at Mile High Stadium on Sunday, Nov. 20, 2022, in Denver. (Heidi Fang/Las Vegas Review-Journal) @HeidiFang 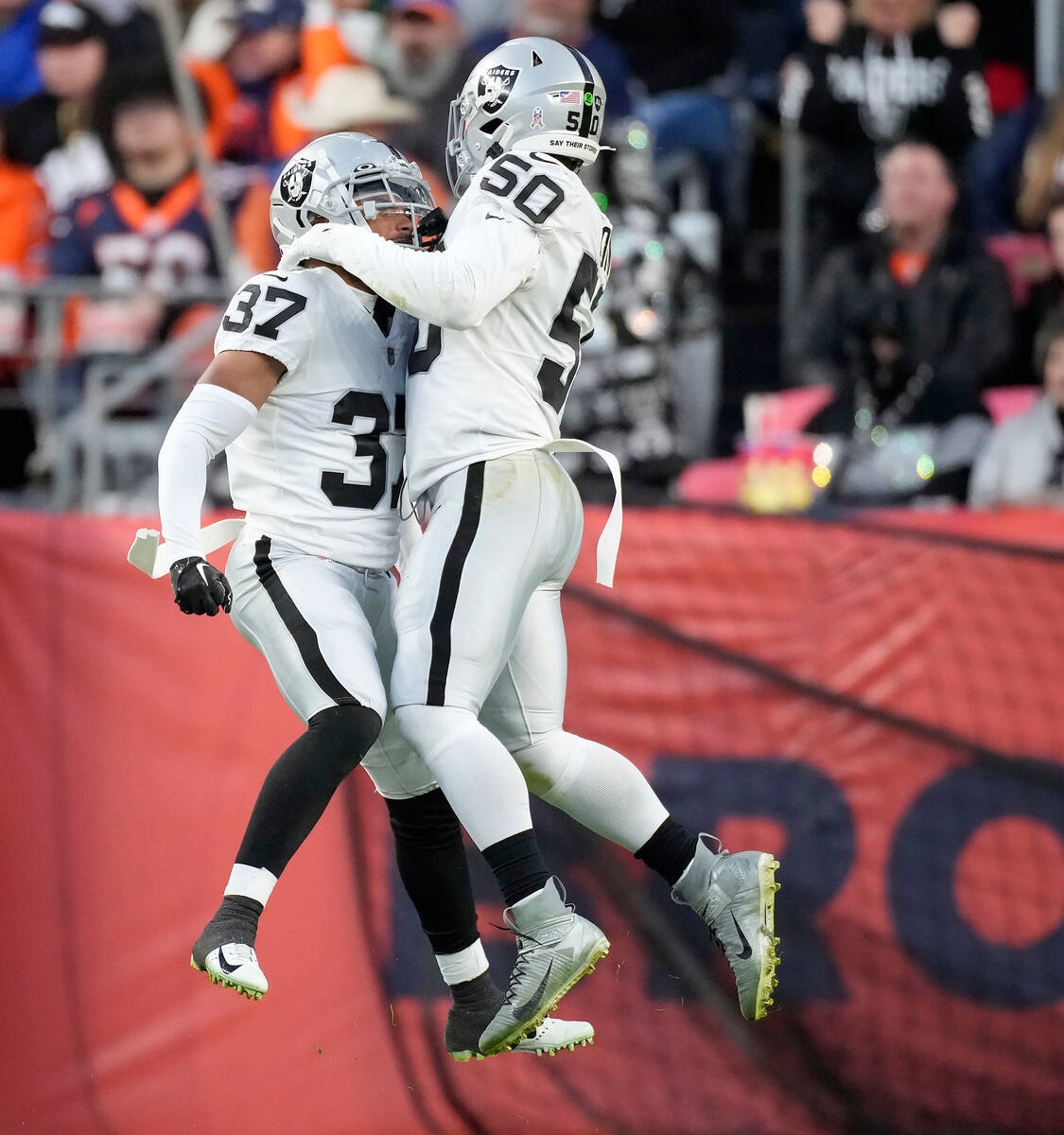 And with 80 or so seconds left in regulation opposite Denver’s best corner, Cole sprinted down the sideline, curled beneath Patrick Surtain and caught a 22-yard pass — thereby extending the drive with his fourth reception of the season.

“It always feels good to be a contribution to a win,” said the 29-year-old journeyman, who played last season with the New York Jets and the previous four for the Jacksonville Jaguars.

“But definitely, it makes you eager to make more (plays).”

The Raiders would certainly welcome more plays like that from Cole and the roster’s other complementary players, who played a vital role Sunday in the 22-16 victory over Denver — their first in seven one-score games this season.

Reserve cornerback Tyler Hall, elevated Sunday from the practice squad, had a key sack in the fourth quarter, and tight end Foster Moreau preceded Davante Adams’ game-winning touchdown reception with a crucial 33-yard catch and run up the seam.

Among those relieved is Adams, the 29-year-old All-Pro who has exceeded 100 receiving yards the last three weeks in spite of defensive coverage designed to limit his productivity.

“That’s been pretty much the talk of the town. That’s what coach has been emphasizing all year is obviously they are going to use certain coverages to try to take me away, so guys have got to step up and make plays,” said Adams, a perennial All-Pro. “So that’s basically what we’ve got to do as a team. If other guys are going to get doubled and they want to take Foster away or they want to take Mack [Hollins] away on a fade and double him, then I’ve got to step up or other guys got to do the same thing.”

Perhaps they did Sunday, but the Raiders have otherwise struggled this season to make key plays when Adams and Pro Bowl-caliber running back Josh Jacobs are neutralized.

Conversely, the Raiders are seeking timely production from defenders like Maxx Crosby, who is playing at a Pro Bowl level and recorded two sacks, forced a fumble and blocked a field goal against Denver.

Crosby has nine of the team’s 13 sacks and 16 of 36 tackles for loss. Adams is fourth in the NFL with 925 receiving yards, catching 10 of Carr’s 15 touchdown passes and recording six of the club’s seven 100-yard receiving outings.

Jacobs is third in the NFL with 930 rushing yards — nearly 900 more than Carr, who has 67 rushing yards to rank second among Raiders players.

The attention the trio warrants creates opportunities during games for their teammates to exploit different weaknesses in opposing schemes. Journeyman wideout Mack Hollins is a prime example, recording career highs in receptions (36) and receiving yards (468) in 10 games starting opposite Adams.

But the Sunday contributions from Cole, a reserve, and Moreau, a reserve starting because of an injury to tight end Darren Waller, are just as crucial.

“I think you give them opportunities, and I think you keep doing things in practice that allow them to get more comfortable when their number is called during the course of the game,” Raiders coach Josh McDaniels said, emphasizing that the coaching staff works to develop the players on the practice squad as well.

“This is such a league of attrition, that eventually those guys are going to end up playing anyway. I mean, that’s why they’re here. We don’t have anybody here that we don’t like and don’t feel like we could have an opportunity to win with,” McDaniels added.

‘We can repeat it’

With their first one-score victory of the season behind them, Moreau hopes the Raiders can have similar success in the close games they’ve now proven they can win.

“Do your job, have fun doing it and bring positive energy,” said Moreau, a fourth-year tight end from LSU who doubles as a key cog within the rushing offense as well. Moreau is hardly a focal point in the passing offense, but his career-high 31.4 yards per game reflect a combination of improvement and opportunity.

Cole intimated that he’s accustomed to sporadic targets and opportunities, given that he was not drafted after a college career at Kentucky Wesleyan, a Division II program.

“That’s how that (expletive) be, for my career, I jump in when I’m ready or when it’s time,” Cole said. “And you’ve just got to do what you’ve got to do.”

The hope internally is that players like Moreau and Cole can continue to produce when their number is called, easing the burden on their All-Pro teammates. Reserve cornerback Amik Robertson is among those who have contributed to victory this season, forcing and returning a fumble 68 yards Oct. 3 in the Raiders’ first victory over Denver.

Hollins caught a touchdown pass Oct. 23 in a victory over the Houston Texans that safety Duron Harmon punctuated with a 73-yard interception return for a touchdown.

Such plays are paramount to team success.

“In our minds, we hope that it’s a matter of us doing it once and then we can repeat it,” Moreau said. “Until you do it once, you’re not going to repeat anything. It’s obviously a struggle because we preach situational awareness, as all the other 31 teams do, and we just need to continue to execute down the stretch. Especially when it gets hard.”