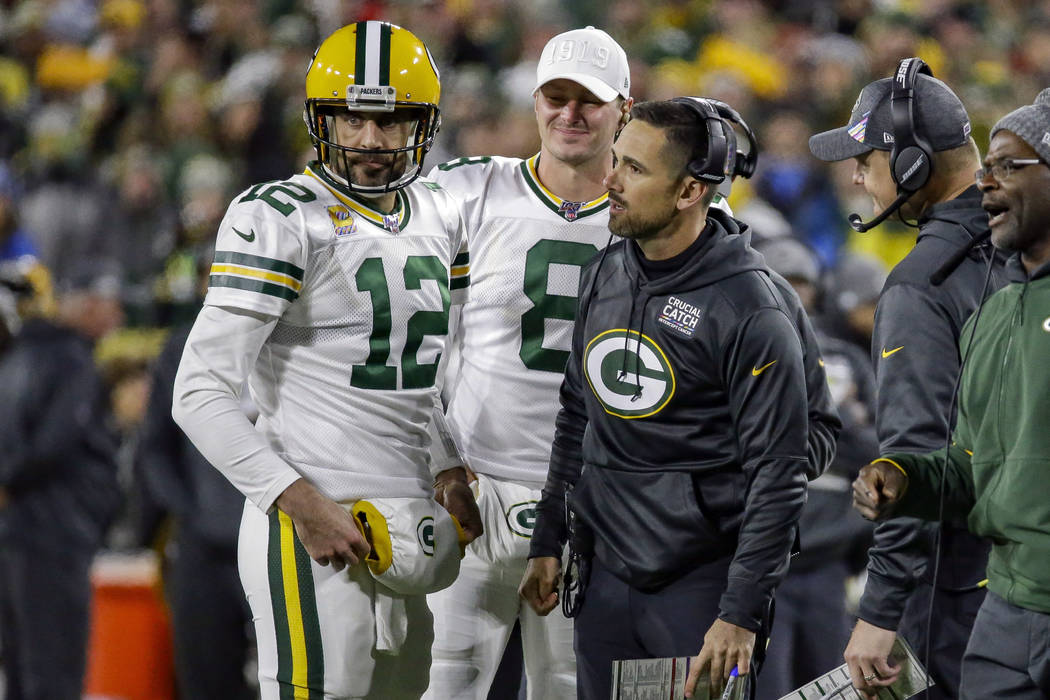 Green Bay Packers quarterback Aaron Rodgers (12) and head coach Matt LaFleur, third from left, talk during a timeout in the first half of an NFL football game against the Detroit Lions, Monday, Oct. 14, 2019, in Green Bay, Wis. (AP Photo/Mike Roemer) 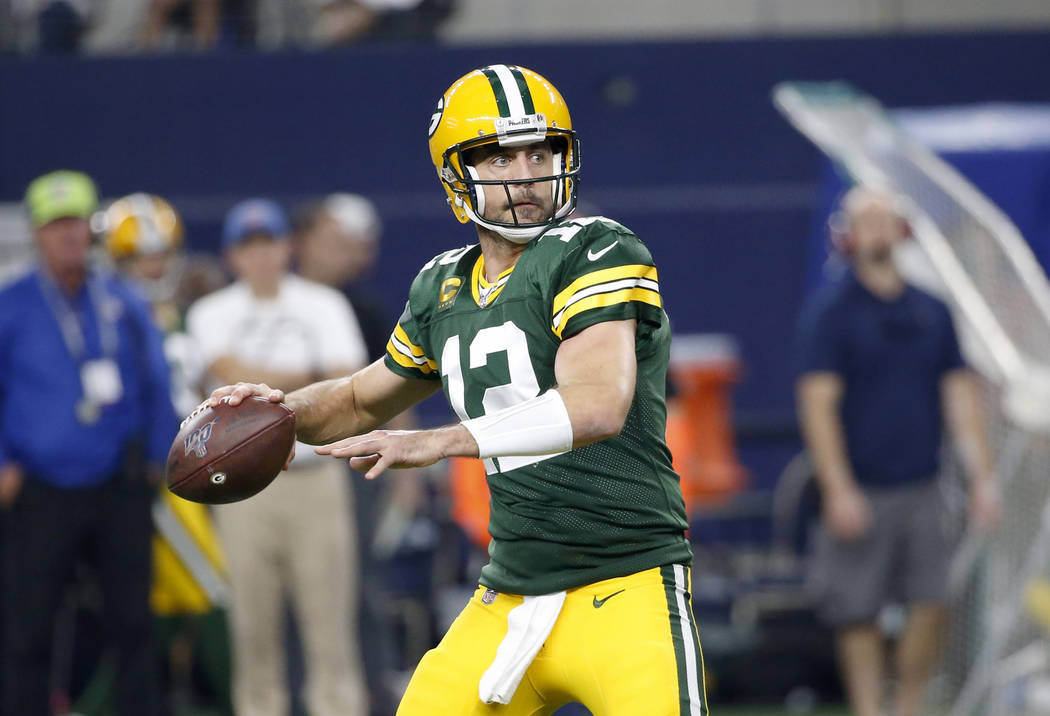 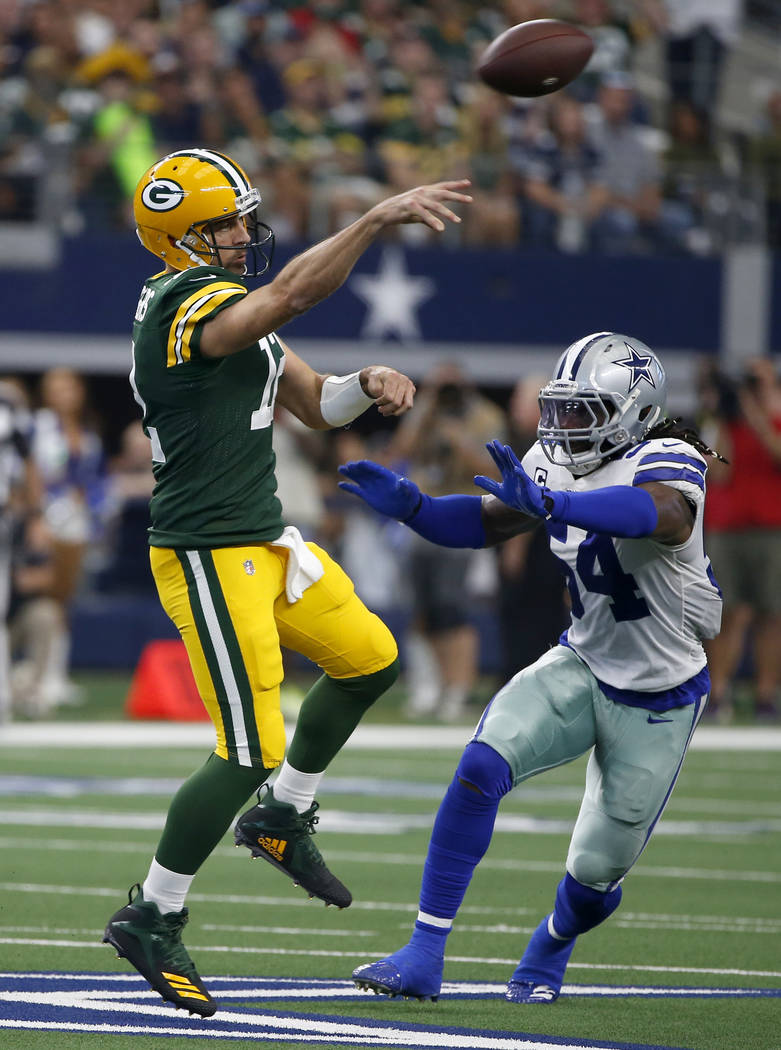 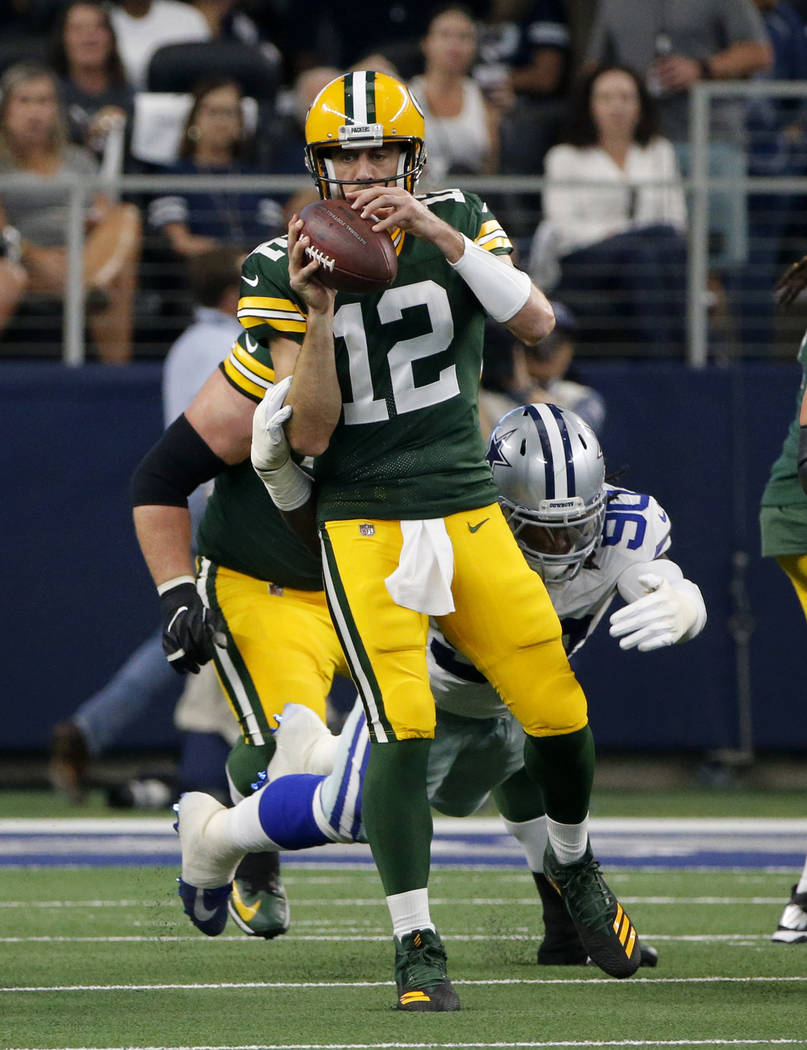 GREEN BAY, Wis. — There were times during DeShone Kizer’s stint as Aaron Rodgers’ backup with the Packers that the future Hall of Fame quarterback would draw upon an experience for which Kizer had no point of reference.

It’s why, despite the obvious arm talent and improvisational skills combined with the quick release, that Kizer points to Rodgers’ brain as his biggest weapon.

“Him being the intellect and the mastermind he is, he’s able to recall a lot of situations from the past that gives him a leg up on any other quarterback in this league,” said Kizer, who returns to Lambeau Field with the Raiders, who meet the Packers on Sunday.

“I recall plenty of moments in between drives or at halftime where he would refer to a play from when I was still in high school when they were being run and using that as examples to get into new plays that turned out to be very successful. It’s amazing.”

Raiders coach Jon Gruden said he consulted with Kizer and receiver Trevor Davis, who was traded from the Packers to the Raiders last month, on the game plan this past week as they tried to conceive a way to slow Rodgers.

There’s only so much that can be done in the meeting room, though. Rodgers is a Super Bowl champion and two-time MVP who has a multitude of NFL records because he truly shines when a play breaks down and he has to make something happen.

“His magnificence scrambling and creating offense is just uncommon,” Gruden said. “It’s just unbearable to watch. I hate watching this guy. He’s fun to watch, but he’s really not fun to watch when you’ve got to play against him. He still has a very quick trigger, deadly accurate, a lot of overall athleticism and a great competitor.”

Raiders defensive coordinator Paul Guenther embraces the challenge. Even coming off a bye week and with extra time to prepare, he knows he’s in store for a chess match in calling defensive signals and aware that even if he gets it right, Rodgers still might find a way to succeed.

“He can just make all the throws,” Guenther said. “He gets them in and out of runs and passes. He can move around the pocket real well and make all the throws from different platforms. It’s fun going against guys like this because you know he’s one of the best to do it. These are the kind of challenges you look forward to.”

Raiders quarterback Derek Carr has sought advice from Rodgers, a Northern California native, and considers him a friend. He called Rodgers a “magician” with the ball.

“He just gets the ball out of his hands so quick, and he does such a good job buying time both inside and outside the pocket to extend plays,” Carr said. “What I’ve always noticed about him is the quick release. When windows are open in the NFL, you’ve got to get it out of your hand. The ball has got to be there, whether it’s 3 yards or 30 yards. The ball has to get out on time, and he’s always done that consistently in every game he’s played. He’s one of the best to ever play. I’m a huge fan of his.

Rodgers isn’t having his best statistical season under first-year coach Matt LaFleur, but the Packers are 5-1 and leading the NFC North. The veteran quarterback and rookie coach are finding ways to win despite a rash of injuries in the receiving corps, most notably to star wideout Davante Adams.

LaFleur said while he takes pride in designing and calling plays to put his players in the best position to succeed, he knows opponents also have to prepare for what Rodgers not only can do at the line of scrimmage but also after the ball is snapped and the first look isn’t there.

“We’re fortunate that we have a guy that’s capable of creating off schedule and turning a play that might not be good versus a particular look and turn it into something for us,” LaFleur said on a conference call. “So it’s harder to defend against the off schedule, and again we’re fortunate — he’s been one of the best at it for his entire career.”