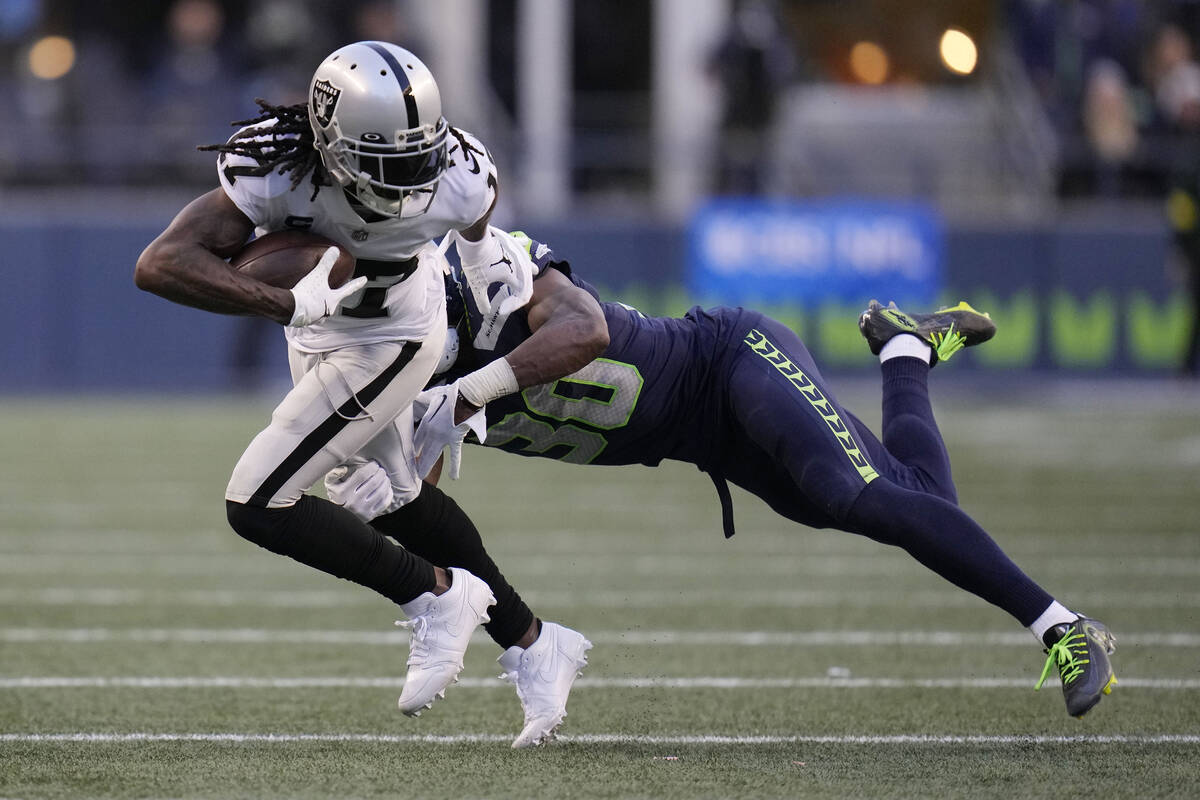 Las Vegas Raiders wide receiver Davante Adams runs after a catch against the Seattle Seahawks during the second half of an NFL football game Sunday, Nov. 27, 2022, in Seattle. (AP Photo/Gregory Bull) 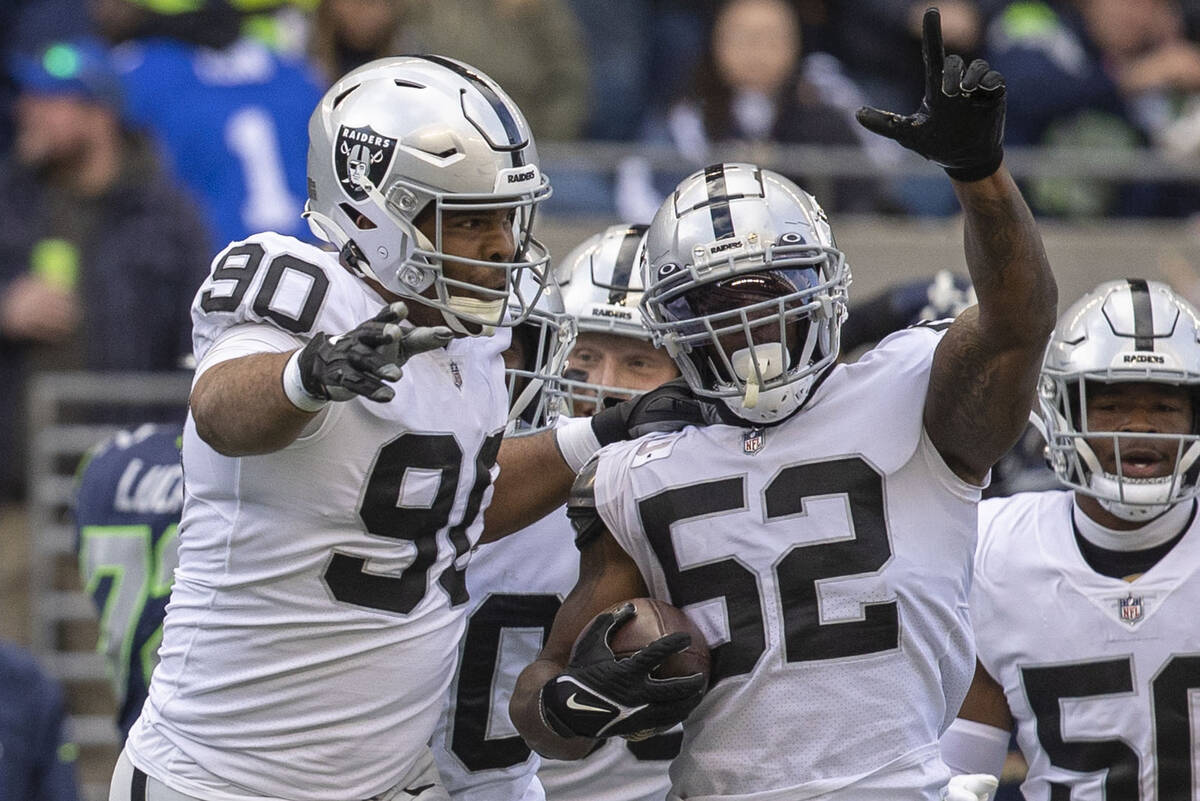 Raiders linebacker Denzel Perryman (52) celebrates his interception with defensive tackle Jerry Tillery (90) during the first half of an NFL game against the Seattle Seahawks at Lumen Field on Sunday, Nov. 27, 2022, in Seattle. (Heidi Fang/Las Vegas Review-Journal) @HeidiFang 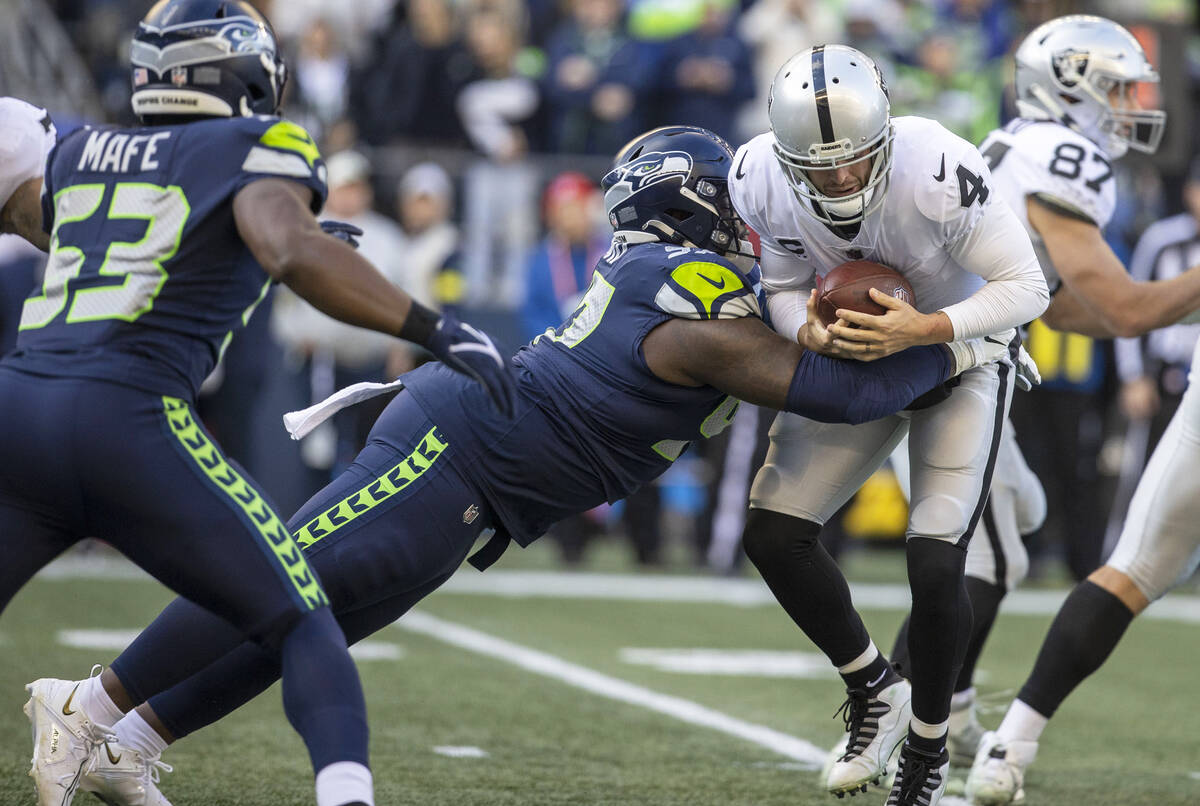 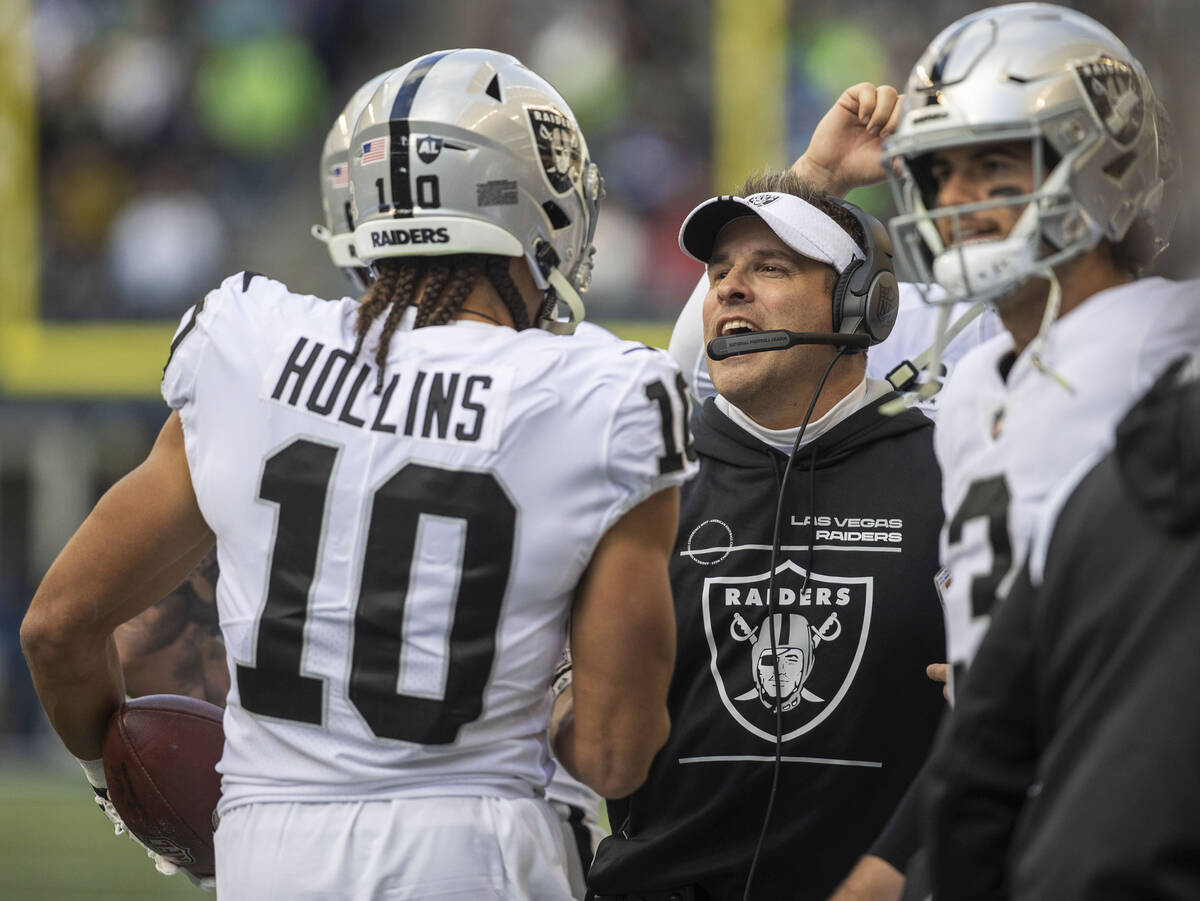 Raiders head coach Josh McDaniels congratulates Mack Hollins (10) on his touchdown during the first half of an NFL game against the Seattle Seahawks at Lumen Field on Sunday, Nov. 27, 2022, in Seattle, Wash.. (Heidi Fang/Las Vegas Review-Journal) @HeidiFang 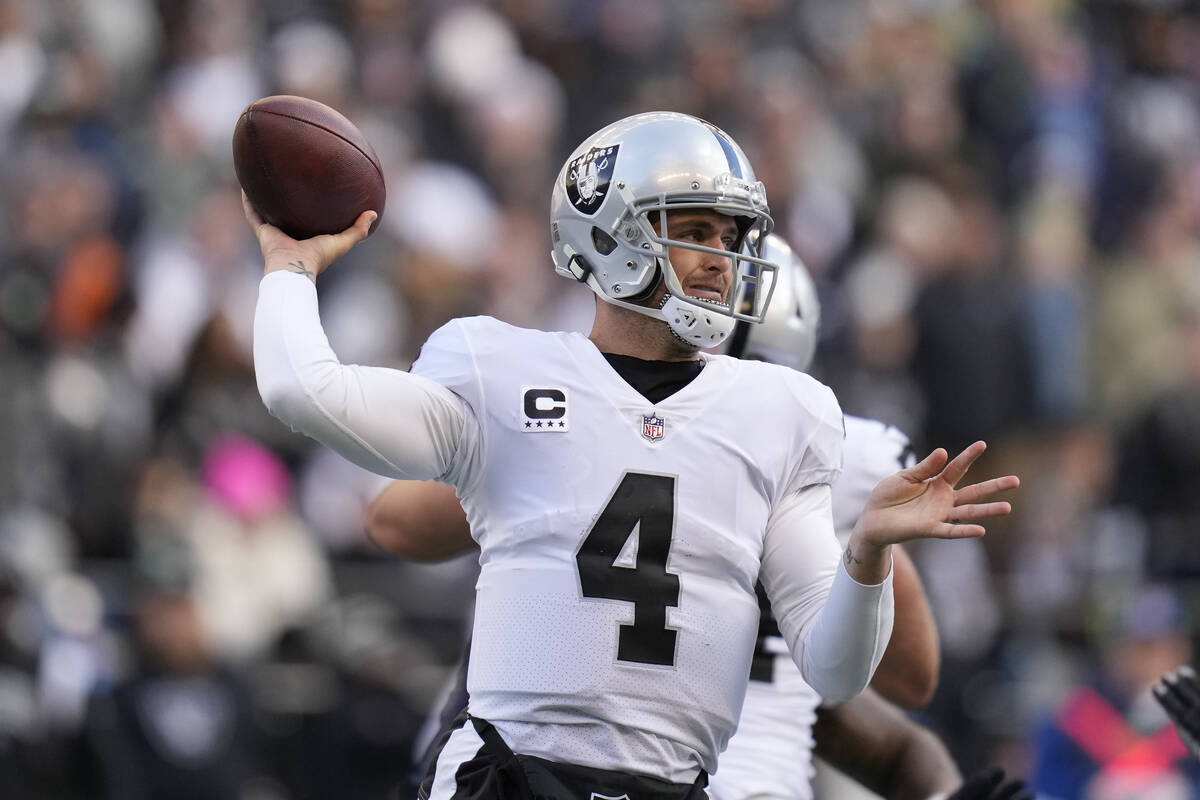 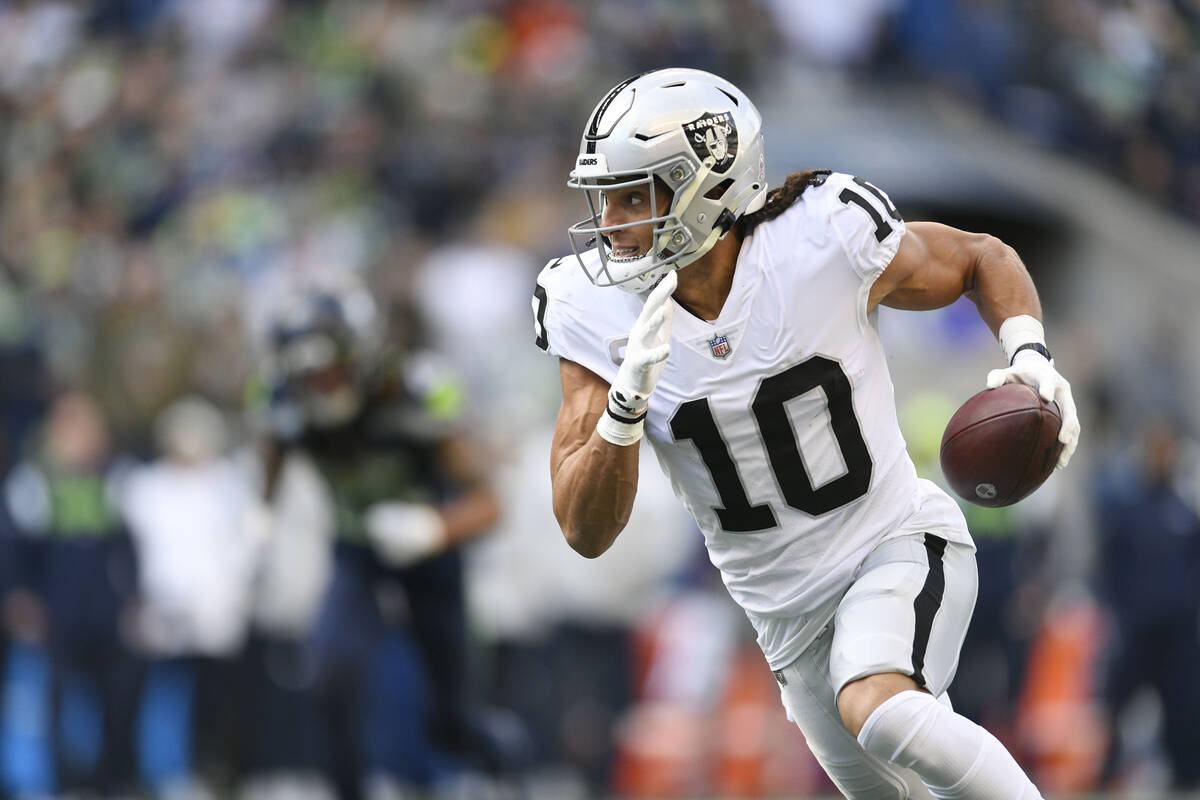 Las Vegas Raiders wide receiver Mack Hollins runs for a touchdown during the first half of an NFL football game against the Las Vegas Raiders Sunday, Nov. 27, 2022, in Seattle. (AP Photo/Caean Couto)

How the Raiders performed in a 40-34 overtime victory over the Seahawks on Sunday at Lumen Field in Seattle:

Derek Carr threw two first-quarter interceptions, but the offense racked up 576 total yards for the game. The quarterback finished 25 of 36 for 295 yards and three touchdowns, and running back Josh Jacobs had a career day. Jacobs set franchise records for rushing yards (229) and all-purpose yards (303). He is just the fourth player in the Super Bowl era to have 300-plus scrimmage yards and two touchdowns in a game. His rushing yards broke the record of Napoleon Kaufman’s 227 against the Broncos in 1997. Davante Adams led Raiders receivers with seven catches for 74 yards, and tight end Foster Moreau (three for 33) had the game-tying touchdown catch with 1:54 remaining.

It got the stop needed in overtime, returning the ball to an offense that then won the game on an 86-yard scamper by Jacobs. But the Seahawks moved the ball, with quarterback Geno Smith throwing for 328 yards and two scores. The Raiders had three sacks — 1½ from Maxx Crosby — and forced turnovers via an interception from Denzel Perryman and a fumble recovery via Chandler Jones. Perryman led the way with nine tackles (two for loss) and his pick. Duron Harmon added seven tackles from his safety spot, and Crosby had six quarterback hits.

Keelan Cole nearly gave away the game when he muffed a punt inside the Raiders’ 10-yard line with 40 seconds remaining. But he recovered the ball, and the Raiders ran out the clock before entering into overtime. It has become common to believe Daniel Carlson will make every field-goal attempt, even from 56 yards in overtime, but it was wide right. He was good from 36 and 25 yards.

There were questionable calls on fourth downs in the second half — running Jacobs wide with inches to go from your 48 with less than nine minutes left? — but the Raiders didn’t fold in a one-score game for the second straight week. Josh McDaniels and his staff deserve credit for such. They just kept playing.