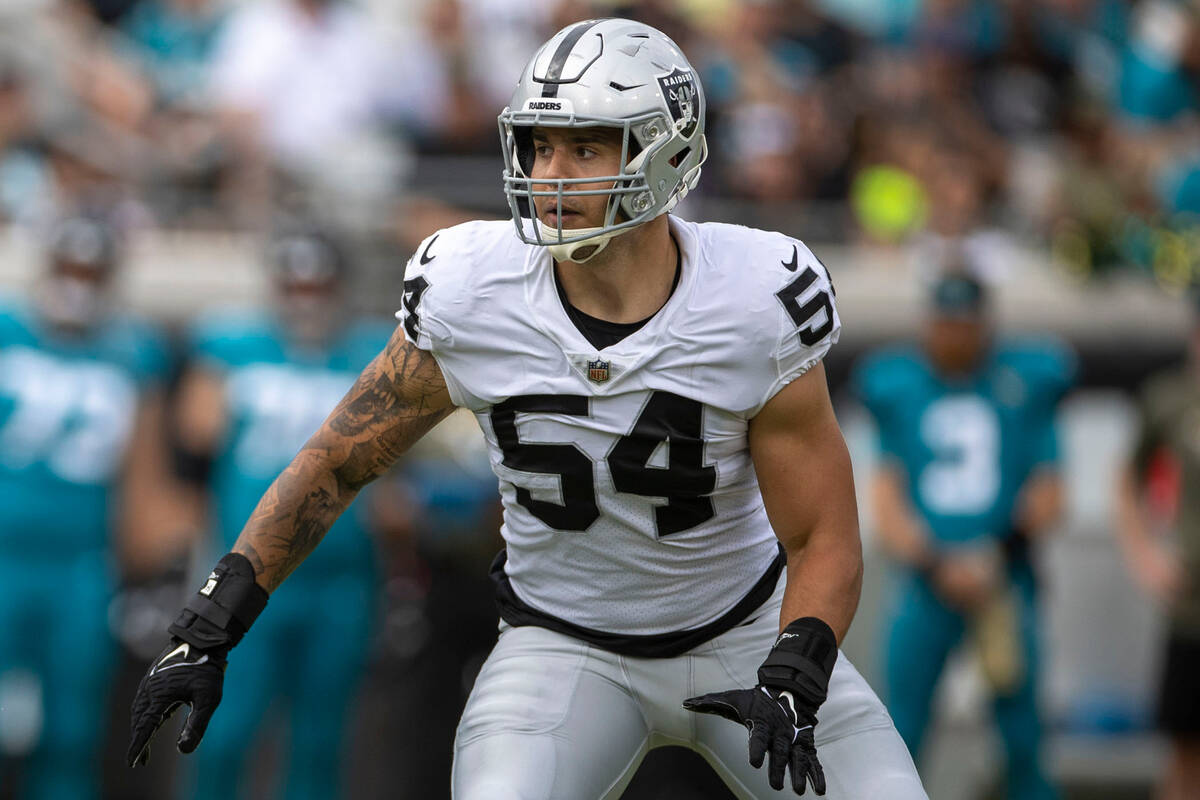 Raiders linebacker Blake Martinez (54) defends against the Jacksonville Jaguars during the first half of an NFL game at TIAA Bank Field on Sunday, Nov. 6, 2022, in Jacksonville, Fla. (Heidi Fang/Las Vegas Review-Journal) @HeidiFang

Raiders linebacker Blake Martinez has retired from the NFL at age 28, the team announced Thursday on social media.

Martinez joined the team in October and made 20 tackles in four games, including two starts.

He is coming off by far his most productive game with the Raiders, playing 91 percent of the defensive snaps and recording 11 tackles in Sunday’s loss to the Jaguars.

“I’m announcing my retirement from the game of football!” Martinez posted on Instagram. “I had an amazing journey with some incredible franchises and made lifelong friendships. I have chosen to step away from this career at this time to focus on my family and future passions! I am excited for this new journey and appreciate all the fans and organizations that have supported me throughout the years.”

Martinez spent his first four seasons with the Packers, then played for the Giants the past two years.

The former Stanford standout was a fourth-round pick of the Packers in 2016 and tied for the league lead in tackles with 144 in 2017.

Ragland and Martinez were teammates with the Giants last year under defensive coordinator Patrick Graham, and an injury to Martinez opened the door for Ragland to see significant playing time. This year, it’s the retirement of Martinez that paved the way for Ragland to get back in the league.

“Shoutout to Blake, he had a hell of a career,” Ragland said. “If he felt like it was time for him to go, he did what was right for him and his family. I’m excited for him, and it gave me the chance to come back and play the game I love. So for me, I can say I’m happy. And for Blake, I say congratulations on a hell of a career and go be a dad.”

Bolton, 26, called his mom as soon as he heard the news he would be promoted from the practice squad to the active roster.

“She was excited,” Bolton said. “She knows what this means to me.”

The Oklahoma alum was an undrafted rookie with the Packers in 2019 and has done stints on the practice squad of six teams. He did play in five games with the Lions last year and one earlier this year with the Raiders when he was elevated, but Bolton isn’t about to take this opportunity for granted.

“It means a lot,” he said. “I feel like I’ve put a lot of work into this for years at a time, and it doesn’t always come out the way I want it to. I’m just happy and grateful for this opportunity and ready to keep working.”

Bolton said general manager Dave Ziegler pulled him aside to break the news and tell him to keep working the way he has been to keep the spot now that he has it.

As happy as Bolton was with the promotion, he’s not going to spend much time celebrating.

“My family has been waiting on this news for a long time but at the end of the day, it’s not a permanent spot,” Bolton said. “If I go out there Sunday and lay an egg then I probably won’t be here after that. So I’m just going to trust my preparation and the process that got me to this point and try to add to that.”

The Raiders did get some good news on the injury front, as linebacker Denzel Perryman was able to practice in full Thursday despite rib and hip injuries.

Perryman did not participate Wednesday. Linebacker Darien Butler (hip) was able to get in a second consecutive limited practice Thursday.

Wide receiver Keelan Cole also was upgraded to full participation Thursday with a knee injury that limited him Wednesday.