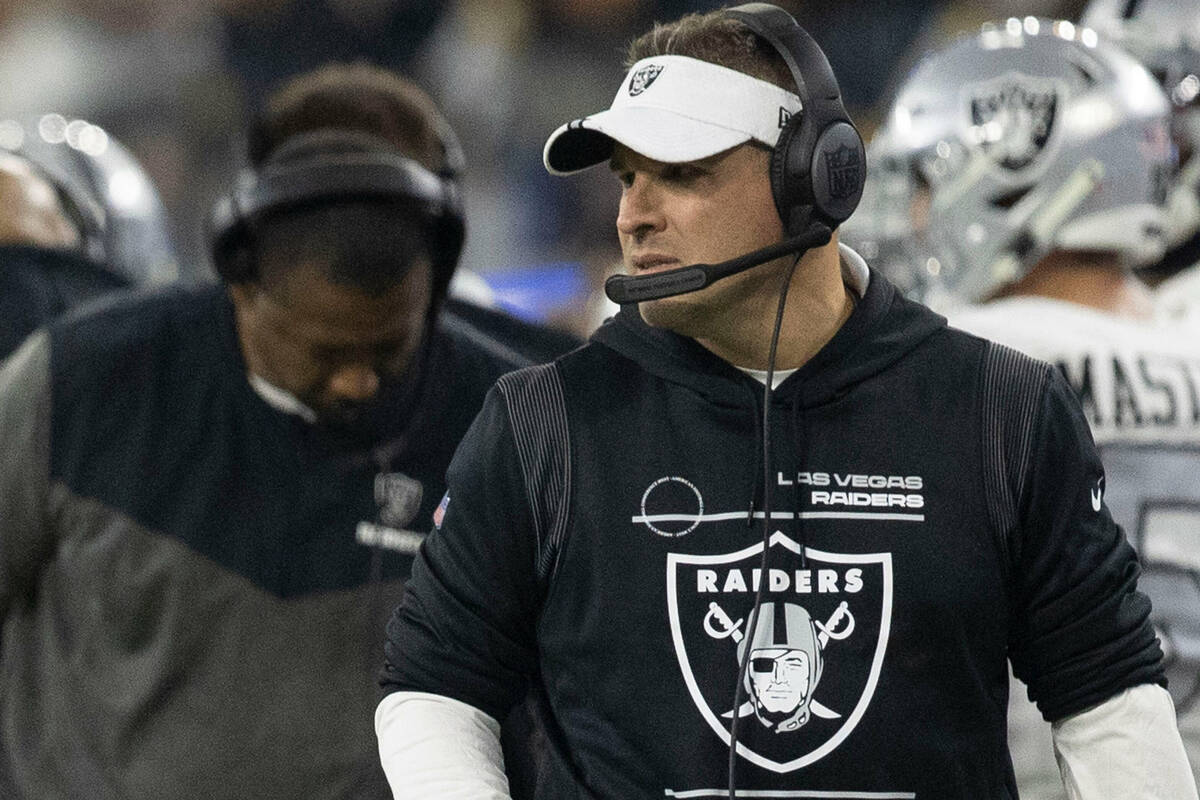 Raiders head coach Josh McDaniels looks on from the sideline during the second half of an NFL game against the Los Angeles Rams at SoFi Stadium on Thursday, Dec. 8, 2022, in Inglewood, Calif. (Heidi Fang/Las Vegas Review-Journal) @HeidiFang

One of the things Raiders coach Josh McDaniels has preached to his team during a season of wild emotional swings is to avoid getting too high after a win and too low after a loss.

He has often said he thinks his team has done a good job of putting that philosophy into practice. But the sense of gloom in the locker room after Thursday night’s latest heartbreaking road loss to the Rams suggested something different.

“We were in position to have a chance to win, that’s the reality,” McDaniels said Friday reflecting on a post-game locker room filled with stunned disbelief mixed with hung heads and sporadic tears. “However good or bad we had played up to that point, we had played well enough to earn that right to be in there and try to close it out and get to 6-7 … So yeah, the disappointment and the frustration of not being able to close it is palpable, easy to see.”

But McDaniels said that doesn’t mean the Raiders have a dysfunctional locker room.

”It doesn’t mean that anybody is pointing fingers or blaming others. The reality is, we let an opportunity go, and I’m responsible for that. So, if they want to point a finger, point it at me.”

Far too often this season, McDaniels and the Raiders have been left searching for answers after inexplicable heartbreaking losses. The frequency of them hasn’t made them any easier to deal with at this point of the season.

“None of them feel good,” McDaniels said. “It’s a gut punch. And, God, we’ve had a few of them where we got a chance and just for whatever reason don’t end up getting it closed out. … I think we’ve handled some adversity this year with a good attitude and the right approach, and that’s what we all need to do.”

The shocking loss that saw the Raiders give up two long touchdown drives late in the fourth quarter to a quarterback who had been with his team just two days was all the more surprising because it had appeared the Raiders had turned the corner over the last few weeks.

They had won three straight games and were minutes away from being squarely back in the playoff picture entering the home stretch of the season.

Now they have left themselves little to play for and absolutely zero margin for error.

“We haven’t really talked about (playoff probabilities) to this point (after wins), so I’m not going to start talking about it now,” McDaniels said. “We don’t have any control over that and that’s the truth.”

One of the ways they can improve is learning to put teams away when they have a lead. They were 20-2 over the last 10 years in games they led by double-digits at halftime. Including Thursday night, they are now 0-4 in such situations this season.

While the Raiders attempted just seven passes after halftime, McDaniels doesn’t think his offense took their foot off the gas pedal.

He said quarterback Derek Carr was forced to scramble on several additional called passing plays, which would have increased that total. McDaniels believes the issue is more about attention to detail.

“I don’t know if it’s a killer instinct as much as it’s just continuing to do your job,” he said. “I think it’s just the reality is you’ve got to do your job right for 60 minutes, and if you don’t, then teams in this league take advantage of mistakes that you make.”

The most glaring of those was the egregious unsportsmanlike conduct penalty on defensive tackle Jerry Tillery on the final drive when he knocked the ball out of the hands of Rams quarterback Baker Mayfield to stop the clock and give them a first down after a sack.

“The message today is, ‘Let’s just get back to the line of scrimmage and play the next down,’” McDaniels said. “There’s nothing good that happens after the whistle when you’re doing things like that.”

The Raiders have plenty of time to reflect on the loss as they don’t take the field again until a home game against the Patriots on Dec. 18.