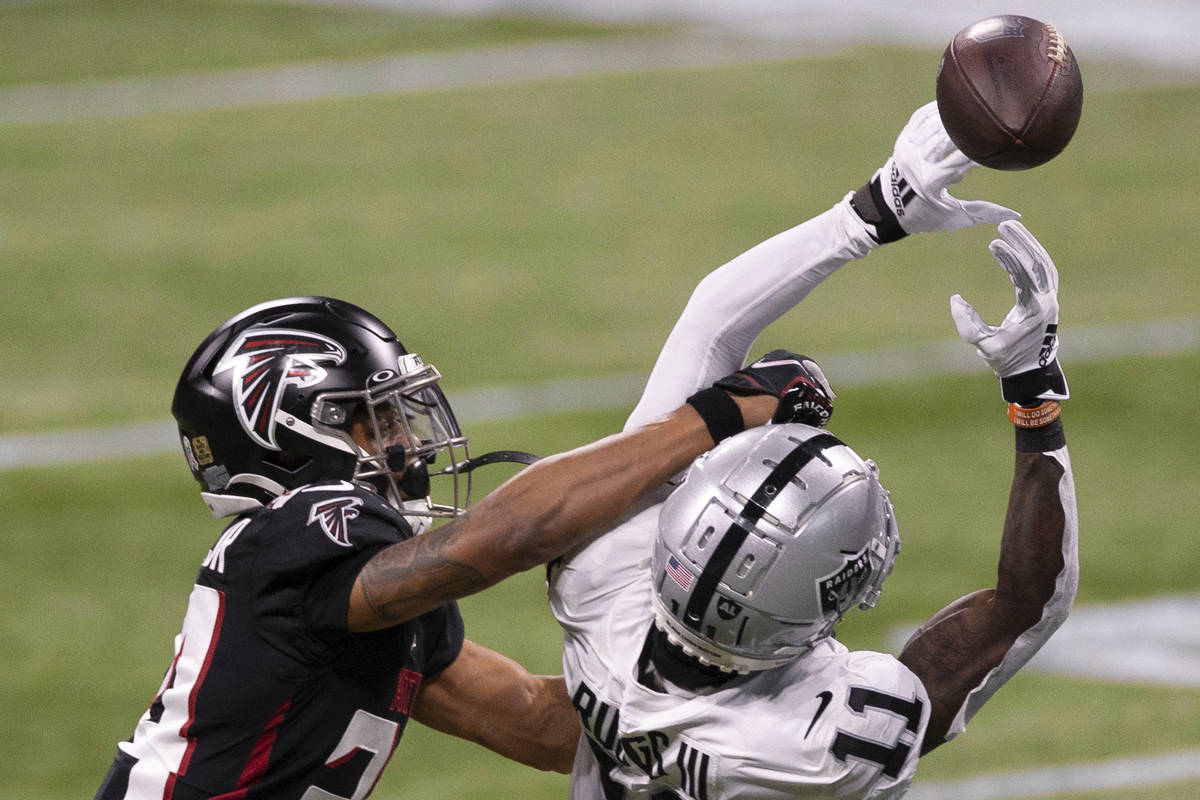 Three takeaways from the Raiders’ 43-6 loss at the Atlanta Falcons on Sunday.

Even against NFL teams with losing records, making a series of major errors is an invitation to defeat.

The Raiders made more than their share against the Falcons, who were 3-7 entering the game.

Just in the first half alone:

— The Raiders went for a fourth-and-1, but called for a deep pitch to Josh Jacobs rather than a faster-developing play. He was stuffed, and the Falcons took advantage to convert the turnover on downs into a field goal.

— The Raiders converted a fourth-and-3 with a 36-yard pass to Henry Ruggs to Atlanta’s 3-yard line for a prime scoring opportunity. But holding and hands-to-the-face penalties pushed them back. An apparent fumble by Jacobs was overturned on a questionable replay decision, and the Raiders salvaged a field goal but nothing more.

— Atlanta was forced to settle for another field goal, but Dallin Leavitt was called for roughing the kicker on the errant kick. The Falcons took advantage to score a touchdown and take a 13-3 lead.

— Another strip sack of Carr — right tackle Brandon Parker was beaten badly — halted a promising Raiders drive in the final two minutes, giving the Falcons another chance to add to their lead. And they did with another field goal to head into halftime ahead 16-3.

2. No time to wallow

No doubt many Raiders fans are having nightmares about a potential repeat of what happened last season when the Raiders also were 6-4 only to lose five of their final six games to again miss the playoffs.

That slide began with a 34-3 loss at the New York Jets, who the Raiders visit next Sunday. A loss to the winless Jets this time, and the Raiders would go from having legitimate playoff hopes to being inundated with questions about why their season is slipping away.

They still have a shot at the playoffs, especially with a final schedule that is favorable. But if the Raiders repeat performances like this one against the Falcons, they once more won’t make the playoffs.

Their challenge now is to quickly forget about the Falcons game and focus on the task ahead. That means being on to New York.

This was far from Jacobs’ finest day — rushing for 27 yards on just seven carries — but there is no doubting his value to the Raiders, especially as it relates to their playoff hopes.

He left the game late in the third quarter after suffering an apparent ankle injury.

The Raiders need to hope this injury won’t linger. It’s difficult to imagine them going far without a healthy and effective Jacobs.

Asking Carr to carry the offense isn’t the path to the postseason.

That could put more of an onus on Devontae Booker, who thought he should have been more of a feature back with the Denver Broncos. He might now get that chance with the Raiders.