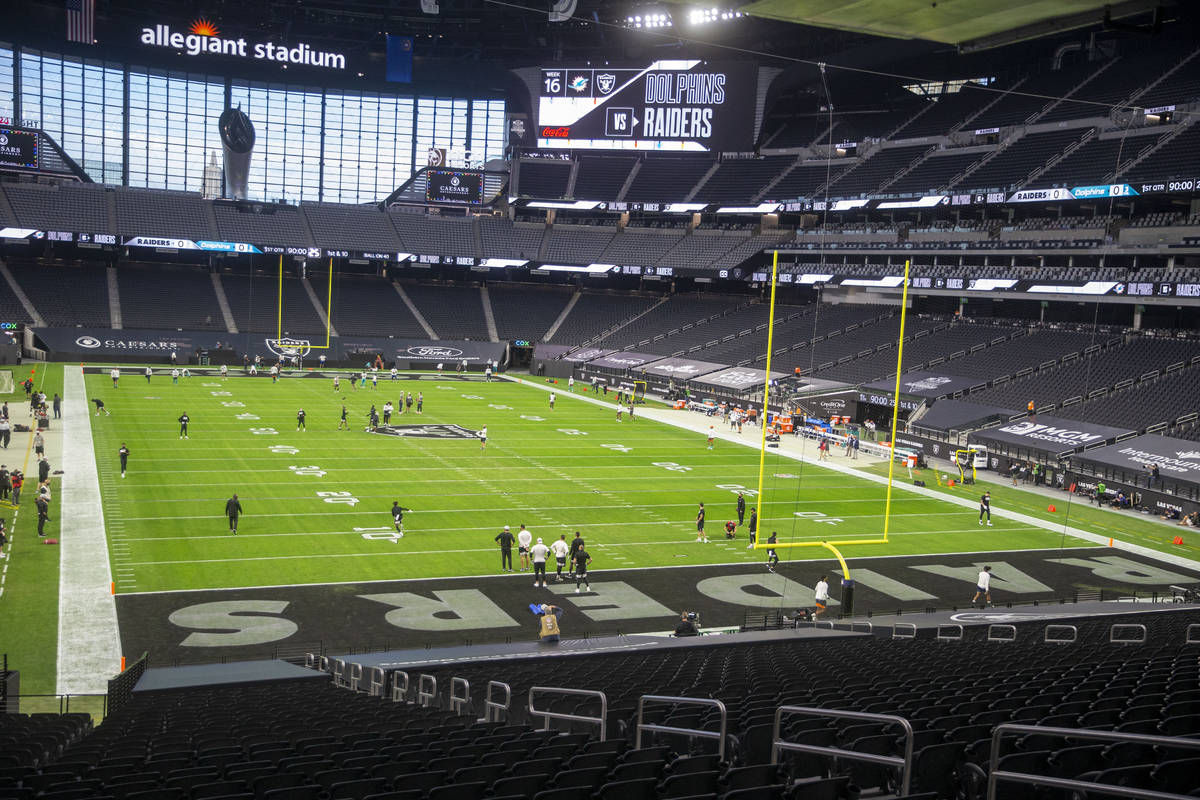 Teams warm up in an empty stadium before an NFL football game between the Raiders and the Miami Dolphins on Saturday, Dec. 26, 2020, at Allegiant Stadium in Las Vegas. (Heidi Fang/Las Vegas Review-Journal) @Heidi Fang

Ever since the Raiders made plans to relocate to Las Vegas, the team’s value has been soaring like they hit the MegaBucks, hundreds of times over.

In the past five years, their value has increased 117 percent to $3.1 billion, good enough to be ranked the 29th most valuable sports franchise in the world, according to Forbes, which released its annual rankings Friday.

The Raiders are among three U.S. sports franchises to see their values at least double in the past five years, with the Los Angeles Rams (up 176 percent) and the NBA’s Golden State Warriors (147 percent) being the other two.

One thing those teams all had in common: new facilities constructed in that span.

The Raiders moved into their $2 billion Allegiant Stadium last season, with the Rams beginning to play in SoFi Stadium — their new $4 billion home in Inglewood, California — last year as well. The Warriors’ $1.4 billion Chase Center opened its doors in 2019 in San Francisco.

“The Raiders are probably, in terms of the NFL, one of the handful of teams that are national brands,” Ozanian told the Review-Journal in September. “I think it’s (Raiders in Las Vegas) going to be very successful … Their season ticket and PSL demand has been even stronger than in Los Angeles.”

Despite that, the Rams value was higher than the Silver and Black’s, coming in at $4 billion, good enough to be tied with Manchester City soccer for 13th on the list of sports franchises.

The NFL’s Dallas Cowboys topped this year’s list with a value of $5.7 billion with MLB’s New York Yankees at $5.35 billion, the NBA’s New York Knicks third at $5 billion. Soccer clubs Barcelona ($4.76 billion) and Real Madrid ($4.75 billion) were next.

Thirty-two of the 50 teams on the list had a value of $3 billion or more, with the Cleveland Browns having the lowest value on the list at $2.35 billion.