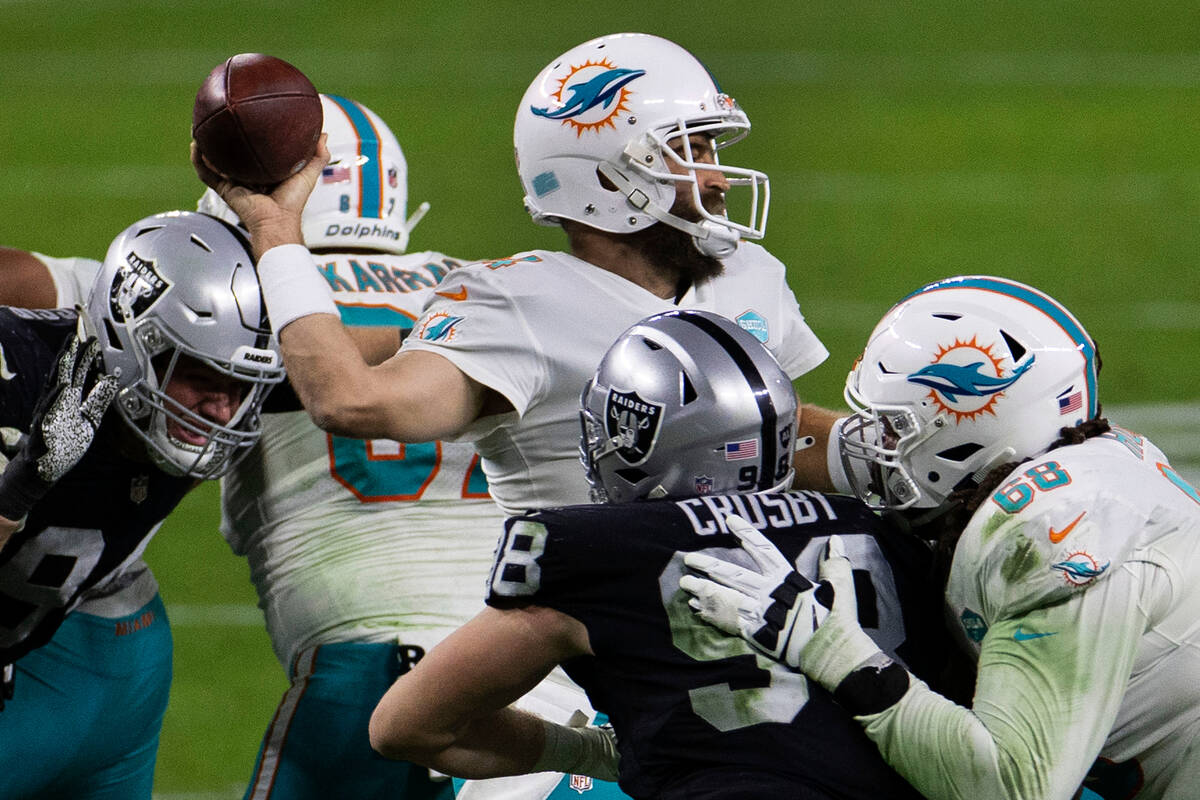 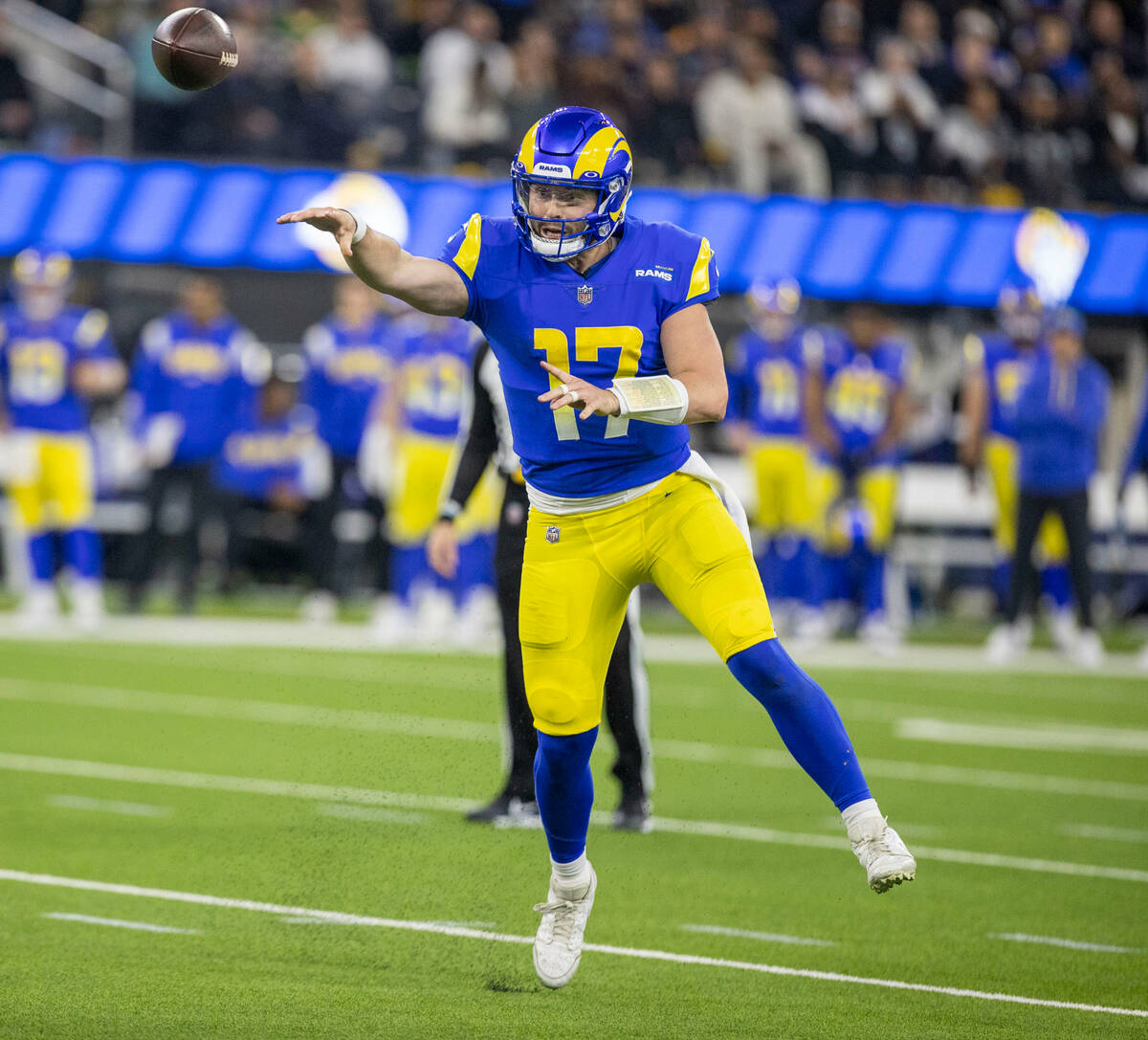 Los Angeles Rams quarterback Baker Mayfield (17) throws during the second half of an NFL game against the Raiders at SoFi Stadium on Thursday, Dec. 8, 2022, in Inglewood, Calif. (Heidi Fang/Las Vegas Review-Journal) @HeidiFang 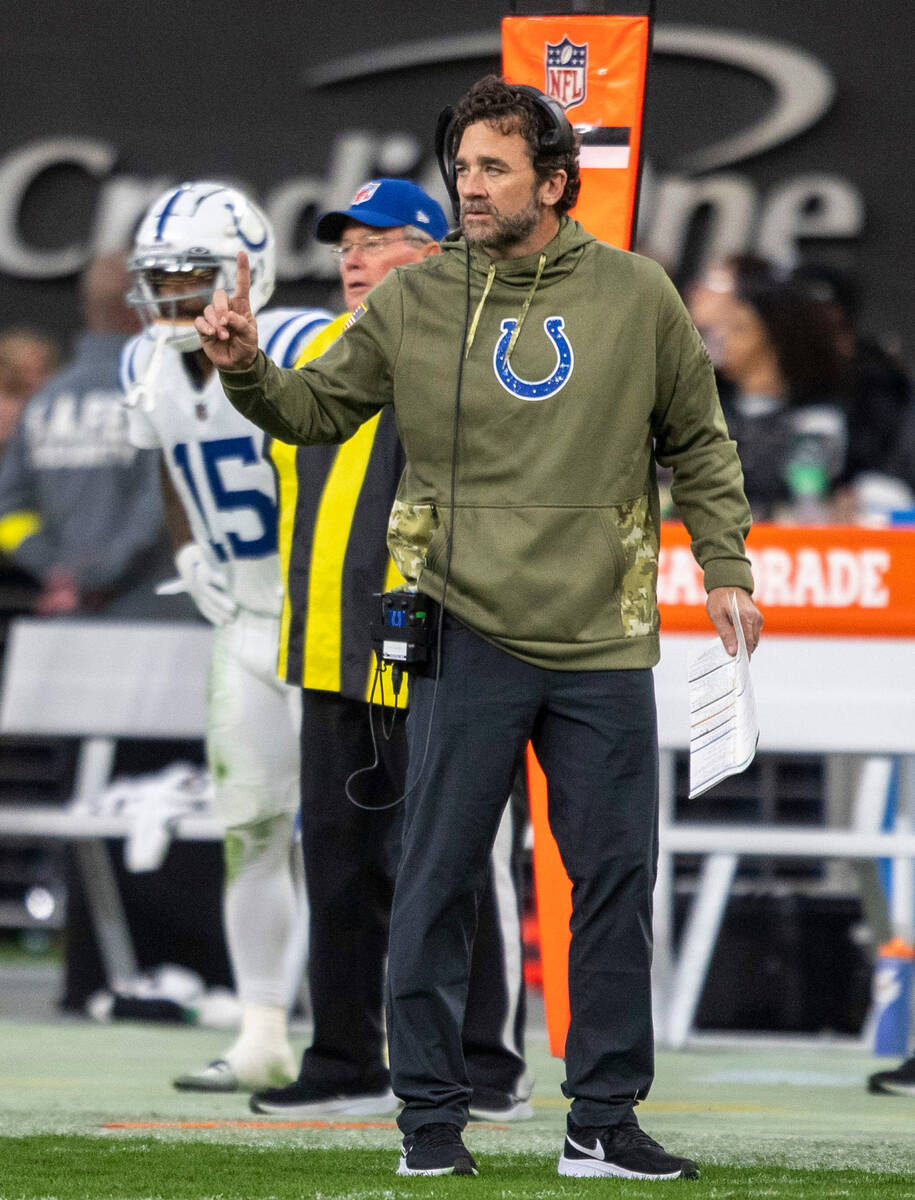 Indianapolis Colts head coach Jeff Saturday communicates to the team from the sideline during the second half of an NFL game against the Raiders at Allegiant Stadium on Sunday, Nov. 13, 2022, in Las Vegas. (Heidi Fang/Las Vegas Review-Journal) @HeidiFang 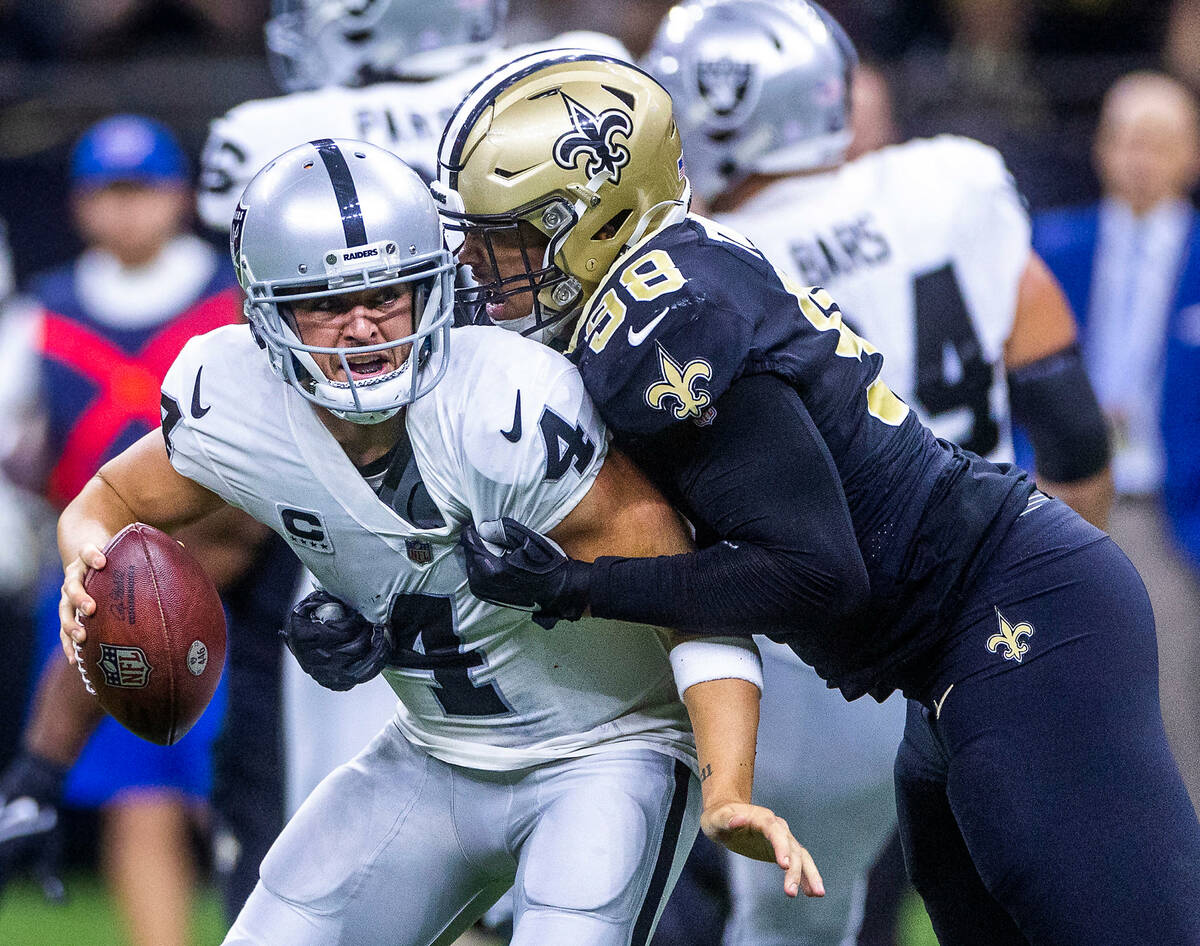 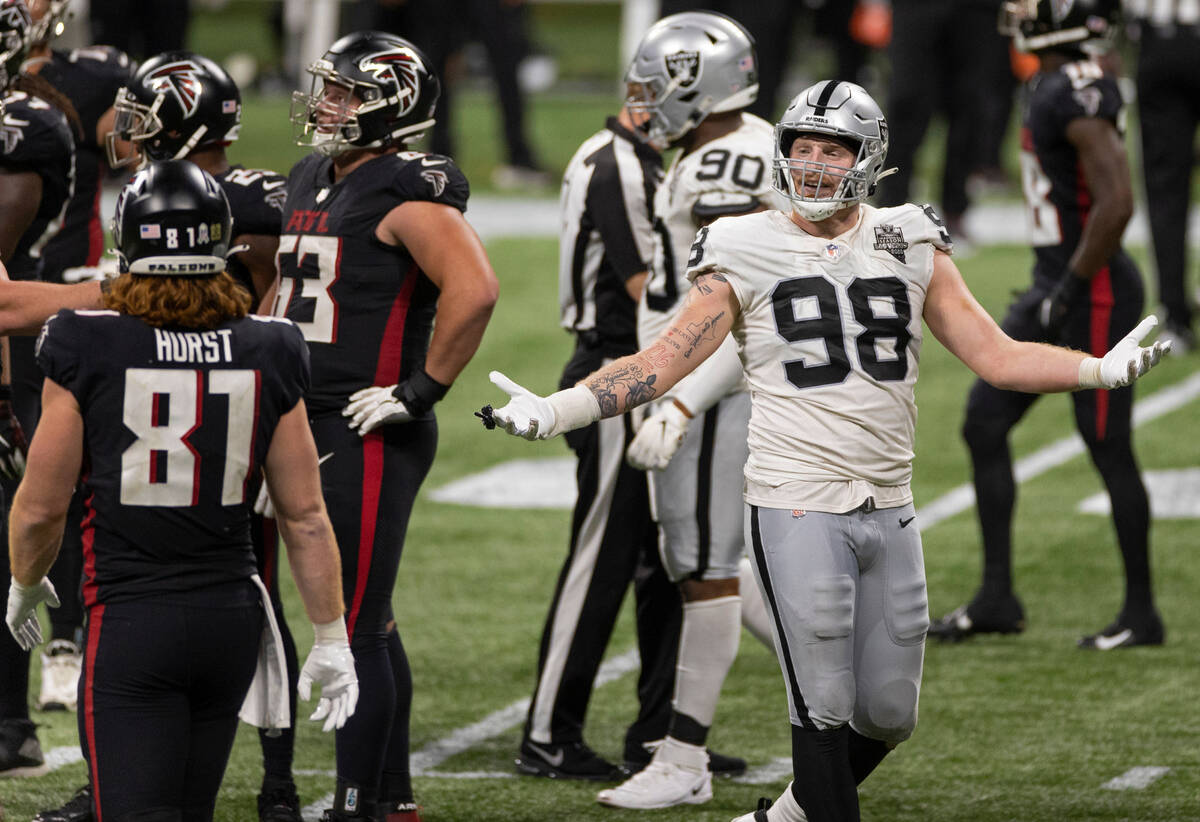 Las Vegas Raiders defensive end Maxx Crosby (98) gestures towards the bench in frustration in the third quarter during an NFL football game against the Atlanta Falcons on Sunday, Nov. 29, 2020, at Mercedes-Benz Stadium, in Atlanta, Ga. (Benjamin Hager/Las Vegas Review-Journal) @benjaminhphoto

The process of identifying the most excruciating, heartbreaking or even embarrassing loss of the Raiders’ Las Vegas era is not an easy one.

There have been inexplicable blowouts, wild comebacks and baffling meltdowns. And that’s just in the past month.

Thursday’s loss to a Rams team that trailed by 13 points with four minutes remaining and with a quarterback who had been on the roster for 48 hours would seem an obvious choice for the worst loss since the team arrived from Oakland.

Yet there is so much competition. The Raiders have led by at least three scores and ended up losing the game on three occasions this season, and only one of those games made the list.

There are that many options.

Here is an attempt to rank the franchise’s five worst losses since it moved to Las Vegas in 2020:

There was no huge comeback or late-game collapse. No bad game-changing turnover or controversial call.

This was just an old-fashioned stinker.

The Raiders went to New Orleans on Halloween weekend and appeared to be a bunch of amateurs dressed up in the costumes of professional football players.

A performance that was all trick and no treat came at a time when the Raiders were coming off a solid victory and looking to build momentum going into a stretch of winnable games.

Instead, the offense didn’t cross midfield until less than two minutes remained in the game.

An Atlanta team that went on to a 4-12 record and the fourth-pick in the 2021 NFL draft dismantled the Raiders from start to finish.

A Falcons team that had already fired its coach forced five turnovers, including a 67-yard interception return for a touchdown.

Derek Carr committed four of them on a day when then-coach Jon Gruden apologized to the fan base for the team’s performance.

Indianapolis has a talented roster and one of the NFL’s best running backs.

They have playmakers on defense and were a projected playoff team. There was nothing particularly out of the ordinary about the loss.

After the Colts went ahead on a touchdown with 5:14 to play, the Raiders drove the length of the field only to come up short on a fourth-down play with 52 seconds left.

It was another missed opportunity for a team that had possession of the ball with a chance to win late, as it had several times already in the season, but that wasn’t the reason this loss made the list.

The game will be remembered as the debut of interim coach Jeff Saturday, a former Colts player with no coaching experience who was hired away from his job as a TV analyst to take over an underachieving team in disarray.

The loss was made all the worse by the Colts going 0-3 since in a stretch of games marred by questionable strategic decisions.

The most recent loss easily could have captured the top spot.

Baker Mayfield was claimed off waivers two days earlier to quarterback a team missing players worth more than $80 million in salary. The Raiders had won three straight to get back on the fringe of playoff contention.

The Raiders led 16-3 with less than four minutes remaining only to see the Rams score touchdowns on two improbable drives sandwiched around a three-and-out by the Raiders’ offense.

Silly penalties contributed to the late meltdown, as the Raiders lost for the fourth time when leading by double digits at halftime and all but eliminated themselves from the postseason race.

Ryan Fitzpatrick led three fourth-quarter scoring drives in relief, including the game-winner that started at his 25-yard line with 19 seconds remaining to knock the Raiders out of postseason consideration.

Gruden elected to have his team run down the clock as much as possible instead of scoring a touchdown on the previous drive, even calling for running back Josh Jacobs to stop at the 1-yard line and take a knee instead of crossing the goal line.

With the Dolphins in desperation mode, Fitzpatrick heaved the ball downfield to Mack Hollins for a 34-yard gain as Arden Key yanked Fitzpatrick’s helmet completely around in the backfield. The resulting penalty moved the Dolphins into field-goal range for the game-winner by Jason Sanders.

It was followed up by a dramatic win in Denver the following week, but the loss to the Dolphins made the victory in the finale moot.