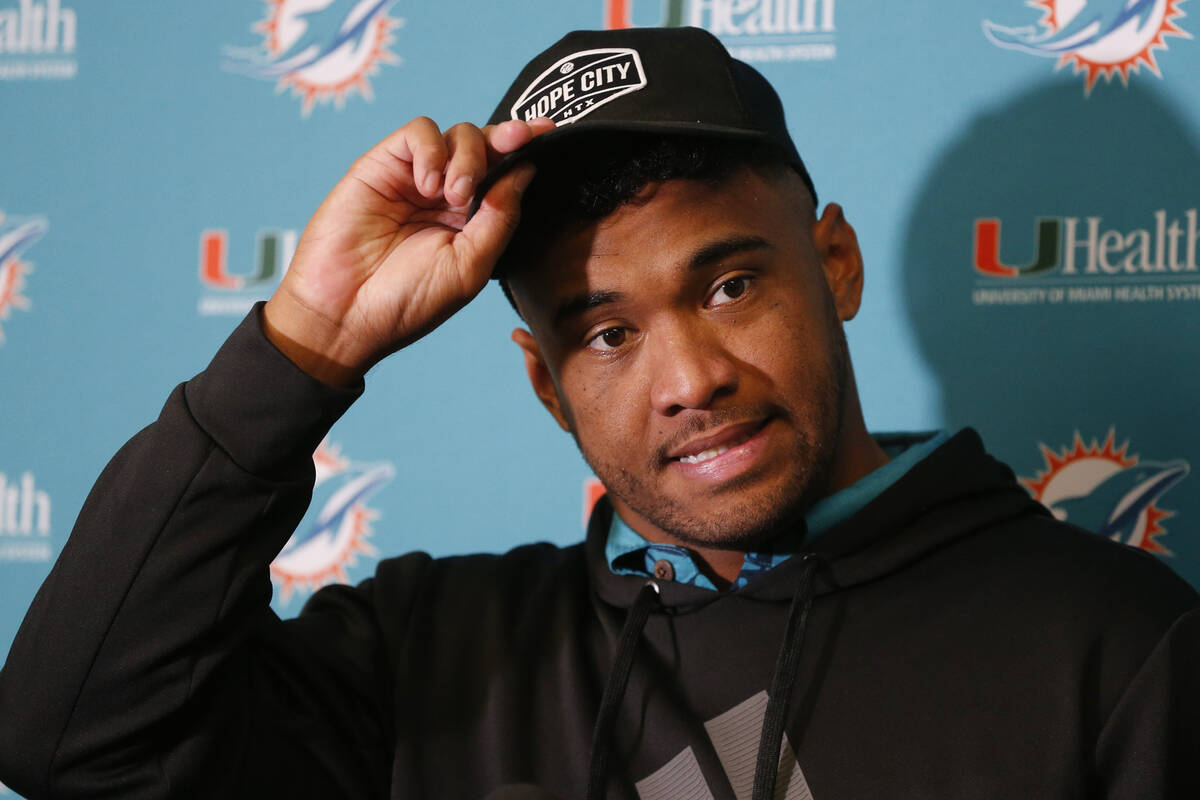 Miami Dolphins quarterback Tua Tagovailoa came to Alabama in the same recruiting class as former Raiders wide receiver Henry Ruggs and both were first-round picks in the 2020 NFL draft.

Tagovailoa was stunned to hear the news his close friend had been arrested for a DUI that resulted in the death of a Las Vegas woman early Tuesday morning.

“That was tough for me to hear, just knowing the kind of person that Henry is,” Tagovailoa said after Wednesday’s practice. “You’d never think this guy could hurt a soul, so when you see something like that – I mean, I’m still kind of in disbelief. But, obviously my heart goes out to the family that has been affected by it. But my heart also goes out to Henry as my teammate, ex-teammate.”

Ruggs is facing charges of DUI resulting in death and reckless driving.

Tagovailoa gathered himself as he struggled to find the words to represent what had to feel like a million emotions swirling in his heart.

“That’s tough,” he said. “My heart goes out to the families affected by what happened, the choices and decisions.

“My heart goes out to Henry, too. And his family. Obviously, it wasn’t the right choice or decision that he made at that time. I know he wishes he could have it back.”

Nick Saban, who coached Ruggs and Tagovailoa at Alabama, offered his thoughts and prayers to the victim of the crash and her family

“But our thoughts and prayers are also with Henry and his family,” Saban said.

Saban hopes a silver lining could come out of the tragedy.

“This is something a lot of folks can learn from, a lot of players on our team,” he said. “We say, ‘Challenge people to make good choices and decisions, do the right things.’ Because sometimes the consequences can be devastating and these consequences are going to probably be pretty devastating to Henry. We love him. We’re going to support him through it. but we also have a lot of compassion for the victims and our thoughts and prayers are with them.”

Eagles quarterback Jalen Hurts was also Ruggs’ quarterback for a time at Alabama, though he wasn’t as ready to share his thoughts on the situation.

“I give my condolences to the family of the young lady that passed away,” he said. “It’s unfortunate to see a situation like that unfold, and I’ll just kind of leave it at that. It hurts my heart for everybody involved.”

Giants wide receiver Kadarius Toney, an SEC rival of Ruggs, Hurts and Tagovailoa at Florida, will play against the Raiders this week.

He appeared to take exception to the lack of empathy in some of the posts attacking Ruggs and his behavior.

“We young,” Toney wrote. “Everybody makes mistakes. Y’all looking at the situation like ‘this or that’ kuz it ain’t y’all. Having so much to say. He knows he messed up don’t drag him for it. That’s goofy to me. Just pray for the families involved.”