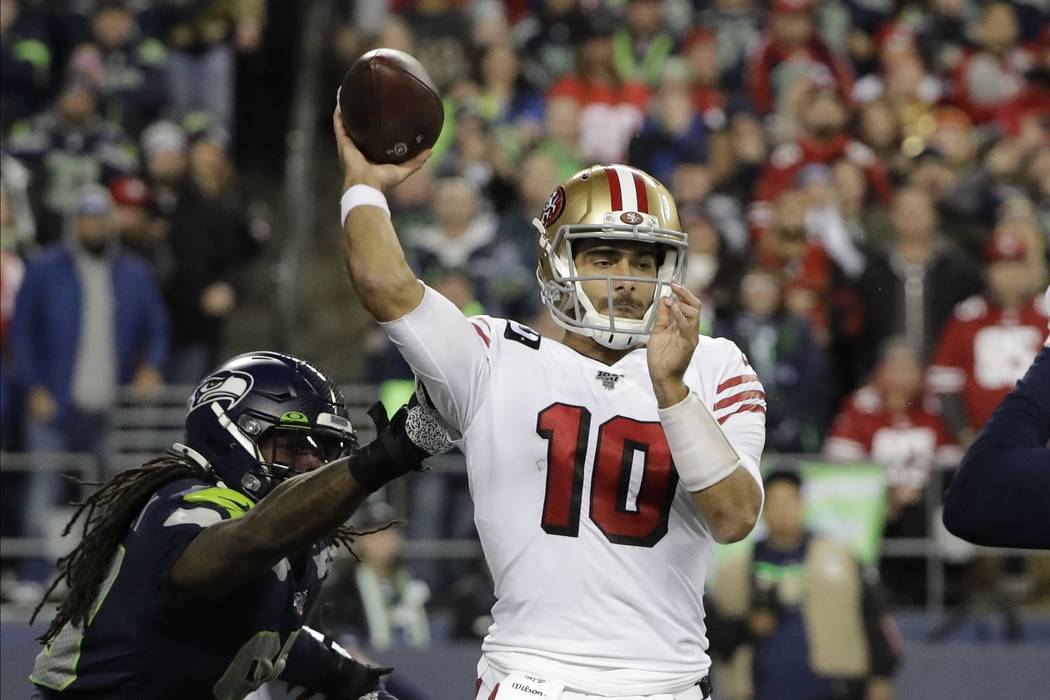 San Francisco 49ers quarterback Jimmy Garoppolo in action against the Seattle Seahawks during the second half of an NFL football game, Sunday, Dec. 29, 2019, in Seattle. (AP Photo/Ted S. Warren) 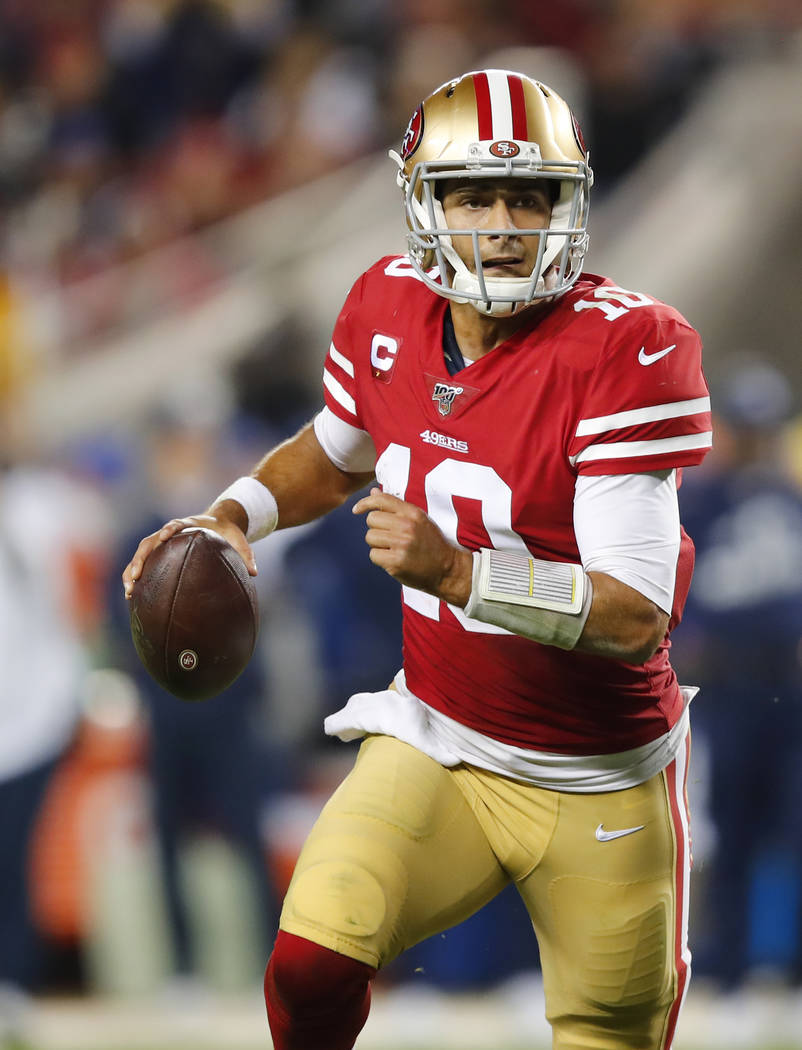 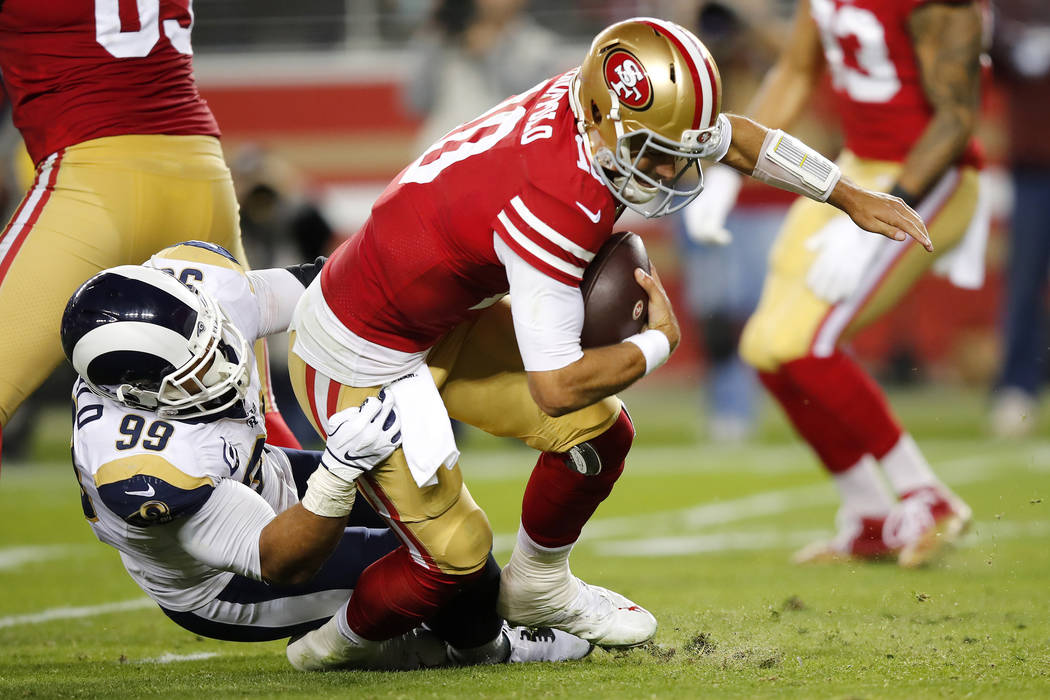 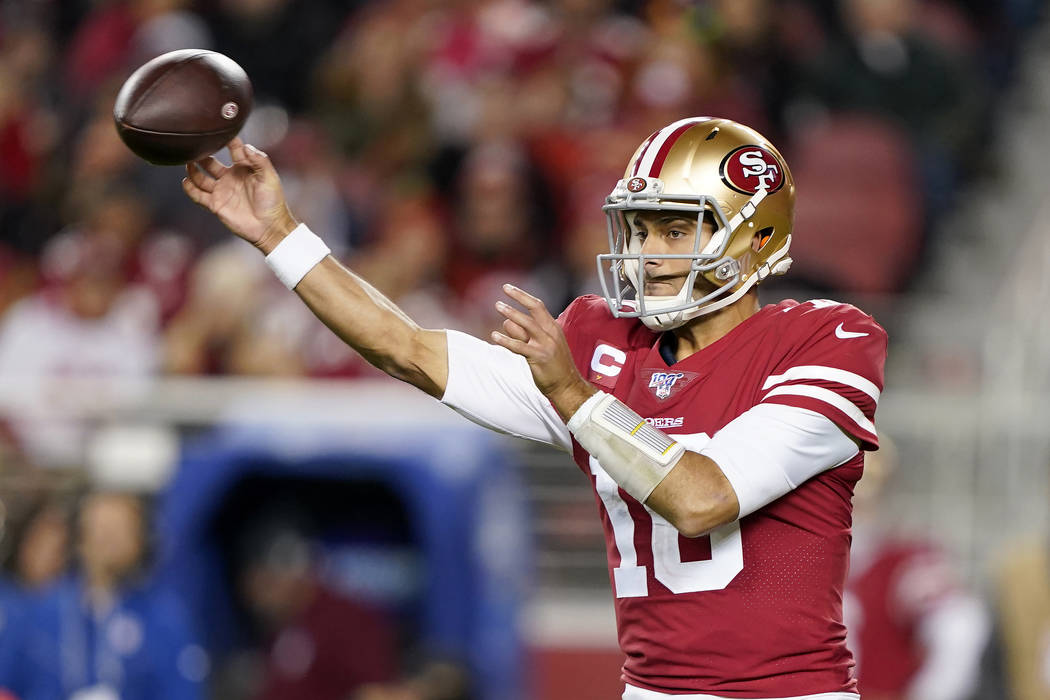 Last week belonged to NFL road teams. The Titans, Vikings and Seahawks won outright in playoff games, and the Bills forced overtime before losing to the Texans.

Don’t count on that happening again this week.

But there are tickets to be cashed on the road warriors because of some attractive spreads. VSiN’s Steve Makinen pointed out teams that are plus 3½ to plus 9½ on divisional playoff weekend are 21-11-1 against the spread in the past 33 games. All four of this weekend’s road teams are priced in that range.

For me, the Vikings are the hardest road team to back because of the schedule. After their sensational performance in New Orleans, they play on a short week against a team resting and healing for two weeks. Huge edge for the 49ers, who are planning on the return of defensive end Dee Ford and linebacker Kwon Alexander.

The unknown is quarterback Jimmy Garoppolo. He has played well, but this is his first playoff start. Remember, Lamar Jackson and Deshaun Watson lost their first playoff games last season at home. Since 2013, first-time starting quarterbacks in the playoffs are 6-17 straight up.

Check the condition of Viking receivers Adam Thielen and Stefon Diggs. Thielen cut an ankle so badly in practice that he required stitches. Diggs missed two days because of illness.

If Derrick Henry continues to terrorize defenses, Titans backers are cashing tickets. He smoked the Patriots for 182 yards rushing, allowing quarterback Ryan Tannehill to win his first playoff start despite going 8 of 15 for 72 yards.

The Ravens were upset by the Chargers in the first round a year ago, but this is a far more sophisticated offense than last season’s. Since their bye week Oct. 27, the Ravens are averaging more than 35 points a game. They defeated four playoff teams and covered every victory except for their three-point win over the 49ers.

Ravens running back Mark Ingram is nursing a calf injury, which could impact Jackson’s lethal array of option plays.

The Chiefs are the flavor of the weekend. Flashy quarterback, brainy coach and an improved defense. What’s not to like?

Well, let me take you back to Oct. 13. The Chiefs took a 17-3 lead over the Texans after the first quarter. The Texans then scored 20 consecutive points to take a 23-17 halftime lead. The Chiefs regained the lead 24-23 in the third. But Watson drove the Texans 93 yards in the fourth quarter, overcoming three penalties along the way and scoring the winning touchdown himself.

Making plays at crucial times is the key to winning games, and we watched Watson do it again last week when he rallied the Texans from a 16-0 deficit.

There is an injury concern with wide receiver Will Fuller, who didn’t play last week. The Texans need him to balance the field with DeAndre Hopkins.

I might pick the Seahawks to win outright except for the weather; 23 degrees is the kickoff forecast at Green Bay.

Seahawks quarterback Russell Wilson struggles in temperatures below 30 degrees. In three such games, he has thrown for four touchdowns and six interceptions, and his only victory came when the Vikings missed a game-winning field goal as time expired.

This game should be close because the Seahawks have perfected that art. Thirteen of their 17 games have been decided by one score, including last week’s win at Philadelphia.