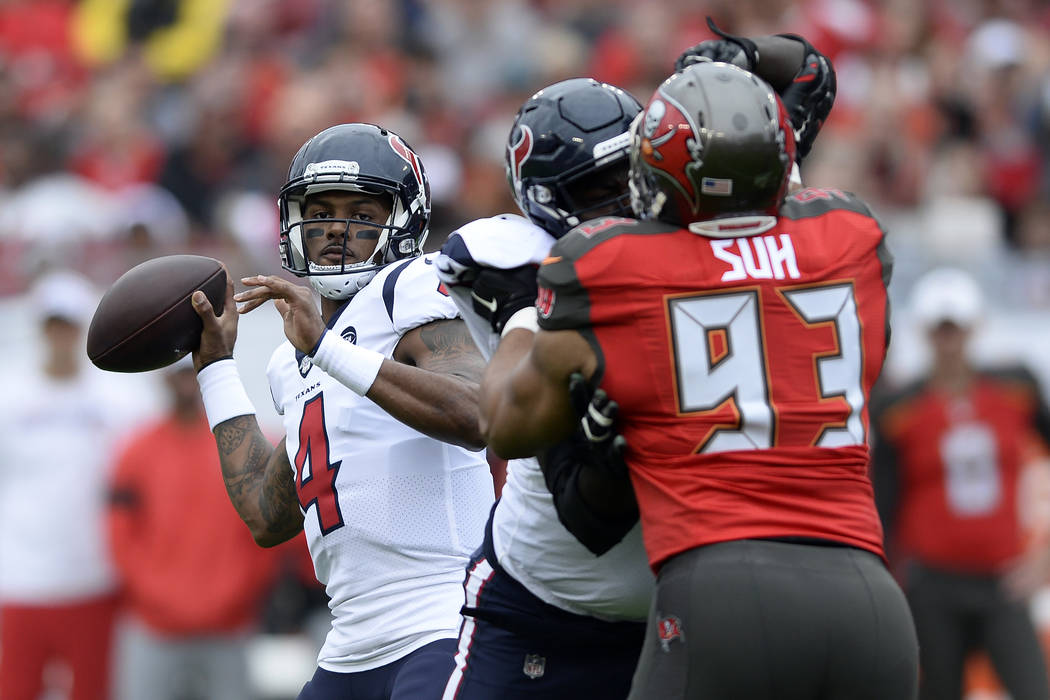 Houston Texans quarterback Deshaun Watson (4) throws a pass against the Tampa Bay Buccaneers during the first half of an NFL football game Saturday, Dec. 21, 2019, in Tampa, Fla. (AP Photo/Jason Behnken) 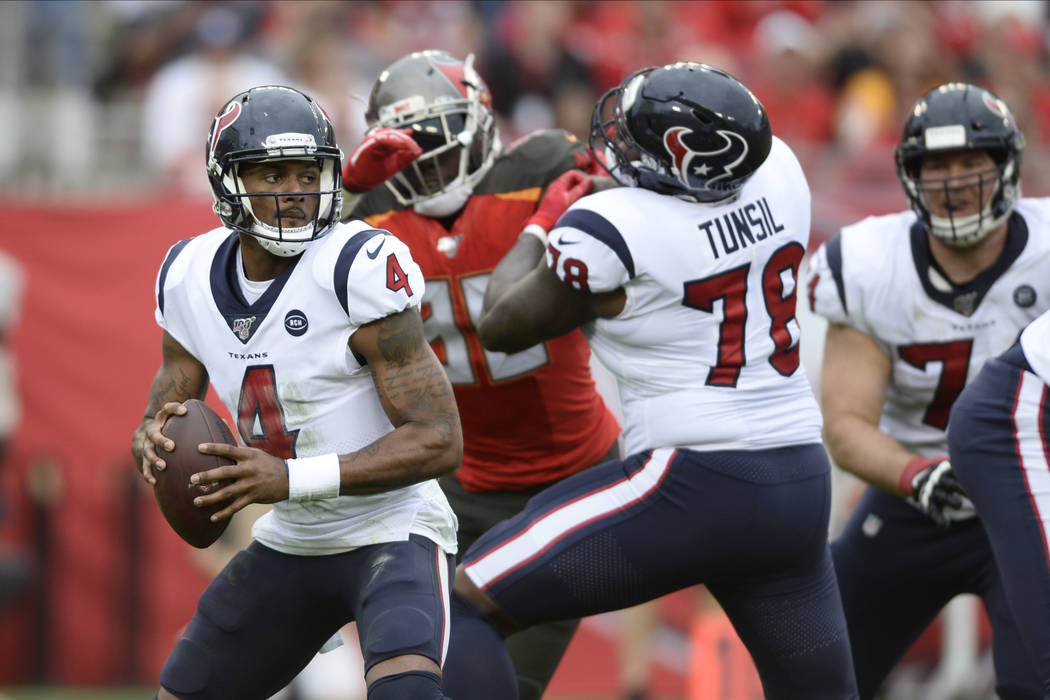 Houston Texans quarterback Deshaun Watson (4) looks to pass against the Tampa Bay Buccaneers during the second half of an NFL football game Saturday, Dec. 21, 2019, in Tampa, Fla. (AP Photo/Jason Behnken) 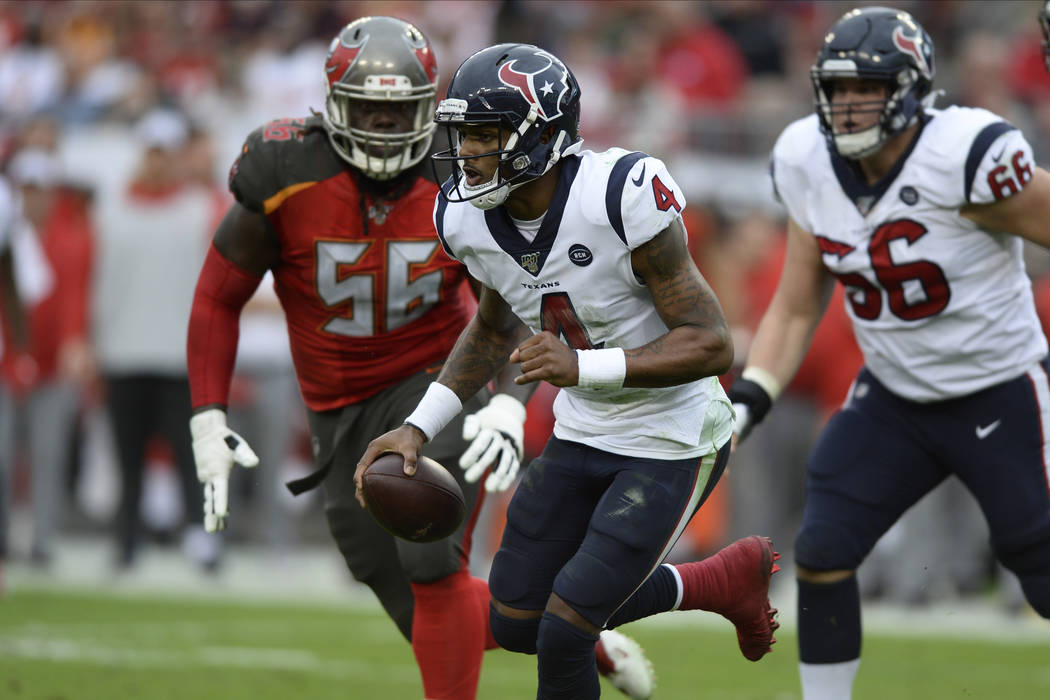 Nothing is more difficult to handicap than the NFL’s wild-card weekend.

Three seasons ago, all four favorites won and cashed against the spread. In the eight games since, underdogs are 8-0 ATS.

Adding to our betting complexity is this gem from VSiN’s Point Spread Weekly: Sunday road NFC teams have been money makers, going 12-4-1 ATS in their past 17. Both NFC games are Sunday.

Early money dropped the Bills from plus 3 to plus 2½. Lack of confidence in the Texans is understandable, but you might want to hold your nose when you back the Bills. They haven’t won a playoff game since December 1995.

One other reason to approach with caution: Josh Allen. Yes, the Buffalo quarterback has been much better in his second season, but since 2002, QBs making their first playoff starts during wild-card weekend are 8-28 SU and 10-26 ATS.

Deshaun Watson got his inaugural loss out of the way when he was beaten last season by Indianapolis.

All is not well with the Patriots. Last week’s shocking loss to Miami as a 17-point favorite highlights one of my favorite cliches: “Father time is undefeated.” Tom Brady had never lost in the NFL when he was at least a 14-point favorite.

His weapons are depleted. Yes, Julian Edelman is still helping, but Rob Gronkowski is enjoying retirement. Gambling on Antonio Brown blew up on the Patriots.

Yes, this is quarterback Ryan Tannehill’s first playoff game, but he’s not coming to Foxborough alone.

Running back Derrick Henry led the NFL in rushing (1,540 yards), and he marched the Titans into the playoffs with a 211-yard game last week at Houston.

I’m backing Tennessee at anything over plus 3, and I will tease them over plus 10.

You can’t back Cousins when the lights are the brightest. He’s 0-9 straight up on Mondays with the Vikings and Washington, and he lost his only playoff start with the Redskins at home. As a 2-point favorite Cousins and the Redskins lost to the Packers 35-18 in 2015.

Give me Drew Brees and his 6-2 straight-up record in Superdome playoff games. And I will lay the points.

The Eagles opened as 1-point favorites, and early money flipped to the Seahawks. I’m recommending an early bet on Seattle before the line climbs to minus 3.

It’s easy to forget that this is Carson Wentz’s first playoff start. An injury opened the door for Nick Foles during the Eagles’ Super Bowl run two years ago.

Wentz has been special down the stretch, willing an injury-riddled team into the playoffs with a four-game winning streak.

But the Seahawks have been road warriors, winning seven of eight away from Seattle, including 17-9 at Philadelphia on Nov. 24.

I would take Wentz in the rematch if the Eagles were healthy. But they’re not, and so I’ll take Russell Wilson and his 8-5 playoff record with the Seahawks.