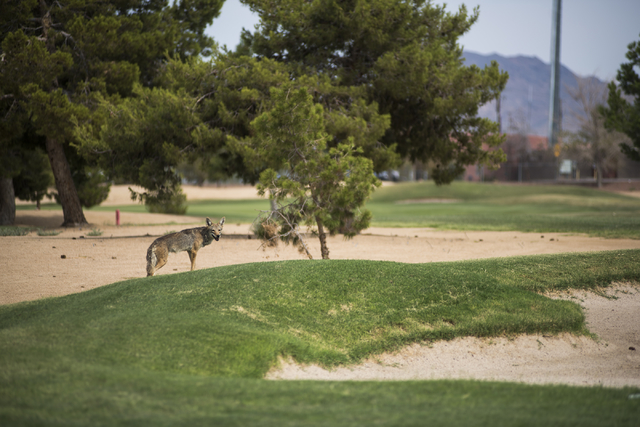 For many golfers and residents surrounding golf courses, what is happening at Black Mountain Golf and Country Club in Henderson is an all-too-often occurrence.

The fate of Black Mountain is still undetermined, but a developer has proposed building houses on some of the course while leaving the original “Founders 9” open. Wary homeowners have created the Black Mountain Neighborhood Association and are monitoring the situation. Historic documents and pending City of Henderson legislation could be key factors in how the situation plays out.

“Black Mountain represents Henderson’s coming of age and early leaders envisioned homes and open spaces that would define Henderson as no longer a government/company town, but a city committed to quality of life,” homeowner Denell Hahn said. “Through the last 60 years, it has been the social and recreational heart of the neighborhood.”

According to documents provided by Hahn and Ann Barron, an agreement between Basic Management Inc. and Black Mountain Golf and Country Club dated Nov. 4, 1957, states that “said property shall only be used for the purpose of constructing and operating a golf course together with clubhouse facilities.”

Basic Management Inc. was created in 1952 as an off shoot of Basic Magnesium Inc. to own and manage the company’s assets. Today, Black Mountain Inc. subsidiaries are Black Mountain Remediation Company and the Landwell Company.

A separate agreement between the Bureau of Land Management and Black Mountain Golf and Country Club dated May 9, 1962, also states that an additional 140 acres of land must be used “for golf course site purposes only.”

An amendment being considered by the city of Henderson could also impact Black Mountain. The amendment to the development code intends to clarify how the city deals with the “closing, conversion and redevelopment of golf courses, parks, common open spaces and ‘public space’ real property (collectively, ‘Subject Properties’), as well as the ongoing maintenance of Subject Properties.”

Black Mountain Golf and Country Club president Larry Tindall told the Review-Journal in October that a development plan is a way to maintain some of the course.

“Golf is not the most popular sport around,” Tindall said. “This is the only way we can keep part of the course open. It wasn’t an easy decision and we’re all upset about it, but we would like to play golf there for the rest of our lives.”

Butch Harmon told me in January that he believed Gary Woodland, who won the Waste Management Phoenix Open on Sunday, was ready for a breakout year after dealing with a tragedy.

“He got off to a great start last season, but he and his wife, Gabby, were expecting twins and they lost one of the babies and that was devastating,” Harmon said. “He has worked hard on his game and I probably spent more time working with Gary than anybody. I expect good things from him this year.”

With a player’s card, locals can play Las Vegas National for as low as $35.