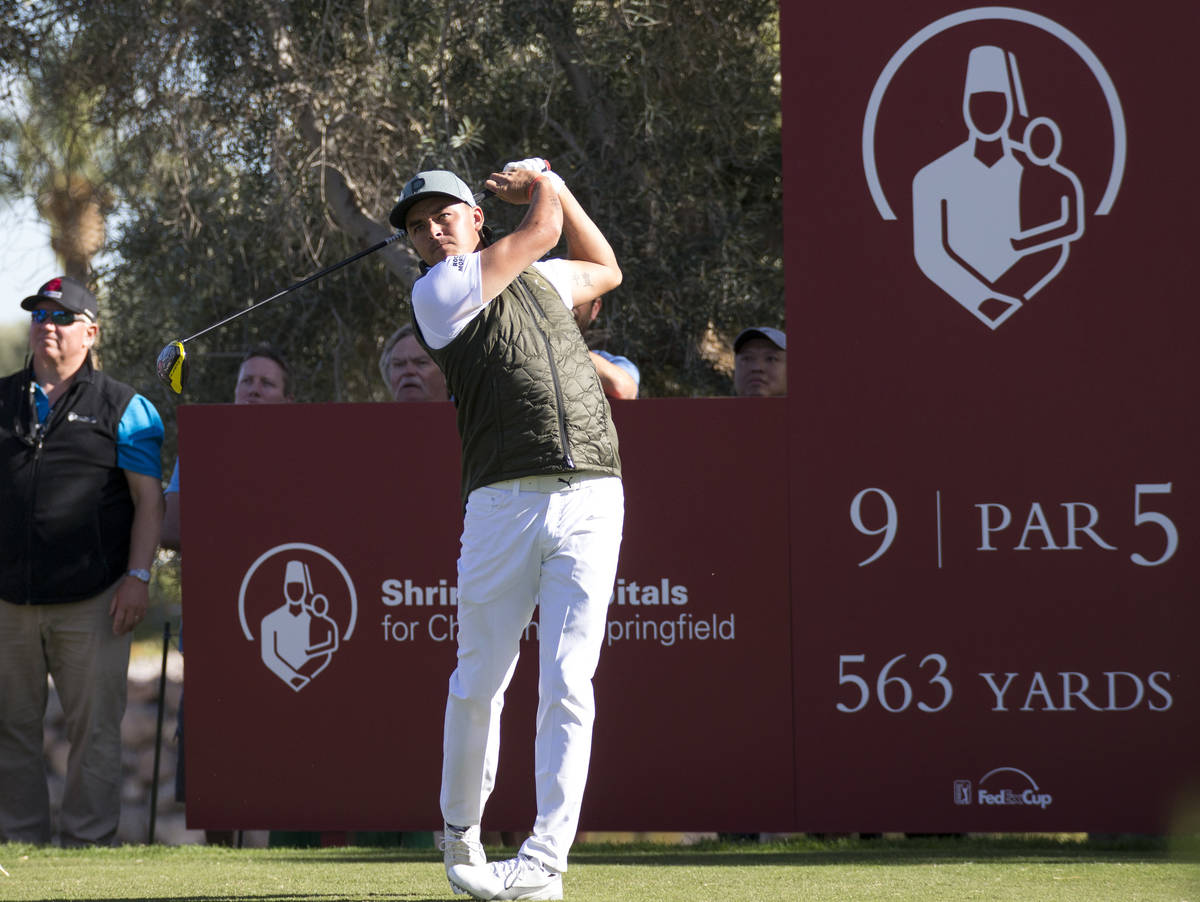 Rickie Fowler watches his drive from the ninth tee during the first round of the Shriners Hospitals for Children Open golf tournament at TPC at Summerlin in Las Vegas on Thursday, Nov. 1, 2018. (Richard Brian/Las Vegas Review-Journal via AP)

The Shriners Hospitals for Children Open remains scheduled for Oct. 8-11 at TPC Summerlin, according to tournament executive director Patrick Lindsey, even after PGA Tour officials announced on Monday a revamped tournament schedule following a slew of tournament cancellations and postponements due to the coronavirus pandemic.

“As of now, there have been no discussions about our date moving,” Lindsey said. “We are planning to play the Shriners Hospitals for Children Open on the original dates. But I also understand that there are a lot of moving parts and more decisions could be made between now and then.”

Because the tournament is closely associated with health care and the Shriners Hospital, Lindsey said, “our main focus is the health and well-being of our fans, players and sponsors. Decisions will be made with that in mind.”

On March 12, the Players Championship in Florida was canceled following the first round, then several other tournaments were postponed or canceled. Among the cancellations was the British Open, which was scheduled for July 14-17 in England.

Former UNLV All-American and PGA Tour player Charley Hoffman, who recently donated $25,000 to support charities that receive funds from the canceled Texas Valero Open and is the chairman of the Tour’s player advisory council, is hopeful the new schedule happens as announced.

“The reality is that this is a best-case scenario. We all hope the epidemic is gone by June, July or August,” Hoffman said. “The Tour is the engine behind the major championships. Careers are defined by how you play at major championships, so everybody wants to make sure they happen. But as a player, it’s more important to get the Tour back playing.”

PGA Tour commissioner Jay Monahan said the new schedule is still dependent upon government and health officials deeming it safe to move forward. A start date for regular Tour events is still to be determined.

“As the commissioner says, this is an evolving situation and nothing is off the table,” Hoffman said. “We want to be back on the golf course as soon as possible and competing, but there are a lot variables. The most important thing is health and safety. We’re not going to be trailblazers by any means to get this sport back on TV before it needs to be until we are confident in the safety of the world, not just the United States, because a third of the Tour are international players.”

Planned for April 23-26, the Westgate Resorts Celebrity Classic at the Las Vegas Country Club has been postponed until fall dates to be determined due to the coronavirus pandemic.

PGA Tour player and Las Vegas resident Alex Cejka is playing in the Outlaw Tour’s Orange Tree Classic in Scottsdale, Arizona, which concludes Thursday. Also in the field is Mitchell Carlson, a Durango product and the 2001 Southern Nevada Junior Golf Association player of the year.

On the Cactus Tour, UNLV sophomore Veronica Joels is playing in the Apache Creek tournament in Apache Junction, Arizona, Wednesday through Friday. Vegas resident Tori Peers is also in the field.