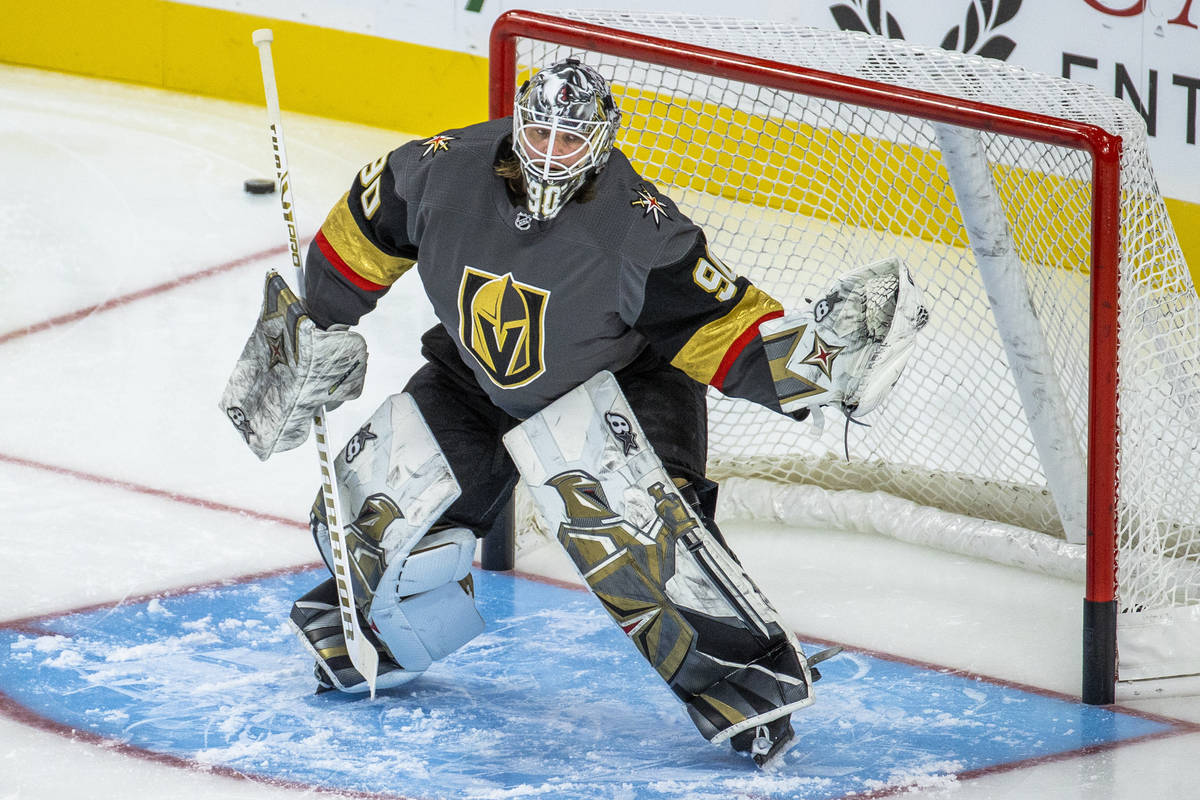 Golden Knights goaltender Robin Lehner (90) stops a puck from a teammate during the warm ups of an NHL season-opening game versus the Anaheim Ducks at the T-Mobile Arena on Thursday, Jan. 14, 2021, in Las Vegas. (L.E. Baskow/Las Vegas Review-Journal) @Left_Eye_Images

There are two sides to those 11 minutes Golden Knights goaltender Robin Lehner spoke Wednesday. Never discount the most important one.

It’s not about promises.

Lehner reminded us how isolation created by the NHL’s COVID-19 restrictions can be unhealthy, especially for those suffering from mental health issues.

He gave an impassioned address to media about what he believed were broken promises by the league and its players’ association regarding the loosening of rules should a team have a specific number of members vaccinated.

Nobody knows what was truly said other than those intimately involved. The league denied such promises were made about changes to protocols. It’s all semantics, anyway.

The “P” word might not have been directly mentioned, but be assured there was some level of inference that vaccines would lead to a clearer sense of normalcy. Lehner wouldn’t address the situation so specifically if he didn’t believe there was such a pledge.

Someone with clout said something to that effect along the way. Or at least close to it. This isn’t about being totally lost in translation. I mean, it’s not as if this all came from Chance, the Golden Knights mascot.

More important is this: Lehner continues including others in his personal travels toward better mental health and a more peaceful existence. He has become a prominent face among professional athletes in helping to combat stigmas.

This is the bigger picture here, the willingness over time to describe his own battles with mental illness and drug and alcohol addictions.

It’s incalculable to determine how many people Lehner has helped in a world where one in five families is affected by mental illness. Meaning, don’t let the key narrative get lost here.

“With Robin, I support him with everything,” said Knights captain Mark Stone. “I don’t think people really understand the things he’s gone through in his life. He has come a long way to becoming the person, the teammate and goalie and family man he has become. I respect him and will always have his back no matter what.

“Robin and I think everyone in the world wants a normal life.”

Stone in another time could run for office. He was asked twice following Wednesday’s victory over the Sharks about Lehner’s contention that players were essentially sold a bill of goods. Stone didn’t answer directly either time.

The guy who has experience working as a players’ association representative avoided taking a stance like he might a barber’s clippers. Stone danced around the subject better than he does defensemen.

And still, his points in regard to Lehner were far more significant than whether he agrees or not that the league and NHLPA have been disingenuous.

Lehner has been a winner in net for the Knights since being acquired at the trade deadline last year. But the forthrightness about his struggles trumps all that. This isn’t just about hockey. The pandemic has been defined globally by separation. It has been our reality for over a year now.

So whether it’s NHL players being confined to hotel rooms on the road and not being able to shop at the grocery store when home or anyone being shut off in similar ways, the long-term mental health impact has been and will continue to be vast.

I don’t know if the NHL or NHLPA or both blatantly lied to players. I doubt there was a specific promise about anything. Leagues and unions tend not to expose themselves so easily.

But an assumption. Suggestion. Expectation. Belief. Pick a word. Maybe they all apply.

Just know the most essential part of those 11 minutes was a sustainable and honest message that continues to remind others that the darkness can indeed subside.