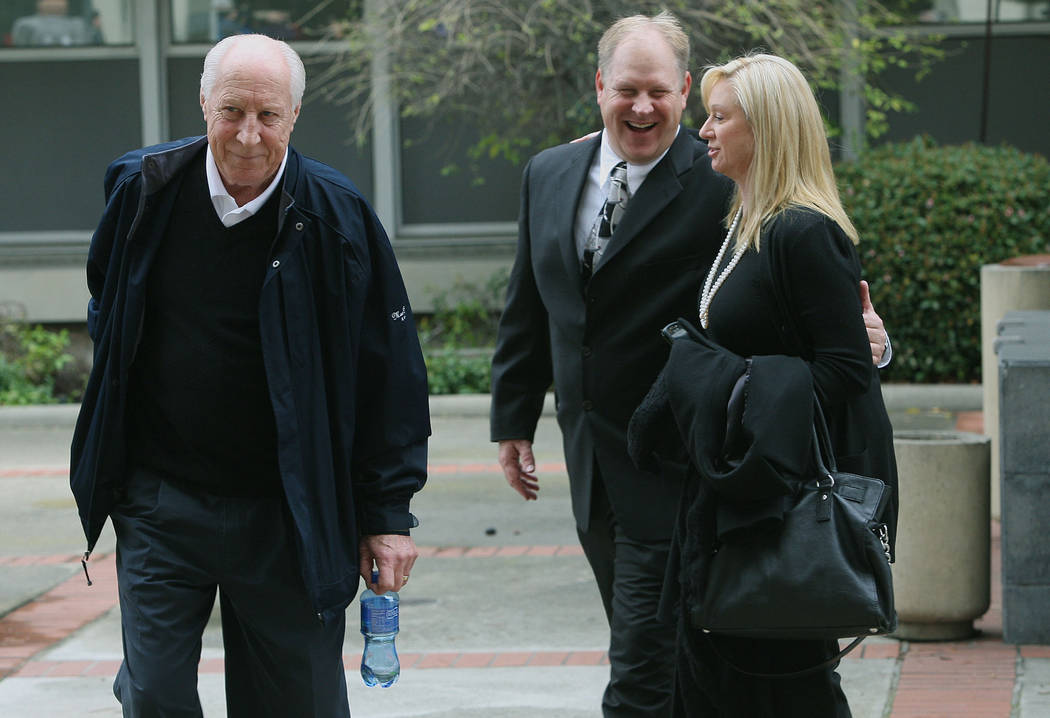 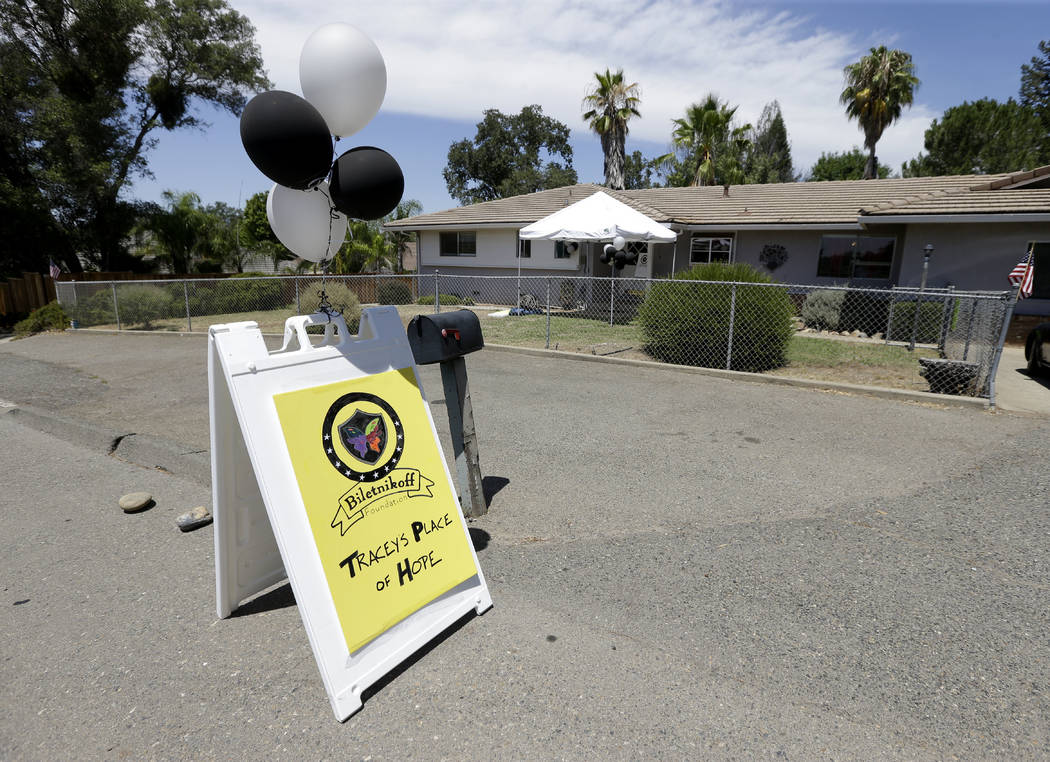 Silver and black balloons flutter in the breeze outside Tracey's Place of Hope on Thursday, July 23, 2015, in Loomis Calif. The home is named after murder victim Tracey Biltnikoff, the daughter of former Oakland Raider great Fred Biletnikoff, whose foundation raised funds for the renovation of the teen residential facility. (AP Photo/Rich Pedroncelli)

It began before his sister was murdered by an ex-boyfriend in 1999, before his famous father and the family came to understand such unfathomable grief.

“We had always fought against anyone who hurt or treated women badly,” Fred Biletnikoff Jr. said. “Now it’s something we talk to the kids about all the time.”

He speaks of football players at Coronado High School, where the son of Raiders great and Hall of Fame wide receiver Fred Biletnikoff was hired as head coach in May.

The issue of domestic violence touched the NFL again Wednesday when Raiders offensive lineman Trent Brown was accused of multiple acts against the mother of his son as part of a lawsuit filed this week.

In the suit, the woman, Brown’s ex-girlfriend, said she has been “bruised, bloodied and battered” from the attacks and lived in fear of Brown.

The player released a statement Tuesday denying all allegations. The team and the NFL said they were looking into the matter.

The dark and disturbing cloud of domestic violence has floated above the NFL for some time, even after commissioner Roger Goodell in 2014 announced a baseline suspension of six games without pay for one domestic violence offense and a lifetime ban for two, even without a criminal charge or conviction.

Still, when not pressured by public fury or presented with indisputable video evidence, the league has in many cases disregarded such penalties for much lesser ones based on what it says are mitigating factors.

It just never seems to explain what those are.

Mostly, the NFL gets tough on discipline when TMZ uncovers the next horrifying video of such an act.

While many teams have been directly affected by such cases involving players — Ray Rice in Baltimore, Greg Hardy in Carolina, Ezekiel Elliott in Dallas, Kareem Hunt in Kansas City, Reuben Foster in San Francisco — perhaps no team has a more emotional and personal attachment to the issue than the Raiders.

It traces back some two decades, when the body of 20-year-old Tracey Biletnikoff was discovered dumped on a hillside on the Canada College campus in Redwood City, California, strangled to death.

Her murderer was sentenced to 55 years to life in prison.

“I’ve told the story about my sister a few times since arriving (at Coronado),” Biletnikoff said. “We are dealing with high school kids whose hormones are all over the place, so I make sure they know: If we ever see any of them treat a women badly in any manner, they’re gone. We have wonderful mothers and cheerleaders who help this team tremendously, and they’re going to be respected at all times.

“I want our players to know how important it is to treat women well, to want that for their mothers and sisters in life. The support my mom and dad and entire family received from the Raiders, from (late owner) Al Davis before he passed and now continuing with (owner) Mark Davis will never be forgotten.”

This was Raiders owner Mark Davis to the San Francisco Chronicle in 2015 when speaking on domestic violence in the NFL: “We have zero tolerance. To make it more Raiders-like, let’s say double zero tolerance, like Jim Otto’s number … I’ll lead by example. I’ll continue to speak if someone asks. I think this is a very, very serious situation. But the thing I can deal with is our own organization.”

No one knows what that might mean for Brown’s immediate future with the Raiders, but the zero policy stance was rightly questioned when coach Jon Gruden brought Tom Cable back to the franchise in 2018 as offensive line coach.

This, despite in 2009, Cable’s former wife and a then-recent girlfriend told ESPN the Raiders’ former head coach had a history of violent behavior toward women that dated more than 20 years.

Meanwhile, Fred Biletnikoff Jr., a 53-year-old man who is coaching his 31st team this season across the professional, college, international and high school levels, whose sister’s life was cut so tragically short at the hands of an abuser, continues to shape the minds of boys wanting to be men.

“I told them before the season, if you drop a touchdown pass or miss a game-saving tackle, oh, well, it happens,” Biletnikoff said. “But if you walk past a full can of garbage at home and don’t take it out for Mom, we have a problem. And if you’re the one acting like a fool in class, we have a problem.

“And if you ever don’t treat women with the utmost respect, man, we have a real problem.”

3
Raiders expected to get key defender back Sunday