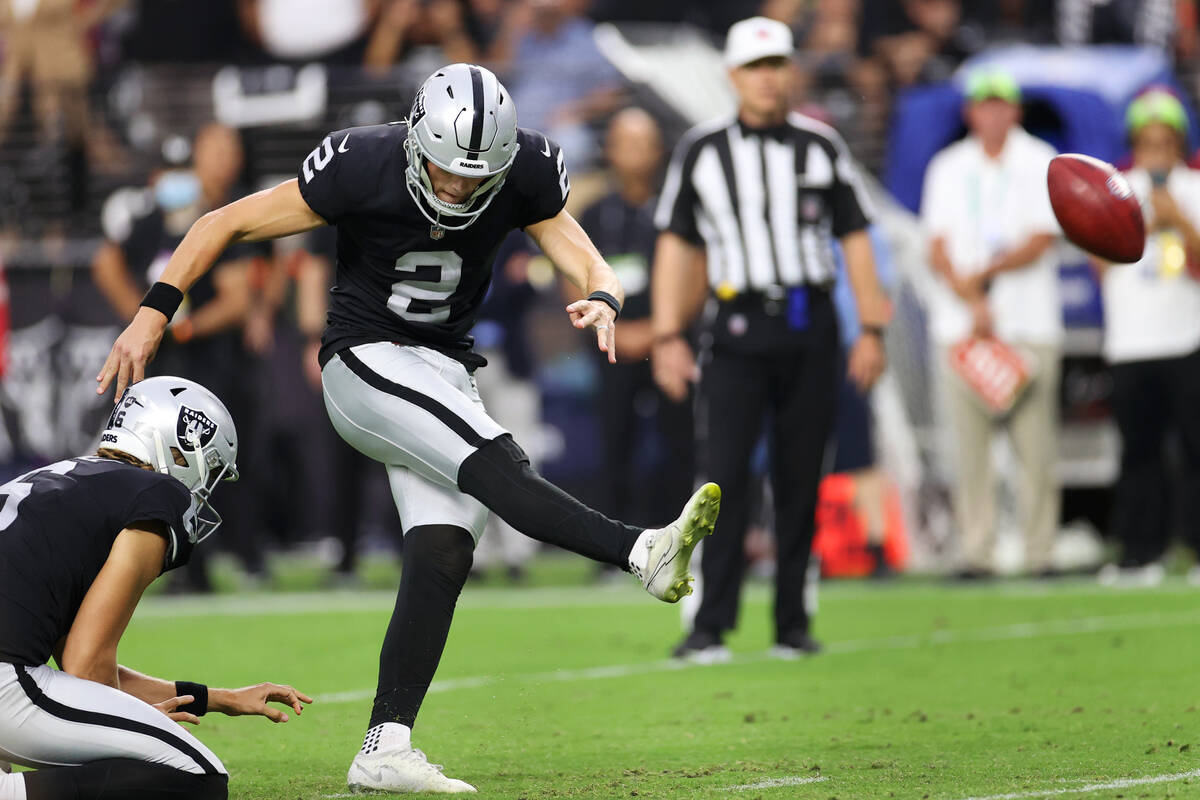 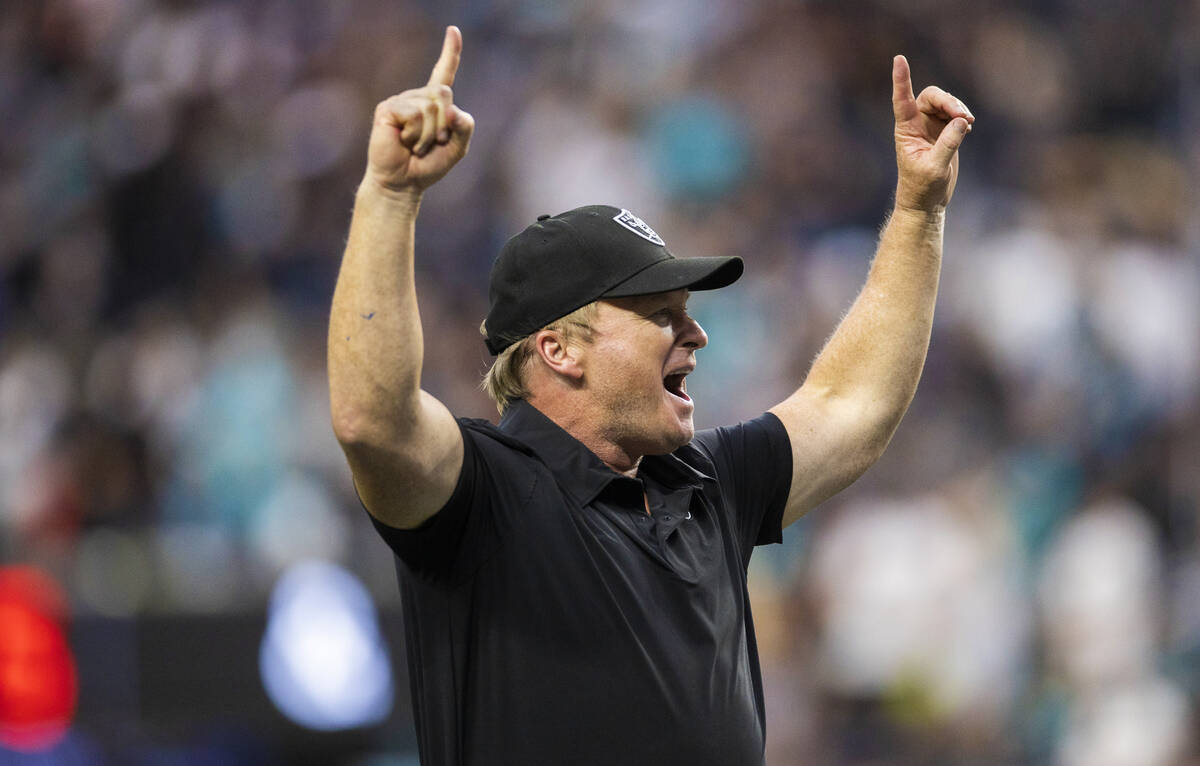 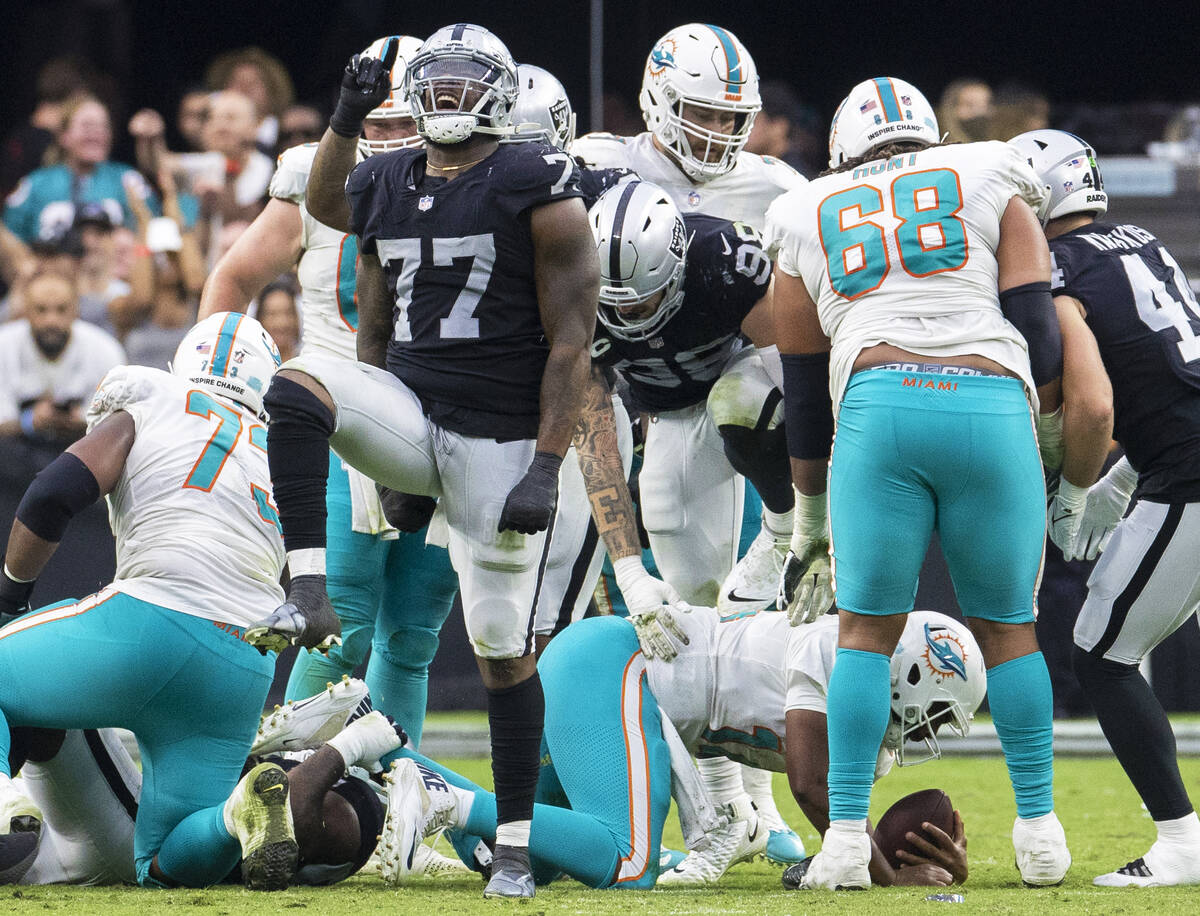 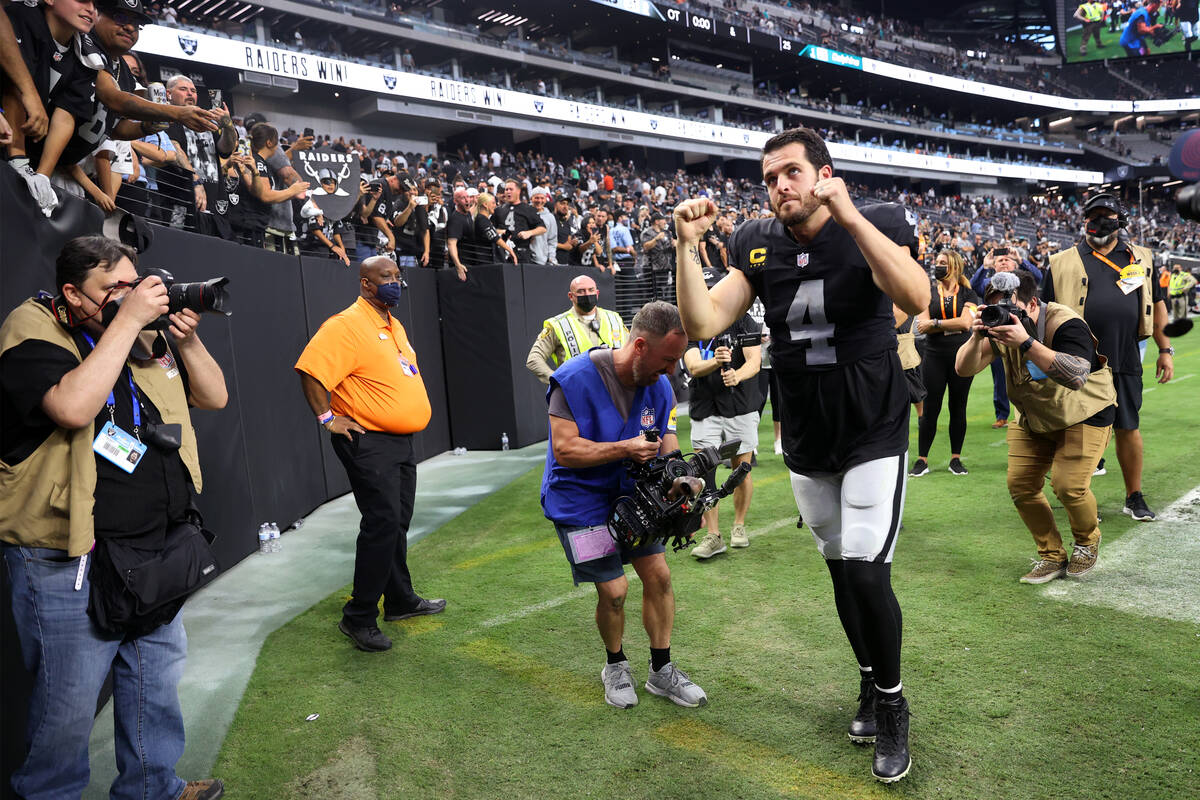 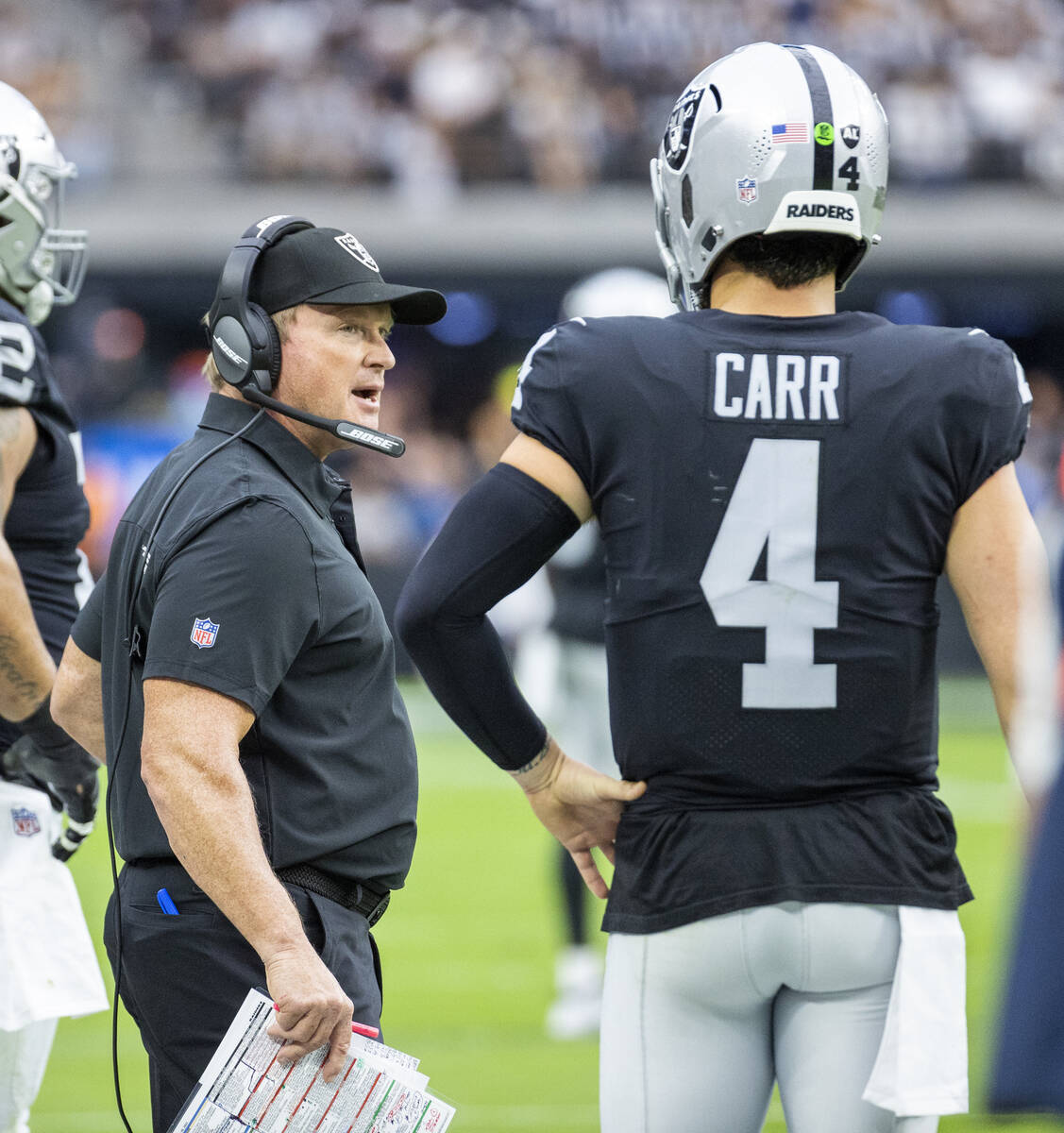 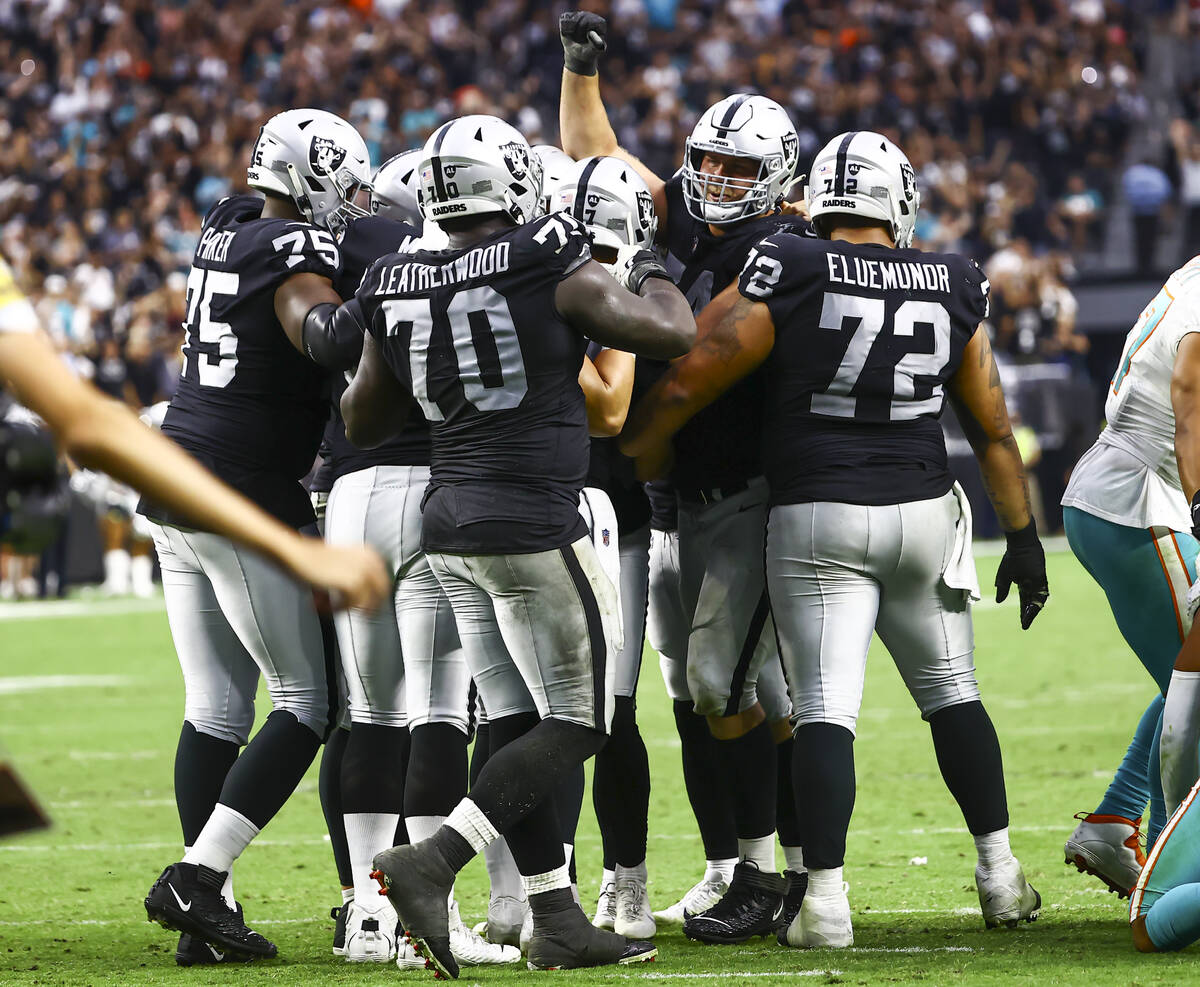 Raiders celebrate around kicker Daniel Carlson (2) after his game-winning field goal in overtime against the Miami Dolphins in an NFL game at Allegiant Stadium in Las Vegas on Sunday, Sept. 26, 2021. (Chase Stevens/Las Vegas Review-Journal) @csstevensphoto

The Raiders did just enough to remain unbeaten. Here are their grades for Sunday’s win over Miami:

Derek Carr (26 of 43, 386 yards, 2 TDs) threw a Pick-6 via some serious miscommunication with tight end Foster Moreau. The offensive line allowed two sacks, nine quarterback hits and four tackles for loss. It was a big-time struggle for those up front. But the running game was saved by a career-high 111 yards from Peyton Barber on 23 carries. Barber also scored a touchdown and his 27-yard run late in overtime helped set up the game-winning field goal. Carr completed passes to nine receivers. Bryan Edwards and Henry Ruggs combined for seven catches and 167 receiving yards. Hunter Renfrow had five for 77.

It was really, really good … for three quarters. But when you blow an 11-point lead in the fourth quarter and can’t get a backup quarterback (Jacoby Brissett, 32 of 49 for 215 yards) off the field when he’s facing downs such second-and-23 and fourth-and-20, things need some cleaning up. Quinton Jefferson had the team’s lone sack. The Raiders had seven quarterback hits and two tackles for loss.

Daniel Carlson hit the game-winner in overtime from 22 yards — he also made good from 50 and 38 — but his missed extra point with 13:47 left eventually allowed Miami to tie the game with a touchdown and two-point conversion with two seconds remaining in regulation. A play that might go unnoticed but shouldn’t is wide receiver Zay Jones downing a punt inside the Miami 5 late in the first quarter. One play later, cornerback Casey Hayward tackled rookie Jaylen Waddle in the end zone for a safety to get the Raiders on the scoreboard. It was the first catch Hayward had allowed all season. And it actually delivered two points.

Not sure about the timing of some second-half timeouts, but Jon Gruden’s late-game play-calling, specifically in overtime, proved to be a big difference yet again. Gus Bradley’s defense didn’t allow Miami points on six of its first seven possessions and kept the Raiders in this one until the offense figured some things out.