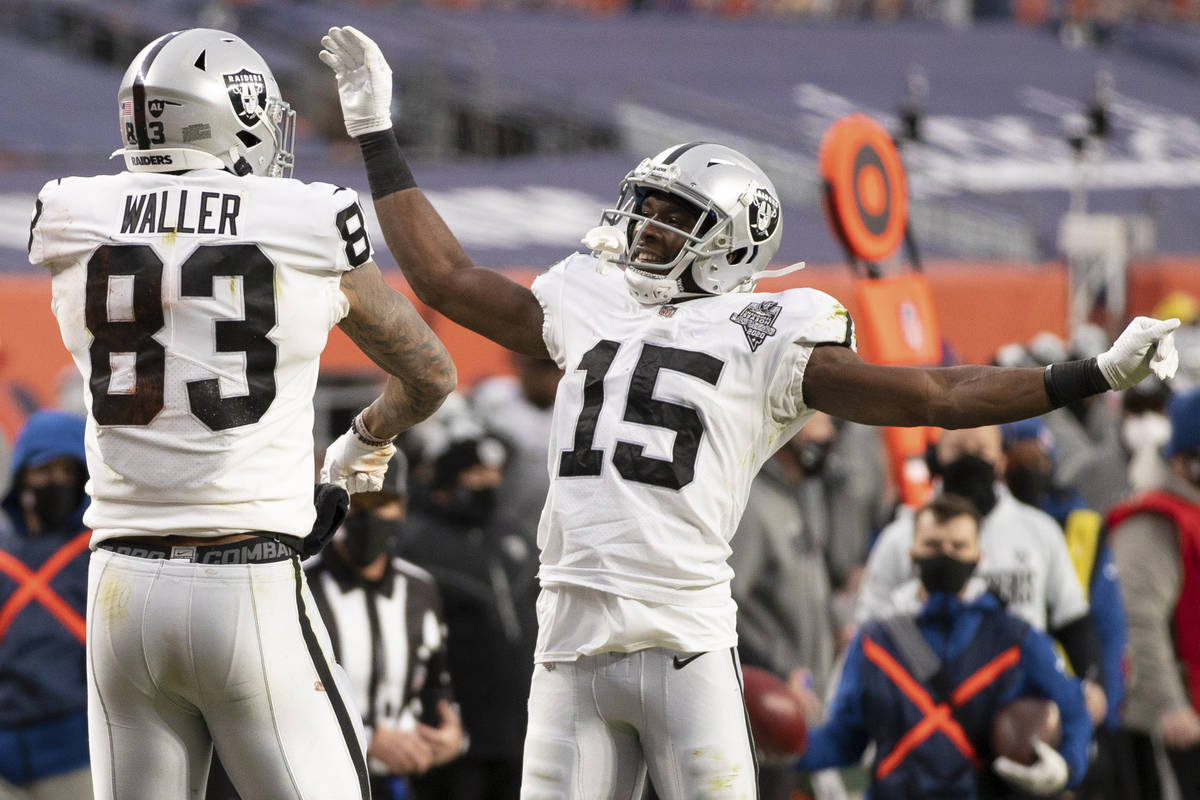 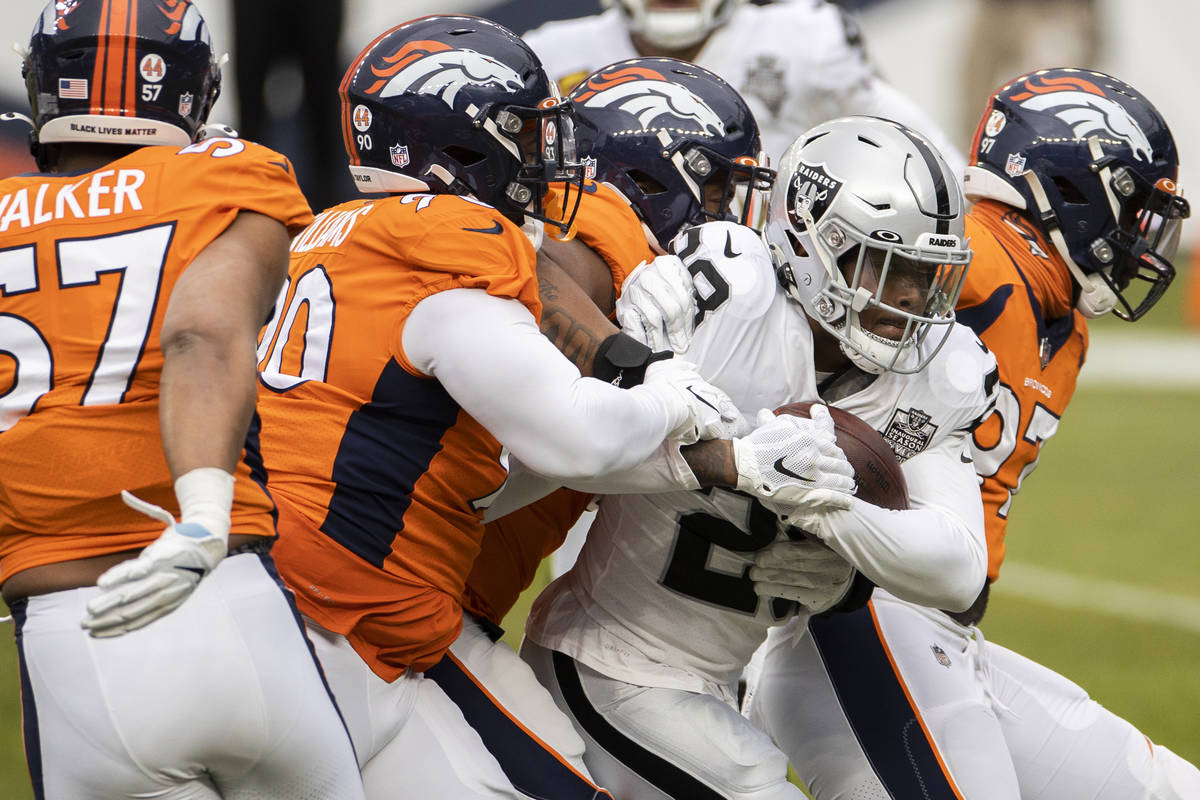 Raiders running back Josh Jacobs (28) drives forward with a group of Denver Broncos on his back in the first quarter during an NFL football game on Sunday, Jan. 3, 2021, at Empower Field at Mile High Stadium, in Denver, CO. (Benjamin Hager/Las Vegas Review-Journal) @benjaminhphoto 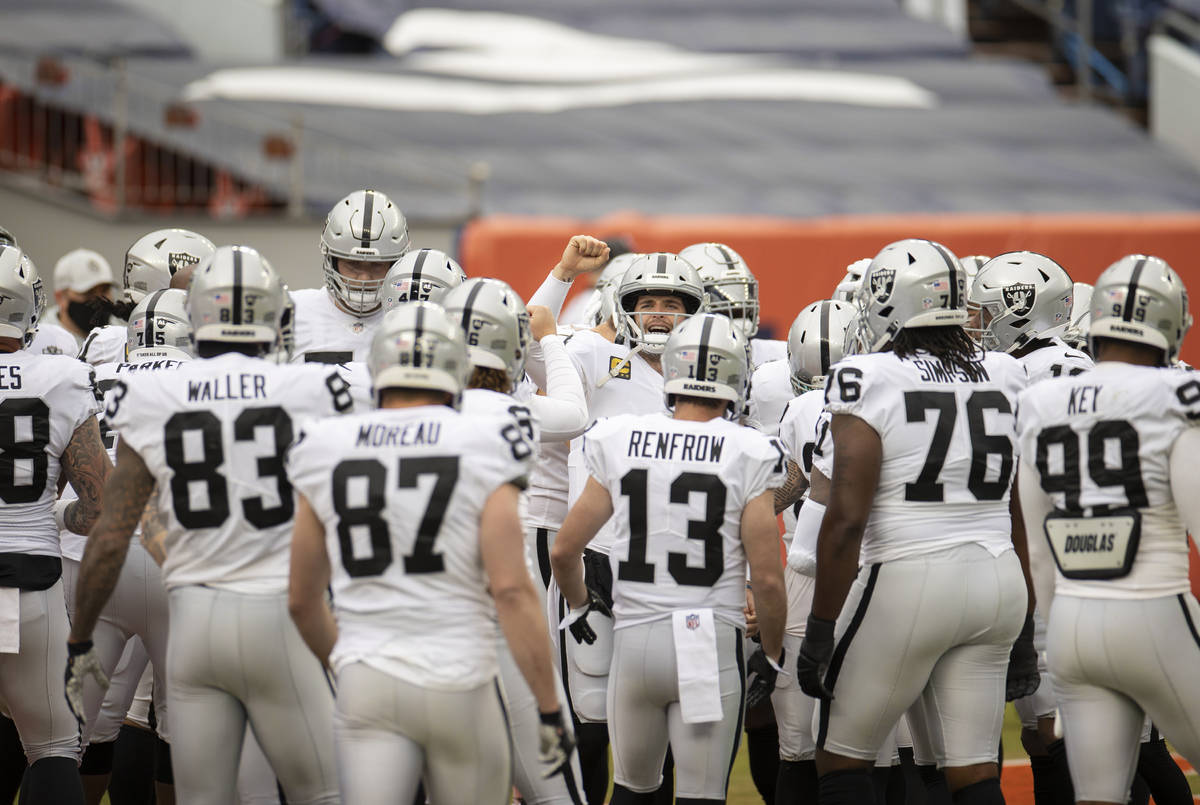 Raiders quarterback Derek Carr, middle, fires up his team during warm ups before the start of an NFL football game against the Denver Broncos on Sunday, Jan. 3, 2021, at Empower Field at Mile High Stadium, in Denver, CO. (Benjamin Hager/Las Vegas Review-Journal) @benjaminhphoto

Up and down things went all afternoon. It’s hard to beat a game-winning drive that culminates with a successful two-point conversion. On the day he broke Tim Brown’s single-season team record for catches, Darren Waller was on the receiving end of the season’s final reception to win it. But the Raiders also turned the ball over four times, including three times on five second-half snaps. Waller finished with nine catches for 117 yards and a score to go along with his two-pointer. Derek Carr completed 24-of-38 for 371 yards, with two scores and two interceptions. Josh Jacobs (15 rushes, 89 yards, two scores) became the first Raiders running back to begin a career with consecutive 1,000-yard seasons. The Raiders averaged 7.3 yards per play and trailed in time of possession by nearly seven minutes.

This side wasn’t helped much throughout by an offense that sputtered with turnovers, but penalties again reared their ugly head for a defense depleted by injuries. Denver was 7-of-16 on third down (but only three of its last 10) and took a late fourth-quarter lead when the Raiders got lost in coverage and allowed a 92-yard scoring pass from Drew Lock to Jerry Jeudy. Maxx Crosby (team-best seventh of the season) and Nicholas Morrow had sacks for the Raiders. Crosby added two quarterback hits and two tackles for loss.

In converting on a 33-yard field goal and three extra points, kicker Daniel Carlson broke the single-season franchise scoring record of 142 points by Sebastian Janikowksi in 2010. Carlson finished the season with 144 points. The Raiders even blocked two field-goal attempts (Crosby had both), one from 70 yards at the end of the first half and then a 63-yard try that would have won it for Denver in the final seconds. A.J. Cole averaged 49.8 yards on four punts, having two downed inside the Denver 20, including one at the 4.

Changes have to be made on both sides of the ball, especially on defense. The Raiders were one of the league’s worst teams over the final seven games of the season. They were flagged 14 times for 111 yards on Sunday. They need big upgrades in the secondary and still lack a true No. 1 wide receiver. But they made the critical plays when needed most to sweep the Broncos, The two-point conversion call was smart to target the team’s All-Pro tight end in Waller. One of head coach Jon Gruden’s most important offseason decisions will be naming a full-time defensive coordinator.