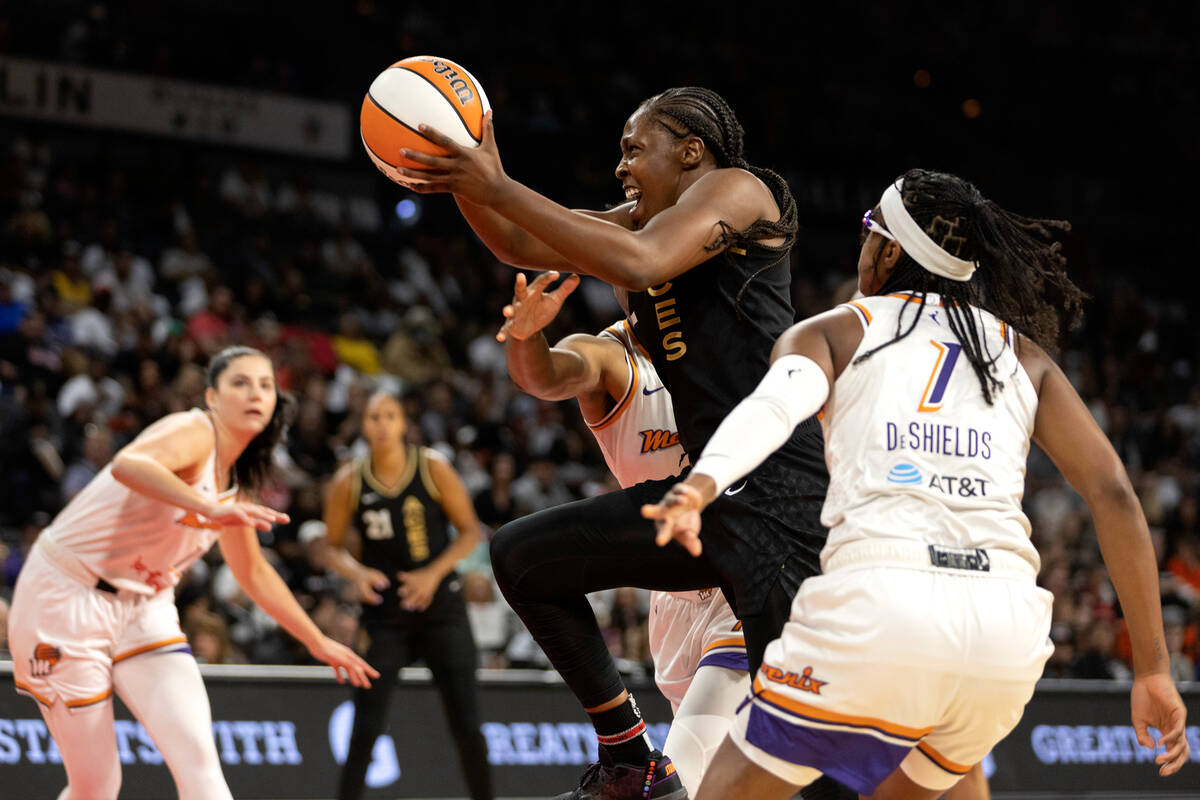 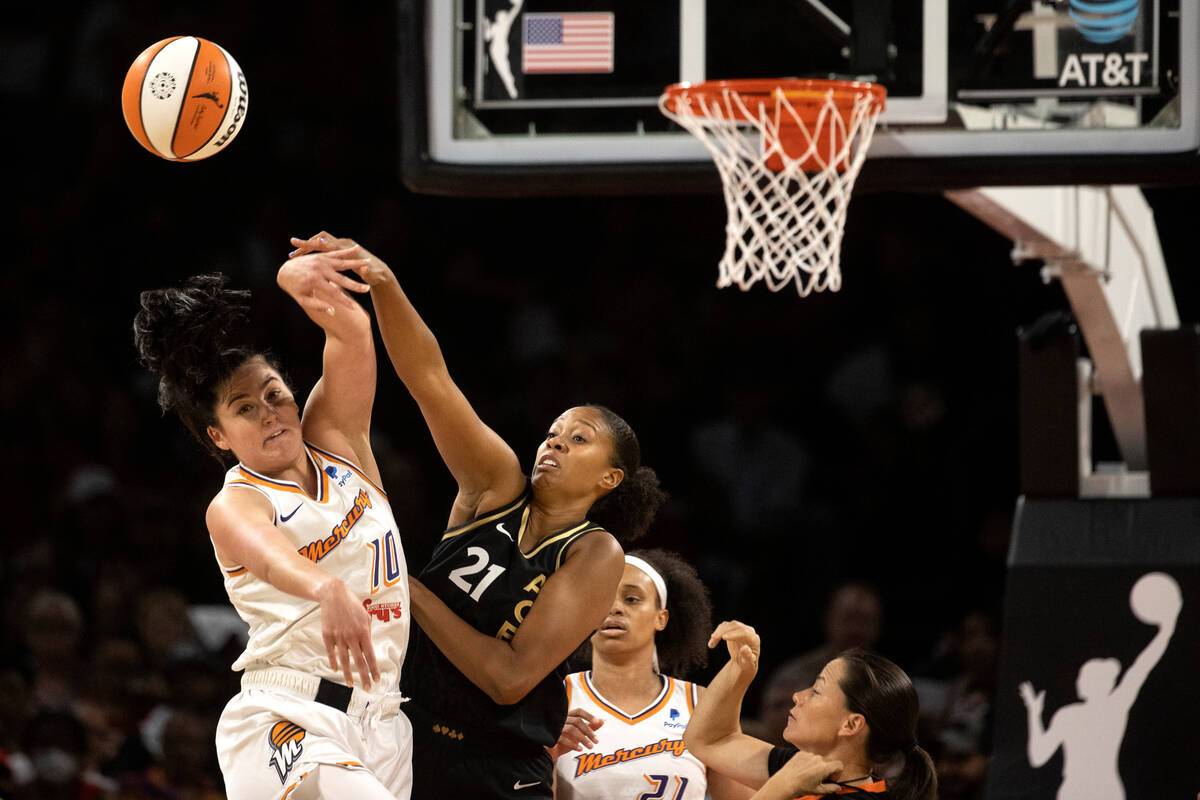 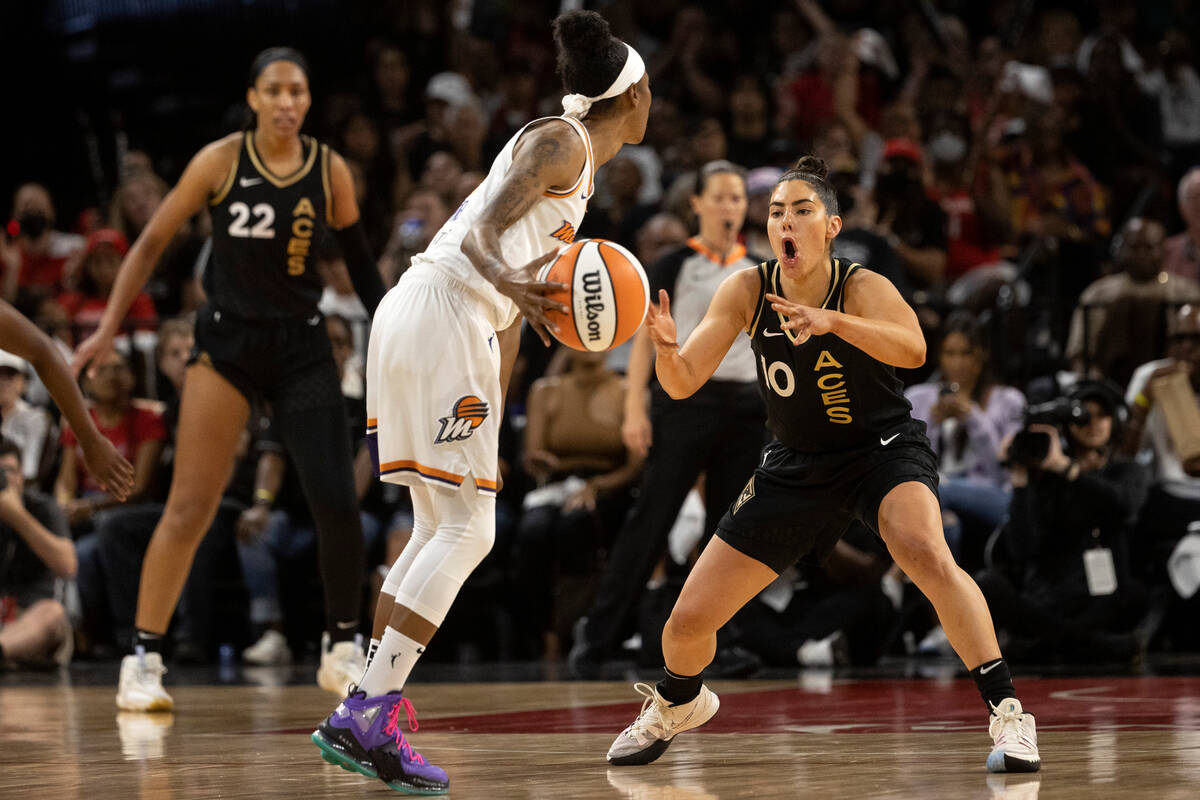 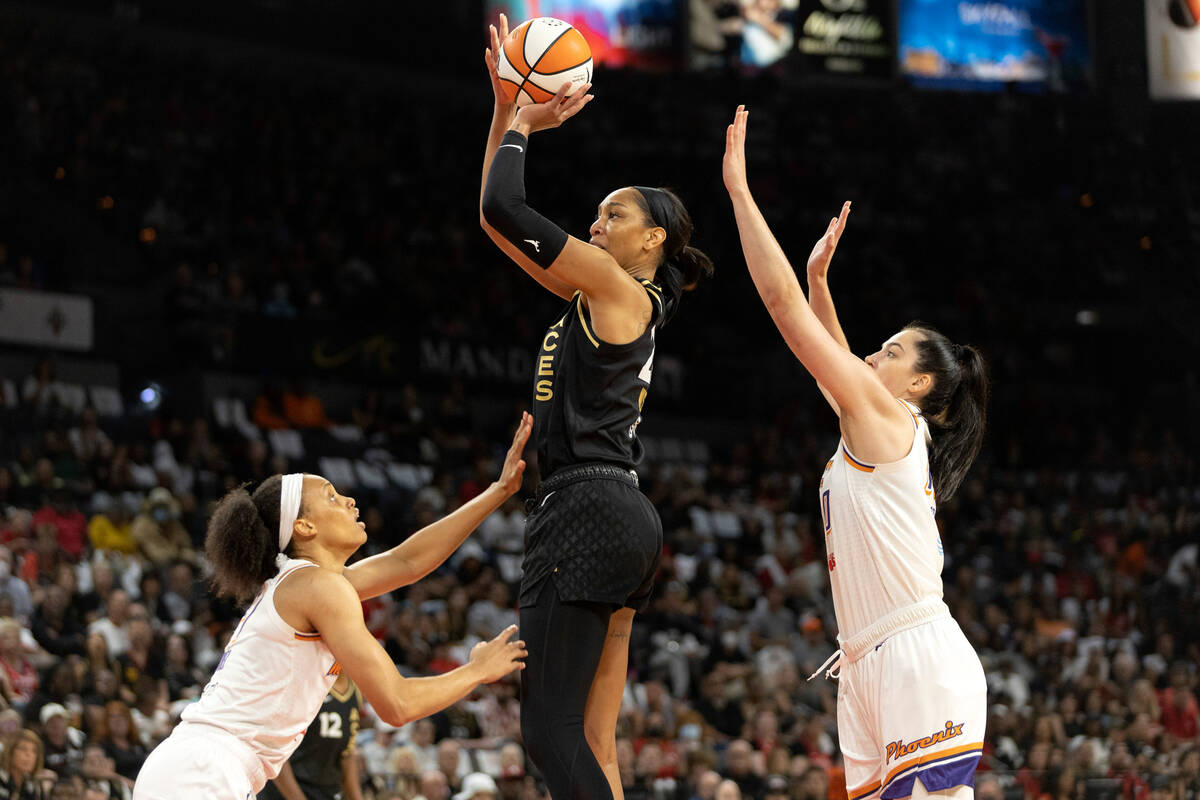 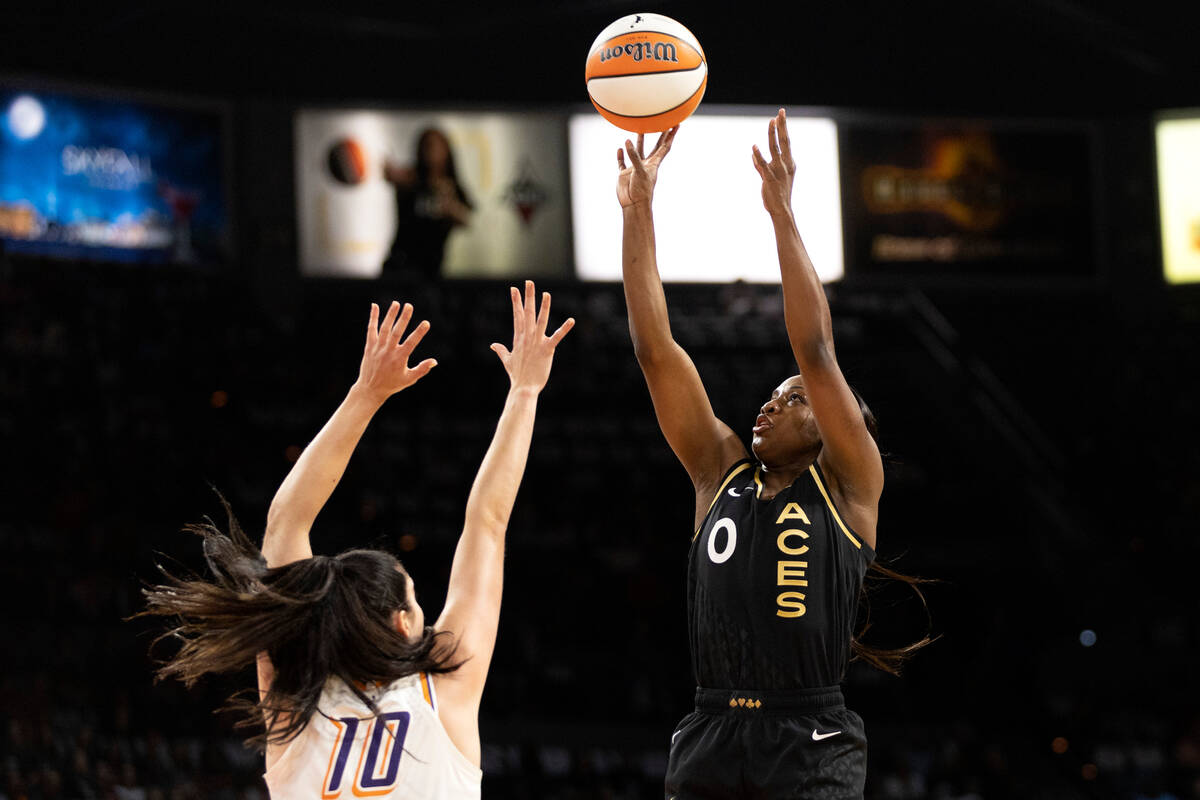 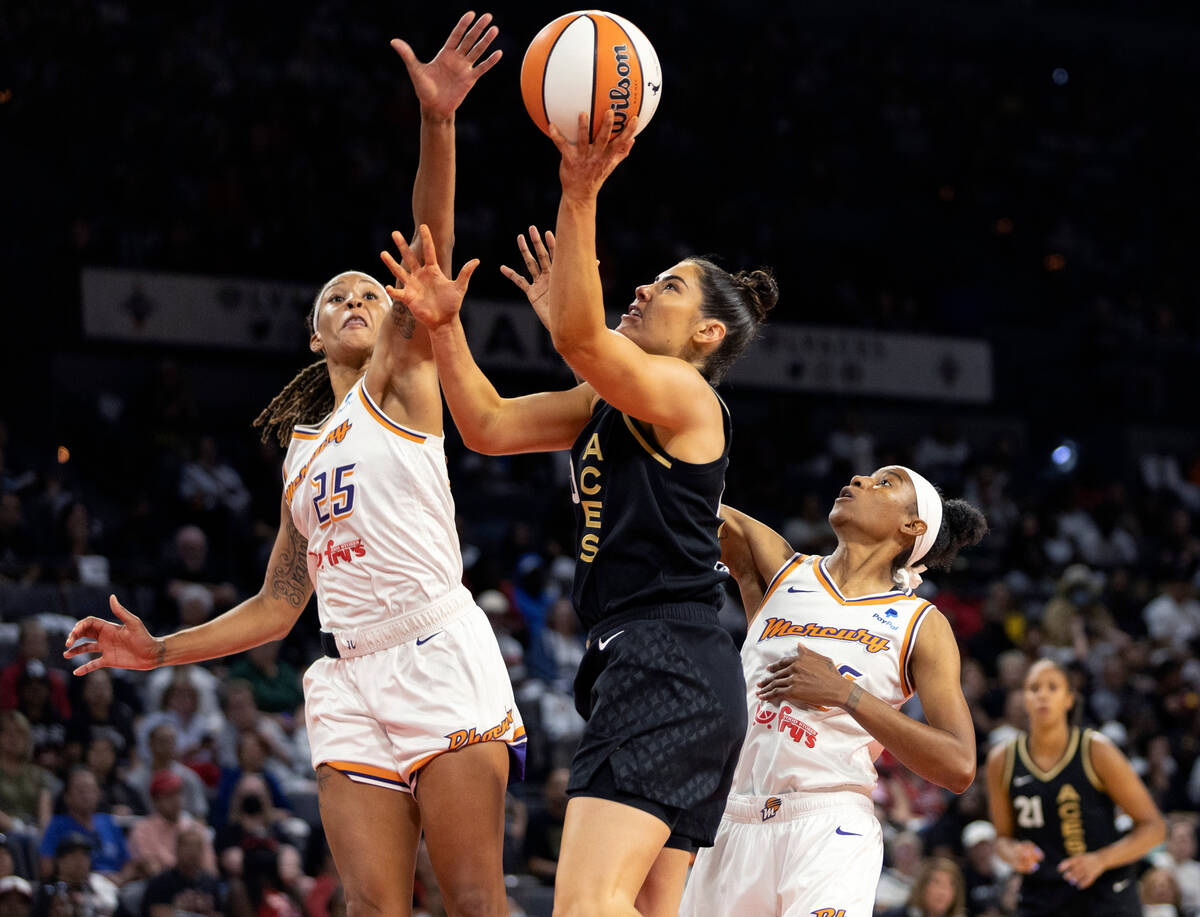 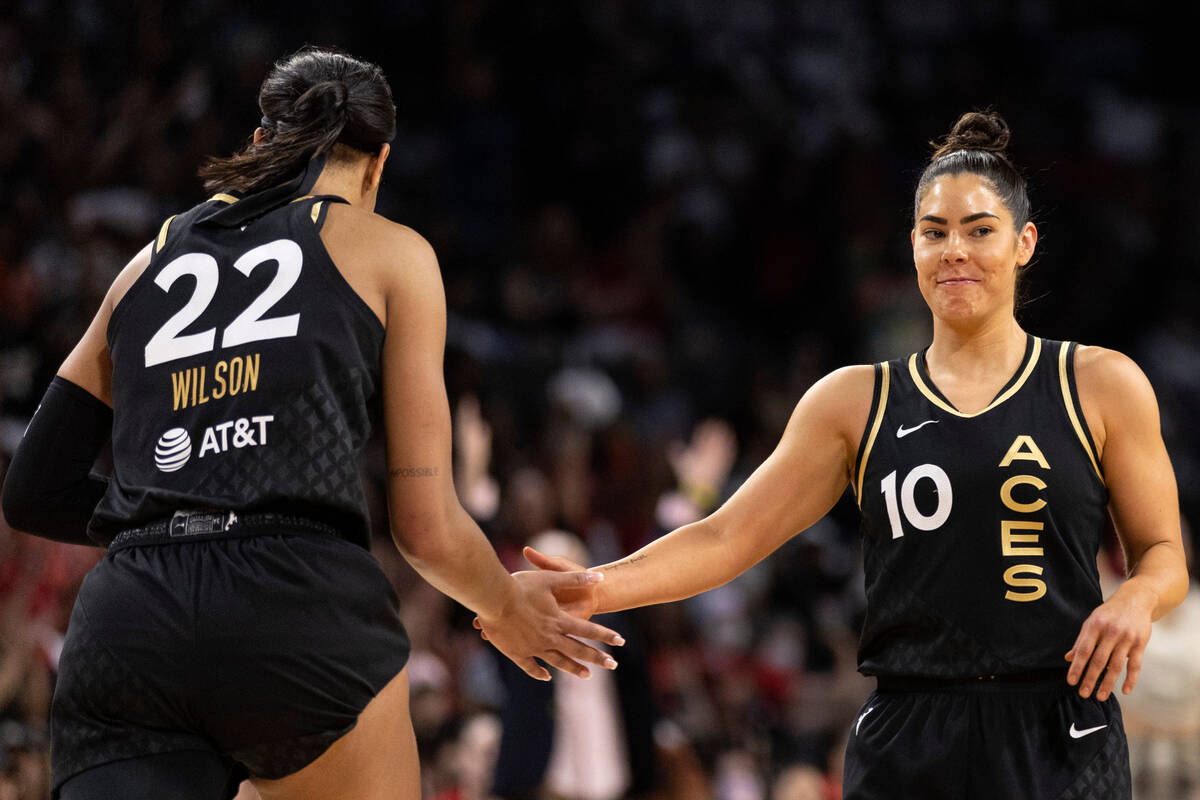 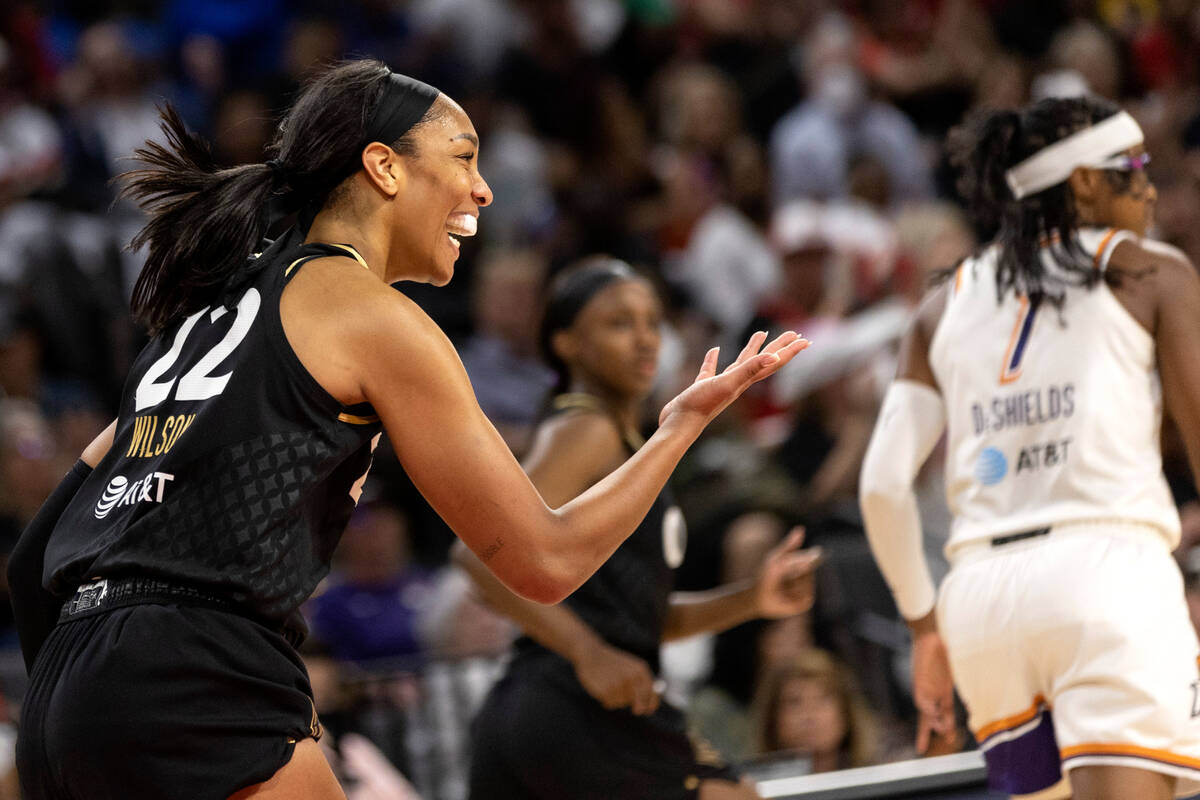 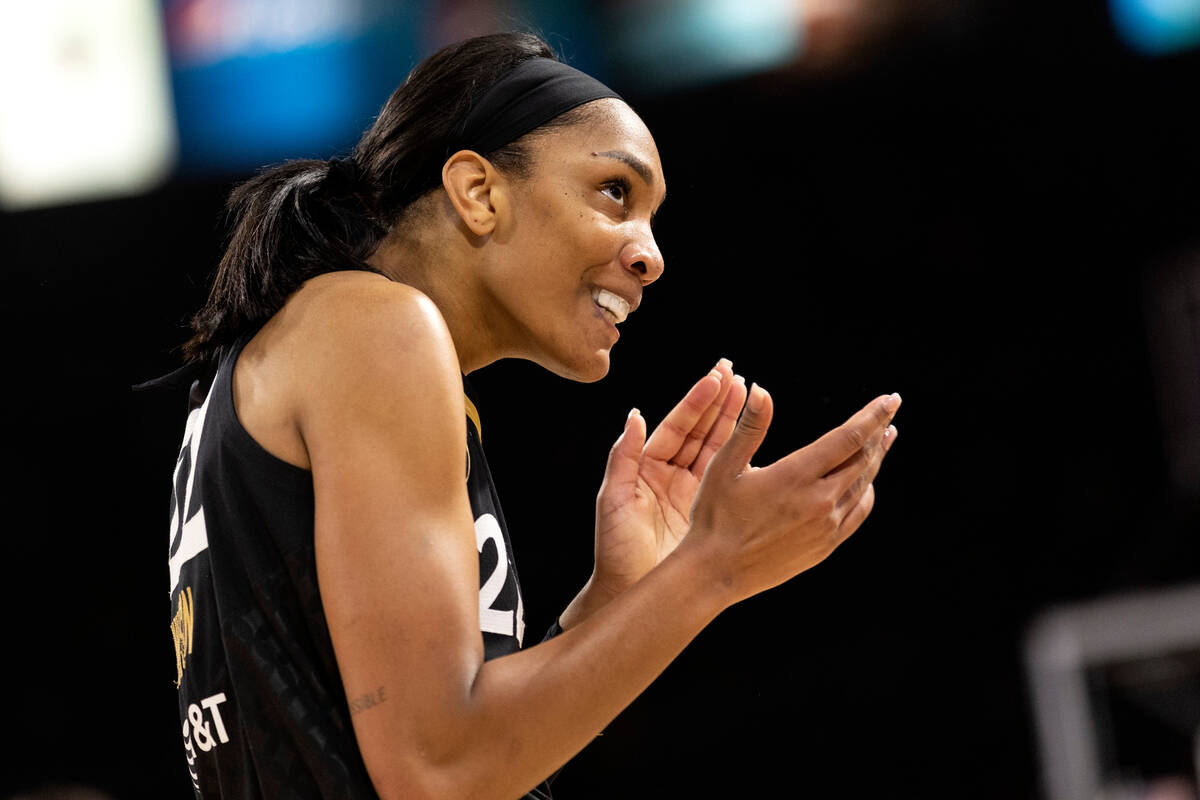 Las Vegas Aces forward A'ja Wilson (22) claps to the crowd after a referee called a foul on the Phoenix Mercury during the first half of a WNBA playoff basketball game at Michelob ULTRA Arena on Saturday, Aug. 20, 2022, in Las Vegas. (Ellen Schmidt/Las Vegas Review-Journal) @ellenschmidttt

They did what a No. 1 seed should against an inferior, depleted, beaten-down opponent.

No mercy. No doubt.

The Aces on Saturday night took care of business and then some, eliminating Phoenix from these WNBA playoffs 117-80 before an inspired, raucous, towel-waving 9,126 at Michelob Ultra Arena.

How one-sided was it?

The Aces — who won the best-of-three series 2-0 — are known for their thin bench and basically offer a seven-player rotation.

Four starters didn’t play the entire fourth quarter. And a fifth played 52 seconds of it.

You don’t give an eighth seed a splinter of life, hope, an idea that pulling off what would be a massive upset is possible.

This was hardly the Phoenix team in an elimination game that most predicted could make a run at the WNBA title prior to the season. No Diana Taurasi. No Skylar-Diggins Smith. No Brittney Griner. No Kia Nurse. No Shey Peddy.

Not much at all, really.

But things like that can creep into the heads of a prohibitive favorite. It can play with your mind. You know the team standing across from you.

You know how down they are.

“They’re bright people,” Aces coach Becky Hammon said of her players. “At the end of the day, it doesn’t matter if the Chicago Bulls are out there. You have to go out and execute your game plan and impose your will on your opponent. Doesn’t matter who it is. It shouldn’t change your mental or physical approach one bit.”

Didn’t seem to. The lead was 19 at halftime and grew to 33 six minutes into the third quarter, when the Aces were doing things like banking in long 3-pointers.

They would make a WNBA playoff record 23 3s — read that part again — in 36 attempts.

“Whoever plays them in the next round,” said Phoenix coach Vanessa Nygaard, “don’t let them shoot 3s, I guess.”

Playoff basketball is no different than the NCAA Tournament. Matchups reign supreme. Where does your side hold the most advantage and where might it be lacking. The Aces will be tested in the semifinals far more than what Phoenix presented.

It is there they will next face the winner of a Seattle-Washington series that the Storm lead 1-0.

Here’s the thing: Hammon’s team will win a championship if it defends. It’s that simple. The team that made its first 10 shots Saturday — also a WNBA playoff record — should be too explosive offensively over an entire series against most anyone.

Too many weapons. Too many players who can score at a high rate nightly.

They had 31 assists on 41 baskets Saturday night. That’s some serious sharing of the basketball.

Up and down effort

But they didn’t defend at all in the first quarter and allowed Phoenix to score 30 while shooting 64 percent. They then held the Mercury to 50 points the rest of the way.

It can be such an up-down effort defensively for the Aces. Just inconsistent enough to give other capable teams the belief the top seed can be taken down.

You’re not making 23 3s every night. Assuredly not again in these playoffs. Titles come at the other end of the court.

This was Hammon shortly before the game:

“We want to close it out. It’s always hard to close out a team. They play with a certain desperation. For us, we want to match that competitiveness and energy they are going to come at us with and be locked in for 40 minutes.

“That has been my theme. It will continue to be my theme to this team, no matter who we’re playing.”

They followed her message and took care of business. You don’t give an inferior, depleted team hope. You leave no doubt.