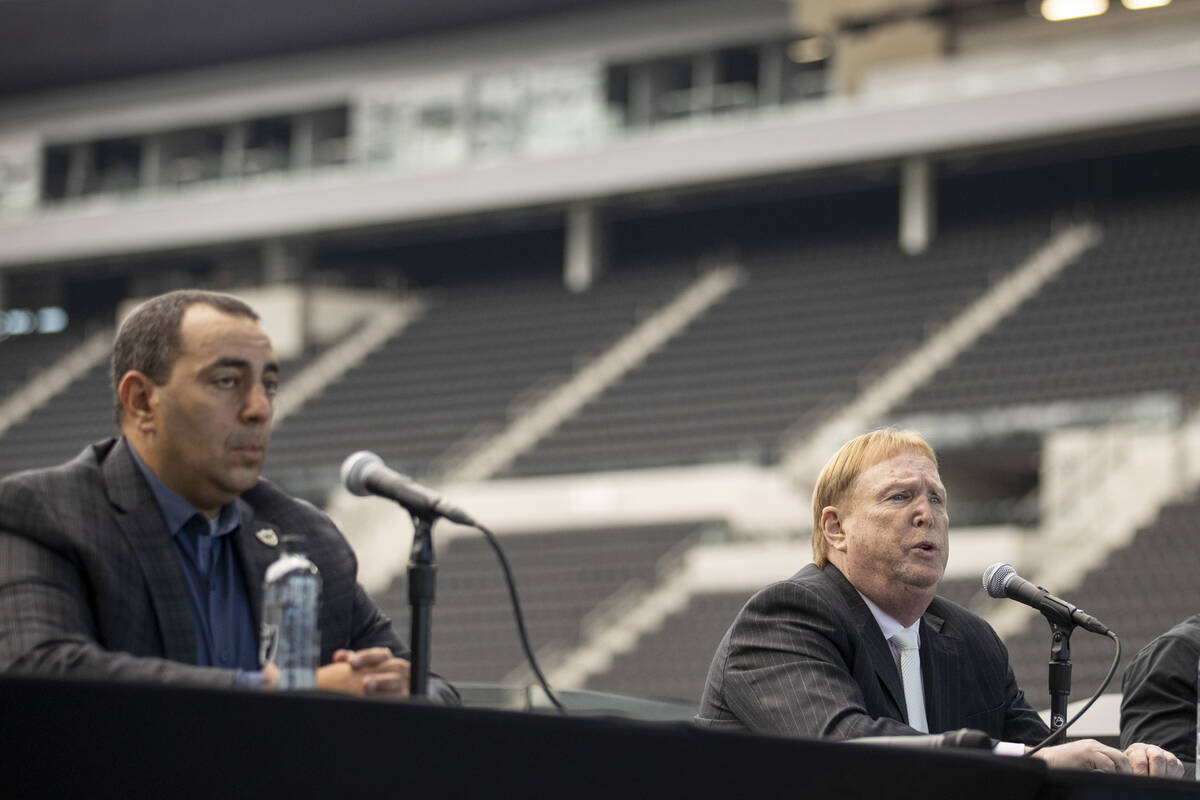 And you think there might be punches thrown between Canelo Álvarez and Dmitry Bivol on Saturday night.

The Raiders announced Friday that team president Dan Ventrelle was no longer part of the organization, this coming a day after Chief Operations and Analytics Officer Jeremy Aguero resigned his position after just seven months on the job.

This, less than a year after former president Marc Badain also resigned. That was during an eight-week span in which four top executives left the team.

Ventrelle on Friday told the Review-Journal he was fired in retaliation of him bringing up hostile work conditions to the NFL after owner Mark Davis ignored it.

“(Davis) did not demonstrate the warranted level of concern,” Ventrelle said. “Given this, I informed the NFL of these issues and of Mark’s unacceptable response. Soon thereafter, I was fired in retaliation for raising these concerns.”

Said Davis: “I’ve heard about (Ventrelle’s statement), but I won’t comment on it. The only thing I want made clear is that Dan Ventrelle was never president of the Raiders. He has always been the interim president … The interim was always a temporary designation to determine whether he would be the (full-time) president or not … He is not the president of the Las Vegas Raiders. Never was.”

When asked again for comment on Ventrelle’s allegations: “No, none at all,” Davis said.

There is obviously a re-organization of the entire franchise occurring. New general manager Dave Ziegler seems to be the latest sheriff in town with a leading power base.

Here’s another theory being strewn about: Davis wants a clean slate to build the organization more in his own image. A sort of reset to the entire thing. Nothing wrong with that.

Fresh starts, it is said, are those in which you believe in the the magic of beginnings. They just need to be executed the right way with those working for the organization. With an immense amount of respect.

None of this is to suggest the history and tradition of the Raiders should be forgotten or lessened for its importance. Super Bowls. Hall of Famers. The torch. The fricking Autumn Wind.

But these are now the Las Vegas Raiders. Where they play in a beautiful new facility that is Allegiant Stadium. Where the owner went outside the family and to New England in hiring a new coach in Josh McDaniels and GM in Ziegler.

Here’s a thought from one top NFL executive when quizzed about a next step the Raiders should take to improve the entire shop: That the worst thing the team has done is move on from Badain — thoroughly respected throughout the league. But if it was going to do so, then hire a team president from outside the organization. Someone who could be a true agent for change. Or — here’s a thought — just bring back Badain.

Evolving can create a positive conclusion if accomplished the correct way. How that is occurring with the Raiders remains a mystery, but this doesn’t: There have been several high-profile changes in the last year and there is obviously a different way of thinking in terms of what best fits a newfound mission.

How that has transpired within the building is anyone’s guess. Many believe in a contentious and harsh and disrespectful way. One thing is for sure: All doesn’t appear roses out at team headquarters.

There are more rumors of internal discord right now than there are running backs on the roster. But you will get just as many saying that Ventrelle was — in many ways — an incredibly unpopular leader.

All sorts of opinions on both sides. Lots to unpack.

But it’s happening. Things are changing fast. Have been for some time now.

See the slate? It’s getting cleaner and cleaner.

The fresh start is long ago underway.

For better or worse.