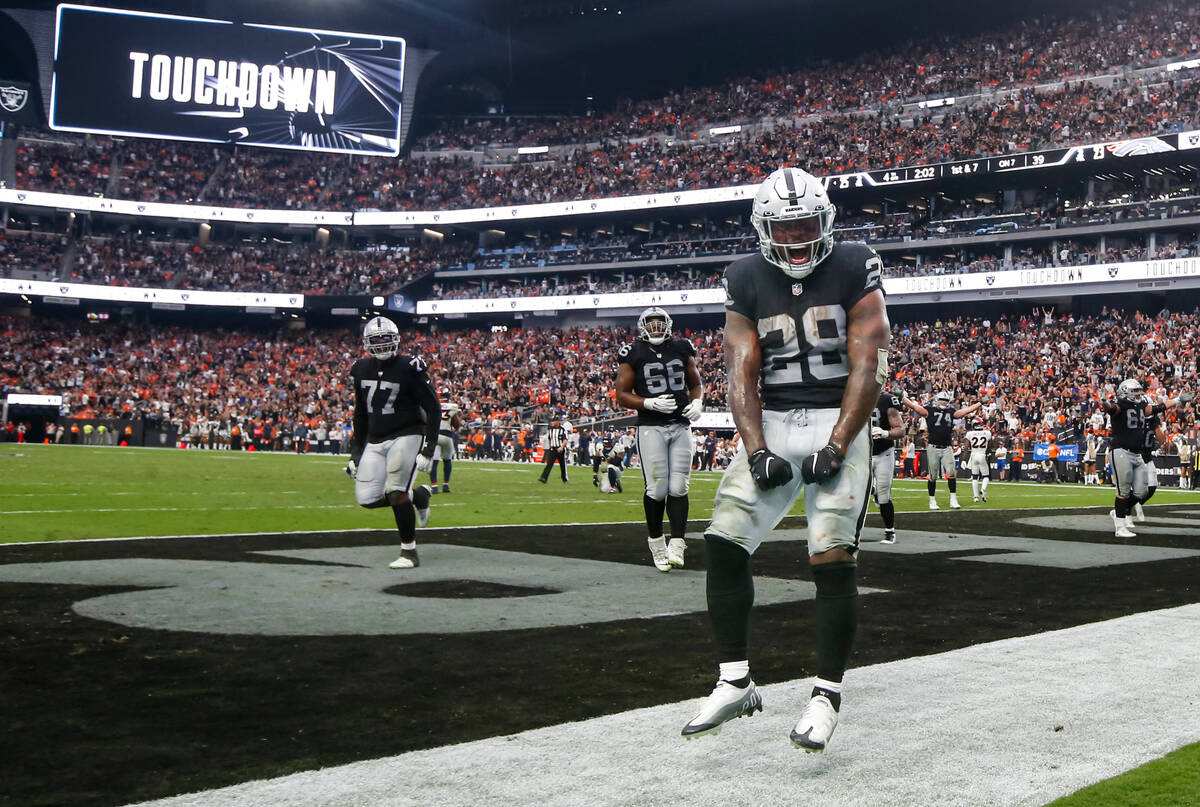 Raiders running back Josh Jacobs (28) celebrates after scoring against the Denver Broncos during the second half of an NFL game at Allegiant Stadium on Sunday, Oct. 2, 2022, in Las Vegas. (Chase Stevens/Las Vegas Review-Journal) @csstevensphoto 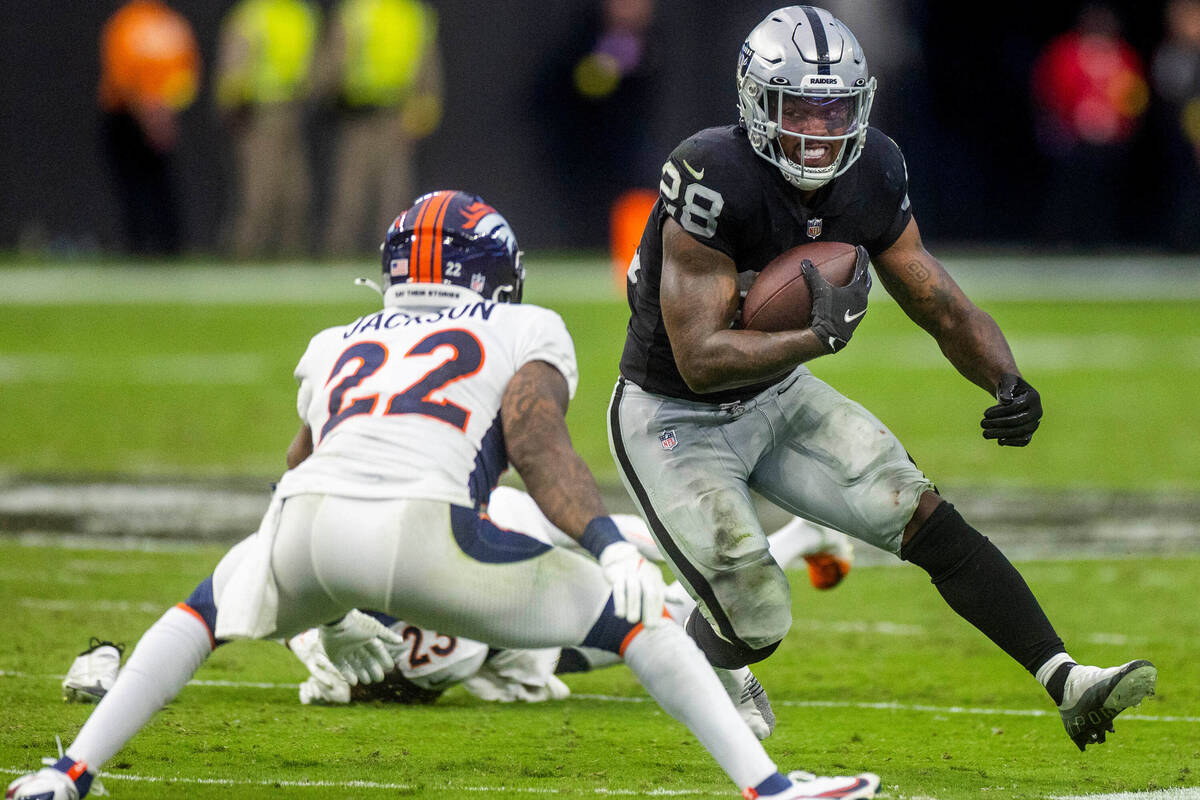 Raiders running back Josh Jacobs (28) readies to take on tackle attempt by Denver Broncos safety Kareem Jackson (22) during the second half of their NFL game at Allegiant Stadium on Sunday, Oct. 2, 2022, in Las Vegas. (L.E. Baskow/Las Vegas Review-Journal) @Left_Eye_Images 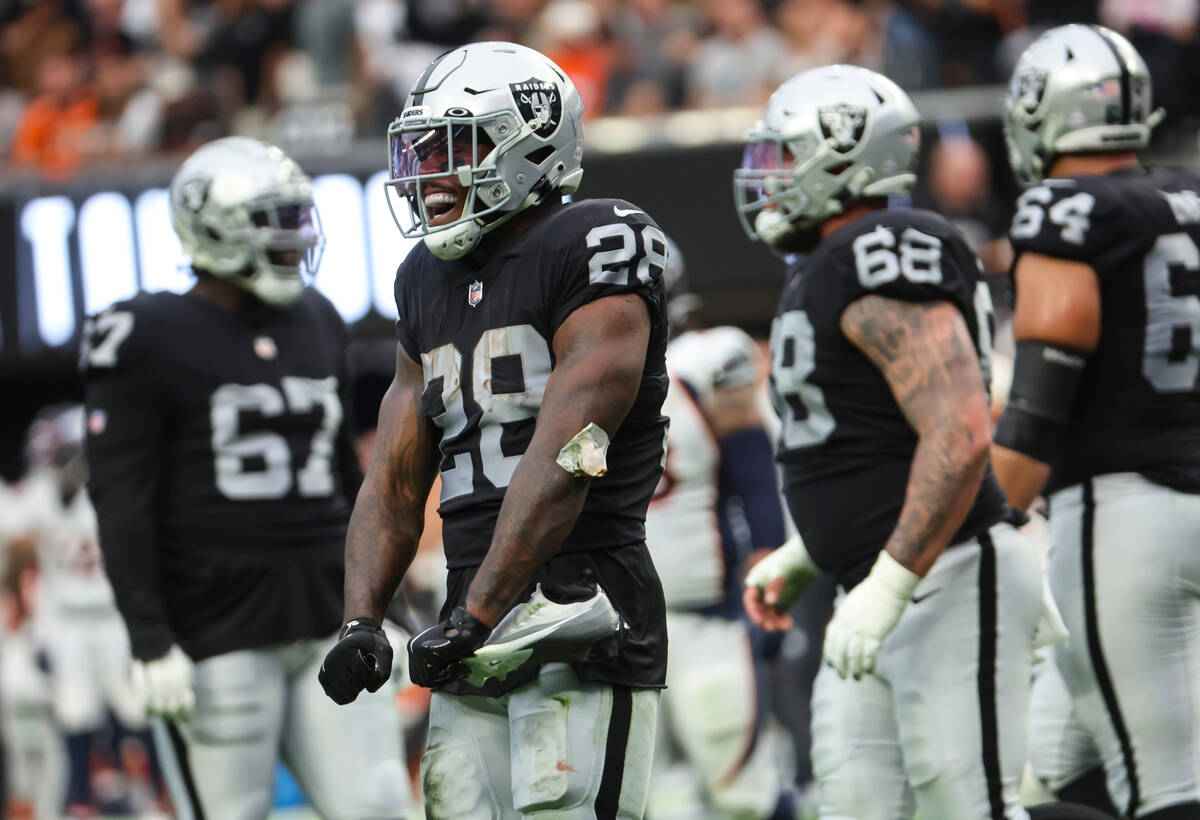 Raiders running back Josh Jacobs (28) reacts after his touchdown against the Denver Broncos during the first half of an NFL game at Allegiant Stadium on Sunday, Oct. 2, 2022, in Las Vegas. (Chase Stevens/Las Vegas Review-Journal) @csstevensphoto 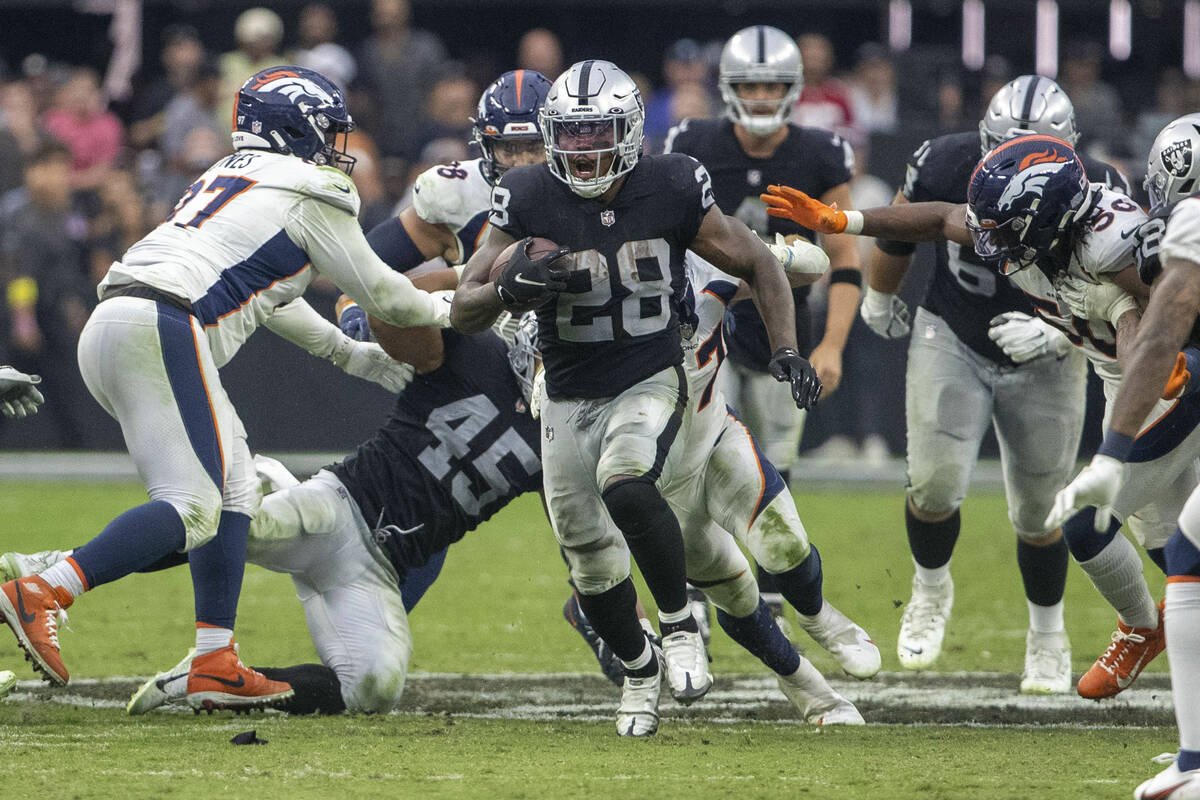 Raiders running back Josh Jacobs (28) runs into Denver Broncos territory during the second half of an NFL game at Allegiant Stadium on Sunday, Oct. 2, 2022, in Las Vegas. (Heidi Fang/Las Vegas Review-Journal) @HeidiFang 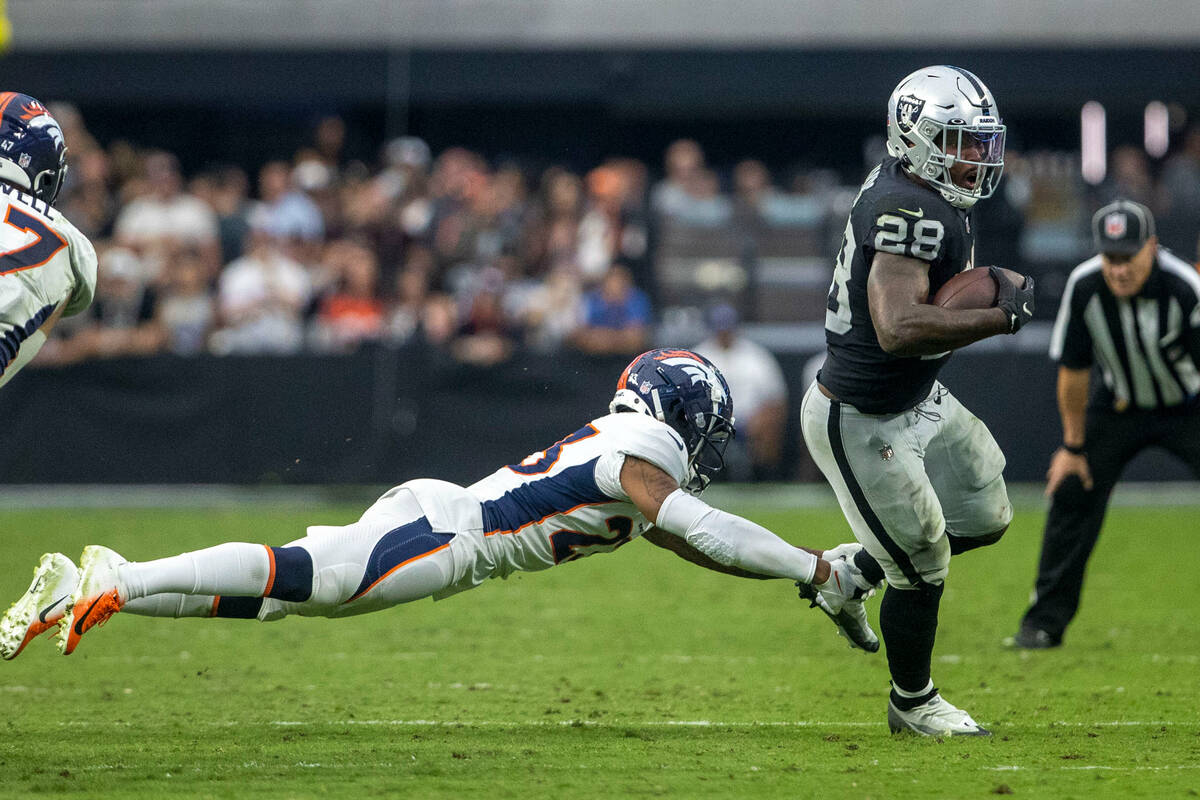 Raiders running back Josh Jacobs (28) shakes off a tackle from Denver Broncos cornerback Ronald Darby (23) during the second half of an NFL game at Allegiant Stadium on Sunday, Oct. 2, 2022, in Las Vegas. (Heidi Fang/Las Vegas Review-Journal) @HeidiFang 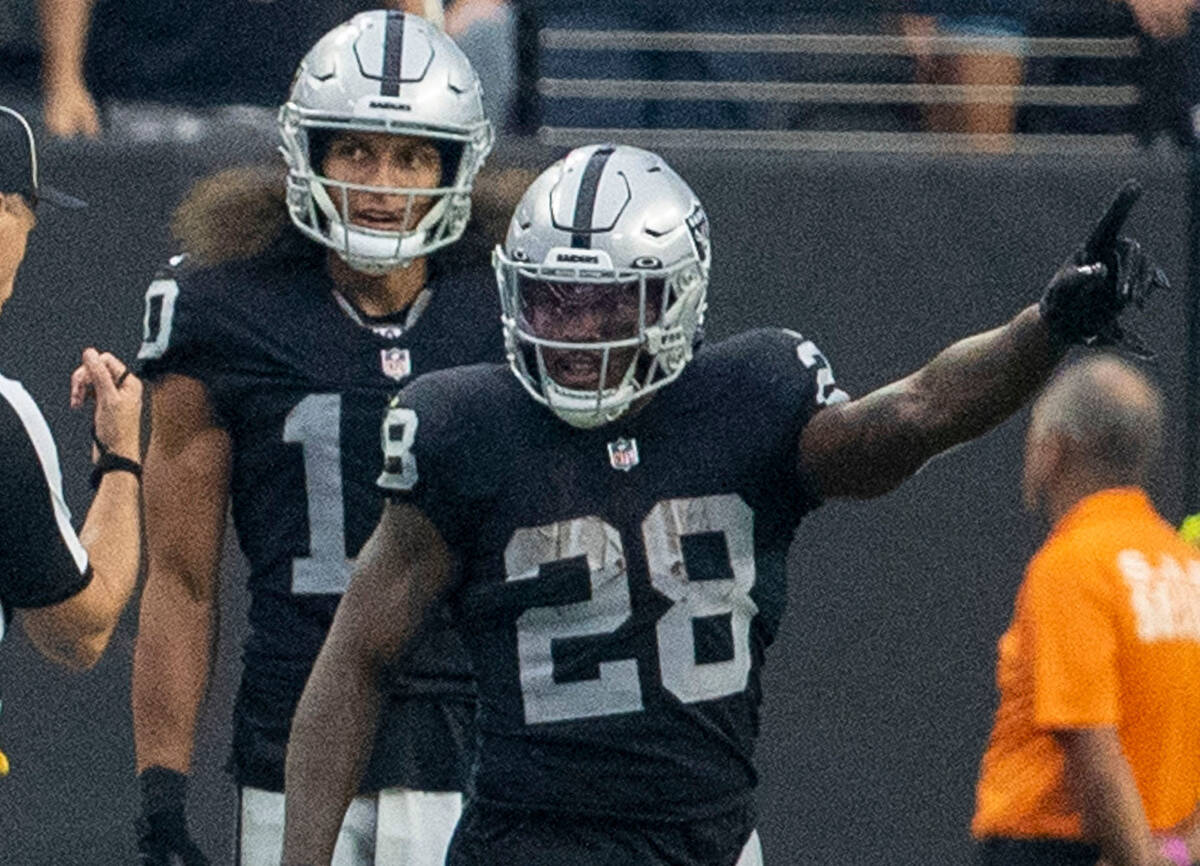 Raiders running back Josh Jacobs (28) signals the for a first down with Raiders wide receiver Mack Hollins (10) looking on during the second half of an NFL game against the Denver Broncos at Allegiant Stadium on Sunday, Oct. 2, 2022, in Las Vegas. (Heidi Fang/Las Vegas Review-Journal) @HeidiFang

Josh Jacobs took the Raiders on his sturdy back Sunday and carried them — literally — to their first win of the season.

Lots of pressure. Lots riding on each of those 28 carries.

The world hasn’t ended. The losing streak is over.

The Raiders would defeat an AFC West rival in Denver 32-23 at Allegiant Stadium, where a virtual sea of orange invaded the home team’s turf like no opposing fan base since the venue began welcoming fans.

But optics can’t tackle Jacobs when he’s going well. So too couldn’t the Broncos.

He would rush for a career-best 144 yards and two touchdowns for a Raiders side that avoided beginning the season 0-4 under new coach Josh McDaniels.

Jacobs was the one leaned on in the most critical of times. When a play absolutely needed to be made. When those haunting images of three previous defeats in the fourth quarter began sifting through their collective minds.

“You cherish these moments,” Jacobs said. “Coming off three losses — all the work we put in this week. It feels good to get rewarded with a win and come out on top at the end of a game. We’ve been in the same position and didn’t before. So to come together and accomplish the goal we set out to do …”

Denver scored to climb within 25-23 with 7:16 remaining. And, suddenly, thoughts of losses to the Chargers and Cardinals and Titans came rushing back. The Raiders needed to answer with their own scoring drive. Everything depended on it.

Over the next 10 plays, Jacobs would be involved in six of them. He would rush for 23 yards on the drive, culminating with a 7-yard score with just over two minutes left. Ballgame.

I don’t know if traveling 75 yards over 5:14 can save or turn a season, but it was a massive response.

“(Jacobs) is one of the best runners I’ve ever been around,” McDaniels said. “Take that for what it’s worth, but I’ve been around some good ones. He has this great ability to make yards after contact and make yards when there isn’t a whole lot there … He makes good decisions and is taking care of the football. Obviously, that’s important in all of this.”

He’s also the back whom the Raiders chose not to exercise a fifth-year option on this past offseason. The 24th overall pick in the 2019 draft, Jacobs would have been due a salary of around $8 million had the option been picked up.

So this quickly became a prove-it year for him.

McDaniels said he wanted a physical game. Wanted his team to run enough plays — it finished with 74 — that the Broncos would be feeling it late. Worked out just as the coach had hoped. Jacobs just grinded away.

Said center Andre James: “He makes it easy to block for him. Can’t say enough about Josh. It also showed the trust (McDaniels) had in us by calling (the game) that way. Definitely gives us some confidence.”

Jacobs had rushed for just 192 yards on 42 carries (a 4.6 average) and no scores this season before Sunday. His long was for 18. His long against Denver was for 43.

He talked earlier in the week about how he had worked more on his body this past offseason to make sure it could better withstand the hits and rigors of NFL life.

“I was telling (running back Zamir White), ‘Man, if you get in that shower after and you don’t have any burns or cuts, then it has been a good day,’” Jacobs said. “I feel good. I went out there and did what I needed to do.

“I told everyone, ‘Today is going to be our day. I’m going to set the tone for everybody.’”

The losing streak is over. Josh Jacobs and his sturdy back made sure of it.

Even quieted a sea of orange in the process.