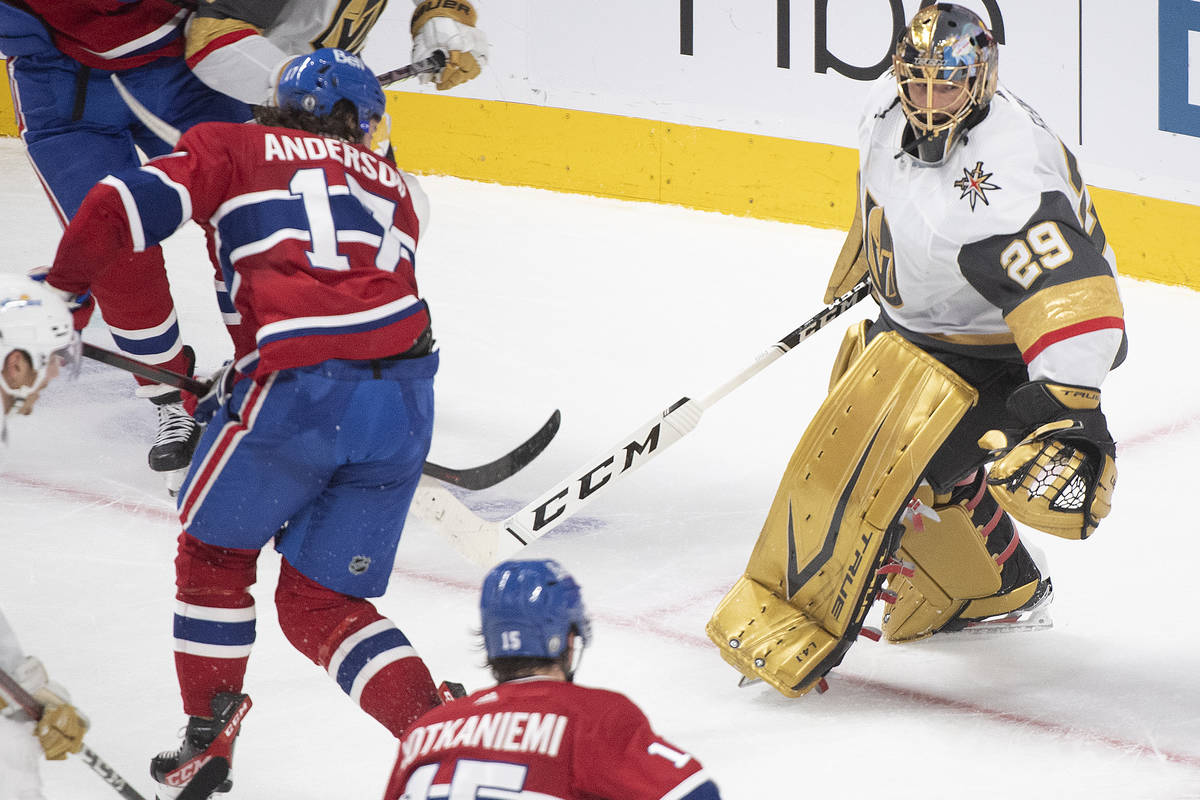 It is magnified because of what he represents to the franchise. In most ways, goaltender Marc-Andre Fleury is the Golden Knights. Their face. Their most popular player by a country mile. Their heart and soul.

But even the most admired is not above making critical mistakes at the worst times. Fleury did so Friday night. How big a mishap it will prove to be depends on the outcome of this Stanley Cup semifinal series against Montreal.

It could make for some good-natured ribbing by teammates should the Knights advance. It could haunt him for a good time should they not. That’s sports. History is full of such gaffes.

The Canadiens lead a best-of-seven series 2-1, with Game 4 scheduled for Sunday night at Bell Centre. They’re also beyond fortunate to own such an advantage.

The Knights led 2-1 on Friday when, with 1:55 remaining in the third period, Fleury misplayed the puck behind his net. It slid away, where Canadiens forward Josh Anderson gathered and scored uncontested.

“I came out to make a play, help the defense like I do every day, every night,” Fleury said Saturday of his third-period miscue. “I’ve got to see the replay again. I don’t know if it spins off my stick or my foot. I don’t have good control of it and lost the puck. When I turned around, it was in the net already.”

This was part fluke. Tricky bounces happen. But he came to move the puck, mishandled it and things went terribly wrong. That’s on him.

“Yeah, it’s part of the game, right?” Fleury said. “I’ve been talking to you guys and being reminded of my screw-ups. I’ve been through this before. Obviously, I wish things were different. It is what it is. Put it behind and get ready for the next game.”

Been through it before is right.

It was at the 2004 world junior championships in Helsinki when Fleury as a member of Team Canada made what was before now his most infamous error.

There were just over five minutes remaining in a tie score of the gold medal game when Patrick O’Sullivan of the United States received a stretch pass.

Fleury left his crease and tried clearing before O’Sullivan could attempt a shot, but the puck instead ricocheted backward off Canadien defenseman Braydon Coburn and into the net.

Fleury is different now. Much older and wiser and able to put into perspective such forgettable moments. He has seen pretty much everything — good and bad — that hockey offers. The Knights also hope he’s more capable of quickly moving on.

In the big picture, Fleury is a Vezina Trophy finalist for the first time, having enjoyed his finest season of a Hall of Fame career. He keeps climbing various all-time lists. It seems a weekly occurrence.

But in the moment, Fleury is simply one whose inability to make a play — along with his team’s ridiculously bad power play and its top six forwards offering zero scoring help — led directly to the Knights now trailing a semifinal series.

“He’s great,” Knights coach Pete DeBoer said when asked Saturday about his goaltender. “I did speak with him this morning and he’s great. We wouldn’t be here without him. You move forward. Short memories.”

They certainly didn’t lose Friday solely because of Fleury, but the spotlight shines brightest on him.

It’s all part of what he means to the Golden Knights. Fair has nothing to do with it.