RJ App
Vegas News, Alerts, ePaper
OPEN
From there, not 15 miles down the road and toward the seaside resort town of Myrtle Beach, stands Socastee High. Such is the distance that separated Hunter Renfrow and Bryan Edwards when both were making names for themselves across prep football fields in and around these parts. (Angus Kelly/Las Vegas Review-Journal) 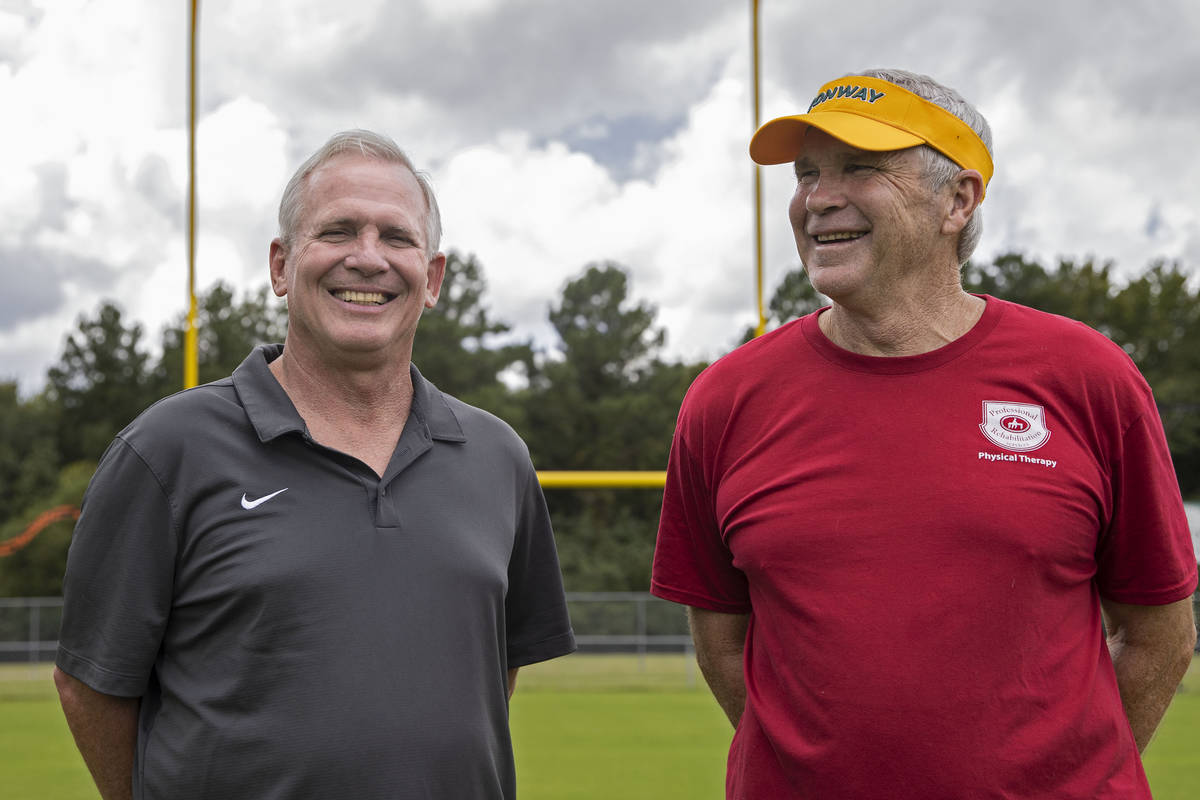 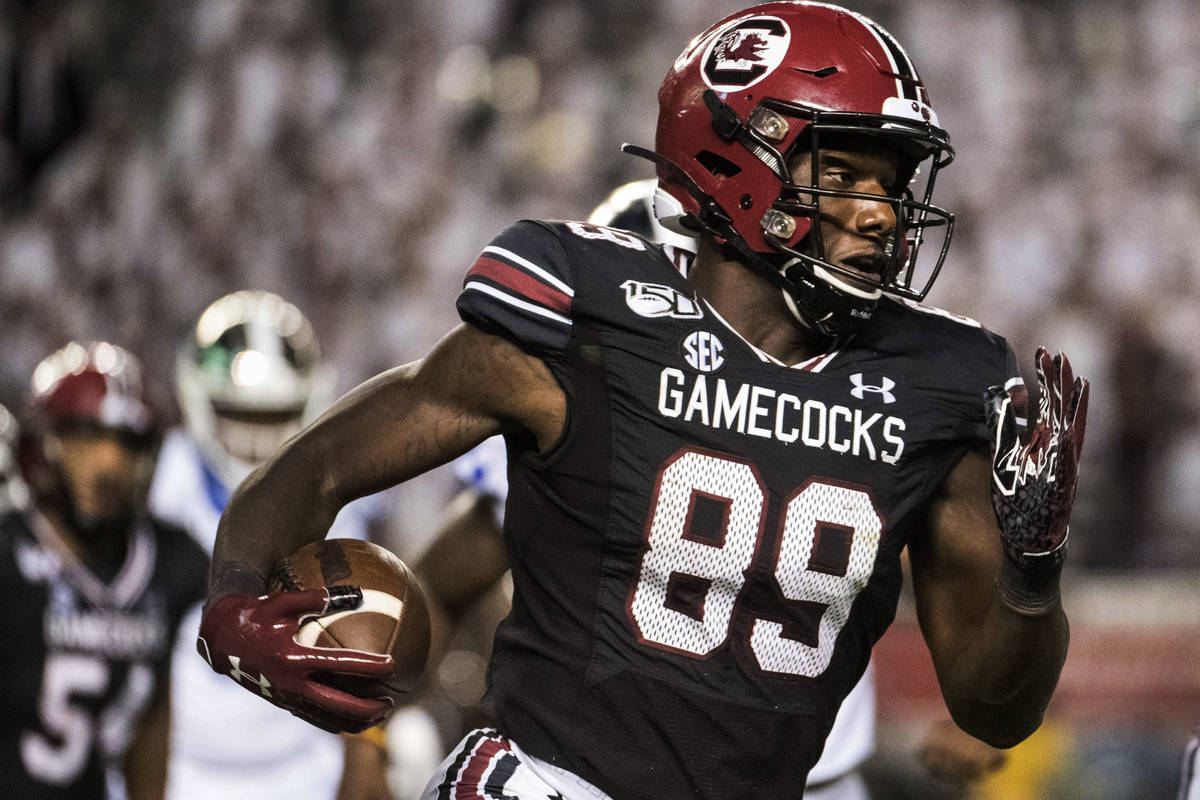 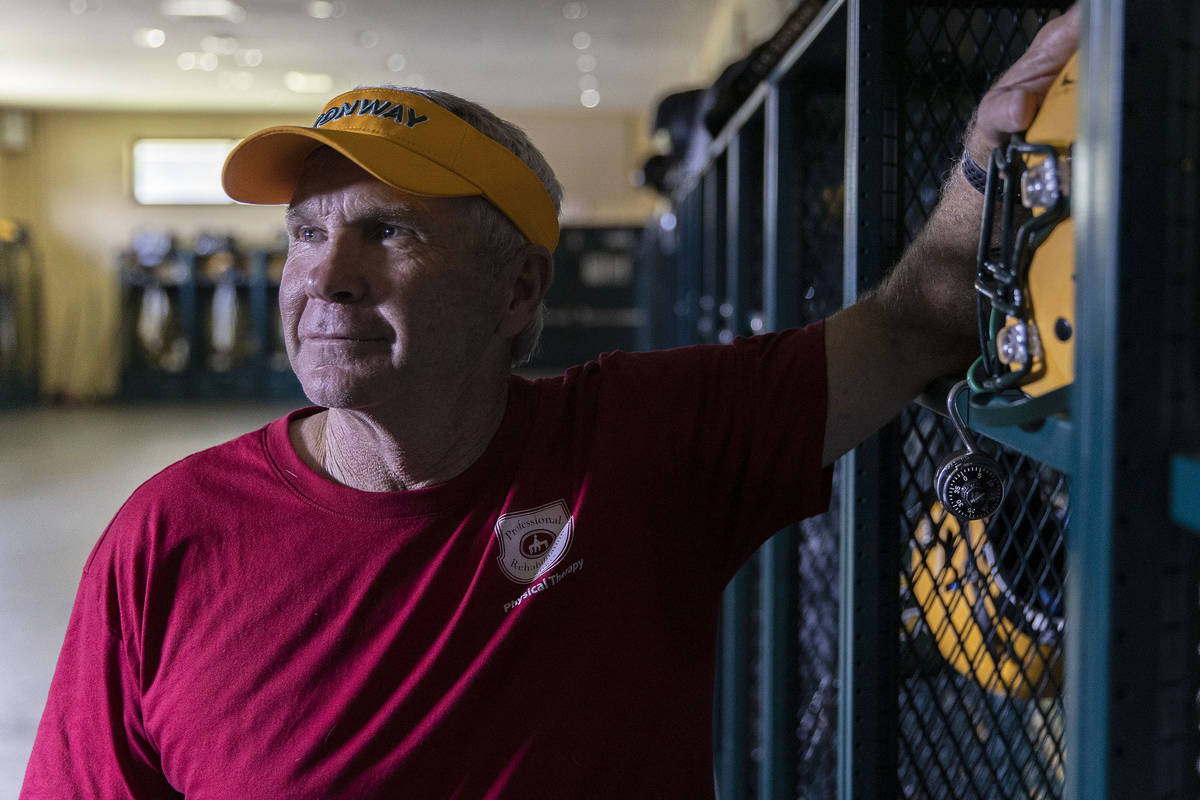 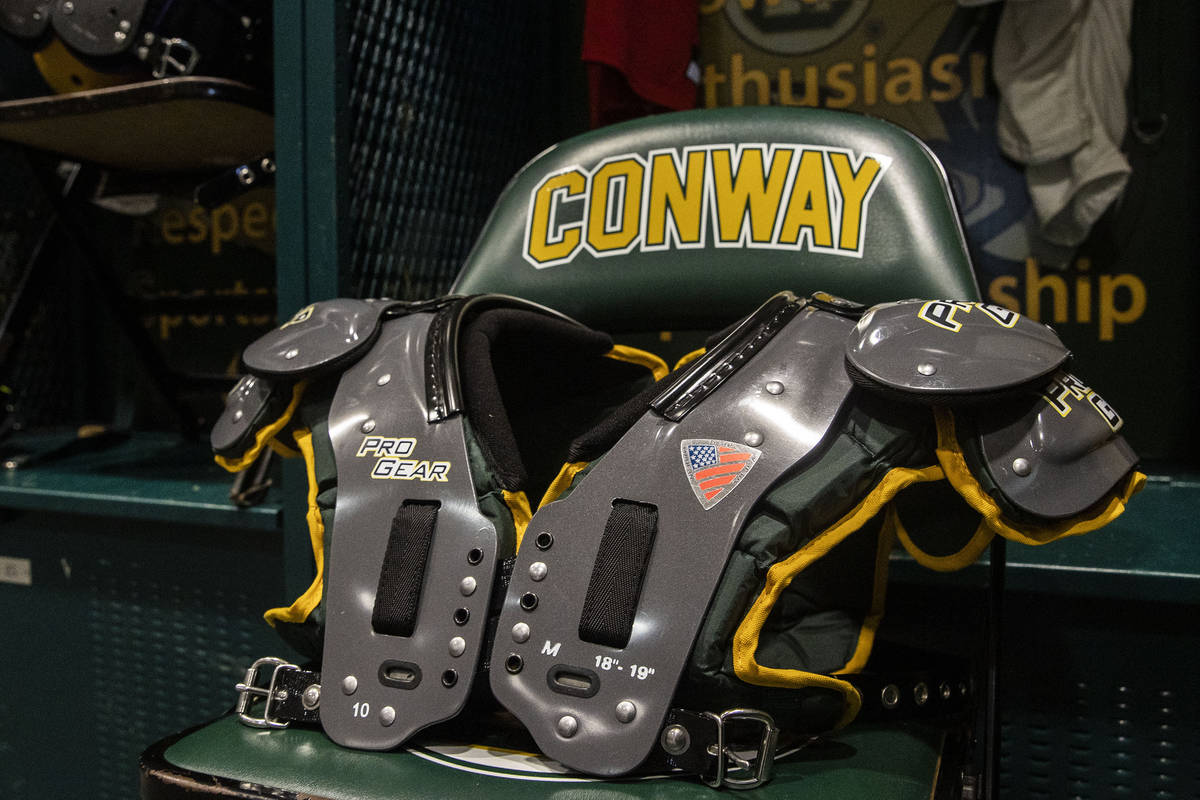 The Conway High School football locker room where Raiders rookie wide receiver Bryan Edwards used to suit up in before games, on Friday, Sept. 11, 2020, in Conway, South Carolina. Edwards, a third round draft pick out of South Carolina, is projected to be a week-one starter for the Raiders. (Benjamin Hager/Las Vegas Review-Journal) @benjaminhphoto 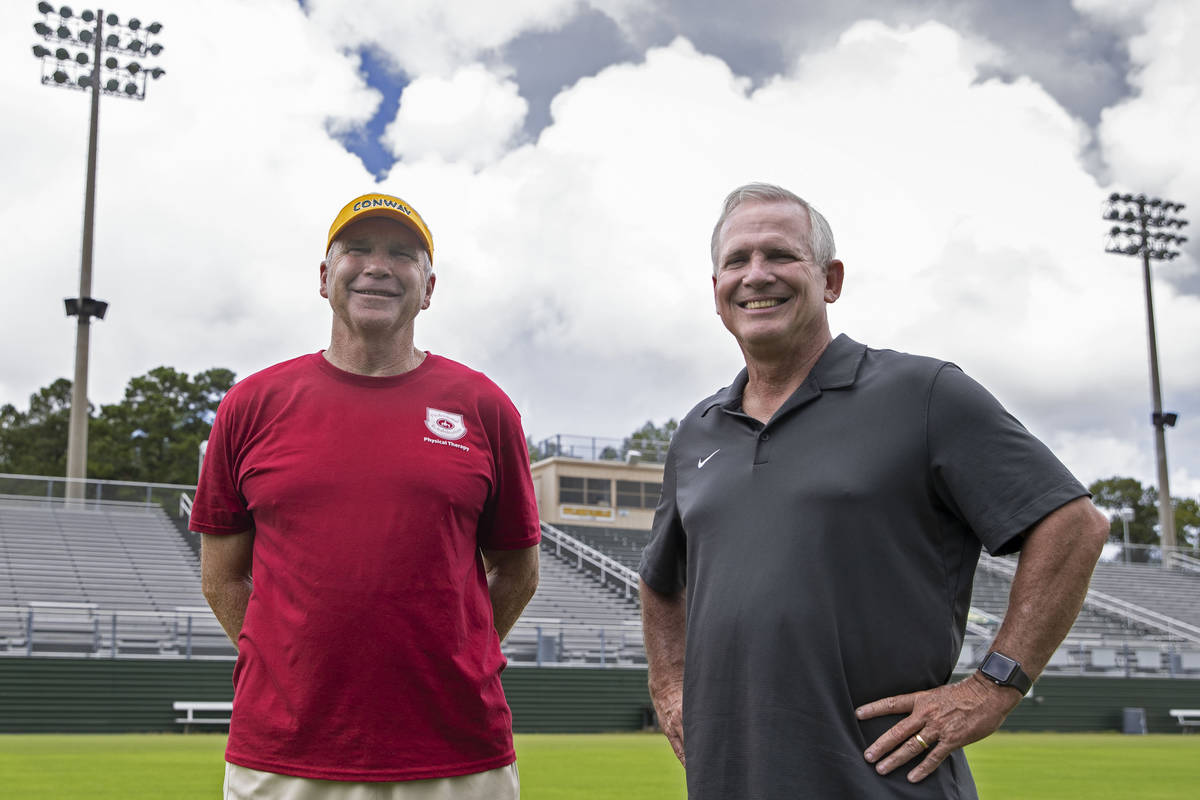 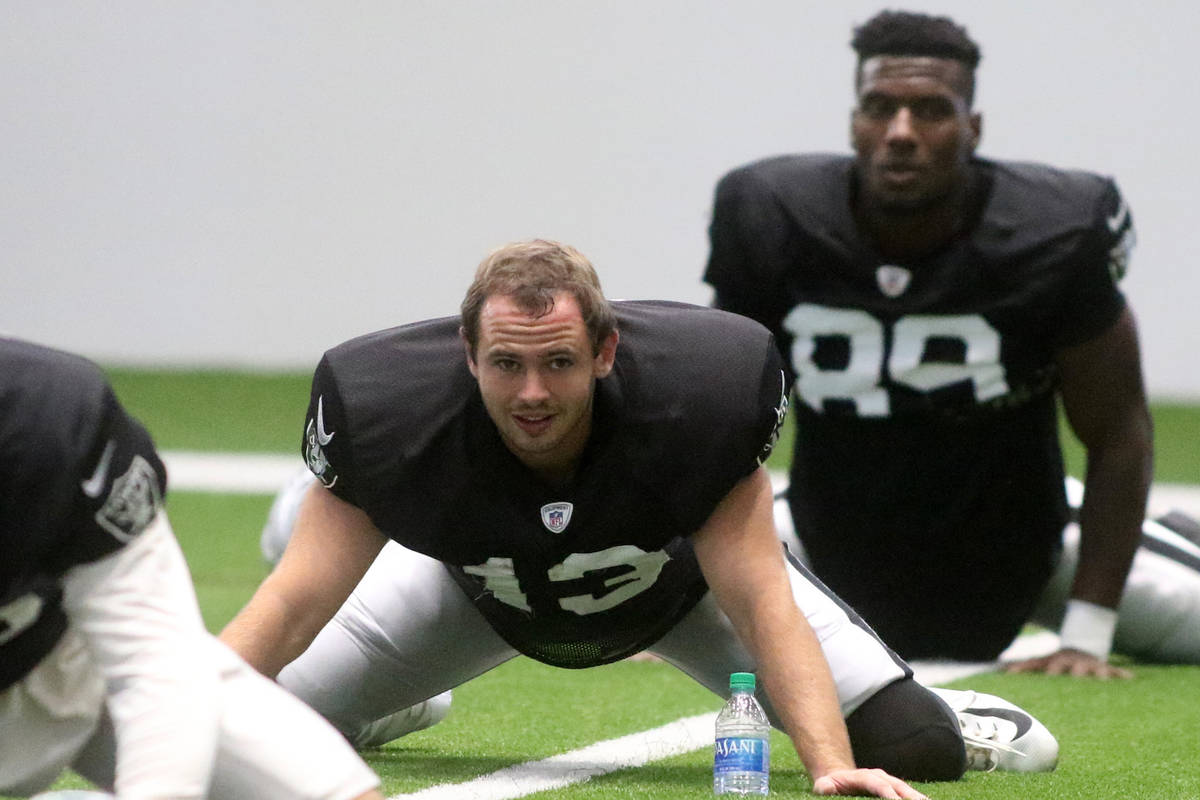 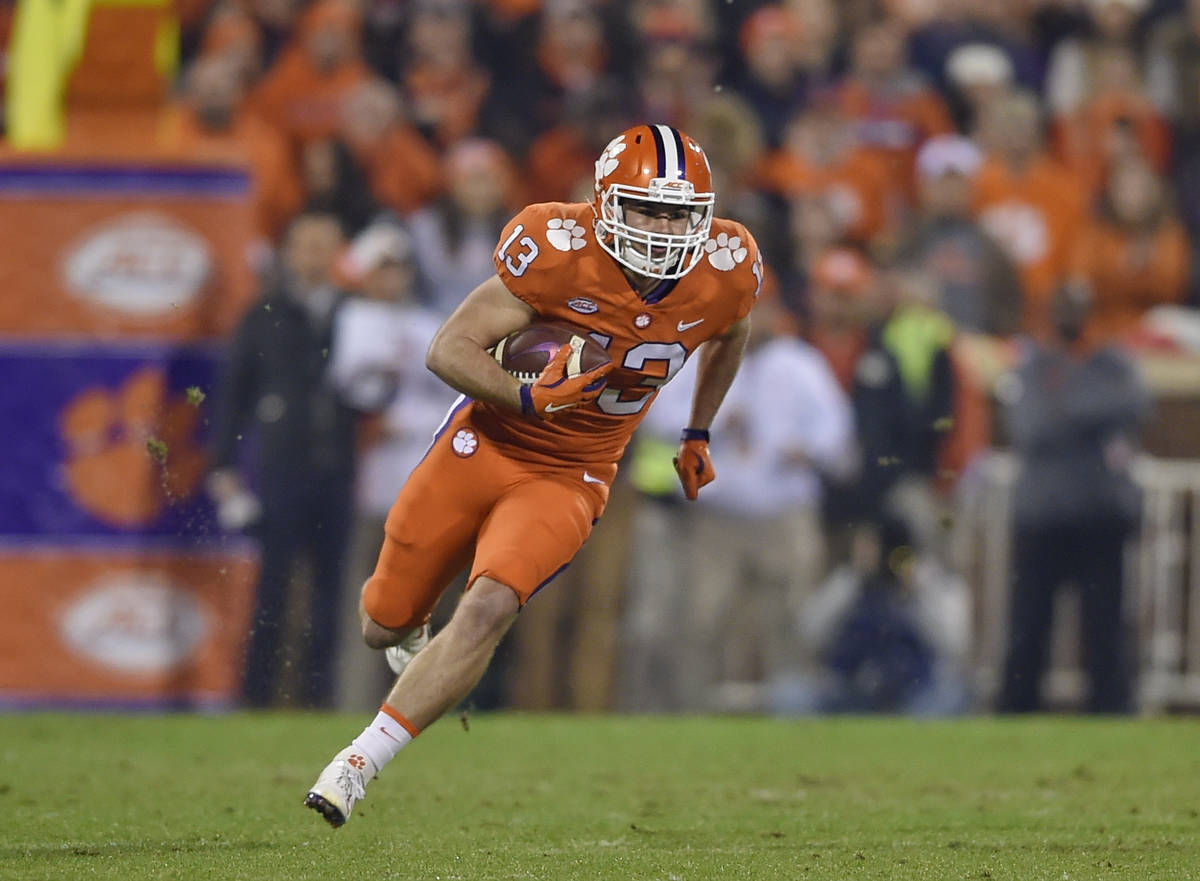 Clemson's Hunter Renfrow runs after a reception during the first half of an NCAA college football game against South Carolina Saturday, Nov. 24, 2018, in Clemson, S.C. Clemson won 56-35. . (AP Photo/Richard Shiro) 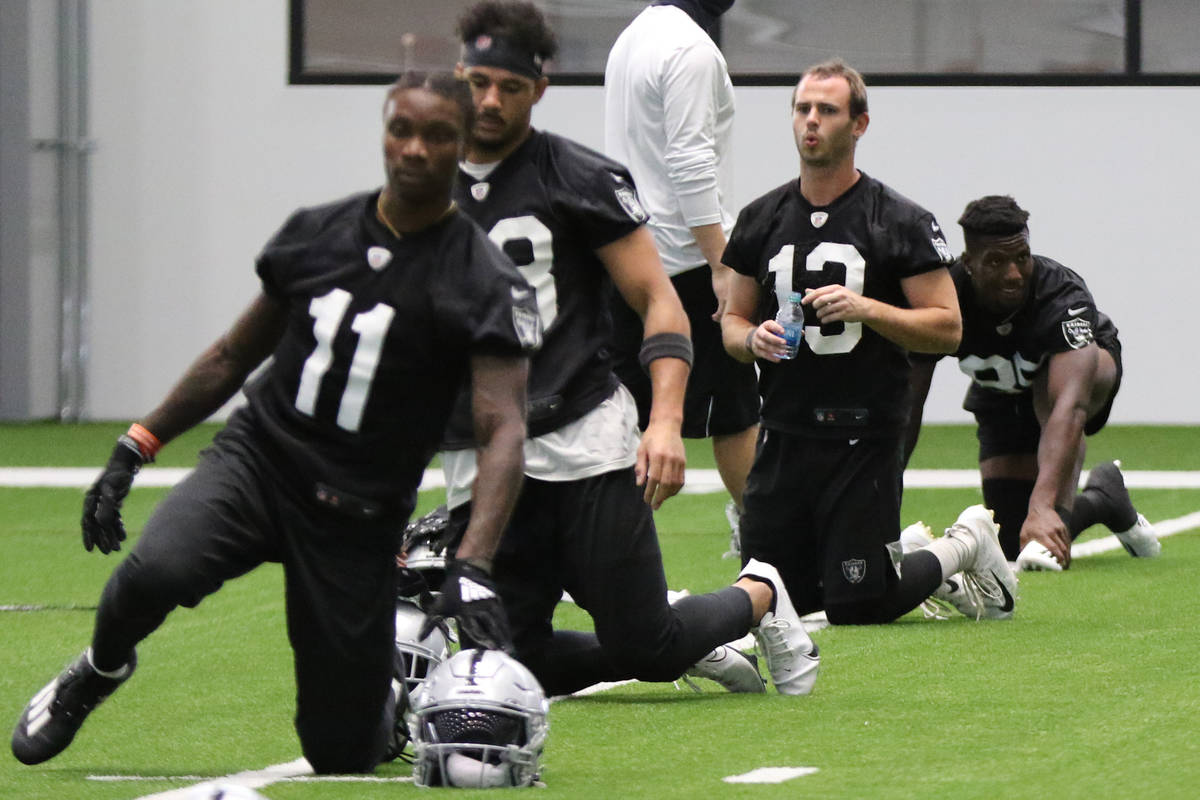 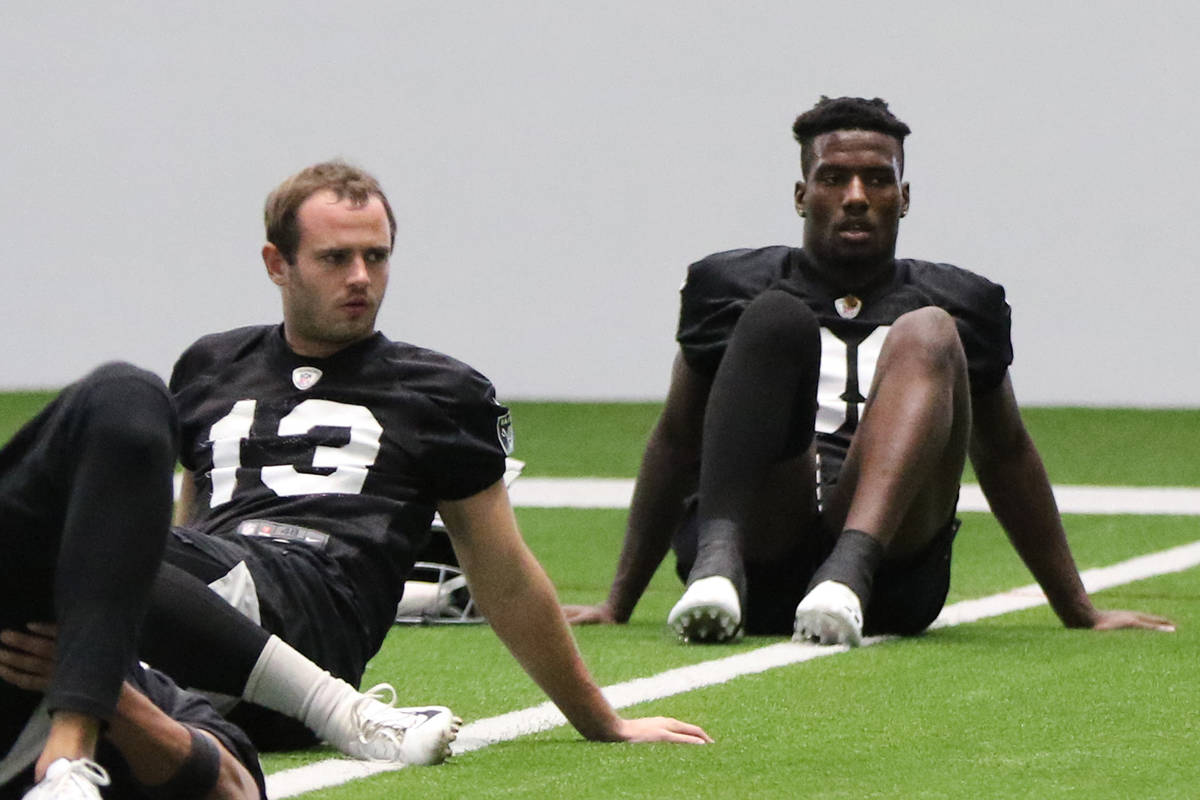 Las Vegas Raiders wide receivers Hunter Renfrow (13) and Bryan Edwards (89) stretch next to each other during a practice session at the team's headquarters in Henderson, Thursday, Sept. 10, 2020. (Heidi Fang/Las Vegas Review-Journal) @HeidiFang 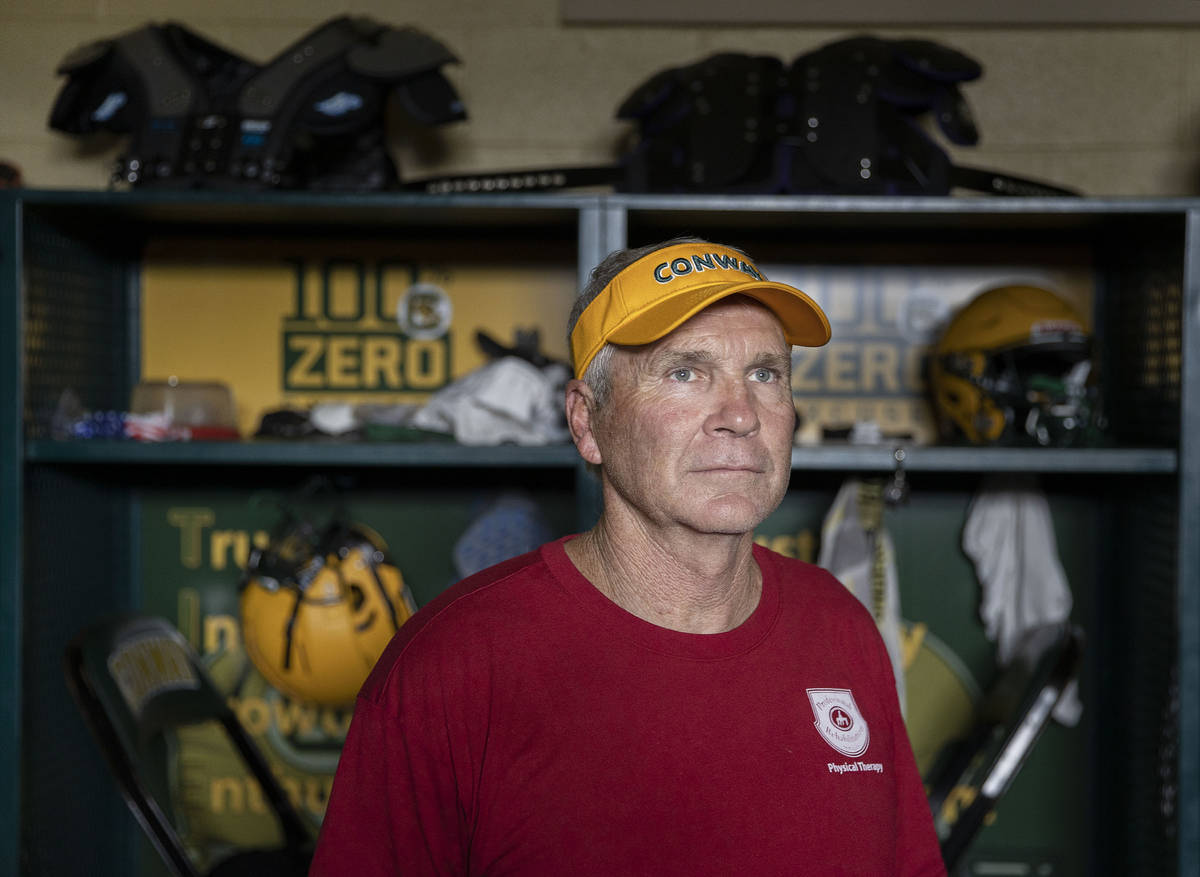 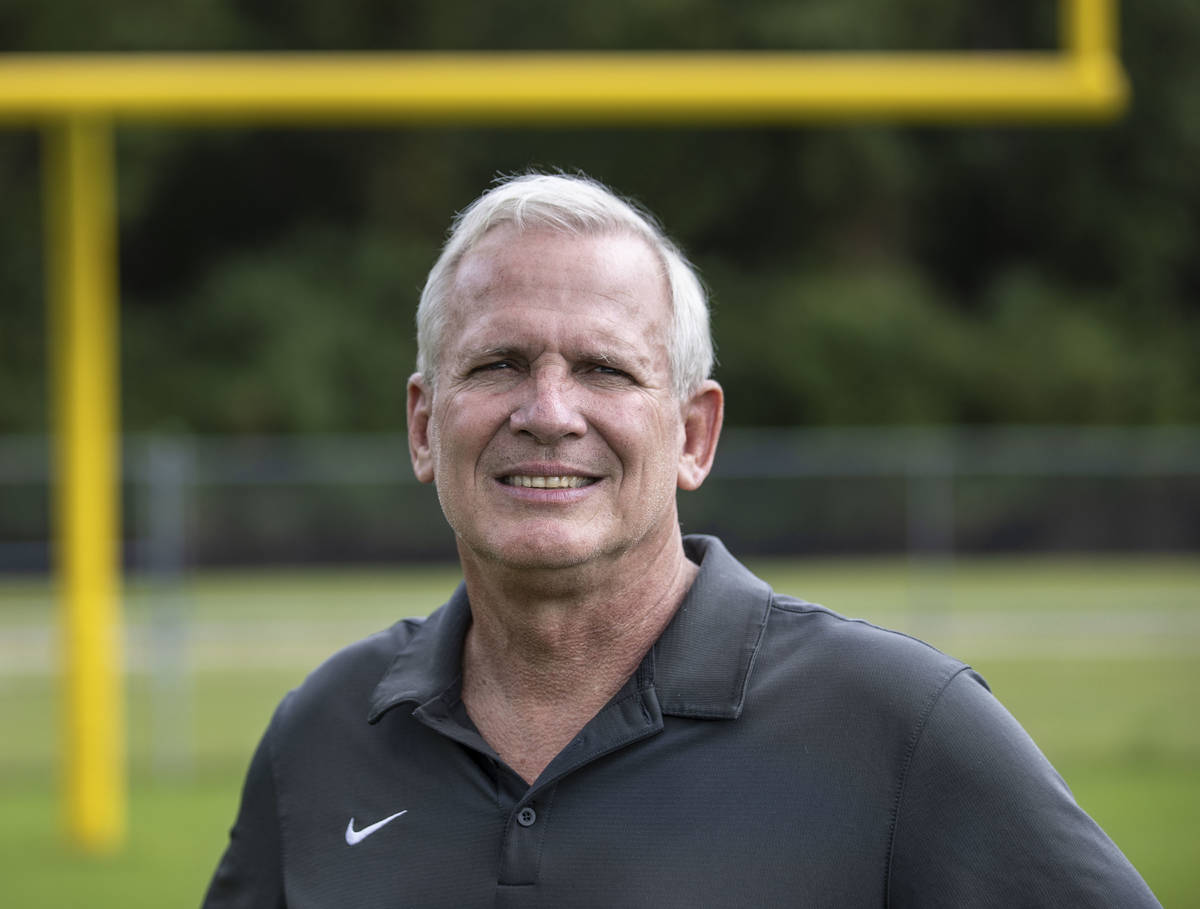 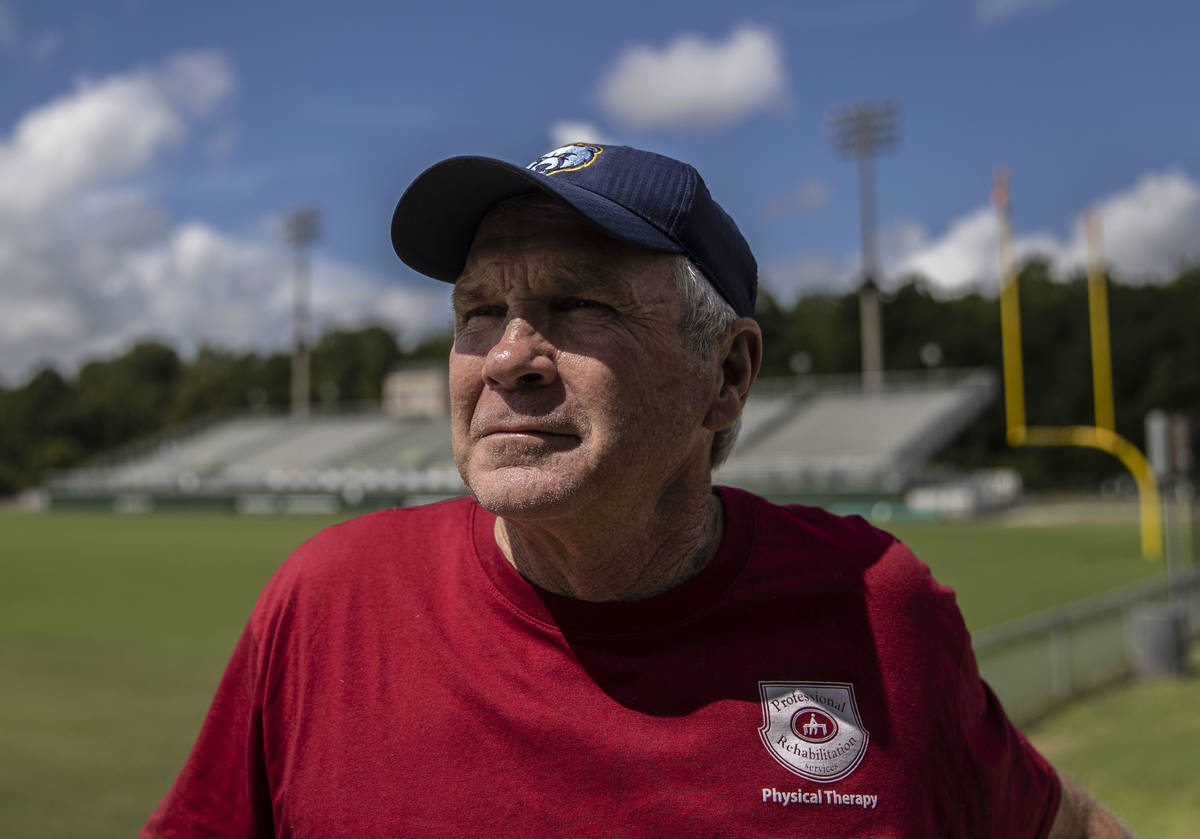 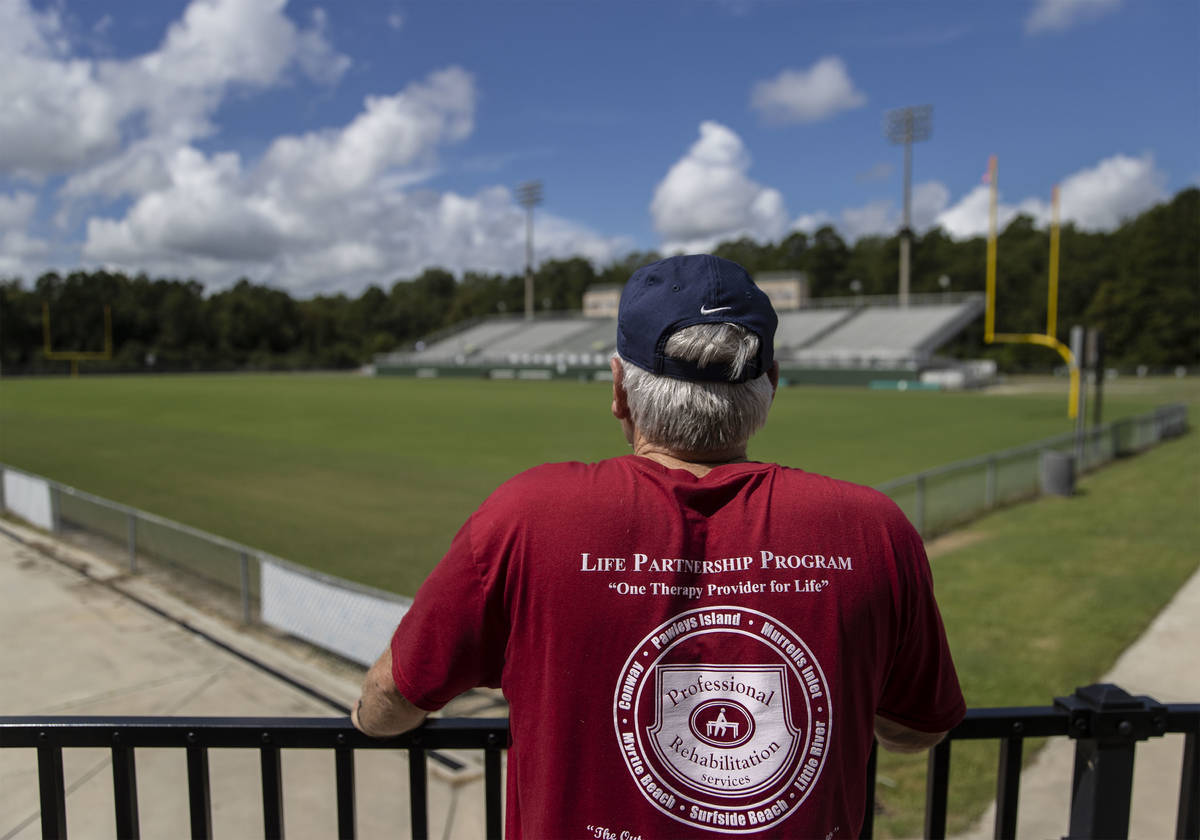 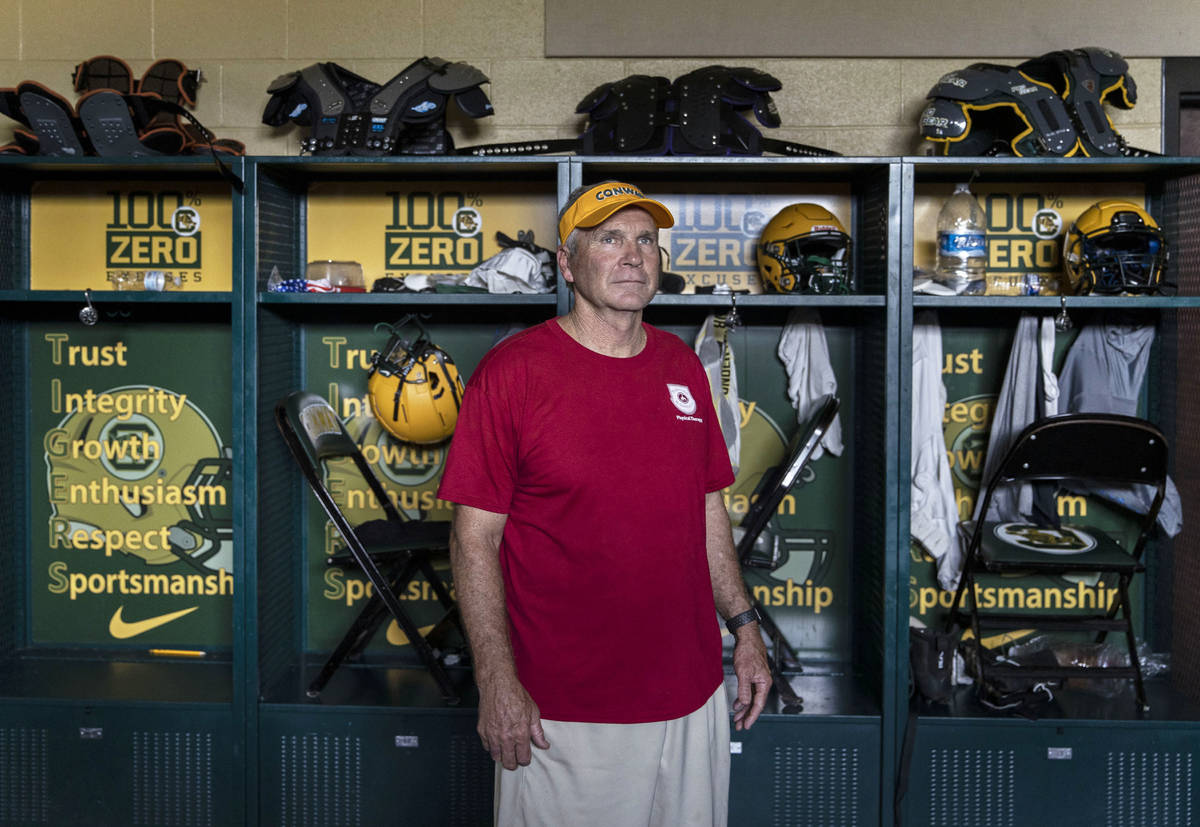 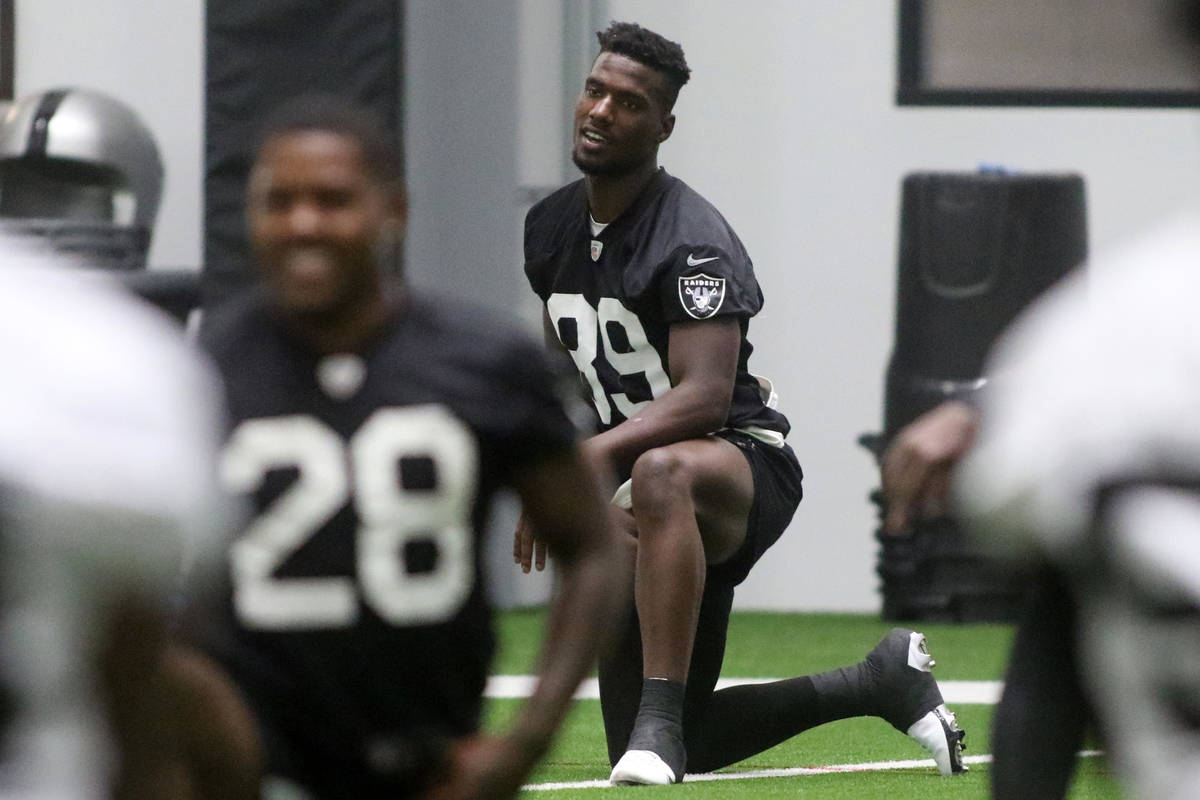 If you turn right out of Conway High and continue on Church Street, past enough fast-food options to feed all of Horry County, a flash of South Carolina lightning beyond the local bank is Highway 544.

From there, not 15 miles down the road and toward the seaside resort town of Myrtle Beach, stands Socastee High. Such is the distance that separated Hunter Renfrow and Bryan Edwards when both were making names for themselves across prep football fields in and around these parts.

But when the Las Vegas Raiders open their season Sunday against the Panthers in Charlotte, N.C., not 170 miles from here, the two players will line up just several yards apart.

And if you think a few kids from this state’s easternmost county both starting as wide receivers for the same NFL team is a whopper of a story, just you wait.

Before the heavens opened on Friday and a light drizzle became one of those violent, short-lived Southern downpours that can drown a football field within minutes, Tim Renfrow and Chuck Jordan recalled how all this came to be.

Renfrow coached his son Hunter, the fourth of sixth children, at Socastee. Jordan coached Edwards at Conway. The tie that binds both players is Jordan’s son, Sawyer, a former Conway player who was Hunter Renfrow’s roommate at Clemson.

“It’s crazy,” said Chuck Jordan, a Hall of Fame coach who led Conway’s program for 34 years before retiring in 2018. “When Bryan got drafted by the Raiders this year, Timmy texted and said, ‘Can you believe it?’ Kids who spent so many nights hanging out together out in each other’s homes along with my son, great friends from this area now on the same NFL team together. It’s so surreal. My wife thinks she raised both of them.”

In many ways, Renfrow and Edwards are described in identical terms. Humble. Quiet. Incredibly competitive. Team first and always. Meticulously focused on the field. Great ball skills. Encourager of teammates while doing whatever is asked of them by coaches.

In so many others, they’re as different as Carolina barbecue sauce is to that of Kansas City.

Hunter Renfrow was always the player thought too small and unassuming to make it. Even after walking on at Clemson and catching the game-winning touchdown pass as a junior against Alabama in the national championship game. Even after being selected by the Raiders in the fifth round of the 2019 draft.

Heck, maybe even after totaling 49 receptions for 605 yards and four touchdowns as a rookie. Five-foot-11, 185 pounds soaking wet once drenched by one of those heavy summer thunderstorms.

Renfrow had several FCS scholarship offers out of Socastee. Appalachian State wanted him like nobody’s business. But he had been all Clemson since first picking up a football. Deep family ties and all.

His mother, Suzanne, went there. So did Jordan, one of three brothers. So did older sister Chelsea. Another brother, Cole, is a student assistant for the Tigers after twice tearing his ACL. Choosing to walk on at a big-time program was just another way for Hunter to prove himself.

“You would see him around in high school with no pads and think, ‘Who is this little squirt?” said Conway head coach Carlton Terry, then the school’s defensive coordinator. “Then the lights came on and he became a monster. He ran right through us, and that was a rare thing for Socastee.”

Edwards at 6-foot-3, 212 pounds and all sorts of athletic, a few years behind Renfrow in school, has been doing that to opponents all his life.

Jordan remembers the phone call. It was from a middle school coach in town.

“He said, ‘I’ve got the best player you will ever coach,’” Jordan said. “I thought, ‘Yeah right.’ We had kids go to Michigan and Oklahoma. Have one at Alabama right now. But then I saw that middle school team play and knew right away. Even then, Bryan was a man among boys.

“Not many kids ever make you say, ‘Wow’ in practice. Bryan did that on a daily basis.”

Swinney initially downplayed the potential of a young man not yet 14. But he appeased Jordan by telling the longtime high school coach and his close friend to send along some film. Swinney said he’d call back in a few weeks when he found the time. He then watched the tape of Edwards. Called back in two hours.

Edwards, whose parents are both retired military, would eventually choose South Carolina. He had been offered by Will Muschamp who, at the time, was the coach at Florida. When Muschmp became an assistant at South Carolina, he offered Edwards again before becoming the Gamecocks’ head coach.

A foot injury his senior year aside, Edwards departed South Carolina its all-time leader in receptions (234), receiving yards (3,045), consecutive games with a catch (48) and second in receiving touchdowns (22).

He was a second-round selection of the Raiders with first-round talent, one of the draft picks obtained by the team in the Khalil Mack trade to Chicago.

Now, with veteran Tyrell Williams lost for the season to a shoulder injury, Edwards will start alongside fellow rookie Henry Ruggs and second-year pro Renfrow on Sunday.

“High school rivals, college rivals and yet Hunter and Bryan have a great respect and love for each other,” Tim Renfrow said. “I’m sure they’re helping each other out even now with the Raiders in Las Vegas. It’s good to see someone you’ve known for such a long time every day.”

And while a football game between Clemson and South Carolina doesn’t quite reach a level of the Populares vs. the Optimates in ancient Rome for mutual hatred, it’s not far off.

Many in South Carolina disagreed the state needed an agricultural school back in 1889, but Clemson was still founded 88 years after what became its archrival. Such planted the seeds of abhorrence.

The schools have played football since 1896 and now for 111 straight years — the second longest consecutive streak next to Minnesota and Wisconsin — and are defined by all the loathing for one another as you would imagine.

But in bowing to the harsh realities of COVID-19, which will prevent Renfrow and Jordan from seeing Hunter and Bryan play in-person on Sunday, and a decision by the Southeastern Conference to play only conference games this season, the in-state matchup won’t be contested for the first time since 1909.

So maybe, for at least three hours each Sunday this football season, two South Carolina natives born 15 miles apart and now competing side-by-side on the same NFL team just might bridge the gap of detest.

“I’m pretty sure if anyone can, it’s Hunter and Bryan,” Jordan said. “Oh, man, it’s a bitter rivalry. Let me tell you … You see, we’re not a very populous state like Georgia, which has so many more college-level players. So that South-Clemson game is everything to people here. But maybe these two players will cause fans from both sides to root for the Raiders.

“After that, they’ll go back to hating each other.”

Tim Renfrow and Chuck Jordan actually played football in state against each other in college, Renfrow an All-American defensive back at then-NIAA Wofford and Hall of Fame member of the program; Jordan played the same position at Presbyterian. Jordan is 63; Renfrow is 59.

They would annually take their sons Hunter and Sawyer, who have been friends since age 5, and other young boys from Horry County on a Fellowship of Christian Athletes retreat in the Black Mountain Range in North Carolina.

In time, Edwards also became a part of all their lives.

“We’re a family of faith and I think that’s what makes Hunter so grounded,” Tim said. “He’s not defined by football. He loves to practice, to play, but it could end next year and he would still be happy and successful. It’s still a game to him. His brothers won’t let him forget where he comes from. They still get after him. Nothing changes when he comes home. None of this has made him any different.

“I see all the same traits in Bryan. Same attitude. Just loves to play. Wants the best for everyone. They’re the same kids as when I would get home at night and they would all be sleeping on the floor.”

A few minutes later, an irate boom of thunder rumbled in the distance and the heavens opened and some of the hardest rain you will ever encounter poured from the sky.

Under an awning while looking out at a field now immersed in water, the tales continued.

“You know,” said Jordan, “I was sitting in the stands when Clemson was driving against Alabama for the national championship. And I told my wife Pat, ‘Hunter is fixing to win this one.” She didn’t believe me. I said, ‘Honey, Alabama isn’t worried about Hunter. They’re worried about all them other guys.’ And sure enough, Hunter makes the catch. My wife went back to claiming him then. But that was always Hunter. Right when you ignore him, he jumps up and gets you.

“That reminds me of a story about Bryan …”