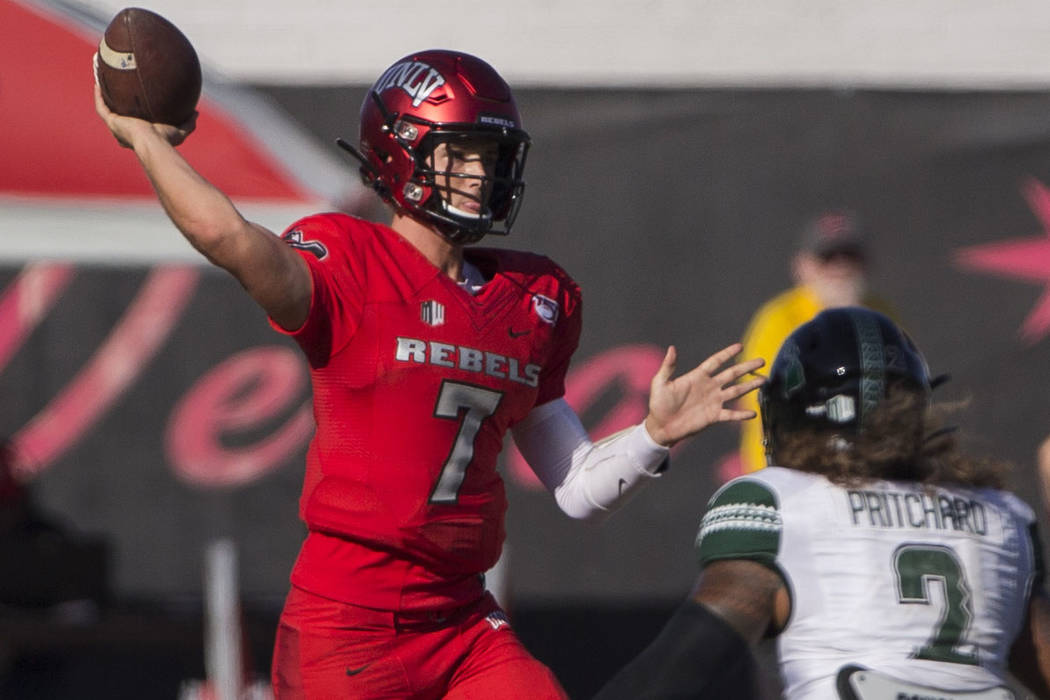 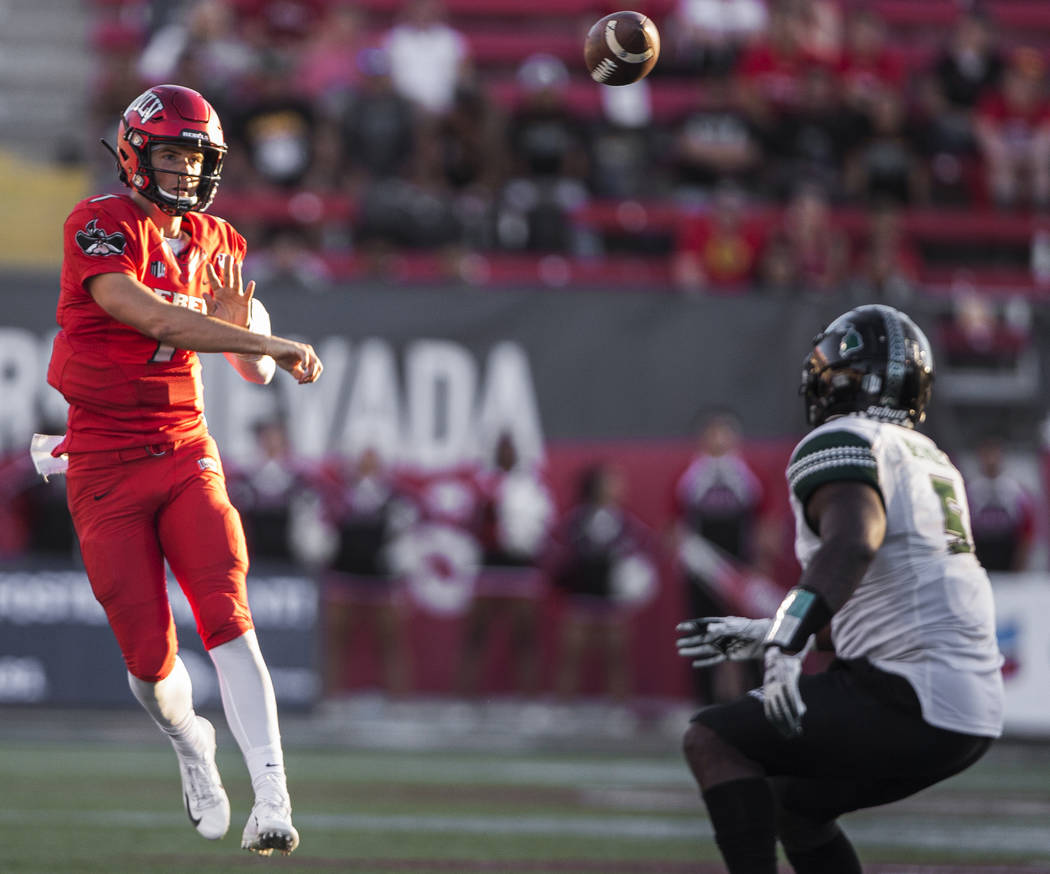 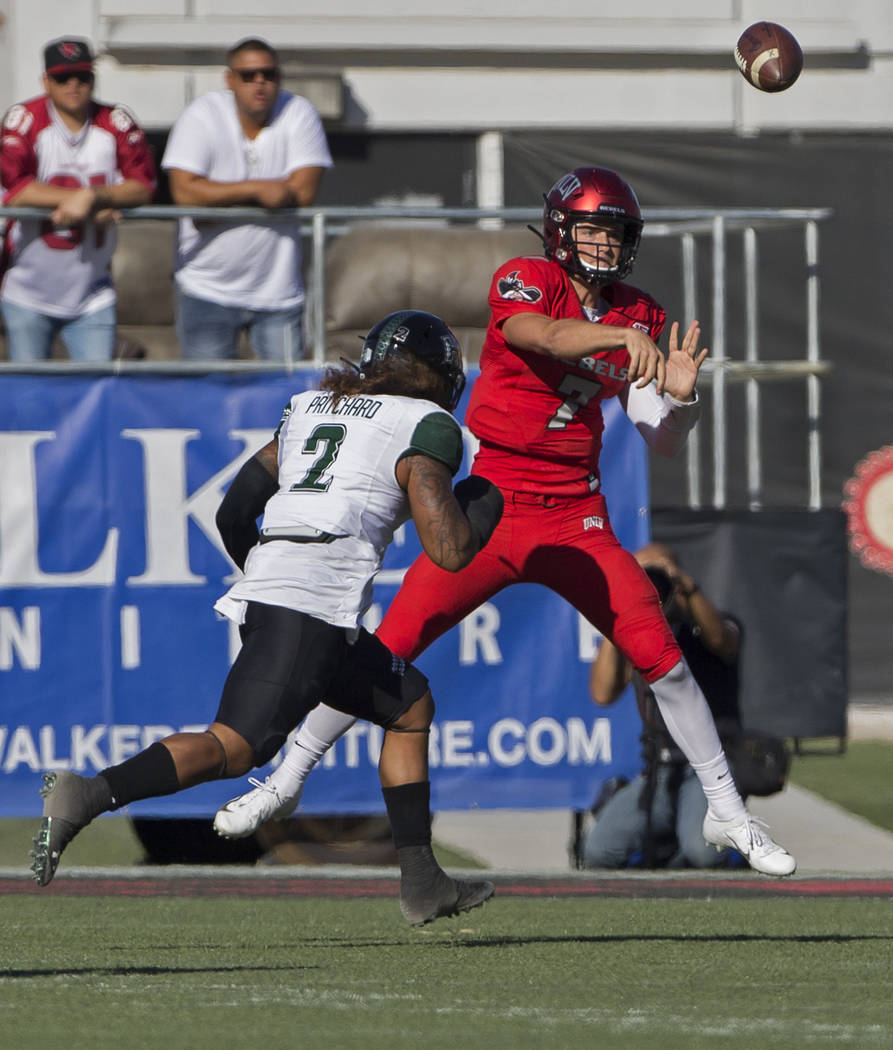 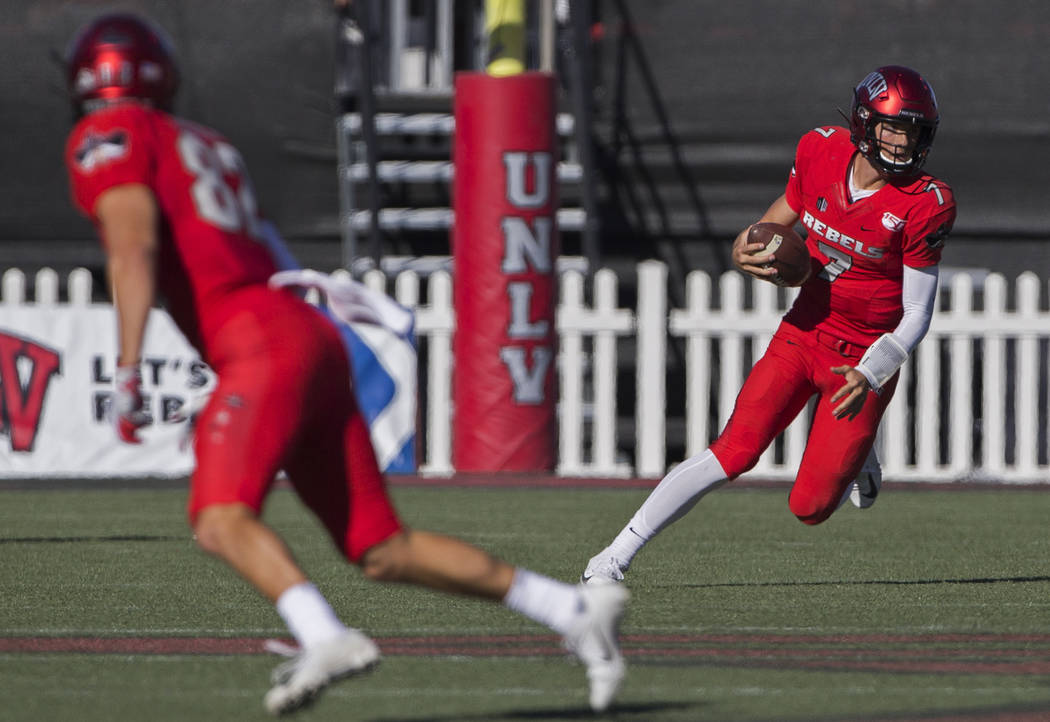 His first mistake, when flushed left from the pocket, was to throw across his body.

His next mistake was to aim a pass at a teammate in the back of the end zone, given there were several opposing defenders between the ball and target.

Kenyon Oblad shouldn’t be attempting it.

The growing pains that are Oblad as UNLV’s starting quarterback continued Saturday, as two second-half interceptions played a major role in a 21-7 loss to Hawaii before an announced homecoming crowd of 21,317 at Sam Boyd Stadium.

On a day when UNLV more than kept in check the Mountain West’s most explosive offense, any opportunity of an upset was erased with youthful decisions from the most important position.

You live and learn to be better another day.

Crazy. The overthrow of an open Randal Grimes that was intercepted and returned 43 yards for a touchdown to give Hawaii a 14-7 lead late in the third quarter isn’t all that worrisome.

It happens every Saturday and, well, Sunday.

But the second pick, coming on third-and-4 from the Hawaii 6, is the sort of play that would most concern a current and perhaps future coaching staff.

Grimes might have seemed open from Summerlin to Reno, but in no way should Oblad have tried fitting a throw through such a maze of white jerseys, not down 21-7 with 6:41 remaining and another down available.

“A learning moment,” Oblad said. “I should have thrown it away. It’s pretty frustrating. The defense played amazing, and we should have rewarded them with better offense. The (interceptions) cost us badly.”

The redshirt freshman was starting his sixth straight game for the Rebels since replacing an injured Armani Rogers, Oblad having arrived to UNLV from Liberty High as the state’s all-time leading passer.

He has had several bright moments — Oblad is just one of two UNLV quarterbacks to throw for at least two touchdowns in five straight games, a streak that ended Saturday — and some not-so-bright ones.

He also hasn’t been helped by teammates, considering the Rebels rank among the nation’s leaders in dropped passes. There were a few more big ones against Hawaii.

They absolutely kill young ones.

And yet there are these moments: Oblad had a wide open Jamaal Neal on UNLV’s second possession — with nothing but open turf in front of the sophomore fullback — and overthrew him by a good 10 yards.

Then, on third-and-8 from the Hawaii 37 early in the third quarter of a 7-7 game, Oblad threw incomplete into tight coverage while never seeing an open Grimes in the end zone.

Oblad completed 10 of 22 passes for 118 yards with a score and the two interceptions, the Rebels falling to 2-8 overall and 0-6 in the conference.

Two games remain in another losing season, and all signs point to a coaching change, meaning a quarterback depth chart that includes several current names and other committed recruits would be seriously evaluated by an incoming staff.

Whether he is UNLV’s future at the position or not, Oblad will be far better for the experience — all the ups and downs, all the solid throws and forgettable ones — he’s now receiving.

He needs more strength on a 6-foot-3-inch, 190-pound frame. The arm is there, and yet a 52 percent completion percentage, even with the drops, isn’t near good enough at this level.

Mostly, he needs to learn from throws such as his final one Saturday.

And not make them.

“Get rid of it and live for a great opportunity on fourth down,” UNLV coach Tony Sanchez said. “It’s about understanding the situation and being calm. I’m a fiery guy, but you have a young quarterback working his tail off and had already thrown a pick six. You have to be careful with how you are with him in the moment.

“Better to sit and watch the film with him and discuss the situation and coach him through it.”