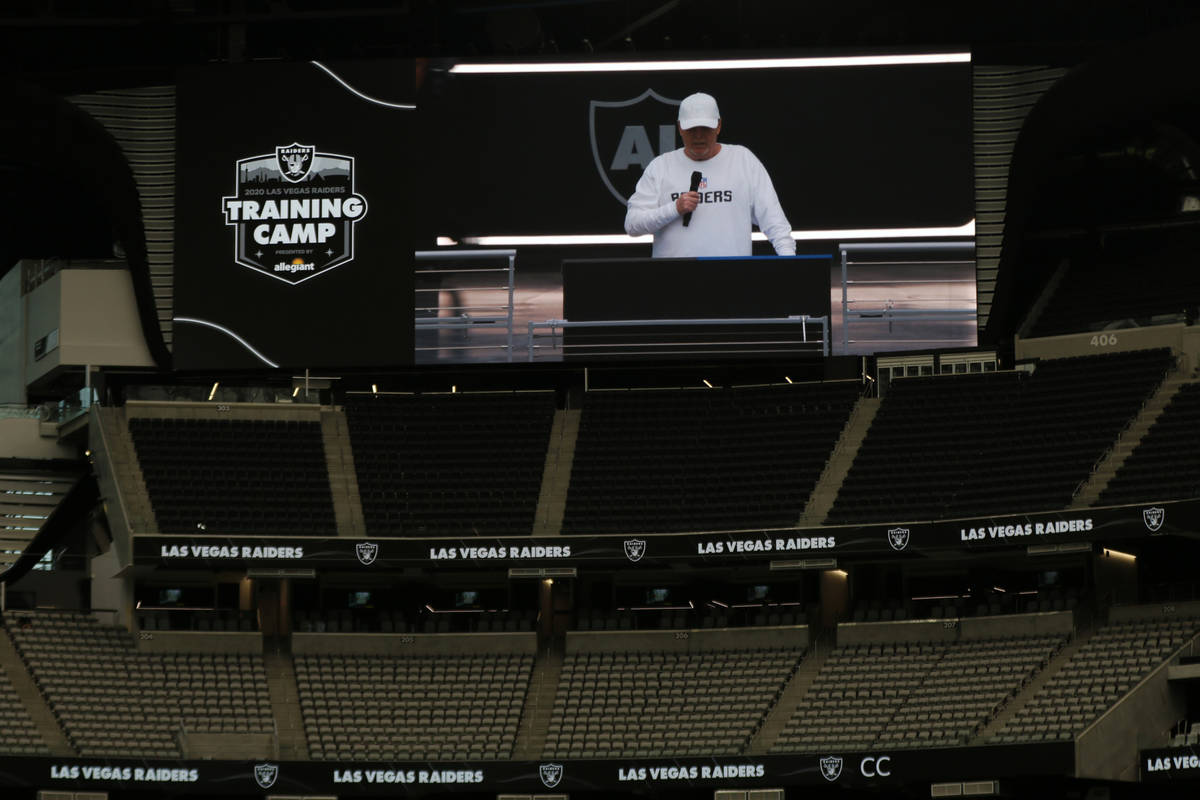 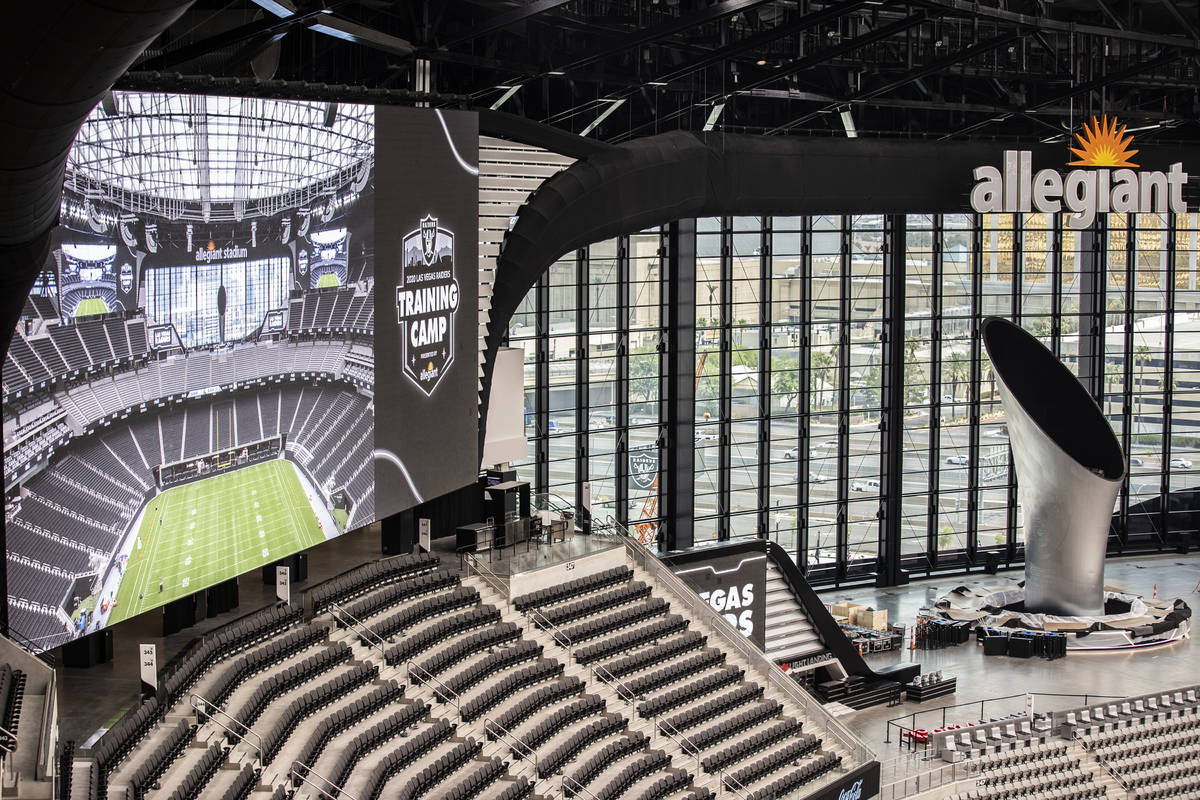 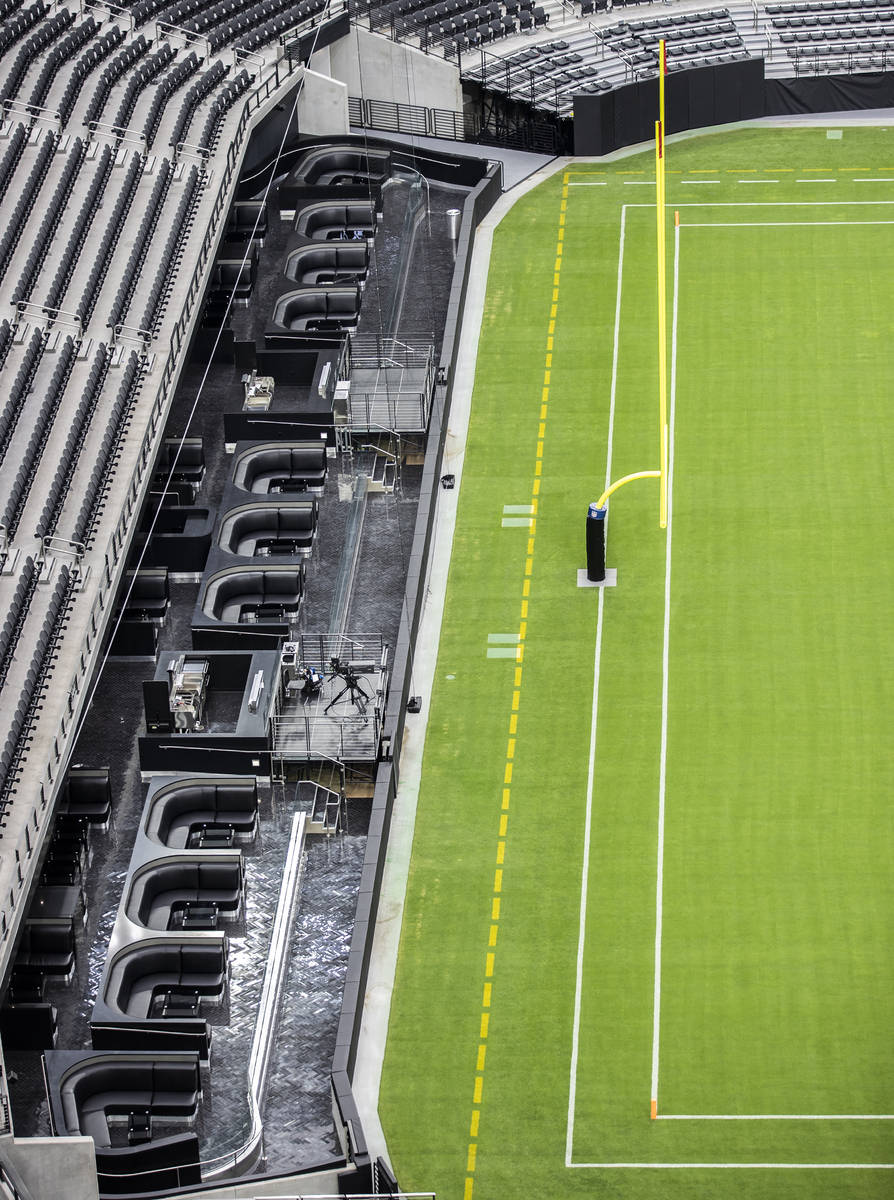 Mark Davis stood not 50 feet from that which honors his father, a memorial torch said to be the world’s largest structure made from a 3D printer.

Davis spoke into a microphone from on high, meaning the Raiders owner was perched on a concourse. He stared down on the grass football field of Allegiant Stadium as his current team looked up.

“So I will leave you with three words, ‘Just Win Baby.’ Welcome home.”

In an impending NFL season where fears regarding COVID-19 will keep fans from attending games at the newest and shiniest of stadiums, the Raiders on Friday tried out their new toy. Practice. Scrimmage. Dress rehearsal for when the Saints visit Sept. 21. It was all of it.

From first glare, Allegiant Stadium is as impressive and illuminating as advertised. Score one for a transparentroof.

Bright is good. The domed stadium offers a fresh, crystal-clear appearance. That’s what hits you most when entering the home to not only the Raiders, but also UNLV football and so many events to come. It’s the shine of it all. It feels like the outdoors — without the ridiculous heat — when indoors. Call this a subtle perk that comes with the $2 billion price tag for a 65,000-seat venue.

Here’s a (really) promising part: It has a very U.S. Bank Stadium feel to it. Makes sense. Mortenson-McCarthy built both Allegiant and the home of the Minnesota Vikings. Las Vegas would do well to have its stadium spoken in the same breath as one located within the Mississippi Flyway. U.S. Bank is among the jewels of the NFL.

Allegiant Stadium has a chance, in time, to be one as well.

“I can’t wait to share this with the city of Vegas and sports fans and entertainment fans from around the world,” Raiders coach Jon Gruden said. “This is a one-of-a-kind joint. We just have to keep pounding this virus into the turf and open these doors so people can enjoy it like we did today. Spectacular. An out-of-sight place. It has everything you can imagine.”

Access in and around Allegiant Stadium was limited Friday as coronavirus protocols took hold in preparing for what should be the most unusual of NFL seasons. So it was difficult to surmise just how comfortable or crowded those concourses might be when fans are actually allowed to walk in them.

It was, however, fairly easy to determine those field-level club seats just behind the north end zone are pretty, pretty swanky.

I’ve always thought views beyond the lanai doors on the north end would play more spectacular at night — as lights across The Strip come alive — and still believe it. Then you add in the adjacent 85-foot Al Davis torch. A striking portrait of brilliance, for sure.

For the moment, the football part of things was incredibly surreal. It has been a minute (or never) since I remember being in such a massive place and actually hearing foot meet ball on a kickoff. There will be piped-in crowd noise and music on game day, well-timed acoustics manipulated to highlight specific moments or plays. They had some of it Friday. It’s just not the same as the real thing.

So if the fire that burns brightest in the Raiders’ organization really is the will to win, such desire this season will occur with a lighted torch emblazoned upon an empty palace.

The idea of which on Friday didn’t seem to trouble a team owner who has vowed not to attend home games until fans can join him.

“Welcome to the Death Star, where our opponent’s dreams come to die,” Davis told his team from on high. “My father always said that the greatness of the Raiders is in its future. Well, today that future really starts. This magnificent stadium was built on the backs of thousands of players, coaches, administrators and fans, who for the past 60 years have proudly worn the Silver and Black.

“The stadium’s personality will be defined by you, so take pride every time you step on this field wearing those famed black jerseys and silver helmets.

“You are the Raiders.”