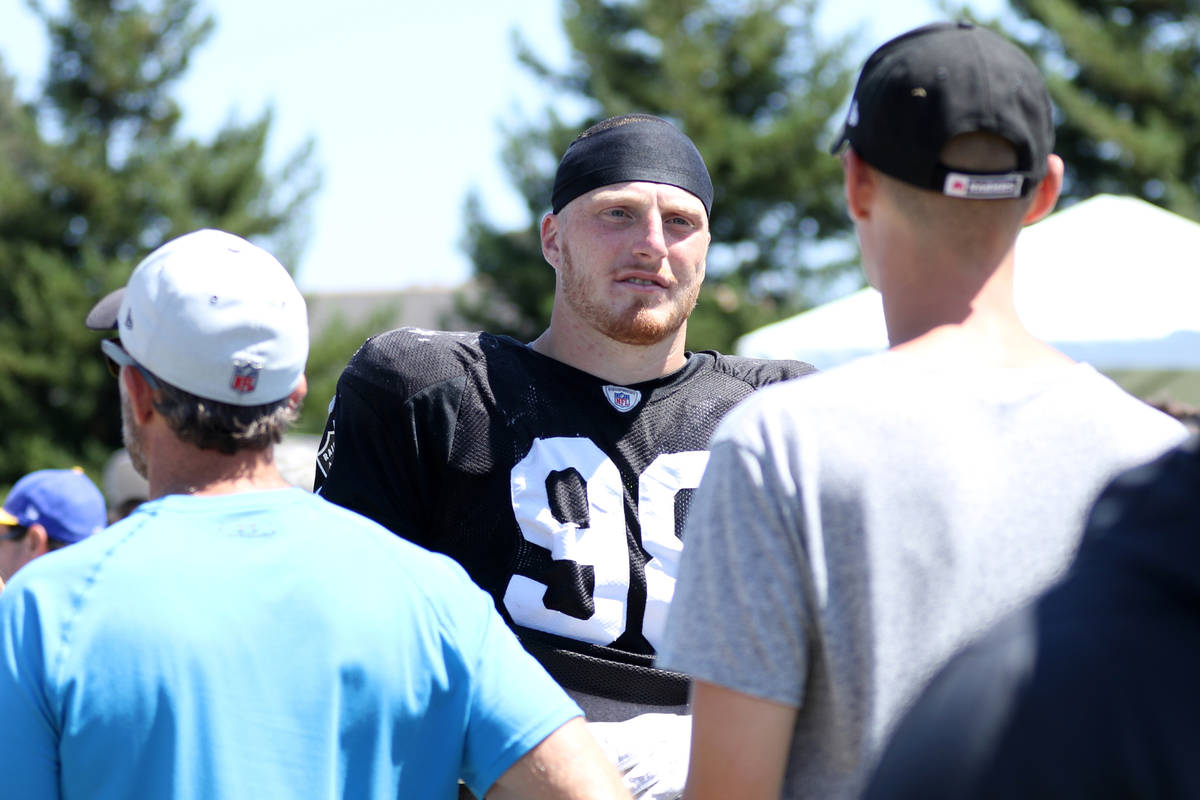 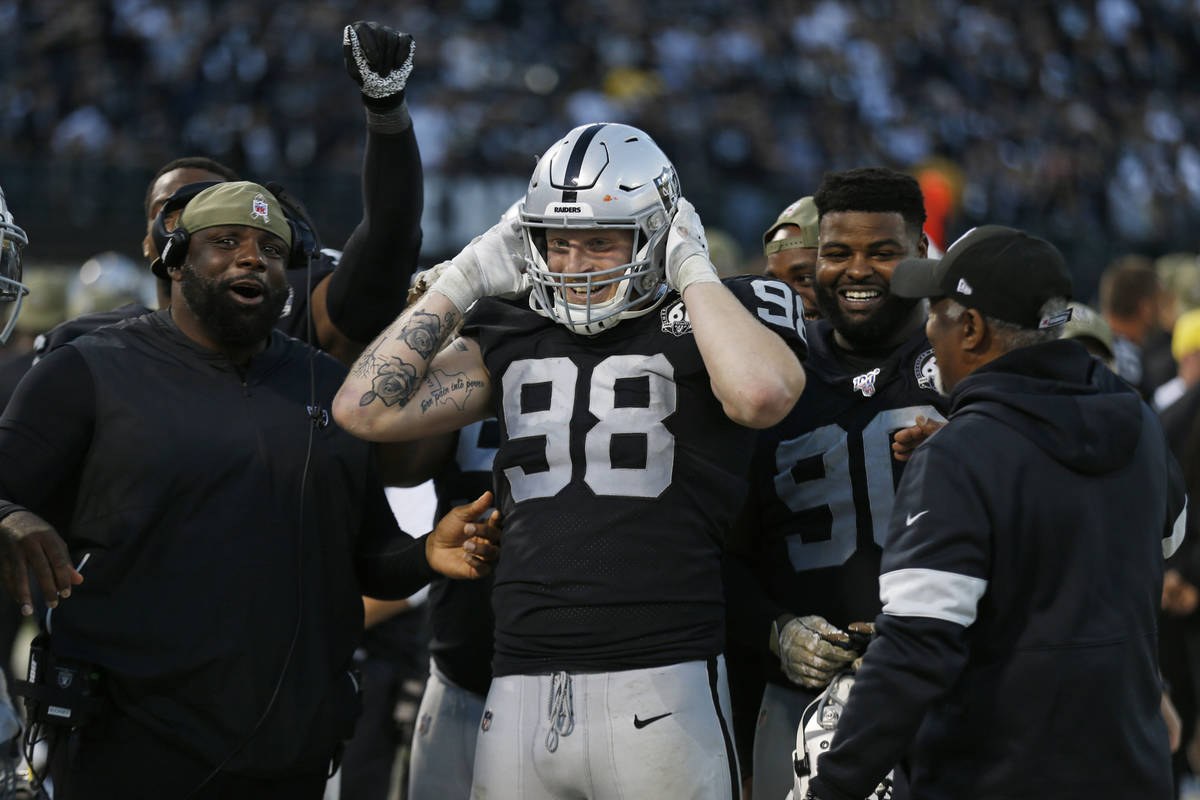 Oakland Raiders defensive end Maxx Crosby (98) on the bench during the second half of an NFL football game against the Cincinnati Bengals in Oakland, Calif., Sunday, Nov. 17, 2019. Oakland won the game 17-10. (AP Photo/D. Ross Cameron) 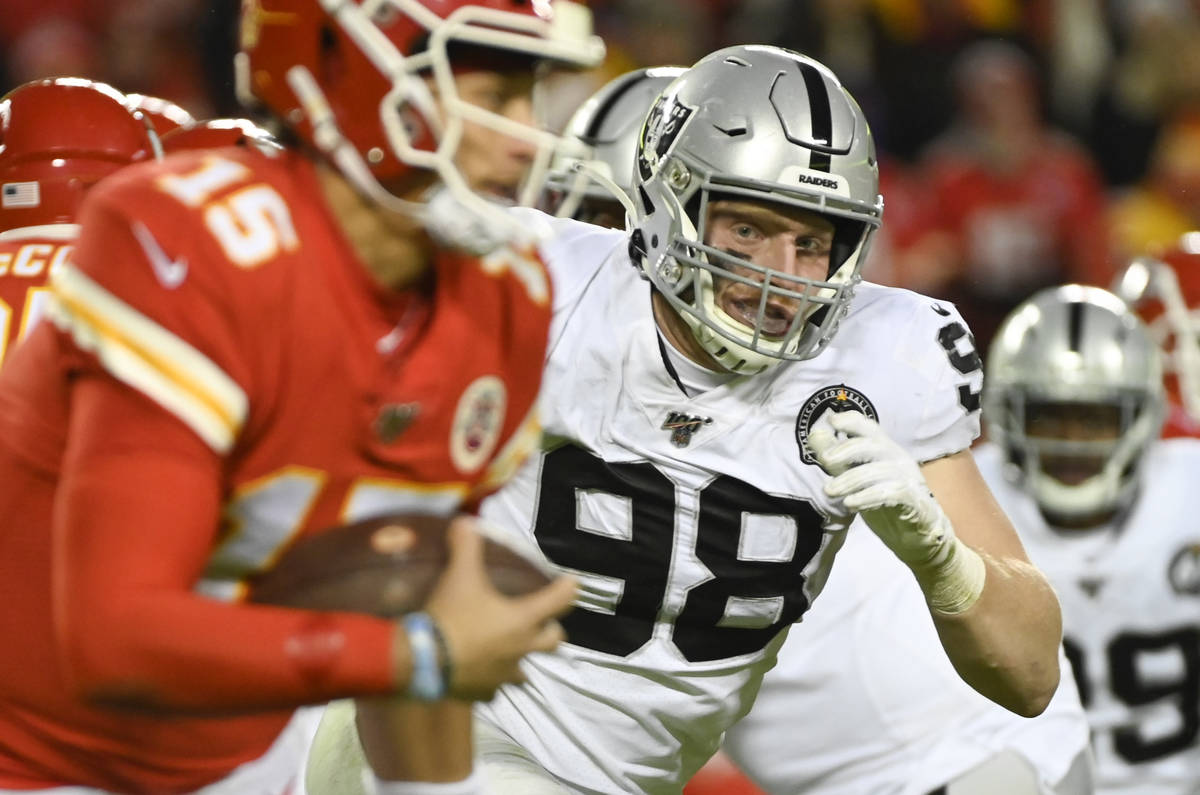 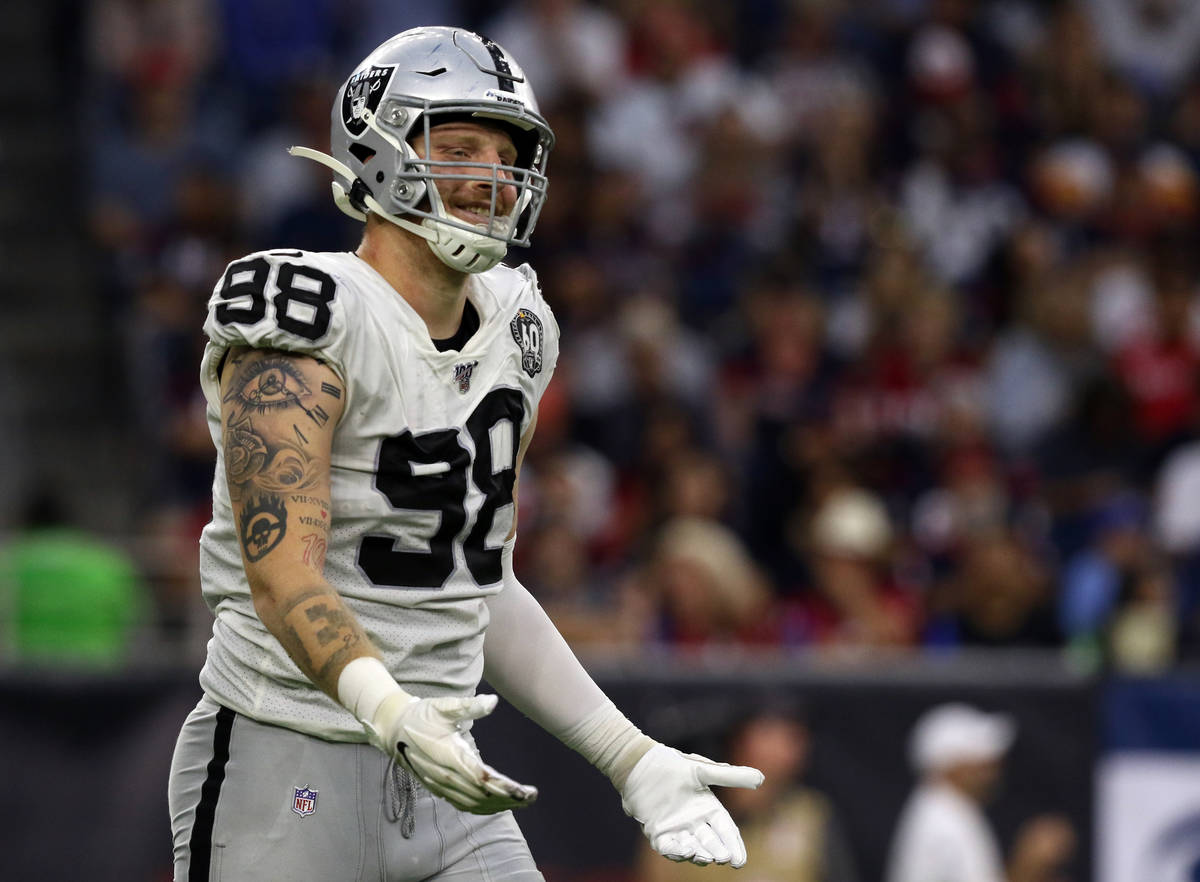 Oakland Raiders defensive end Maxx Crosby (98) gestures after being penalized for roughing the passer during the fourth quarter of an NFL game against the Houston Texans at NRG Stadium in Houston, Texas, Sunday, Oct. 27, 2019. (Heidi Fang /Las Vegas Review-Journal) @HeidiFang

His roots are blue-collar. Sunup to sundown. Dad still rips up floors and lays tiles and handles demolition. Mom is a photographer who worked as a waitress and held three jobs when he was in high school.

And, apparently, a giving spirit.

Crosby is entering just his second NFL season with the Raiders, but has embraced the leaderships qualities one might attach a veteran. He’s new to Las Vegas. Talk about making a mark.

Crosby on Wednesday will host an Athletes Doing Good radiothon to benefit Intermountain Primary Children’s Hospital, part of a foundation that is nationally recognized for transforming health care through high quality and sustainable costs.

As part of the platform, it provides neurosurgery services for children at Sunrise Hospital and Medical Center.

“With everything going on in the world right now, people are struggling and losing jobs and kids are sick and might be in hospitals fighting for their lives,” Crosby said. “It’s not easy financially on them. I’m not going to just sit back and enjoy the life of being an NFL player and having more money than the average American.

“I want to help people out. I’m just excited to be in a position that allows me to do so.”

He had one scholarship offer out of high school, a defensive end from Eastern Michigan whose rookie NFL season produced numbers far above his fourth-round draft placement. Crosby led the Raiders with 10 sacks, second all-time for a rookie in franchise history.

He also accounted for 47 tackles (16 for loss), four forced fumbles and 29 quarterback hurries. For a player it might have originally envisioned a rotational body, a Raiders’ defense that was again woeful in spots discovered a shining piece for the future. Maxx Crosby. Draft steal.

That’s not even the best — or perhaps most important — part.

It’s when he sacked Aaron Rodgers in Green Bay and immediately did the “discount double-check” move made famous by the Packers quarterback. It’s when Crosby was asked in June about Kansas City star Patrick Mahomes and said he was definitely going to sack the quarterback — that he was coming after the AFC West rival’s best player.

Good for Crosby. To heck with that thin line between confidence and arrogance. Have a ton of both.

It might seem ridiculous that a team that went 7-9 in 2019 and has made the playoffs once since 2002 owns such bravado to think it can overtake the Super Bowl champions.

Fact: There is zero chance of it happening without such swagger.

Not belief in the sense that such are things you say only when a camera is on. Or, in today’s world, a zoom chat begins. Instead, believing in a manner that it eats at the extreme depths of your soul. Believing when the world tells you it’s altogether unreasonable to do so.

“I know what we need to beat the Chiefs,” Crosby said. “Well, not the exact formula, but I know how much confidence is important in a locker room. If you ask me if I’m going to get Mahomes, I will say yes every time. I’ve put in the work.

“I want to show all the guys that we can beat anyone. I have no problem being that guy and taking any heat for it. I want to be a leader. I want to set the example.”

He has already taken such an accelerated start off the field in Las Vegas. The 11-hour radiothon will include spots from Raiders players and folks from UNLV and the Golden Knights and Aces.

Funds raised will go toward Intermountain Primary Children’s Hospital and it continuing to provide programs such as music and art therapy, integrative medicine, chaplaincy services, pediatric research and other technologies that improve health outcomes.

The event’s host: A second-year NFL player whose charitable and leadership qualities speak of someone far more advanced in his career.

“I got my work ethic and appreciation for it from my family,” Crosby said. “It’s only right to give back. This whole thing is about raising money for kids and their families. Any donation helps. That’s all we’re looking for. Being able to help means the world to me.”

The Raiders can win big over time with a guy like this. Believe it.