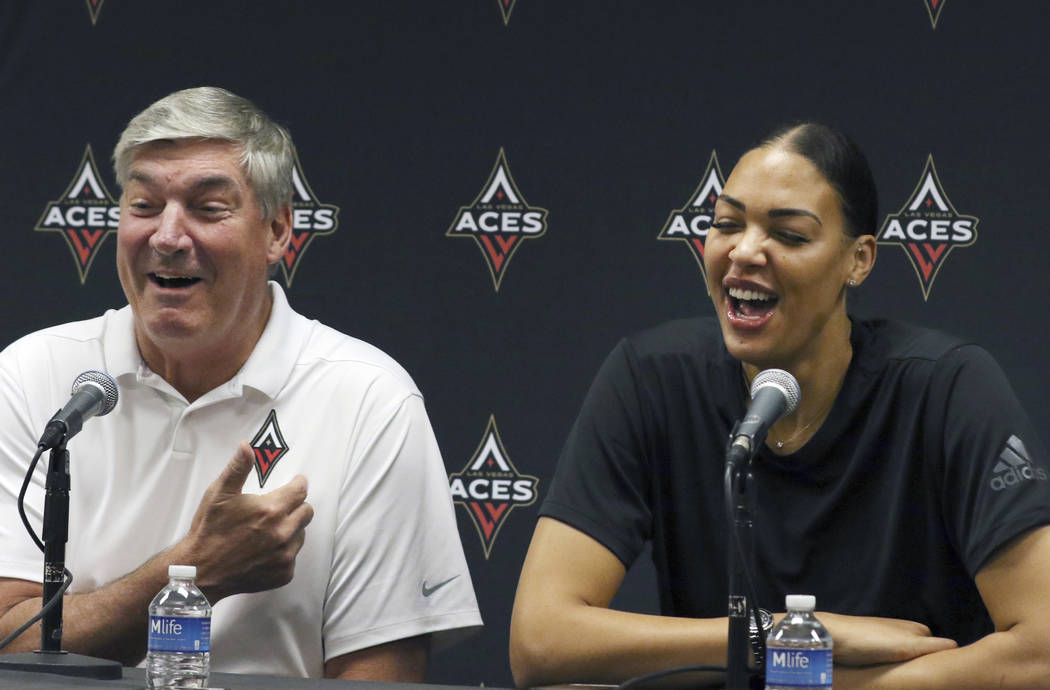 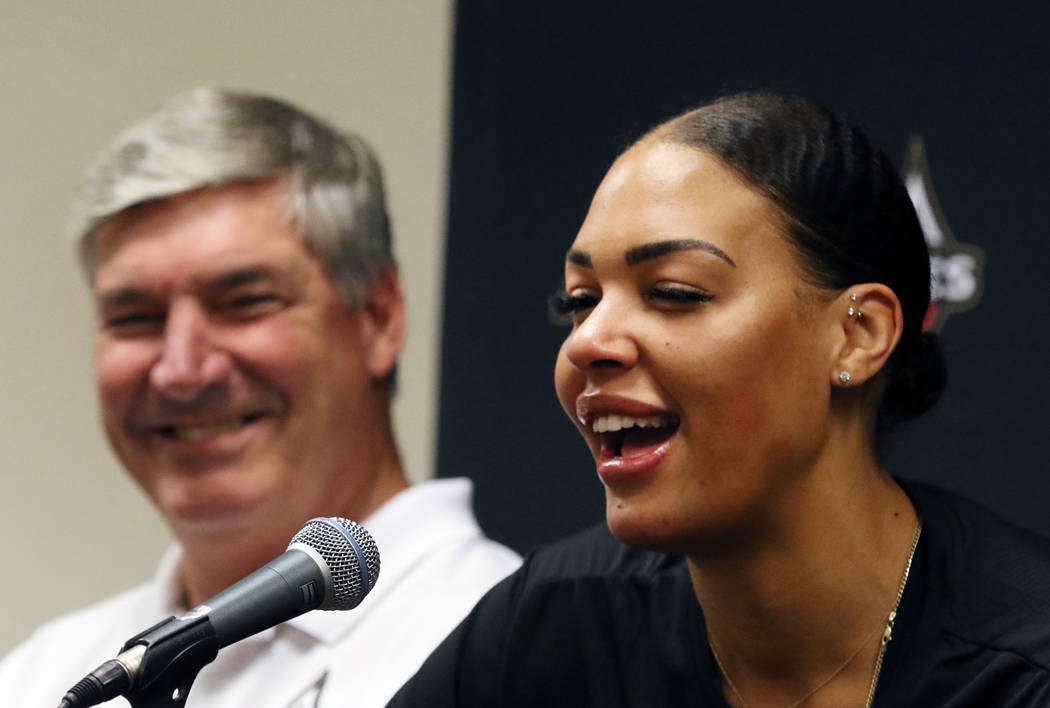 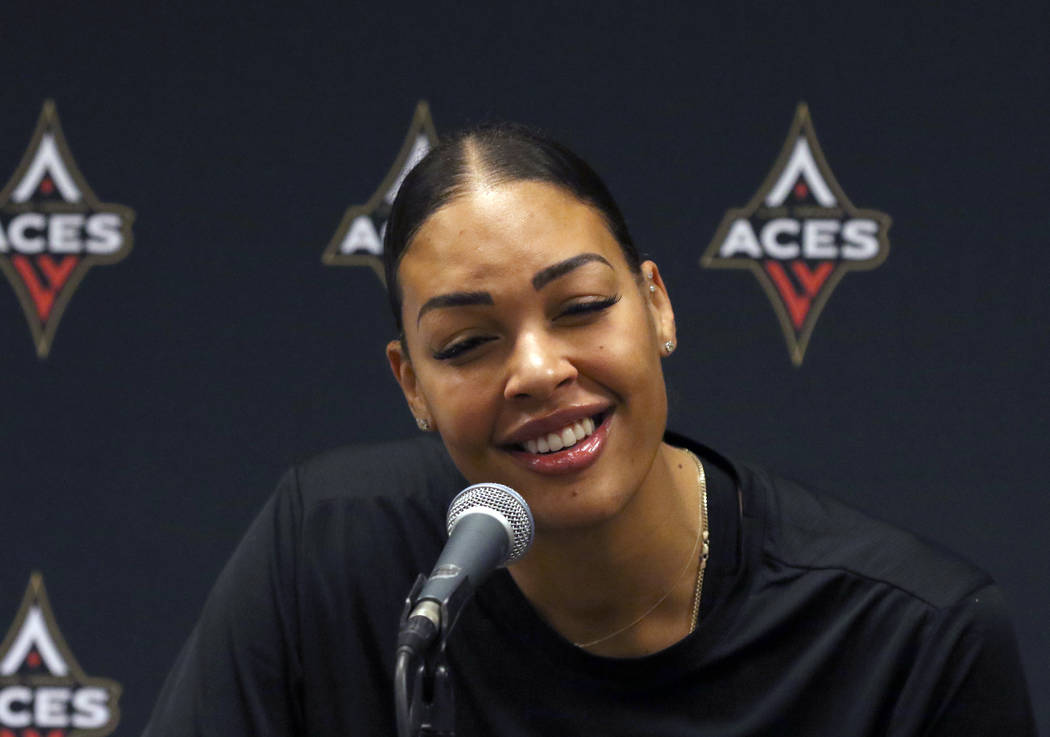 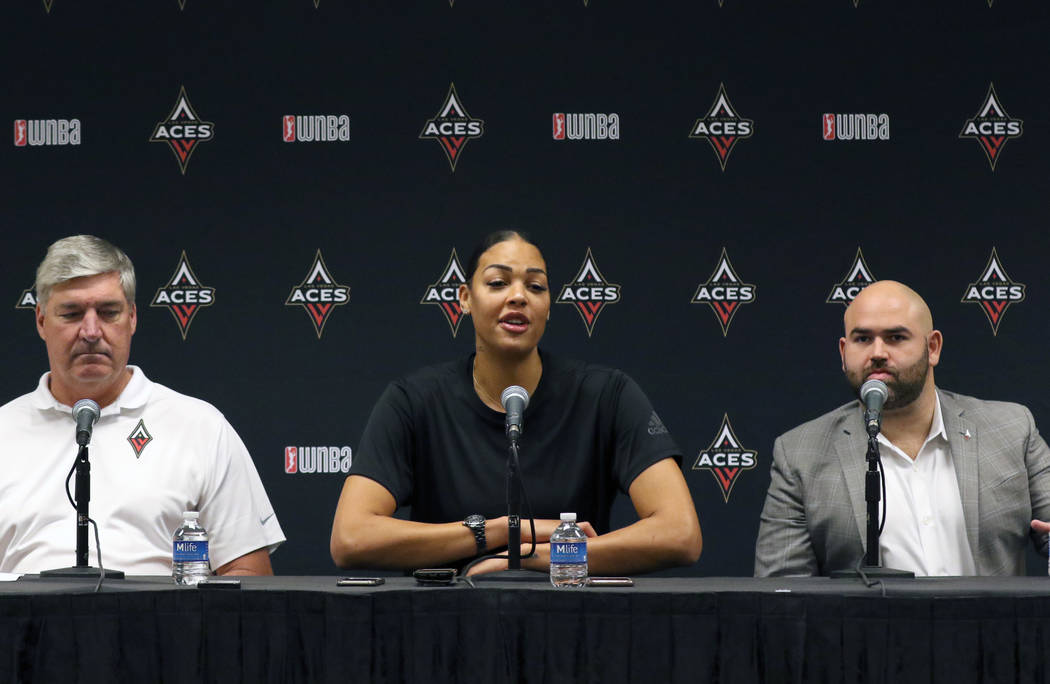 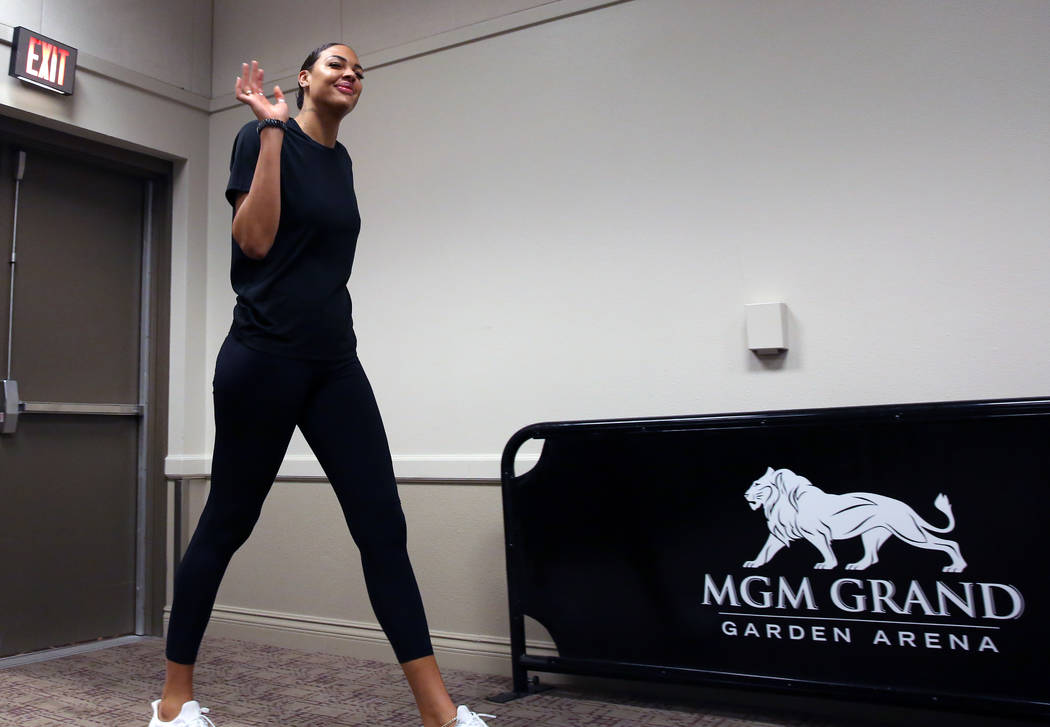 Liz Cambage, two-time All Star, and 2018 league MVP runner up, prepares to take the podium during a press conference at MGM Grand on Monday, May 20, 2019, in Las Vegas. Aces acquired Cambage from the Dallas Wings. Bizuayehu Tesfaye Las Vegas Review-Journal @bizutesfaye

The obvious: I’m all in for news conferences.

Bill Laimbeer has been one of the best things going (yeah, I know, A’ja Wilson is pretty good, too) for the Aces since the WNBA franchise moved to Las Vegas last year.

Laimbeer brought instant name recognition, is an NBA champion two times over, owns a resume defined by clout and — get this, head coaches at all levels — doesn’t believe saying what’s on his mind is against the rules.

He might have also met his match when it comes to unabashed frankness.

Which means this actually might work out really well … or not and yet still make for memorable sound bites.

Liz Cambage is officially in the fold for the Aces, one of the world’s best players having arrived from Dallas via trade and introduced at a news conference Monday at MGM Grand Garden Arena.

The center is expected to practice with the Aces on Tuesday and the team opens its season Sunday against Los Angeles at Mandalay Bay Events Center, Cambage having not played since September while recovering from an Achilles issue.

She’s also its most outspoken one, among WNBA leaders in technical fouls last season.

And yet she still trails her new coach by more than 110 in that category.

A match made in vocal heaven?

“We’re two of the same people,” said Laimbeer, he of “Bad Boys” fame with the Pistons. “I don’t know if that’s good or bad, but I look forward to this.”

Cambage is the WNBA’s best example of what other sports already know, that when an athlete owns more leverage than his or her employer and demands a trade, it almost always works out for the player. Few have such juice. The ones who do often get their way.

It’s not a question of whether such individual power is good or bad for the WNBA. It’s just the reality of business. Cambage once sat out four seasons and instead competed abroad due to her issues with the league, so those in Dallas understood not to take lightly her threat of not playing this year if denied a trade.

“The WNBA is still evolving and, right now, players are beating their chests and making noise that it should be about them more than it has been in the past,” Laimbeer said. “I agree with that. I’ve always been outspoken for players. I was a player.

Emotion found Cambage on Monday when she began recounting her WNBA career and the problems she had with being drafted second overall by Tulsa in 2011, saying she wasn’t nurtured and cared for well enough, frustrations that resurfaced when she returned to the league and signed a multiyear contract with Dallas in 2018.

Look. In one way, that’s life. Not everyone falls in love with the franchise and town in which they are drafted. But that’s the system. Most make it work until they have played long enough to earn a status of free agency that allows them to move on.

Only she and those closest to her understand what led to Cambage leaving the WNBA for so long and now orchestrating this trade. She has certainly been an advocate for change, fighting for higher salaries and better facilities and playing conditions, for marketing the league’s stars at a higher rate and offering more sensible travel.

Much of those concerns led to players opting out of the current collective bargaining agreement following this season, and you can bet the new Aces star will have her opinions known when serious negotiations on a new deal begin.

“I’m not crying because I have been through stuff,” Cambage said through tears Monday. “Everyone has been through stuff. I just get frustrated that I look back on my career and many people say so many things about me — she’s a diva, she’s this, she’s that — and at the end of the day, I’m just a person who wants to be comfortable and respected in the job that I’m doing.

“I speak my truth and live my truth. I’m just really happy to now be with an organization that really looks after and cares about its players. It’s an honor to be part of this team.”

Well, it certainly won’t be boring.